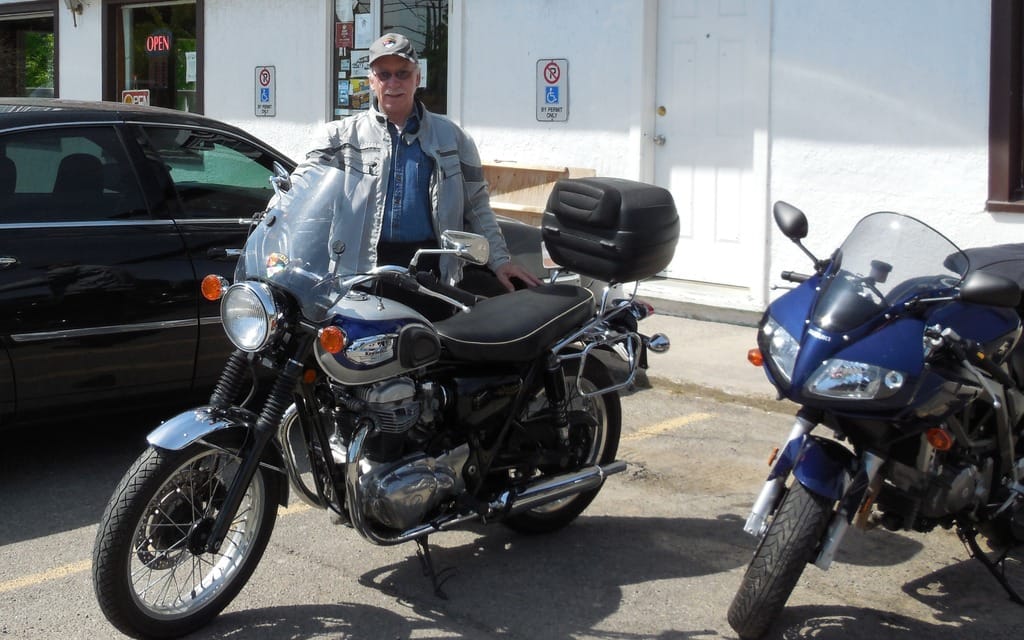 Do more with less

We’ve become a society of specialization. We need (or believe we need) certain shoes to go running, a certain bicycle to go biking. Doing the occasional track day? Get the up-spec RR model. Going on a long trip once a summer? Get a fully loaded luxury tourer. Motorcycle rags willfully perpetuate these perceptions. Thankfully, not everyone listens.

Chris Spence has over 125,000 km on a 2000 Kawasaki W650 (some kind of record, we think). His bike has no fairing or stereo system, no bank of buttons to turn on a heated seat or to adjust the suspension. All he’s added to the bare bones retro standard is a Spitfire windshield and a set of Givi luggage — and yet he’s covered more kilometres than almost all of us. The gall. And of all bikes, why a retro Kawasaki?

One review was all it took. He read an article in the July 1999 issue of Motorcycle Sport & Leisure and was sold on the W650. “The reviewer talked about the sheer pleasure of riding this bike on back roads, and that’s what I love,” Spence says. That December he picked up a new W650 for $8,500 from Niagara Race Crafters, a dealership near his home in St. Catharines, Ontario. He hasn’t regretted it.

There have been other bikes over the years. The 66-year-old is originally from London, England, and his first riding experience was British. “It was in the early ’60s on the back of a BSA Super Rocket,” he says. “The fella told me we did 100 mph.” He took his road test on an Ariel Leader and had a chopped ’53 BSA single in high school. He came to Canada in 1965 and life (marriage, children, career) took precedence over motorcycling. In 1989 he got back into riding with an ’86 Yamaha Maxim. Then there was The Encounter. “A Norton Commando pulled up beside me at a stop sign. I thought, ‘I need to get a twin.’”

Spence was familiar with British bikes. “If anyone should’ve bought a Triumph, it should’ve been me.” But at the turn of the century Triumph’s neo-retro Bonneville twin didn’t exist. “I knew Triumph was coming out with the Bonneville, but reading that review and getting a great deal, I decided to go with the Kawasaki.”

It’s not a Brit-bike, but near enough — and that’s the intention. The W650 is based on Kawasaki’s W1, W2, and W3 models (produced between 1965 and 1975), which, in turn, trace their lineage back to the Meguro K, a licenced copy of BSA’s A7. It’s a throwback to a Japanese copy of a British twin. Confused? You’re not alone. “People say, ‘Oh, look at that Triumph, or BSA,’” Spence says. “They’re astonished it’s a Kawasaki.”

They’re also surprised by the engine spec. Look closely at the mill and you’ll see a shaft-driven bevel-gear overhead camshaft — the same setup aficionados fawn over on ’70s Ducatis. Spence is no different. “I drooled over Ducati 450 singles,” he says. “I’m drawn to the mechanics and the engineering, so the gear-driven overhead-cam influenced me as well. I love the whole character and riding experience, which predominantly comes from the engine. It’s torquey, its power is linear, and it runs turbine-smooth at highway speeds.”

And ride he does. Spence is a member of the Retreads Motorcycle Club, and a lot of his mileage has come from attending rallies. There’s an Ontario rally every year, and an international one, too. He’s been to the Bluenose Rally in Nova Scotia, has ridden the Gaspé Peninsula, and done the Natchez Trace in the southeastern United States. He takes long trips and day-rides and every weekend toddles off for Sunday breakfast and a back-roads ride on the steadfast standard.

Think that much mileage would take an above-average toll on the mechanicals? Think again. “I’ve had no mechanical problems,” Spence says. His secret: maintain, maintain, maintain. He follows Kawasaki’s recommendations for regular tune-ups, valve adjustments, and oil changes. He’s gone through parts, of course — spark plugs, one valve cover gasket, a set of brakes, sprockets, three chains, a few batteries, and lots of tires. “It uses the slightest bit of oil now, but I’d say it’s within normal spec.” His lubricant of choice? Bel-Ray semi-synthetic.

Spence adores his W650, though it’s not faultless. The original retro-style Accolade tires felt vague and inconsistent, he says, and have been swapped for Bridgestone BT45s, “which completely transformed the feel and handling of the bike,” he says. And the seat “gets to you after a while — but I’m a stoical English bloke!”

Could the secret to living a happy high-mileage life be finding a bike you like — any bike — and just riding it? Any big trips planned for this summer? “Nothing really. Just the usual.” Which is more than most of us, then.