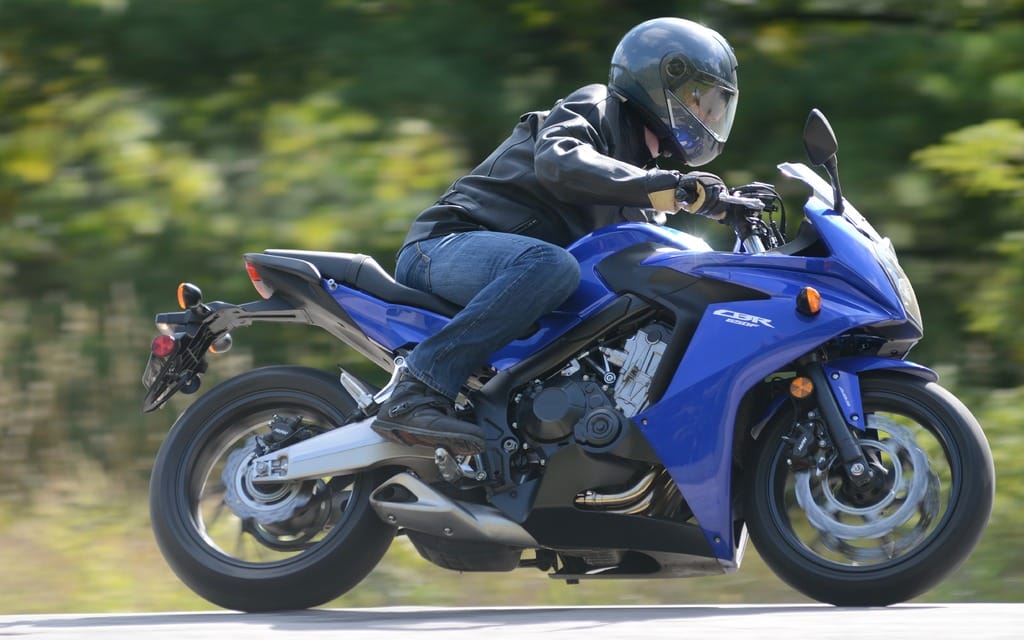 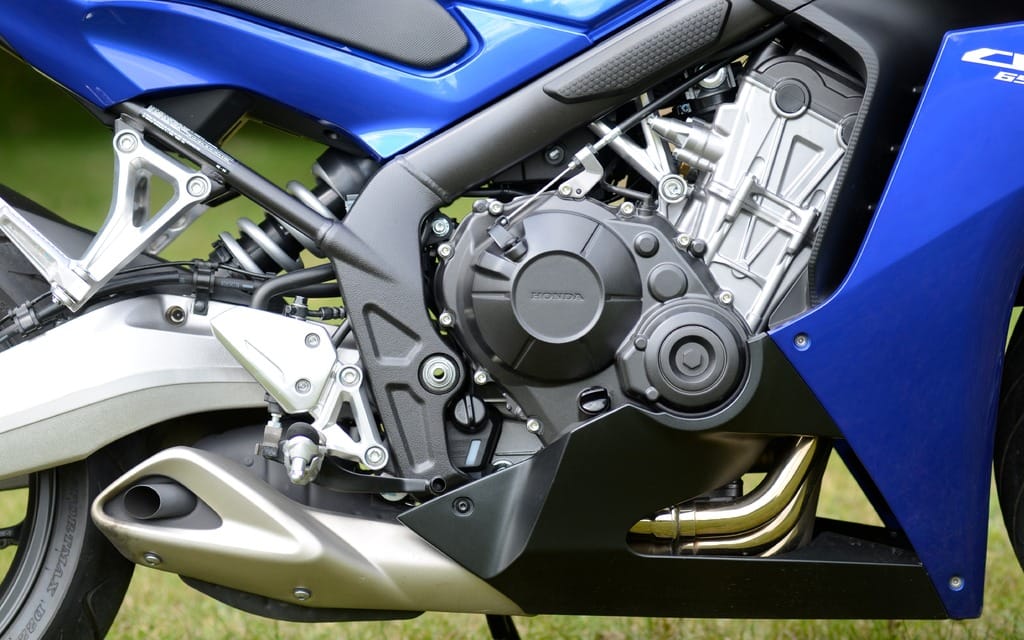 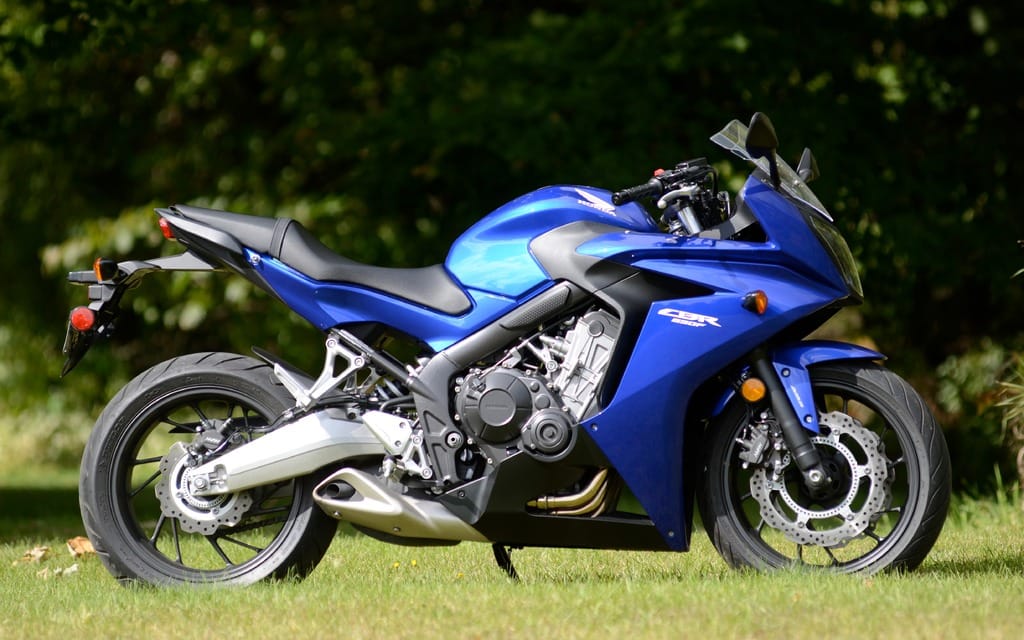 It’s fast, friendly, and forgiving – but is Honda’s CBR650F forgettable?

The Honda CBR650F is the V-Strom of sportbikes. Hear us out. The Honda doesn’t attempt too much, nor does it achieve too little. Its main attribute is that it doesn’t get in the way. That may sound like a negative (it’s hardly a positive) but, in the end, it likely doesn’t matter. Confused?

The motorcycling masses are fixated on two extremes: older enthusiasts (who consider fuel injection a frivolity) and younger ones (like sportbike enthusiasts who upgrade their Ninja every other year). And when a bike is all-new the latter salivate as soon as it’s unveiled and place orders before the wheels hit the showroom floor. But the 650 is not that kind of bike; despite its newness it hasn’t received much attention.

That’s not especially surprising given its credentials — there’s nothing remarkable on the spec sheet — and considering that it entered Honda’s lineup at the same time as the much-vaunted VFR800F, a bike that somehow managed to be new and old simultaneously. The 650 fills the hole in Honda’s sport lineup between the unassuming CBR500R and the high performance CBR600RR. (Manufacturers are fond — sometimes to a fault — of filling holes in their lineups. But, we wonder, does every hole need to be filled? Someone awaiting a colonoscopy may not think so.) “Accommodating go-between” sums up this CBR; it was designed to be friendly and fit in, not to be brash and stand out.

It starts with the engine, a 649 cc twin-cam inline four with, says Honda, a powerband that prioritizes “the low- and mid-speed ranges used most frequently for street riding, rather than the harder-edged attributes of a supersport.” After a spin on the 650, we say that’s spot on. This mill won’t wow you — it’s not a screamer like the CBR600RR’s — but it will send you forth at a fair clip (fast enough for James Nixon to almost get a speeding ticket). Acceleration is smooth and sporty, shifting slick, and fuelling flawless. And because of that broad torque curve, the 650 is forgiving, too. Power is steady down low. The bike lugs willingly through city streets in a manner alien to its middleweight supersport brethren and there’s a strong-enough pull to redline. (Some buzziness creeps in at higher revs, but the midrange is meaty enough that you don’t need to wring it out anyway — and if you do, that miniscule muffler emits a whiny howl like a Dyson vacuum.) Simply put, there are no surprises; the engine delivers as designed. (And old-timers and do-it-yourselfers rejoice! The oil filter is easily accessible on the undercarriage without having to remove any bodywork. Honda makes reference to this repeatedly.)

Handling, though a touch slow for the class, is hard to fault, especially considering the 650’s basic suspension specs. A twin-spar steel frame provides a solid chassis base and is mated to a 41 mm conventional fork and preload-adjustable monoshock. Though the fork isn’t adjustable, stock settings are solid; it’s firm and responsive, entirely adequate for sporty street riding. The setup holds the road and absorbs bumps well, even on an especially poor section of pavement selected for photographs. The bike’s 212 kg is distributed almost evenly front-to-rear, giving it a very balanced feel. Once turned in, steering is neutral and mid-corner corrections are readily accepted. It’s not the most dynamic sportbike on the market, but it’s planted, poised, and capable of the kind of riding most owners will get into.

And when the going gets quick it’s good to know a set of solid brakes has your back, backed by standard ABS. Dual front 320 mm wave-style rotors gripped by twin-piston calipers provide strong, controllable stopping power (a 240 mm disc sits at the rear). During our test ABS never kicks in, even under heavy braking, but, as always, its presence is reassuring.

Where the CBR650F excels — especially for those of us who aren’t jockey-sized — is comfort. Raised clip-ons make the seating position more upright than a pure sportbike’s, and the 650 is roomier than most between its pegs and 810-mm-high seat, which is firm yet comfortable enough for a day of sporty riding. The windshield provides a buffet-free flow by deflecting air to the chest, and our testers, though tall, can easily get into an aggressive tuck.

Controls are simple and straightforward, exactly what you’d expect from a no-frills bike. Likewise, the dash is clear and uncluttered, dual digital displays offering a legible spread of information (speedo and tach on the left; odo, trips, clock, fuel gauge, and fuel consumption figures on the right). The design is clean and effective, albeit a bit bland. The same can be said of its styling in general. Its aesthetic, though passable, lacks something; it doesn’t look bad, but it’s a bit frumpy.

Design direction was supplied by a “young team” of engineers, a press release states. Was their inclusion an attempt to infuse some attitude into the end result? If so, this is what they came up with? Is the younger generation really so conservative? Though let’s not fault them for failing to rock the boat; most millennials are just happy to have jobs, and a too-radical design might’ve provoked pink slips. Honda says this is a “sports-oriented bike, usable and enjoyable in the real world by riders of all backgrounds and experience,” and one that “appeals to your practical side.” Be still our beating hearts.

The CBR650F is a fine performer, but in the end it leaves us lukewarm. It’s entirely competent, yet falls short of inspiring — but that shouldn’t dissuade you from considering it. Motorcycle journalists are spoiled and over-stimulated brats. We ride everything, and for a bike to really rise above the cacophony it needs to be either especially good or fatally flawed — not being noteworthy is a ticket to anonymity. If you’re looking for a sporty all-rounder, something that’s comfortable and can make compromises, pull commuting duty during the week and tear up back roads on the weekend, this may be the bike for you. It’s fast, friendly, forgiving, and, perhaps most importantly, it’s affordable. At $9,499, the CBR650F falls under the magical $10,000 mark, putting it within reach of most riders. Will the public embrace this practical machine? They did for a similarly unassuming Suzuki, which should give the kids at Honda hope.

For more information on the Honda CBR650F, click here.