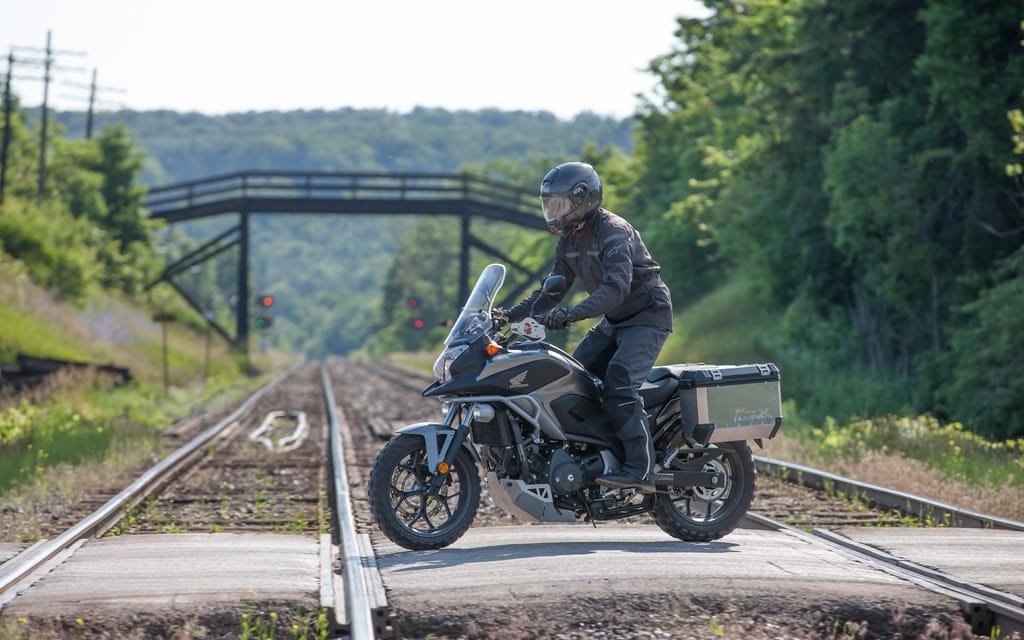 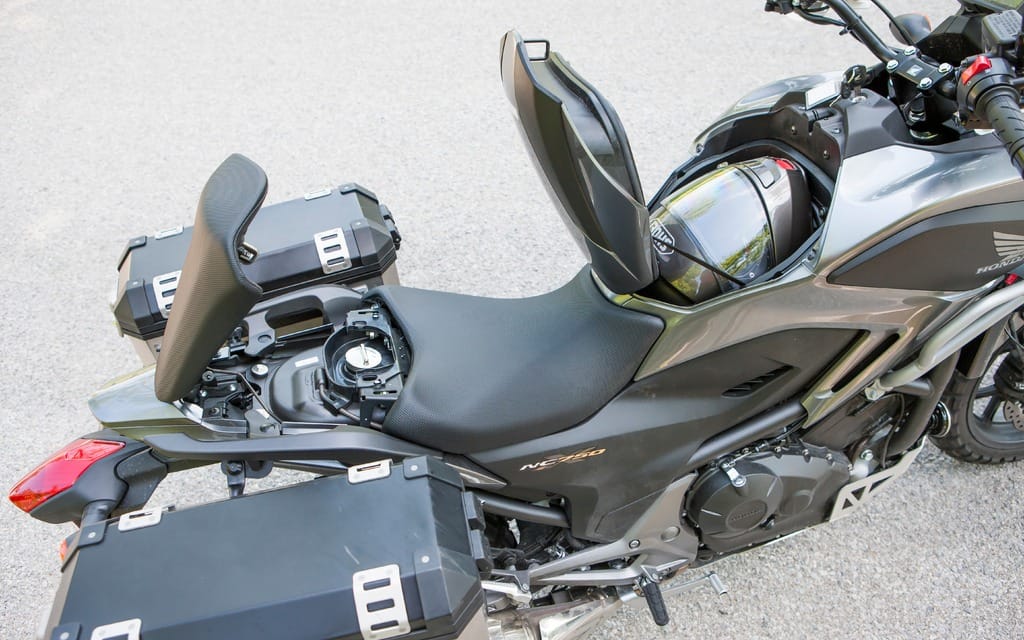 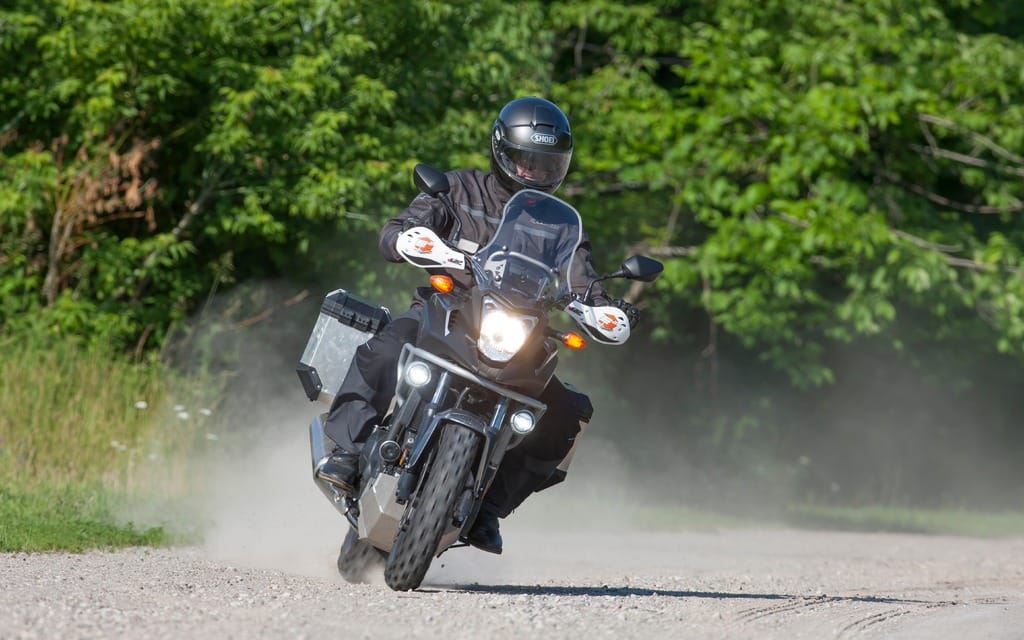 When a man is moved, the simple motorcycle review simply won’t do

The plume of dirt is settling on the tobacco leaves in the adjacent field. I’m sweating now, so I stop and peel off another layer and jam it in the storage bin that sits where a motorcycle’s fuel tank normally would. Then I feel a wave of tiredness overcoming me and sink to one elbow before collapsing completely on my opened and overturned jacket. I awake some time later — how much later I don’t know — and crawl to a saddlebag and retrieve a bottle of water. I also find an apple, a flattened banana, six energy bars, a spare visor, a pair of winter gloves (what was I thinking?) and a GPS unit that’s still in its cardboard box. I smile — I won’t have to rejoin civilization anytime soon.

You’re looking at it. You’re looking at the machine that I enjoyed more than any other from the summer that was. On the day above I cow-poked on the dirt roads that hem southwestern Ontario tobacco fields, and then, when the urge overtook me, I’d occasionally rip down the most deserted of them with the throttle to the stop. And then I decided to ride across a stream so that I could get to a deserted beach alongside Lake Erie. I successfully made it across but then lost my footing on the other side and — while stationary — crashed spectacularly. I landed on top of the bike with both arms rammed down between the fork and the frame and with my forehead resting on the front wheel. I am at a loss to explain how a foot losing traction could lead to so improbable a position, but anyone who’s lost footing in a slick shower after a drink or two could sympathize.

This motorcycle, this Honda NC750X, has so rattled my preconceptions about motorcycles that I’m tempted to rule the last 11 years of my working life — my time here at Cycle Canada — as an utter waste of time — for me and for you. It is a realization that has compelled me to re-examine the entire validity of the reviewing process.

Reviewing anything, really, is a mug’s game. The act of professionally casting an opinion is based on a belief that we have universally held beliefs. But is that true? Don’t some people drink antifreeze? And I’ve seen people drink Coors Light and Tim Hortons coffee, two beverages that I don’t deem worthy of the cup they arrive in. I think the Suzuki M109R among the ugliest motorcycles ever made. But I’ve Ducati and Aprilia and GSX-R riding friends that tell me they think that it’s so beautiful that they’re contemplating the purchase of one despite the fact that they have no interest in cruisers. How can that be? How can my honed-on-hardened-steel view of art and design and music and culture have failed me so terribly?

I first rode the Honda NC in Spain. There is a reason that bike makers ship magazine hacks to Spain. The roads are great, and the food, too. The culture is sublime, and the women (and men, too) on the streets of the major cities dress exquisitely, smell wonderful, and, if they think you worthy, flatter you with direct gazes and warm smiles that make the knees buckle. And the NC, in this environment, was an OK motorcycle. But I’d have swapped it in a heartbeat for my 916, with its howling exhaust and razor-sharp feedback. And don’t give me that thicker-seat-foam argument that the Honda would have been more comfortable at day’s end. Seat foam? Life is short and suffused with strife and you’re willing to swap out a superbike’s shot of adrenaline for the comfort of your ass? Nonsense.

And, in a mechanical sense, this NC750X is pretty much like the NC back in Spain. But my response to it isn’t. And it was immediate. As soon as I straddled it and rode away I knew there was something here to love. It felt familiar in that Honda way, but not the contemptuously familiar way of a love affair gone dead. The Honda had the wonderfully familiar feel of a 20-season-old baseball glove or the finely engineered feel of my Gaggia espresso machine. All this from a budget ($9,199) machine.

I love my 916. And I can tell you, in expensive and excruciating detail, about all of its failings. But its failings do not make it a failure, any more than my failings (as a father, a partner, or a friend) make me a failure. And here I am, on a rare Saturday to myself, where I can ride my 916, but instead I choose the Honda. The Honda! This has happened exactly twice before, once to an Aprilia Tuono and the other time to a Ducati Panigale.

And that Saturday is the day I write about off the top. A wonderful day on a bike, one of my best ever. The Honda had something to do with it, but how much, or how exactly it had something to do with it, I can’t say. And that is my failure as a reviewer, because no discussion of throttle response or braking performance or any other quantifiable way in which the Honda can be judged can begin to account for my feelings. The only thing I can say with surety is that the Honda is mediocre in nearly every way. That braking? So-so. Exhaust note? Nothing special. Power? Enough, nothing more. But added together these characteristics equate to a sublime motorcycle. Just don’t ask me to tell you how.