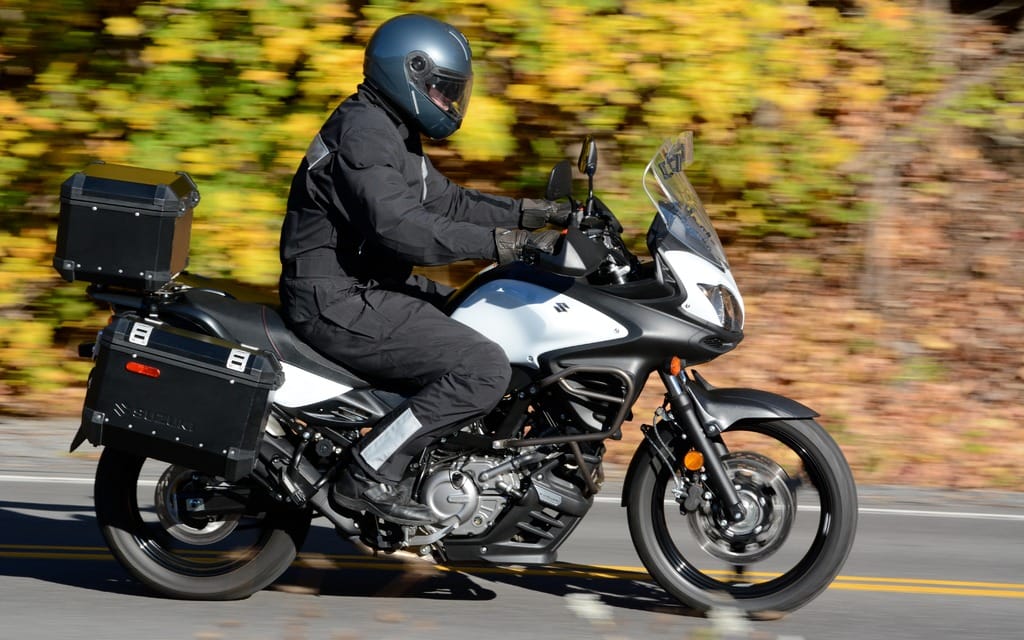 The benefits of spending less on Suzuki’s V-Strom 650

Paul Bremner is a Cycle Canada contributor, and an odd one — for a motorcycle magazine — at that. He didn’t grow up with motorcycles, but came to them as an adult. He isn’t, like so many of you, a gear head; he’s more of an iPhone head, more into blogging than flogging a torque wrench. I think of Paul as very much a person of this still-new century — while many enthusiasts are still dragging their tails out of the last one. That Paul owns a 650 V-Strom is perfectly logical. Paul wants from a motorcycle a vehicle that can get on the road, get up to speed, and get him (and occasionally his wife Lana) the hell out of town.

Motorcycling is no different than other pursuits in that the machinery can take on an outsized role in our appreciation of it. Mediocre players own vintage Les Paul guitars and pot-bellied riders go round the block on exquisite Cervelo bicycles that cost as much as a good used car. Is this necessary? No. But we like nice things, don’t we? James Nixon loves the mellow chortle of his BMW, and I like the bellow of my Ducati. But the point is that motorcycles suffused (or over-suffused) with character are not necessary for the appreciation of motorcycling. Paul knows this. Nixon and I are trying to understand it.

Compared to the other two bikes on the Fall Tour – a BMW R1200RT and Triumph Tiger Explorer XC – the V-Strom is cheaper by magnitudes. And it’s instantly noticeable. Its 90-degree 645 cc V-twin doesn’t have the stoplight jump of the Triumph or the BMW. And it’s obvious; at highway speeds it’s working harder than the other two. And yet if you’re not racing, what’s a few seconds? Once you’re up to speed — and that can be a decent speed, too (at times we maintain 140 km/h on the interstate) – it’ll sail right along. For a motorcyclist weaned on powerful machines, it’s important to view the V-Strom in the right context. Motorcycles are (gleefully) overpowered — a fast car (that doesn’t cost as much as a house) accelerates to 100 km/h at a rate slower than a Suzuki GS500. And a fast bike on acceleration shames a supercar that costs as much as a house. The V-Strom, compared with most users of the road, has more than sufficient get-up-and-go. (And next to a Prius it’s a rocket.)

What really makes the V-Strom stellar is — let’s face it — the price. At the time of this writing, remaining 2014 models were advertised on Suzuki’s website at $9,899, a cool $1,000 less than its already-sensible regular price. And that’s with spacious panniers and a top case already installed. The fly in the ointment of this brilliant bargain is the lock for the cases. The key fits as precisely as a bottle of wine in a bucket of ice and if you’re in a hurry to open a lid, forget it. Freeing the contents of the bags requires copious time for jiggling the key and cursing the person(s) who let it leave the factory like this. Had it been our bike we’d have disassembled the lock and jury-rigged an alternate closing mechanism out of a bungee cord, a paper clip, a stick of gum and an expired library card.

But, once opened, what capacity. Where once we ridiculed motorcycles with top boxes because we thought only personal-hygiene-obsessed men (some of whom have been known to travel with hair dryers) used them to over-pack for underwhelming adventures, now we see it in a different light. The top box is a brilliant addition to any motorcycle because its broad but shallow configuration allows heavier gloves or tinted visors or a date night’s worth of sushi to be accessed with ease. It also bolsters capacity without adding width, which is as valuable when you’re scything through traffic as it is when you’re squeezing the bike between a car and the garage wall.

Aside from having less power than its twice-as-expensive Fall Tour combatants, the V-Strom reveals its budget roots in its suspension. The fork is adequately sprung but under-damped, and the shock is at the limit of its tolerance when it’s loaded with hair dryers and combs and curling irons and a full-sized man. The handlebar position is odd, too, and places the hands close together and close, too, to the rider’s chest, resulting in a riding position that emulates a rowing machine at full extension.

Yet — and this is where we’ve been headed all along — none of the above matters that much. That wonderful road that swung hard to the right and to the left like a snake in fast retreat was just as curvy on the V-Strom as it was on the BMW. And while the V-Strom doesn’t have the BMW’s astounding fairing, the pivoting deflector on the upper lip of the V-Strom’s windshield usefully modulates the flow of wind up and over the head of even a tall rider. And where the Triumph had so much legroom that the only way to improve upon it would be to collapse upon the sofa, the V-Strom didn’t overly tax the knees as the kilometres accumulated.

Where the tables are turned — vs. the Triumph and BMW — is when the price is calculated into the equation, and this is where Paul Bremner has it all over those of us who crave more rarefied hardware. What can you do with the $10,000 saved by buying this bike and not one of the other two? Is it the difference between a week in Pennsylvania and an epic trip out West? And if you’ve gone west, could the money saved fund a month in Central America? Sometimes it’s not the money you spend that’s important, but rather it’s what you do with the money that remains.