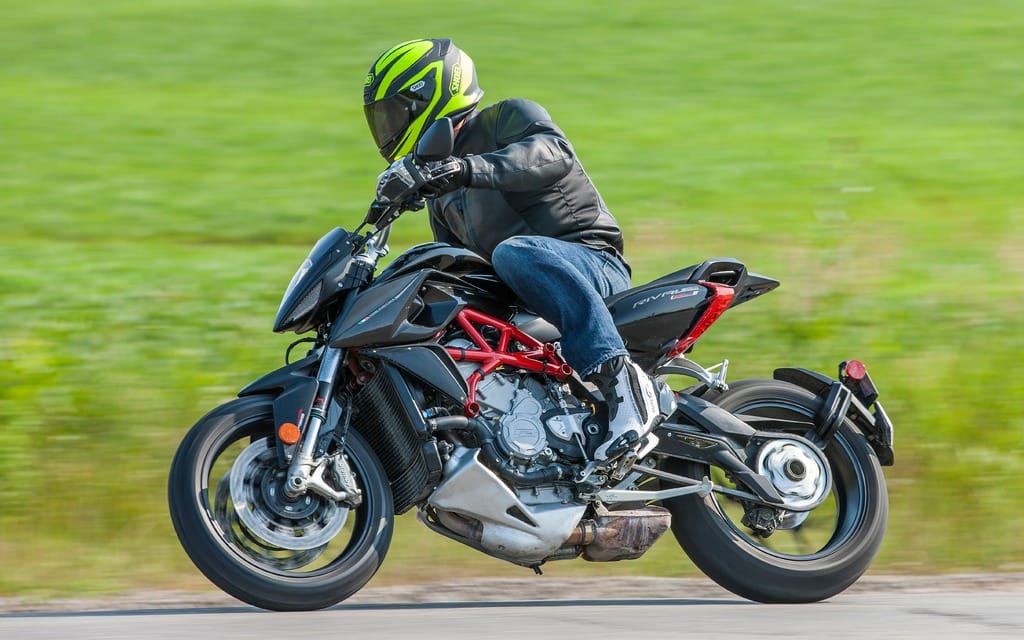 Fly in the Ointment

Imagine this: straddling a 100-plus horsepower stepladder in the rain on Quebec roads where grass grows freely from stretch marks in the tarmac. When you don’t know where you’re going. My first moments on my second-ever ride on MV Agusta’s Rivale stand in sharp relief to my first experience on the bike: in the verdant mountains in the south of France. (Oh, the south of France, with its roads that dip and weave and circle around like strands of pasta in a bowl. But that was then.) Back to the stepladder — I mean the Rivale.

The Rivale is a supermoto. Except it’s not, really. It’s supermoto-inspired. And since supermoto bikes are motocrossers with slicks, the Rivale’s riding position is like a motocrosser, but one with a fire-breathing 800 cc three- cylinder engine that is one of the most dramatic, potent, and spine tingling in all of motorcycling. But the riding position that works so well for an MX bike results in an odd sensation for the street. Because you’re up high on the bike, the machinery disappears beneath as you hurtle through space, as if you’ve been slotted into a Baby Buddha carrier on the chest of a mother with 250-km/h capabilities.

MV Agusta, with production of fewer than 10,000 motorcycles annually, is a very small company. (Ducati is close to 50,000, itself half that of what KTM or BMW sell.) That MVs are as good as they are is testament to the capabilities of the engineers and designers. But they’re so close to being truly great motorcycles that their shortcomings can be doubly frustrating.

With a flat spot down low that rivals the Plains of Abraham, at first I believed the Rivale was running out of gas. But as soon as 5,000 rpm is breached the bike pulls with remarkable and relentless force. There seem to be no discernable peaks or valleys in the powerband, just a steeply raked line soaring up. Also bothersome was the Rivale’s tendency to hunt at steady throttle openings. MV has made great strides in its fuelling, but they’re not at the level of major OEMs — yet.

Highway droning on a motorcycle is a part of life — just not the good part. Once we exit Highway 401 and cut north of Kingston on road 10, the Rivale (and the Dragster, too) come into their own. Aggressive use of the throttles and the brakes dovetail with the firm suspensions to make the MVs supremely capable secondary-road machines. In this environment the 800 cc engine is near perfection, as the revs never sink below 5,000 rpm and the throttle is never held steady. I pass a line of cars going uphill in top gear without a downshift. Used in this manner, the MV triple is easily one of the great engines in motorcycling.

It’s no secret that introducing a new motorcycle in tough economic times into a marketplace saturated with excellent machines is extremely difficult. MV, as a brand, isn’t out of the woods yet, but if forthcoming machines — like the already announced Turismo Veloce — add refinement to their brio, they’ve got more than a fighting chance.