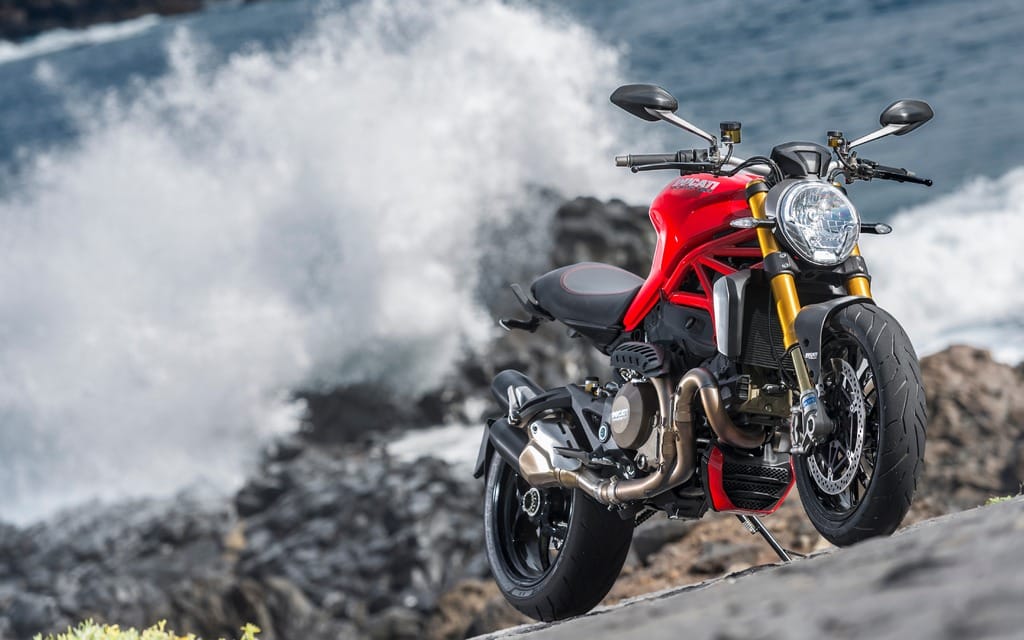 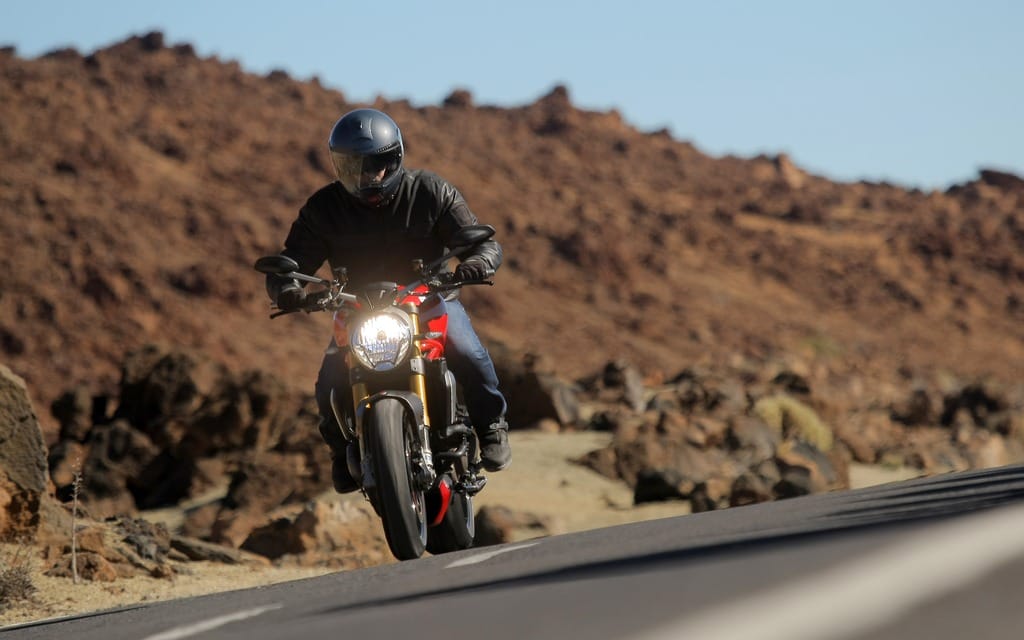 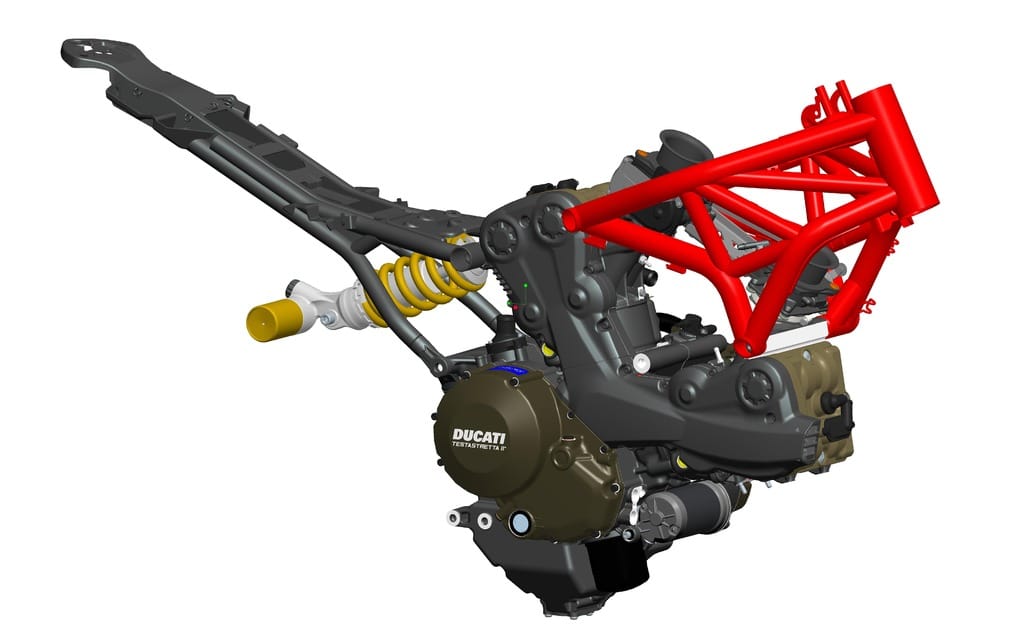 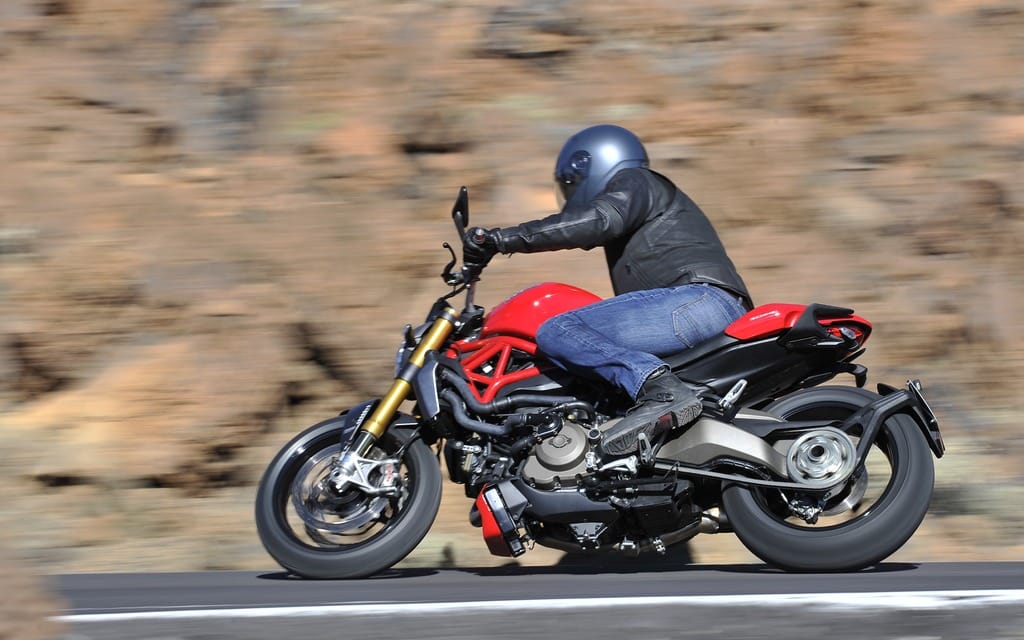 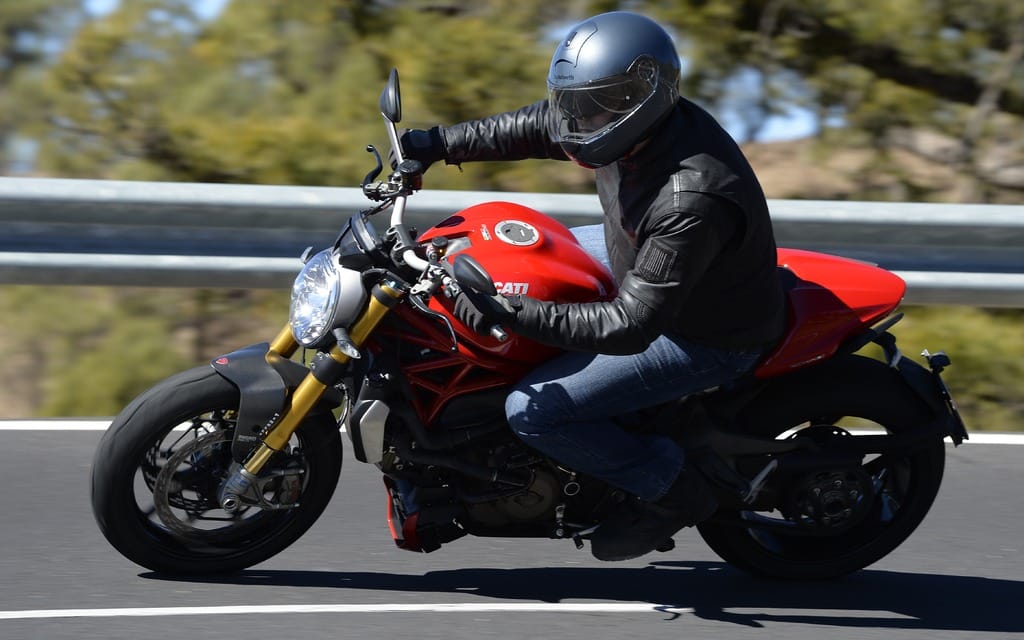 The rain in Spain falls mainly on the mainland, so Ducati chose the Canary Islands – Tenerife in particular – to introduce its newest Monster at a recent press launch. The weather was nice, but the Monster 1200 was nicer.

What’s the difference? Both use the same 1,198 cc Testastretta 11-degree water-cooled twin-sparkplug V-twin, though in the S version it’s modified to produce an additional 10 horses for a claimed 145. The S also gets Öhlins suspension, a carbon fibre front mudguard and Y-shaped three-spoke machined rims (10-spoke hoops for the base model).

The engine is the same mill that powers the Multistrada and Diavel, though retuned to produce a broader torque curve in the Monster 1200, especially further down in the rev range. Front and rear steel trellis subframes attach directly to the engine, as does the shock, which bolts onto the rear cylinder.

The base model receives a Sachs monoshock, adjustable for preload and rebound, paired with a fully adjustable 43 mm Kayaba fork to keep the ride smooth. Brakes differ slightly for each bike but are essentially race spec (the S borrows its front brake from the Panigale). It’s Brembo all around; for the base model, dual 320 mm rotors and Monobloc M4-32 four-piston calipers up front, a 245 mm disc with two-piston caliper at the rear. The S shares the same rear brake setup, though up front it sports bigger 330 mm discs and M50 four-piston calipers. ABS is standard.

For fit and feel, the Monster 1200S gets high marks. Admittedly, extended periods weren’t spent in the saddle, but in my brief experience the two-up seat is comfortable. It’s also adjustable between two positions (785/810 mm). I left it in the high position, and though the fit for my six-foot-two-inch frame was snug, it wasn’t uncomfortably so. Seating position is not quite upright, bars are wide and grips fall readily to hand. Controls are simple and easy to operate, and the TFT colour instrument display is very well done. It’s easy to read, provides a variety of information (customizable by the rider), and has a neat trick of changing colour combinations depending on lighting conditions (black on white in bright light, white on black in low light). One thing that’s missing, though it’s not a necessity, is a gear position indicator.

The Monster 1200 and 1200S feature three riding modes (Sport, Touring and Urban), and acceleration in Sport mode on the S is impressive. The front end lifts up readily, if you’re into that kind of thing – sometimes even if you’re not. In Touring mode, which I spent much of the day in, it’s still possible to get some air under the front tire. In Urban, however, the Monster 1200S becomes almost civilized (“almost” being the operative word). Power delivery is smoothed out, though the bike looses none of its visceral appeal – a wolf-like snarl, no matter what mode you’re in. Eight-level traction control (standard) ensures things don’t get too out of hand. Shifting through the six-speed gearbox is positive and precise, and fuelling, which comes via a ride-by-wire Mikuni fuel injection system, is incredibly smooth. The Monster 1200S handled the hairpins and blind corners of Tenerife’s mountain roads with ease. In fact, this bike is as forgiving as it is fast, allowing mid-corner adjustments to be made readily (even by a rider who hasn’t ridden in several months).