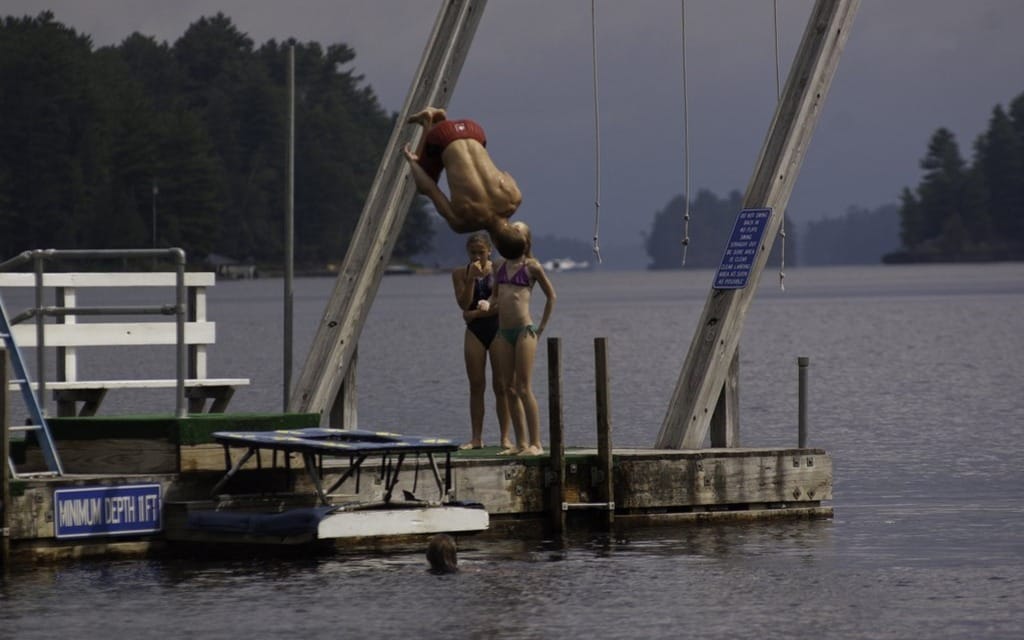 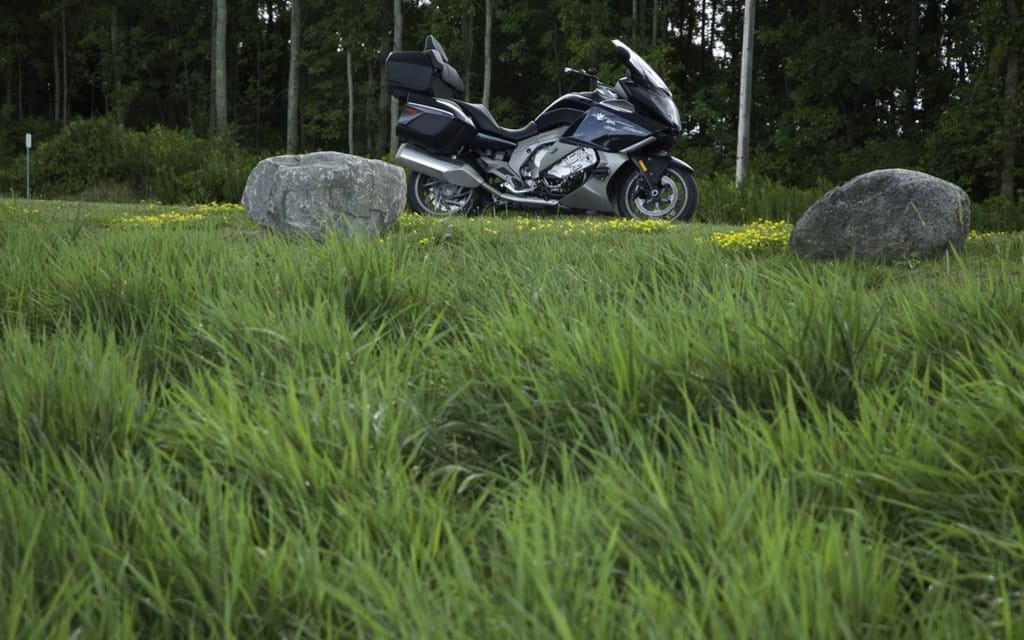 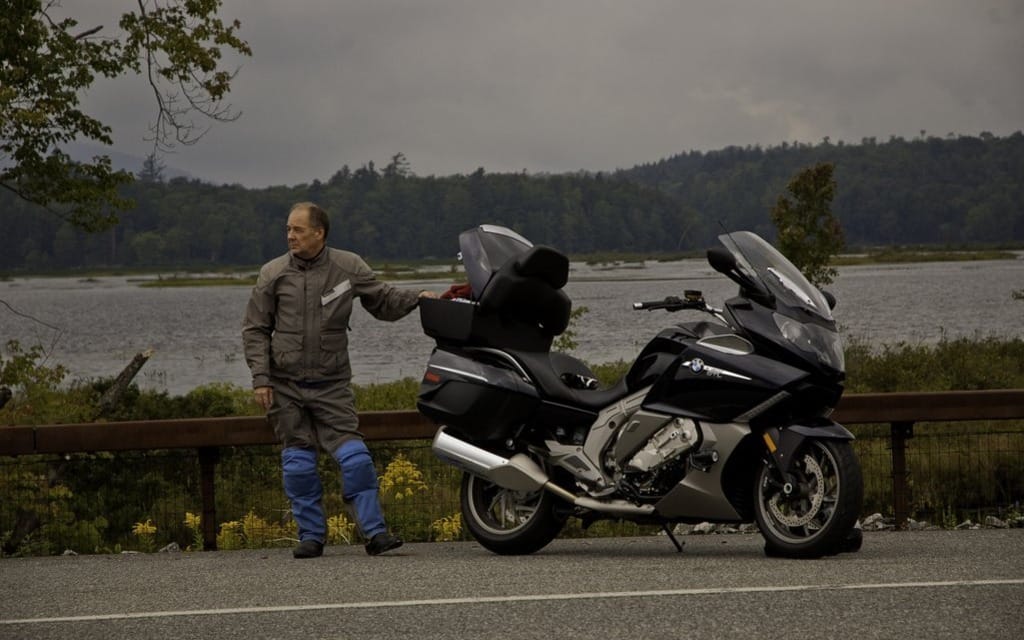 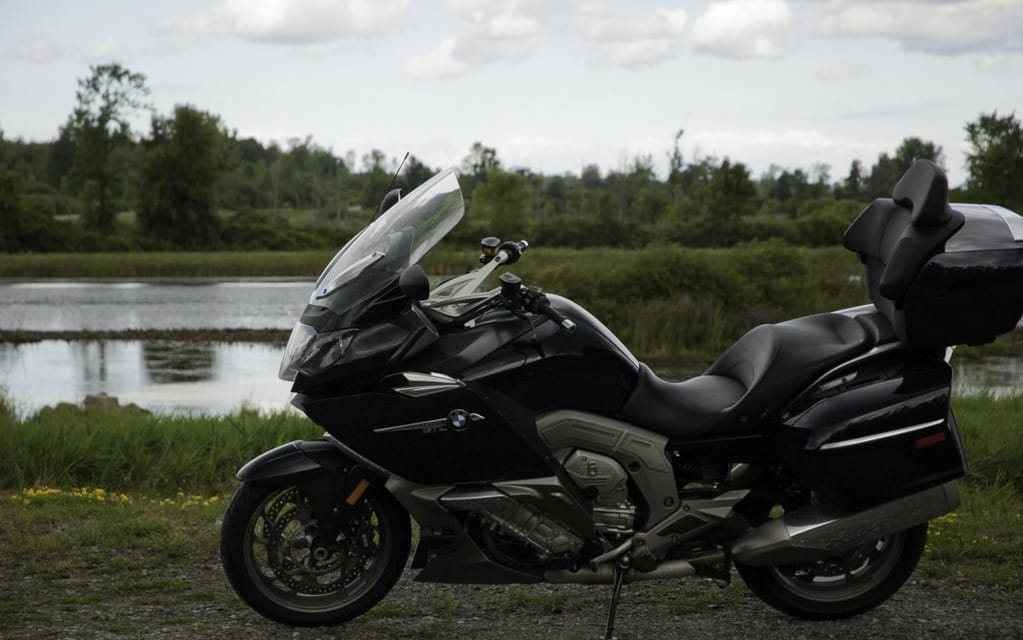 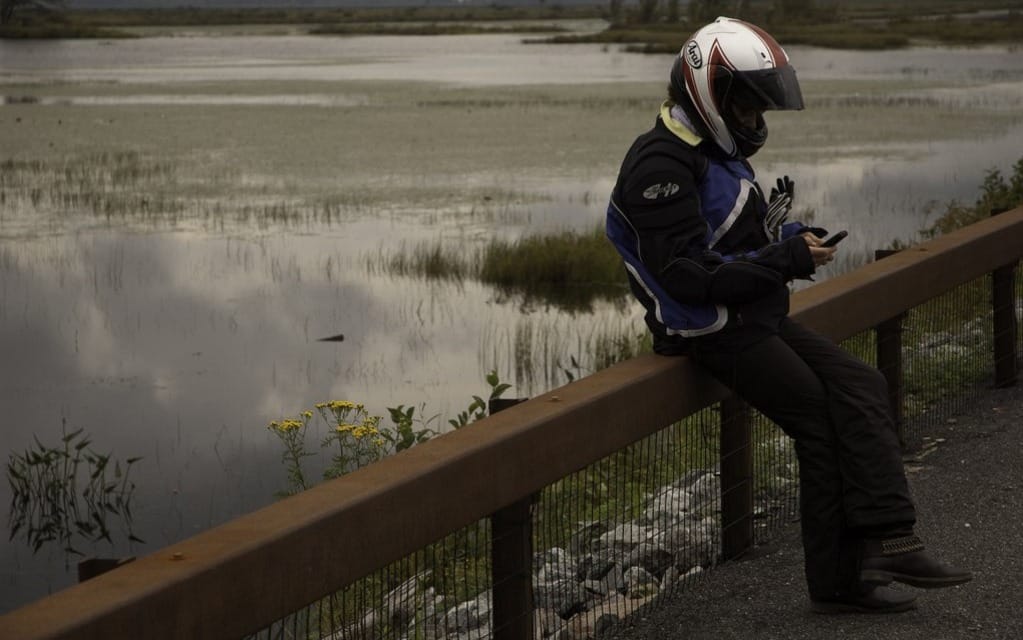 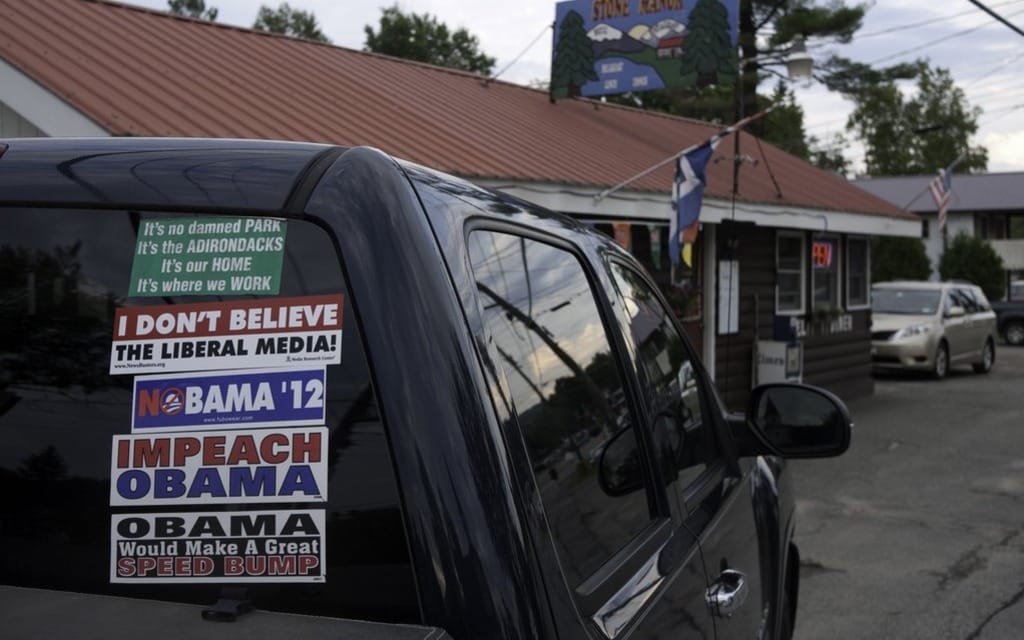 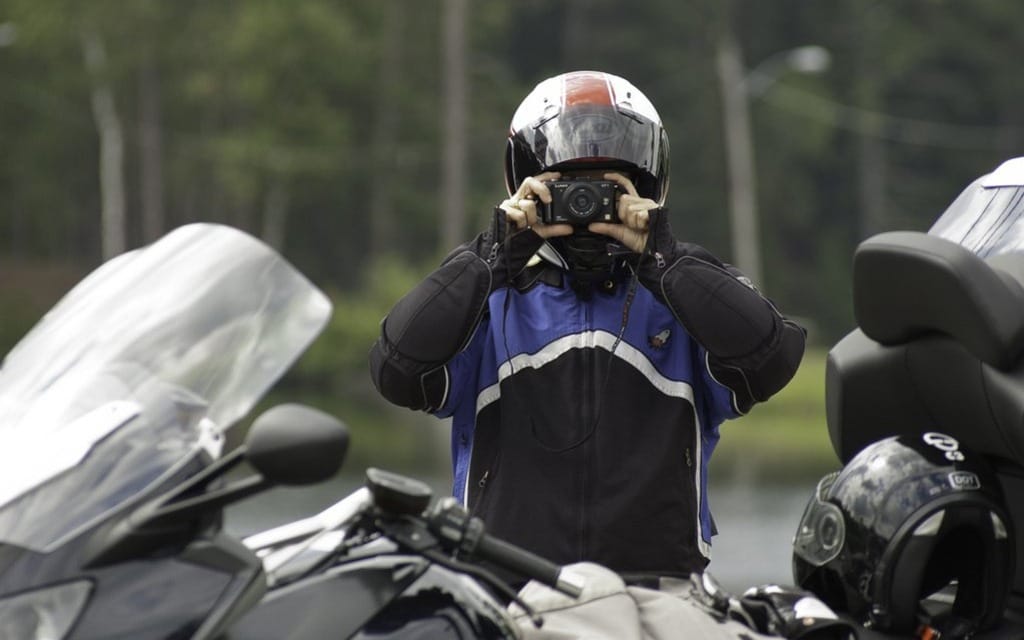 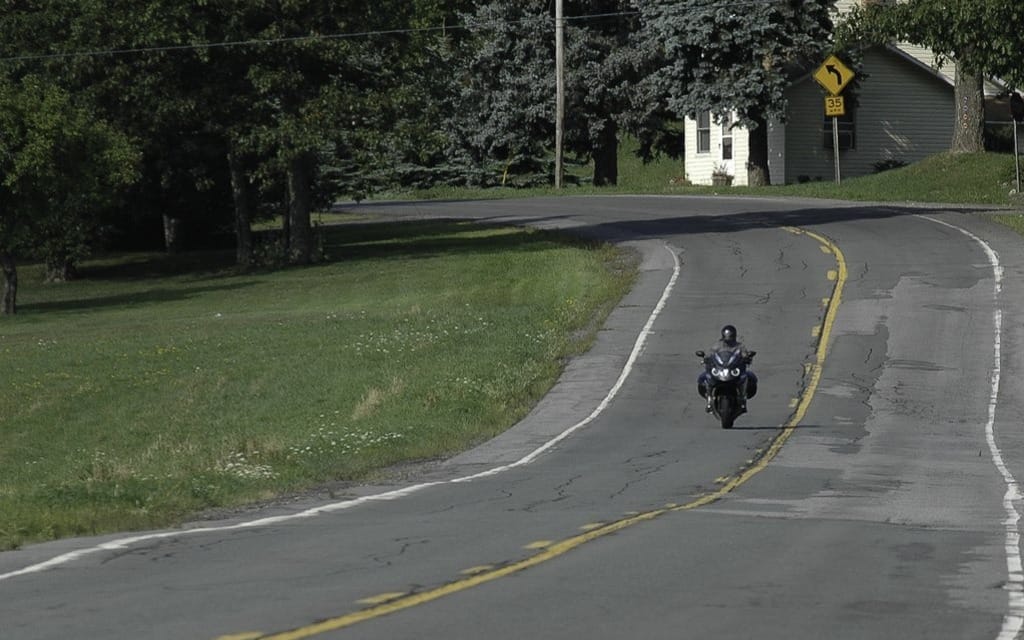 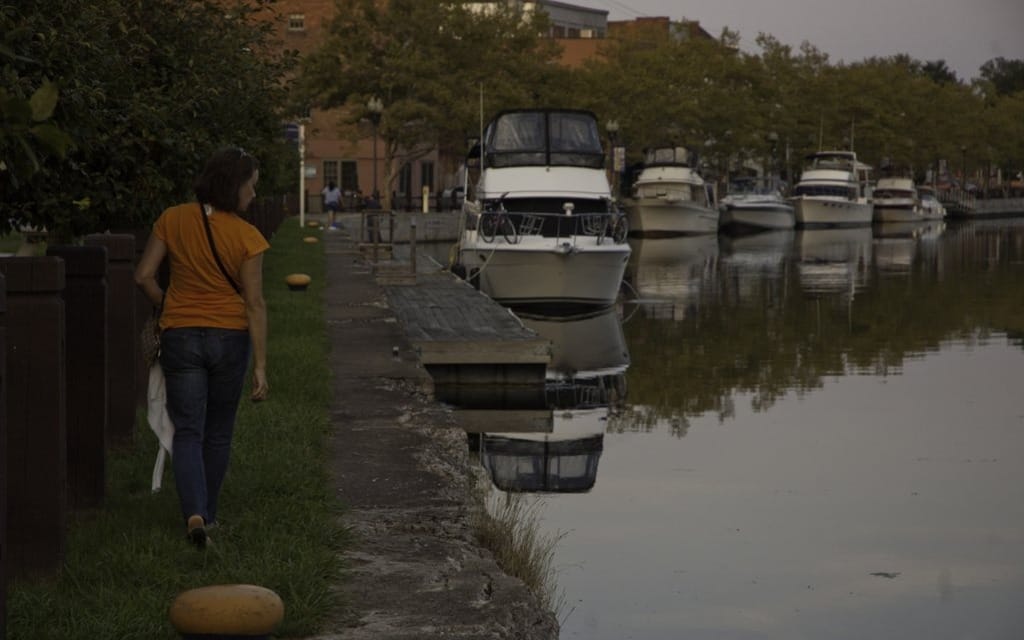 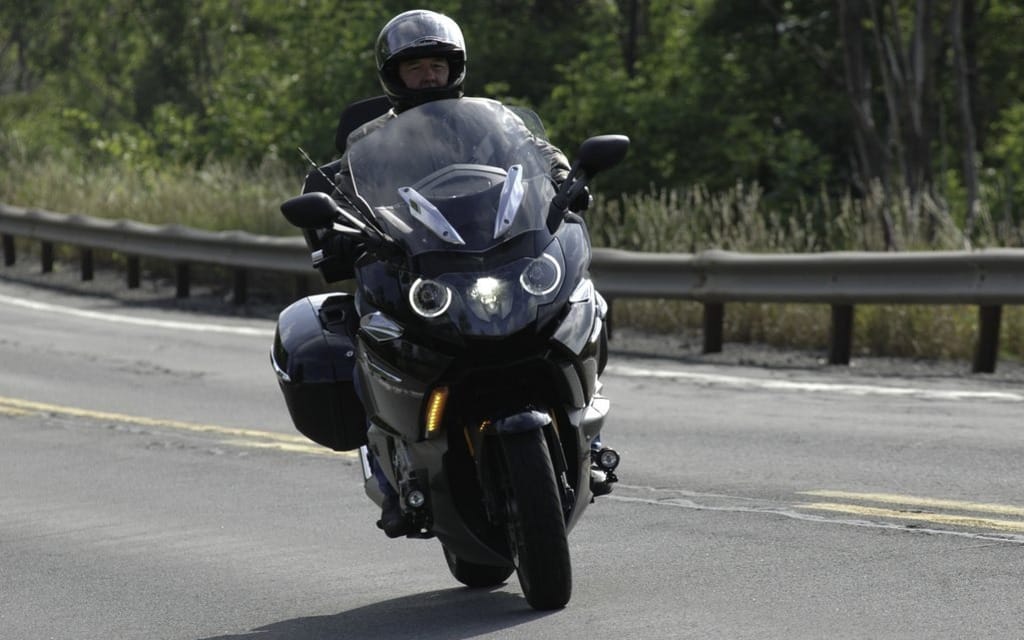 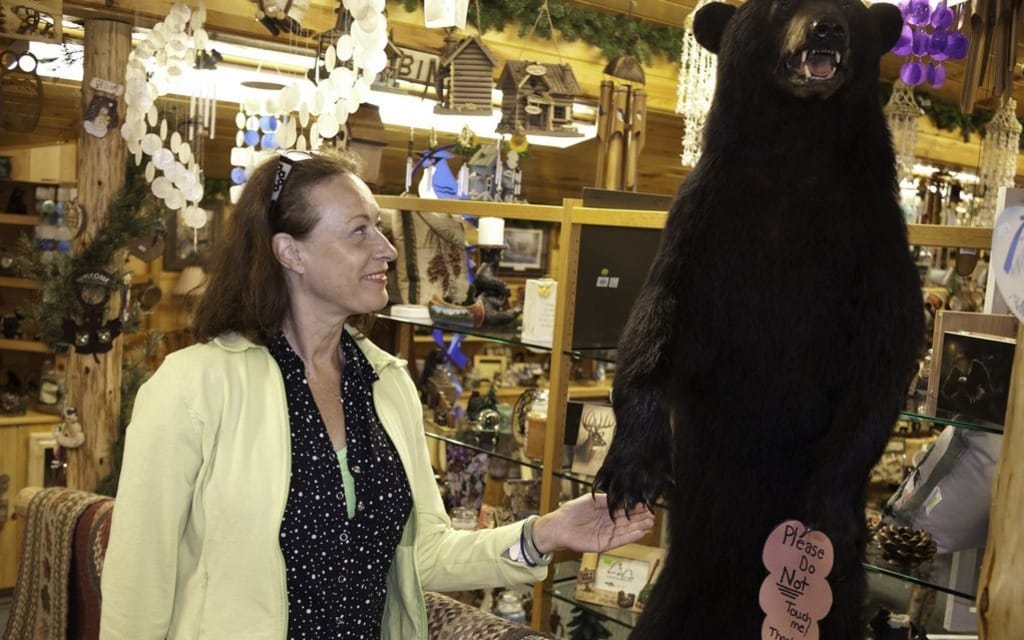 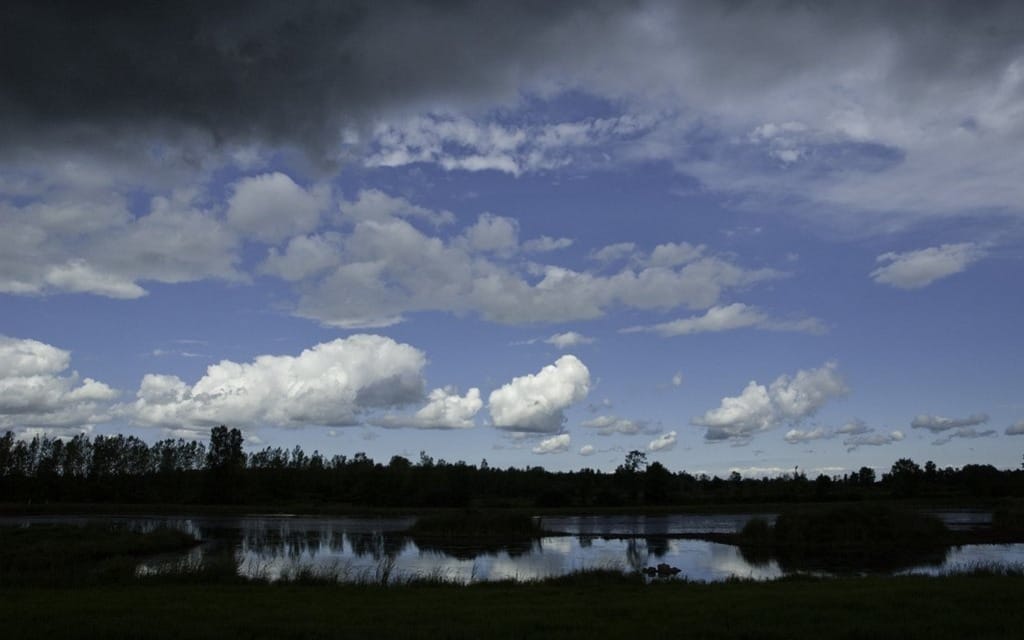 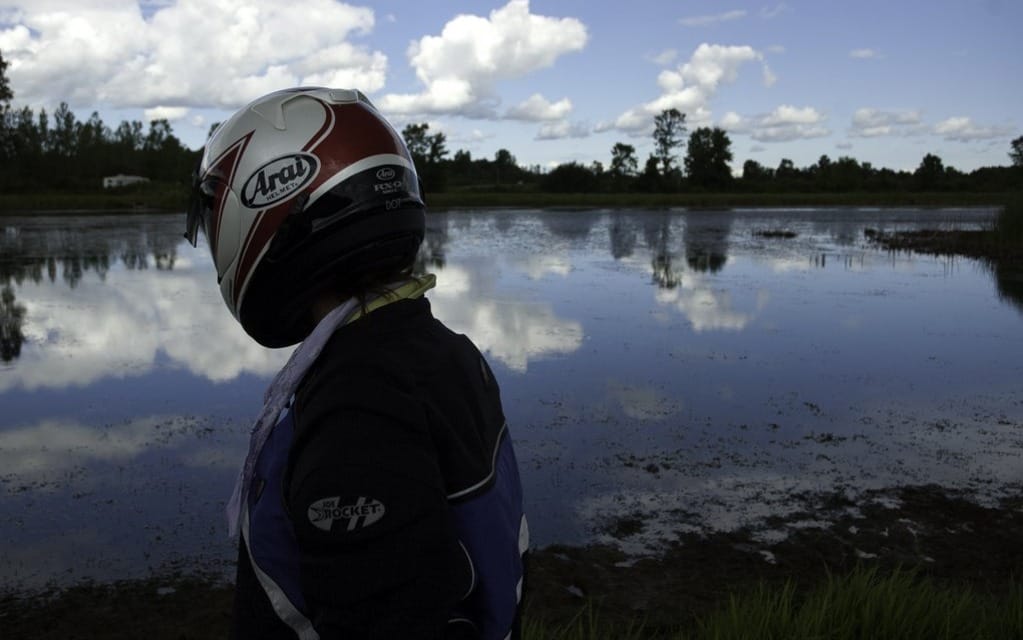 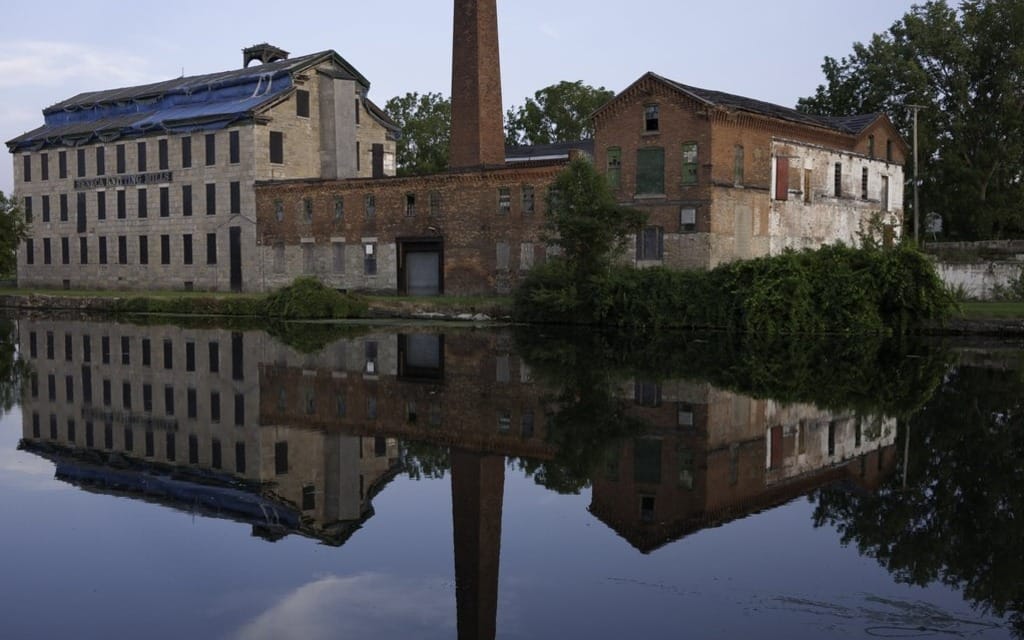 A Fistful of Rein

Mr. Thornton takes a new friend for her first motorcycle ride. And maybe her last.
“You should write about Thousand Islands dressing.” We’re sitting in Devorah’s kitchen, discussing an upcoming tour aboard BMW’s K1600GTL. I’m not sure that she understands the purpose of this trip. “Thousand Islands dressing,” I say. “Good idea.”

I had planned on taking a week, going down to Tennessee, seeing the Blue Ridge, Tail of the Dragon, but she’s worried. We haven’t been seeing each other very long, haven’t spent more than a weekend together. She doesn’t know if she can put up with me for a whole week. Plus, of course, she’s never been on a motorcycle before. “Okay,” I say. “We’ll just go down into New York state. We’ll be home in three days, four at most.” I try to make it sound like I’m sacrificing something for her, but the truth is, I feel the same way. How much of Devorah can I swallow in one gulp?

Now she feels better — excited, even. Offers a suggestion. We have planned to cross the border near Kingston, a stone’s-throw from the Thousand Islands. So I should write something about the salad dressing; it’s a natural. Devorah, you get the best ideas, I tell her. Later, she questions me about gear: how much room is there, what clothes should she bring. She will get one side case, which she will fill with clothing that will keep her physically comfortable. She’ll let fashion take a back seat to necessity.

Aug. 14, Kingston, Ont., to Cranberry Lake, N.Y. Devorah won’t ride on big highways, doesn’t even like to drive them, so she takes the train to Kingston while I ride the BMW there, and on a cool and rainy morning, she plants her ass on the seat of a motorcycle for the first time. I have been warned that if I get sporty on this thing, she’ll fly home. But I keep it mellow, and as we cross the St. Lawrence River, there’s a view of the islands. Devorah leans into me. “Thousand Islands dressing,” she yells. “Don’t forget!”

South, into the Adirondacks. The two-lane highway picks up some character, takes off its shirt and tie, climbs into pillowy green mountains. Devorah leans forward, taps my shoulder. “Did you smell that?” The pine forests are dense, aromatic. The road sashays over a hill, twisting pleasantly as if falls over the other side. Ahead, there’s a deer on the road. I brake gently as it wanders into the bush, and I wait, one second, two, and another one comes out, crosses the highway. I accelerate away, but gently, gently, and even at these speeds the road is a playful thing, the ride is sensuous and flowing.

There’s a lodge at Cranberry Lake, and they have a bar, a restaurant, and best of all, a lake. We dine on the patio, watch seagulls and a young, persistent water skier. He falls, gets back up, swings wide arcs around the lake. We finish our meal, have a glass of wine as evening falls, listen to a curious mixture of heavy metal and country music from the bar. The skier is still out there, falling, getting back up, feeling the thrill of the ride, even as night falls. The following morning we take a walk, exploring. We find a general store that has baked goods, fishing rods, stuffed bears. A sign implores customers to avoid touching the bear. Devorah has me take a picture of her, touching the bear. Farther down the street, we come upon a truck plastered with protests: It’s no damned PARK. It’s the ADIRONDACKS. It’s our HOME. It’s where we WORK. An election is coming, and this guy is not voting for Obama. “NoBama ’12.” “Obama would make a great speed bump.” And one that truly frightens me: “I don’t believe the Liberal media!”

Aug. 15, Lumberjack Inn Restaurant, Tupper Lake, N.Y. There are rusty chainsaws and axes on the walls, pictures of loggers. In the washroom, a poster: Instructions for Choking. But it doesn’t tell you how to choke someone, only what to do if it happens. I will this poster in other restaurants; perhaps it is a common occurrence in these restaurants. At a table near us are a man and a woman, old, wearing checked shirts, bluejeans, white runners. The waitress speaks to them: How’s it going? “Can’t complain,” Mr. Checked Shirt says. “Nobody’d listen anyway.” This is followed by a round of laughter. The Checked Shirts are brother and sister.

Aug. 15, Adirondack Mountains, N.Y. I did not know that the roads down here were this good. Route 30 dives and sweeps through forests and small towns in a way that demands sporting behaviour. I adjust the speed, try to stay smooth. Earlier, I asked Devorah to shoot some pictures of me riding it, and while she stood on the side of the road I explored the powerband. The BMW rips through first and second in long, sultry rushes of power. Afterward, with Devorah back in the saddle, I am unmindful, let the bike surge, and feel her fists grabbing my jacket, twisting. I pull over, annoyed. I lift her visor, and there’s no kindness in my voice as I question her. “Devorah, what’s wrong?” She takes a moment to breathe. “I’m sorry, Steve. I can’t help it. I just feel scared.” There was a car accident, years ago; she has scars, physical and emotional. The physical scar doesn’t bother me; she’s beautiful. “I feel like I’m spoiling your trip,” she says. “But I can’t help it.” I lower her visor, get back on the seat, and riding away, I keep the speed down. An hour later, swooping through the Adirondacks’ lush curves, I let it come back up, but there is no grabbing of the leather, no fearful twisting. Somehow, she has found it within herself to relax. Or to pretend.

Aug. 16, Margaretville, N.Y. The Adirondacks and the Catskills are two mountain ranges arranged north-and-south. We have come out the bottom of the Adirondacks, stopped in Margaretville, near the top of the Catskills, which I have decided to forego. At Margaretville we have fried egg sandwiches for breakfast, then a few minutes exploring a main street flush with American flags, flower boxes, quaint shops. After breakfast, we head up 206, through Walton, Masonville, Coventry. This is not a park road, but it’s a good road, lively and smooth. The road construction crews in New York state must be trying to restart the economy; smooth pavement is everywhere. We come up to some traffic, a slow truck, and there are plenty of passing opportunities, so I prepare. I lean my upper body to the left, looking past the truck, checking clearance for the pass, and I feel Devorah’s hand on my left shoulder, pushing me back into line. Hard. No passing. No passing! I am amused, rather than annoyed. She’s making her point and, what the hell, I like having her there behind me, with me.

We head north, up to some long, finger-like lakes not far from Rochester. At Seneca Falls we find one hotel, the Clarence. It looks dull on the outside, but inside it’s a little bit art deco, a little bit country. It’s a Wonderful Life is projected onto the wall near the check-in desk 24 hours a day. Clarence gets his wings. We stroll down by the river, where old mills appear to have been abandoned. It’s a postcard. Later, we have dinner in the hotel bar, get a bottle of local chardonnay that’s surprisingly good. We sip the wine and talk while the view outside grows dark.

Aug. 17, Canada. The Burlington Skyway is windy and full of traffic moving very quickly. We get down off it, find a turn-off, and I pull into a Tim Hortons, where they’re advertising ice cream cones. I get off the bike. “Hey, you want some ice cream?” I say. She sort of looks at me and shakes her head. I help her get the helmet off. She sits there, unable to move. A thousand-yard stare. After a couple  of minutes, she says, “I was so scared I couldn’t move.” She still can’t move; she is utterly drained. She wants only to sit there while I go in for ice cream. I had no idea, there was no sign of her fear; she was paralyzed. The rest of the ride into Toronto is four- or six-lane expressway, busy and crowded and fast. I stay in the right lane, take it easy, and an hour later, we’re trolling city streets. By the time we get to her place, she’s back. “We made it,” she says. “We didn’t kill each other.” She seems happy. I say I think we should do another tour next year. She looks at me for a moment before she answers.