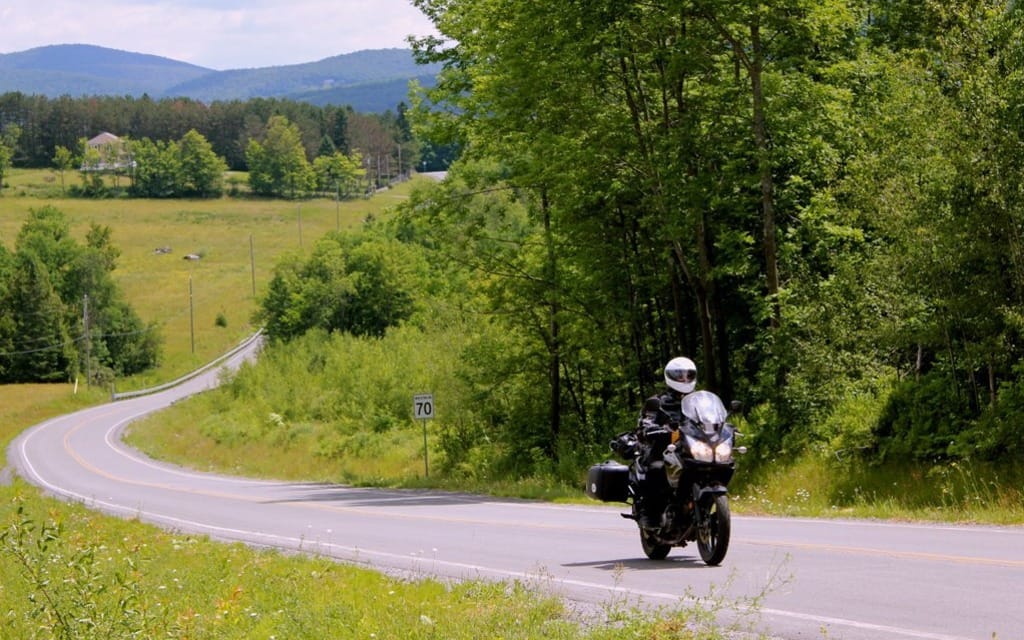 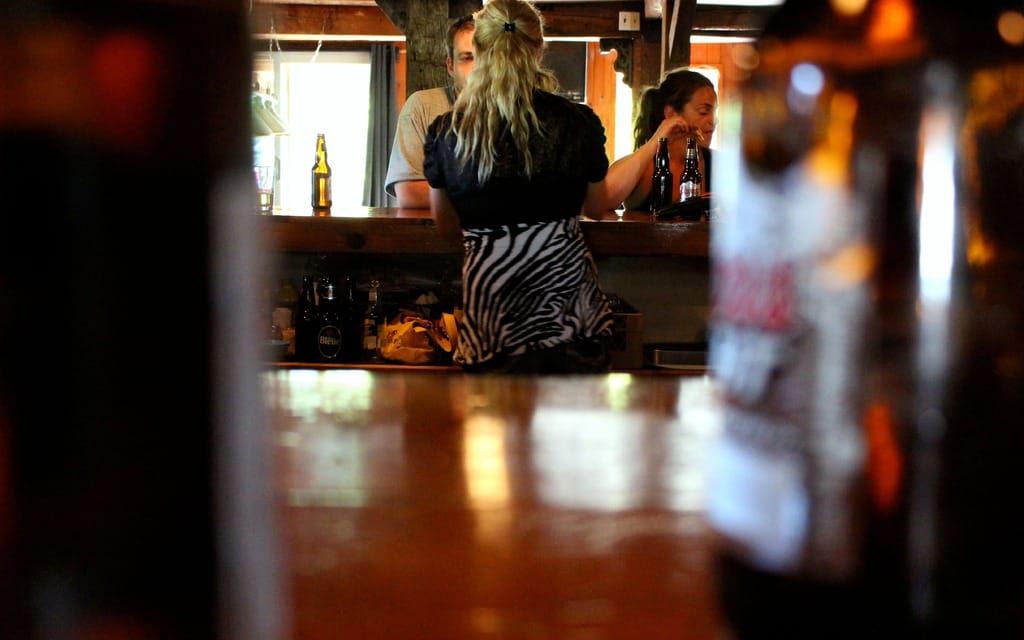 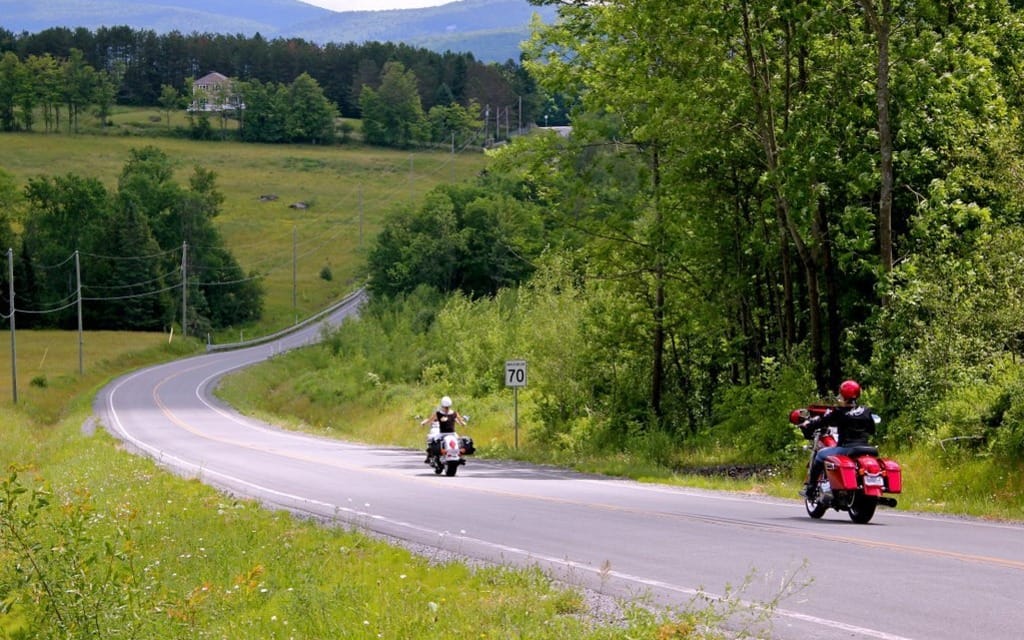 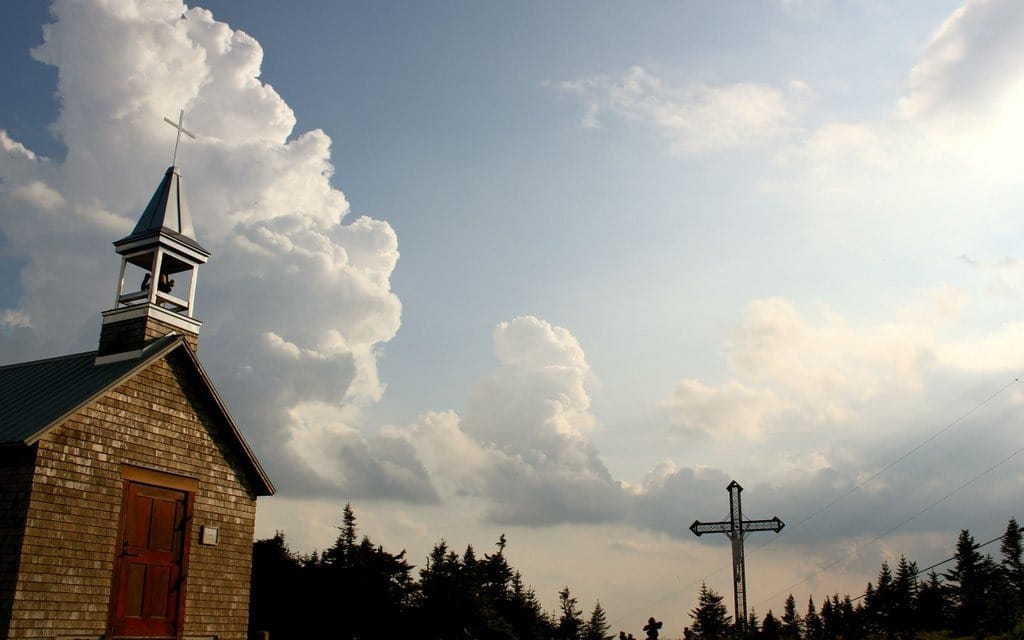 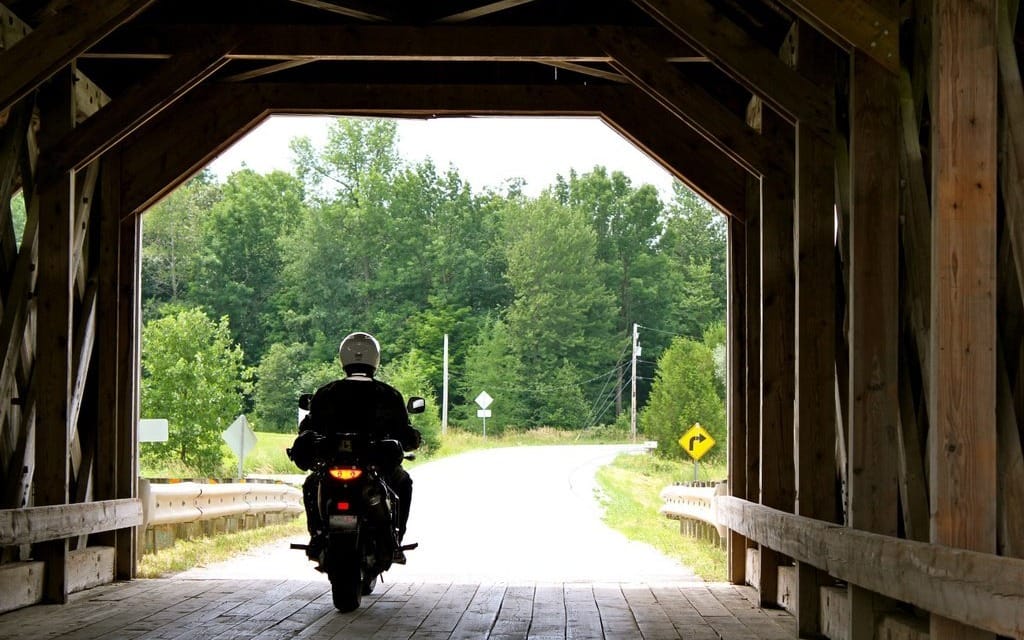 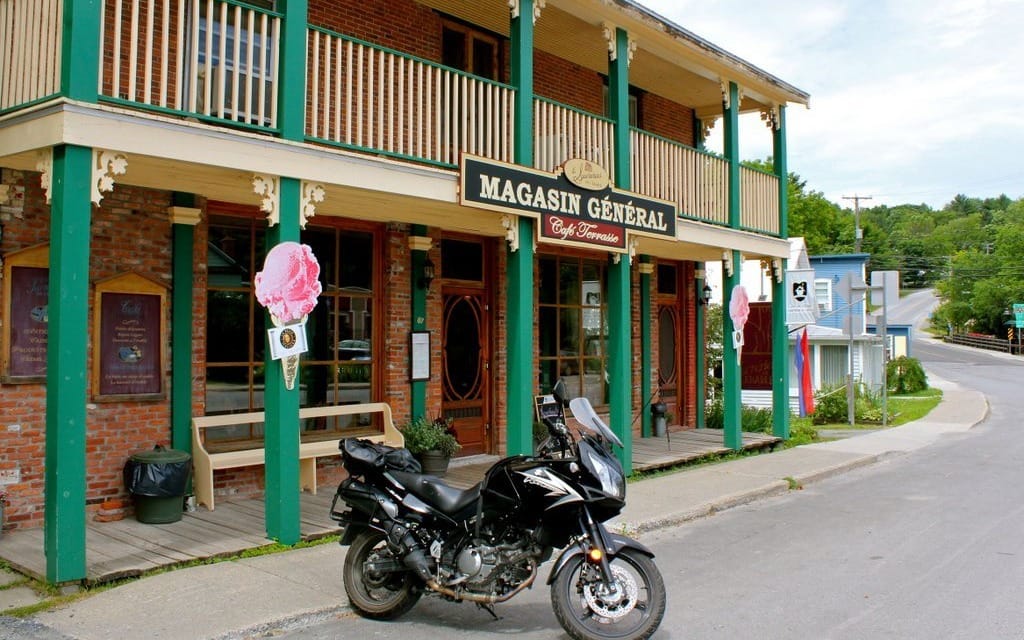 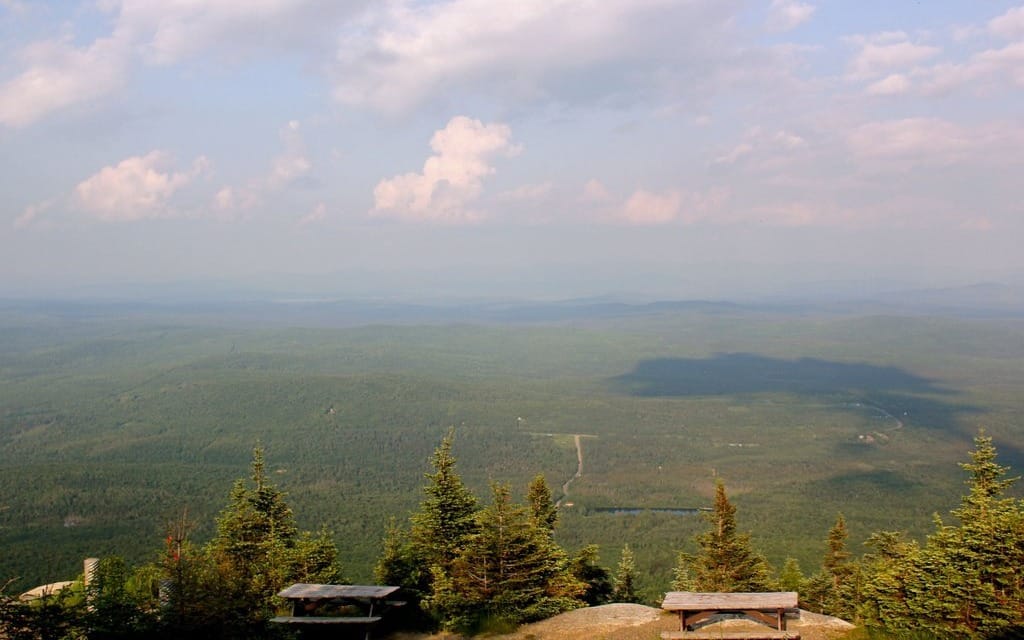 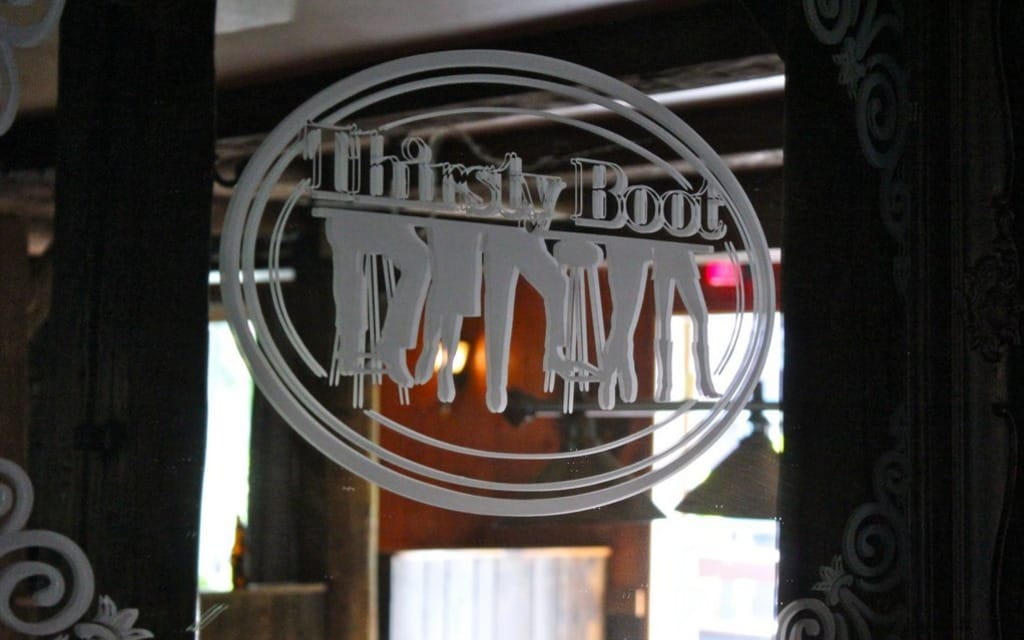 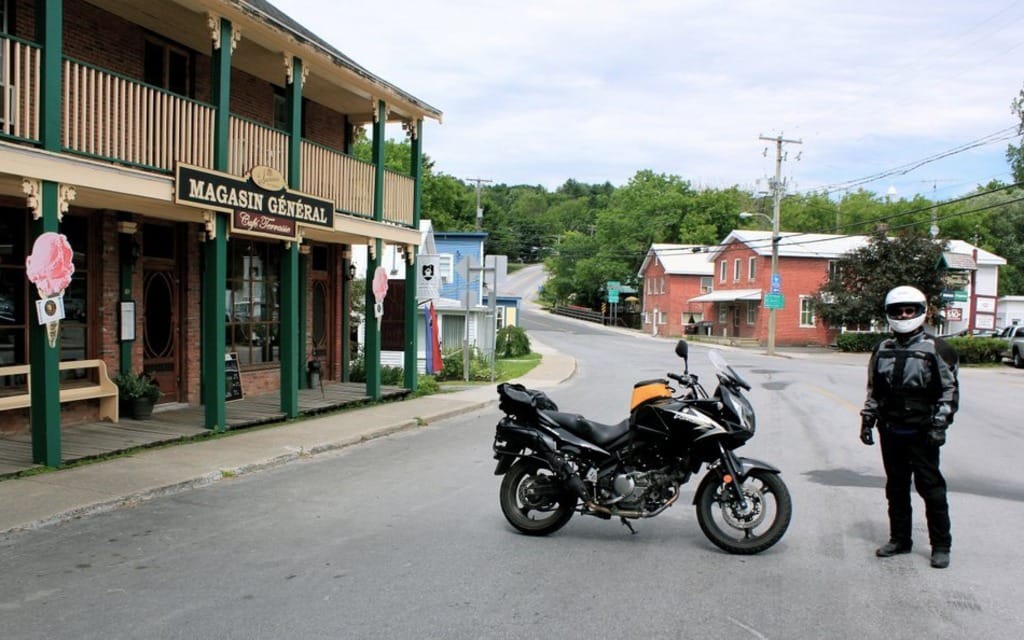 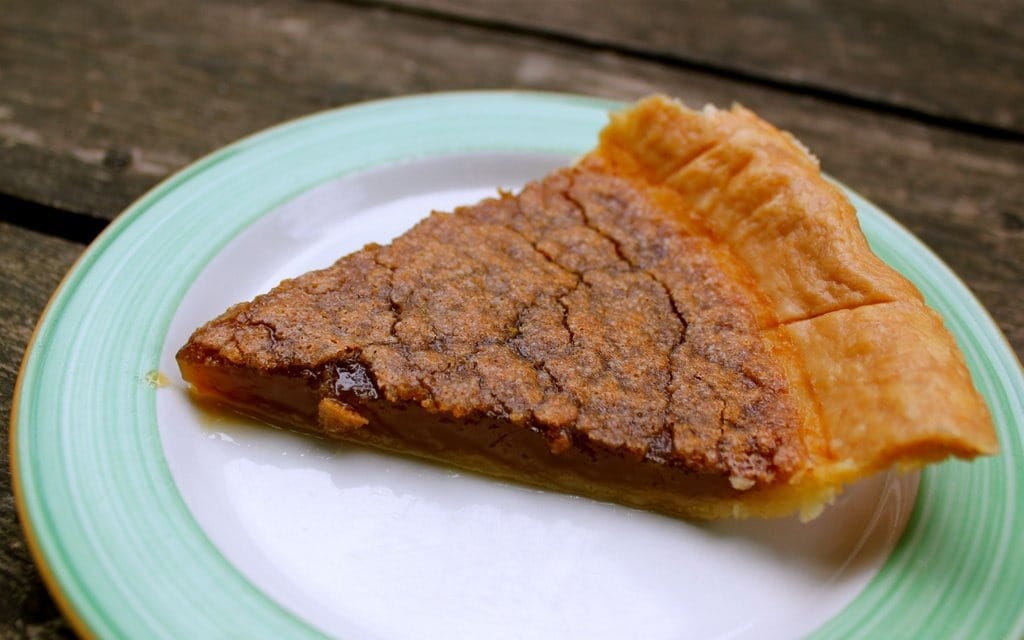 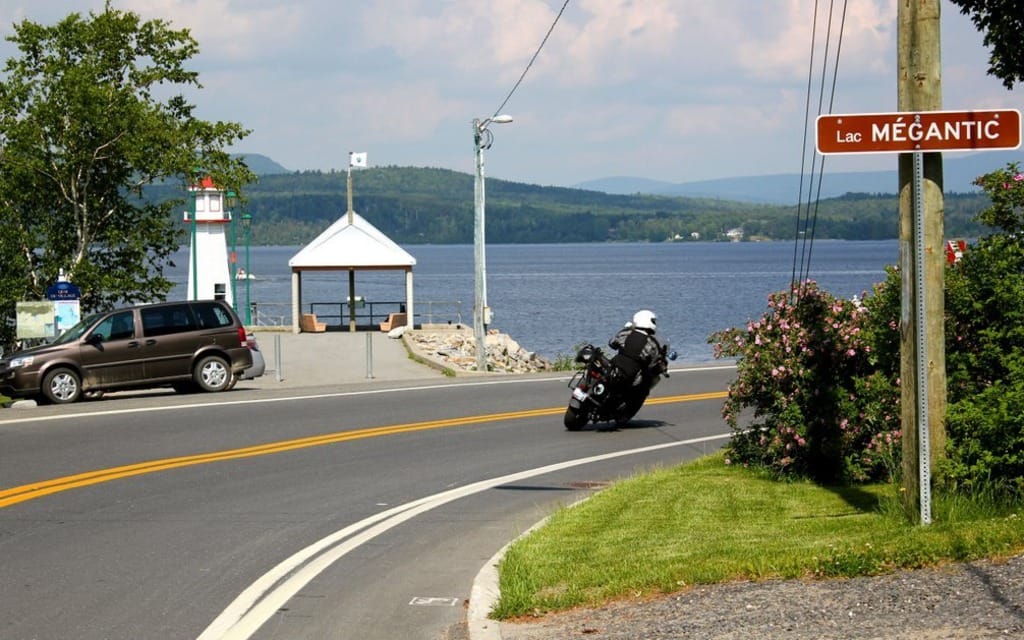 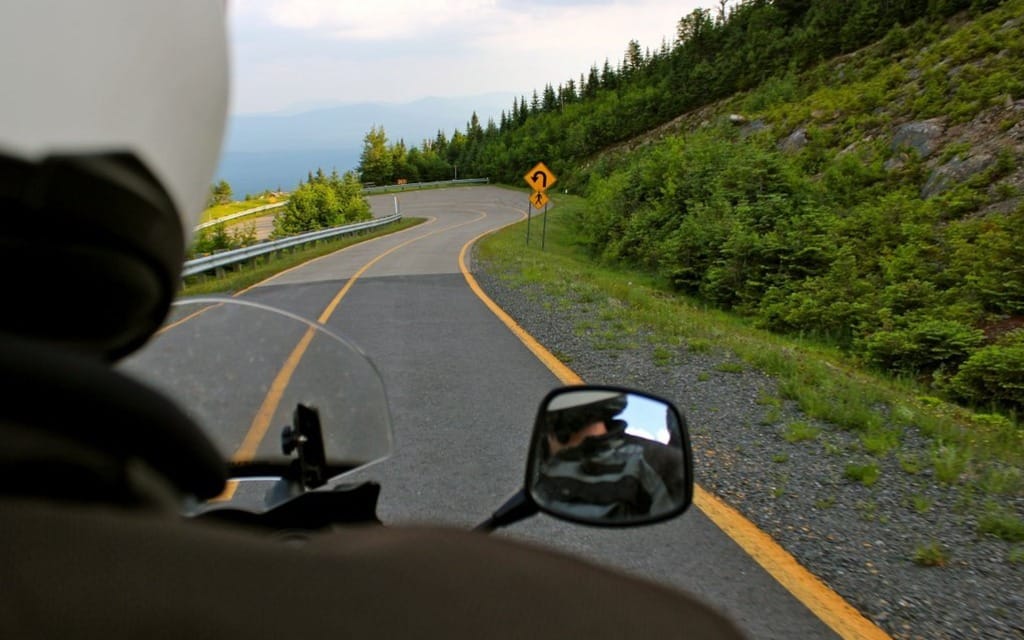 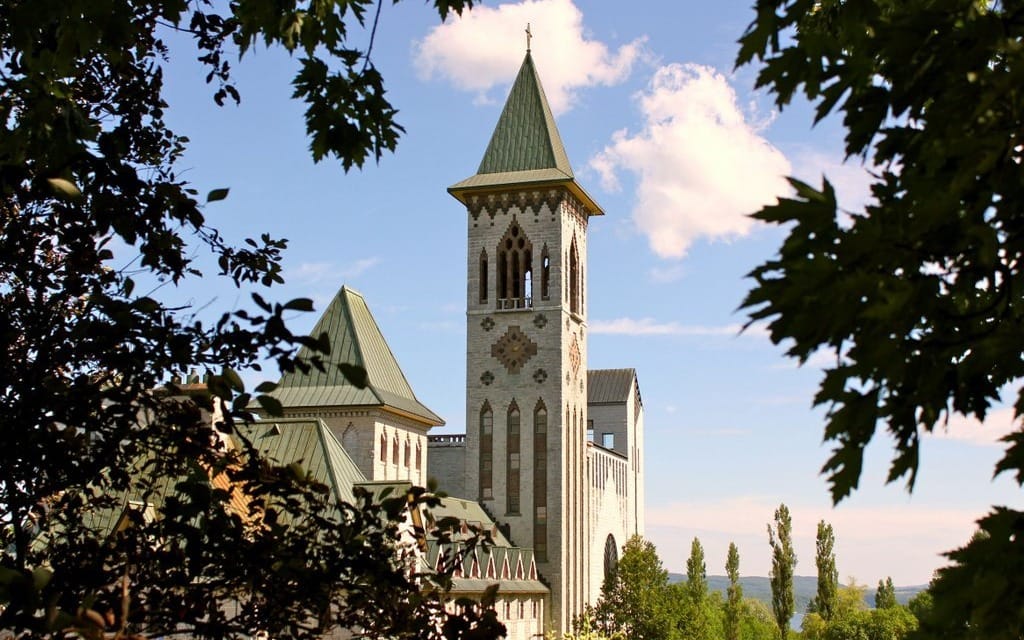 The message posted at the door of the B&B has me completely baffled. So much for five years of high school French. With my wife waiting impatiently in the driveway, I hazard a guess: “I think they’ve gone downtown for some sort of festival.”

Lana’s eyes narrow through the visor of her Arai. It’s 7:30 pm, and we’ve just arrived in Sutton, a small town in the Eastern Townships of Quebec. We have to find a place to stay, clean up, and get to a restaurant before they roll up the sidewalks for the night.

I twist the antique iron doorbell one last time, then dig out my phone and start making some calls. Just as we confirm a bed at the other end of town, a smiling woman in a purple sundress emerges from the house. She apologizes profusely. “I’m sorry, we’re undergoing renovations. Didn’t you see the sign?”

Lana and I had been to Montreal and Quebec City, but beyond that we’d never explored Quebec. So, with a few days set aside for a motorcycle trip, the Eastern Townships, or Cantons de l’Est, looked intriguing. A pocket of mountainous territory between the St. Lawrence and the borders of the New England states, the Townships promised a rare combination of twisty roads and continental-style comforts. Pennsylvania also offered great riding, and was a little closer, but riders, like armies, travel on their stomachs. Given a choice between steak frites and a bold cabernet or Pennsylvania “scrapple” and a lukewarm Coors, there was only one logical option.  Allons-y!

After a night’s rest in a fluffy bed at La Gite Aux Douceurs Matinales (Google translation: “Cottage to the sweet mornings”) we set out to explore the Townships’ eastern frontier.  Our route first takes us north, along the Chemin de Mont-Echo, through Sutton Junction to Lac Brome.  We entered the Townships through Vermont, and for the first few miles the terrain here echoes that Green Mountain state’s undulating hills and neatly painted farmhouses.  This is United Empire Loyalist country, a stronghold of Quebec’s Anglophone population since the late 1790s. It’s also prime cycling territory, and on some stretches of road pelotons of two-wheelers outnumber cars. The cyclists are fit, tanned, and to my surprise, mostly grey-haired. As we power past them on two cylinders instead of two legs, I feel a bit guilty—but only a bit.

Closer to Lac Brome, the landscape flattens while the trees and houses grow taller. The road that rings the lake is lined with golf courses and the expansive vacation homes of wealthy Montrealers. Former PM Paul Martin lives hereabouts, as does the Desmarais clan. Not for nothing is the Knowlton area called “The Kn’amptons.” The smell of old money is too much to bear: We head directly for Highway 10 and fly east, past the towns of Eastman and Magog, exiting the highway to ride towards La Patrie, the gateway to the Townships’ “Summit Route.”

We follow the road into the heart of the mountains, through Notre-Dame-du-Bois, Quebec’s highest village, and Saint-Augustin-de-Woburn, at the foot of Mont Gosford. A series of meandering curves soon leads us into the oddly-named Piopolis on the shore of Lac Mégantic. We stop for a break at the town wharf. For a while, our only company is a lone fisherman in a straw hat, casting for his lunch. Then a man approaches with a smile and a friendly question about our trip. Like most people we’ve met so far, he is grey-haired, fit and tanned. He points us down an entertaining side road before leaving me with a piece of sage advice and a pat on the arm. “I used to live in the city, too,” he says. “But I like it here much better. It’s a choice, you know.”

With visions of early retirement dancing in my head, we follow his directions and head west. On our left, the terrain falls away beneath us, then rears up again in the distance to form an impressive cluster of peaks: Saint-Joseph, Victoria, Franceville and our destination, Mont-Mégantic.

At 1,100 metres, Mont Mégantic  is the highest point in Quebec accessible by road. It’s also a dark sky preserve with a working observatory. I’m eager to catch the view from the top. But when we arrive at the base of the mountain, the ticket office is deserted and a gate blocks the road to the summit.

Grey clouds are gathering over the mountain and it’s starting to rain.  Screw it—it’s now or never. I thread the V-Strom between the gates, and we zip up the series of tight switchbacks that lead to the top of the mountain. Half-way up, the clouds break and sunshine sparkles off the damp road.  The view from the top is worth risking a park ranger’s ticket.

Descending Mont Mégantic, we find a side road that leads to the top of Mont Saint-Joseph. Here the vistas are even better, offering sweeping, unobstructed views of Parc Nationale du Mont-Mégantic. Tucked into one side of the summit is Sanctuaire Mont-Saint Joseph. The tiny chapel was built in 1883 by the citizens of nearby Val-Racine, in the hopes the saint might protect their village from the powerful thunderstorms that rolled through the mountains.

I say a prayer of my own just a few minutes later, when a small doe darts in front of the bike.  Panicking, the little deer turns and runs straight down the road. We follow her down the mountain, through the switchbacks, until she finally regains her senses and dives back into the trees.

At breakfast the next day, our host Gilles (grey-haired, fit, tanned) recommends we explore some of the smaller villages in the area around Sutton. It’s a good call. Although the mountains are lower here, the roads are quiet and winding, and the villages are charming, without Knowlton’s old-money pretentiousness.

The first leg of our route takes us south through Abercorn and Abbot Corner to Frelighsburg, a pristine hamlet on the banks of the Brochet river. We grab lunch at Les Sucreries de l’Erable, a café housed in Frelighsburg’s well-preserved general store. It’s a difficult place to leave, and we linger in the garden over coffee and maple syrup pie. The pie is smooth and delicate, a sophisticated French version of the butter tart.

Fully charged with sugar and caffeine, we bounce along a ribbon of frost-heaved asphalt as it unfurls past vineyards and apple orchards, stopping to snap a few photos of the Guthrie covered bridge, the smallest in Quebec. Then, circling back, we dive into the Missisquoi River valley, taking the river road east through Dunkin, Highwater and Mansonville, and up the shore of Lake Memphremagog.

The last few miles are an entertaining roller coaster through fields and shady forests, so I need to brake hard when a 20 km/h speed limit sign flashes by on my right. Suddenly the trees part and we enter the grounds of the Abbaye Saint Bênoit-du-Lac Benedictine monastery.

The surrounding gardens are a peaceful spot for a rest, but the interior of the abbey is a jarring surprise. The design is geometric and modernist—a kind of ecclesiastical art deco called “Bellotism.” I’m usually a fan of art deco, but compared to my favourite Gothic churches this place feels sterile and cold. I go to the gift shop for a look at the abbey’s homemade cheese, but when a passing monk looks disapprovingly at my riding pants and boots, I decide it’s time to visit a different kind of shrine.

Not far from the abbey, on Rt. 243 south of Knowlton, is the legendary Thirsty Boot pub.  This was one of author Mordecai Richler’s favourite watering holes, and its regulars were an inspiration for some of his books’ colourful characters. By all accounts Richler never put on airs. Here at the Boot, he was just one of the gang.

When we arrive it’s almost 5 p.m. on a Friday, and the party is well underway. We skip the crowded front porch and enter the murky gloom of the bar. The Thirsty Boot is a genuine dive, smelling of sour beer and billiard chalk, and decorated in varying shades and grains of wood paneling. On the jukebox, Dwight Yoakam’s “Guitars and Cadillacs” is blasting over the shouts of local barflies. Before I can adjust my eyes, somebody shouts, “Hey, the Hells Angels are here!” to a chorus of drunken laughs.

We take a seat at the bar, and kick back with a cold drink. On the opposite side a girl closes her eyes and sings along with Dwight. Beside her, two red-faced blowhards hee and haw at something one of them just said. I cast my eye around the room, then break out laughing myself. There are two decorative brass plates on the wall—my parents had the same ones on our living room wall when I was a kid. I’m not sure my prim and proper mother would find it so amusing.

As we finish our drinks the bartender takes delivery of a stack of pizzas. “We sell them by the slice, so our customers get something in their stomachs,” she says. Her comment reminds me that all these happy boozers will soon be driving home from this roadside bar. Time to go.

As we say goodbye, one of the Thirsty Boot-ers takes Lana by the hand to insist, “You’ve got to ride Chemin de Fuller … it’s the most beautiful road around here.” When we turn onto the road I think she’s played us for fools. Fuller is layered with pea gravel, lined with bone-jarring ruts and surrounded by dense forest. Even if I could look up from the road I wouldn’t see a damn thing. As we ride my stomach starts to rumble, and I begin to worry about getting lost and missing my last meal in Sutton.

Suddenly, the road breaks through the trees and into a mountain valley. On our left, the peaks seem close enough to touch. The sky is clear and blue and the sun washes the valley in soft gold.

In a few hours we’ll make it back for a late dinner. A free-spirited girl named Soleil will serve us a dinner of Lac Brome duck and cold beer, and her friends will tell us about a secret swimming hole that only the locals know about.

But right now, at this moment, there is just the two of us, and the mountains, and our motorcycle.