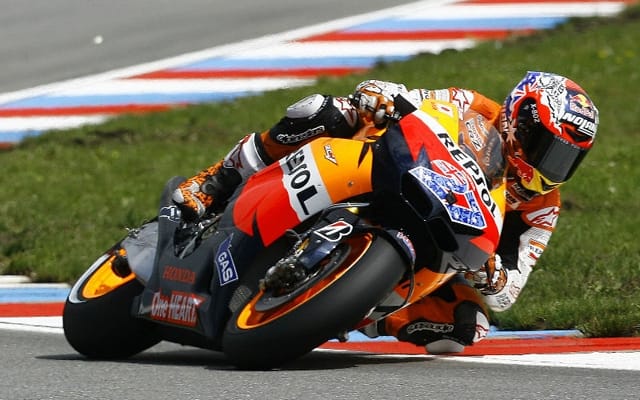 Casey Stoner contended with a greasy new track surface and an errant gopher to emerge as the fastest rider yesterday during practice at the 2011 Indianapolis MotoGP.

The current championship points leader was one of many riders to give the speedway’s new asphalt (covering turns 5 to 16) a failing grade — claiming it is worse than the bumpy patchwork of old tarmac that it has replaced.

“It’s incredibly slippery and the track is certainly my least favourite of the whole season,” said the Australian.

“It’s very tight, slippery and the new surface is pretty bad,” continued Stoner. “It’s not just the dirt on the surface but there seems to be something strange where the two surfaces join, some grease of some sort that creates more issues.”

Morning lap times were down accordingly across the board,  initially three to six seconds off record pace. But track conditions seemed to improve as the day wore on, with Stoner eventually coming within 0.58 seconds of the official lap record with a time of 1’40”.724, and homeboy Ben Spies just 0.194 seconds behind. Stoner’s Repsol Honda team-mate Dani Pedrosa was third fastest, another 0.287 seconds back.

Stoner’s day one performance on the inhospitable circuit was made all the more impressive by the fact that he also had a high-speed near-miss with a gopher walking across his path.

“My last few exits were slightly ruined from traffic on track and also wildlife!” he said afterward. “I saw something out the corner of my eye. I’m not sure what it was — perhaps a gopher or something. I thought it was a part from someone’s bike. I’m just glad we both escaped from that situation unharmed!”

Watch a video of the incident below.