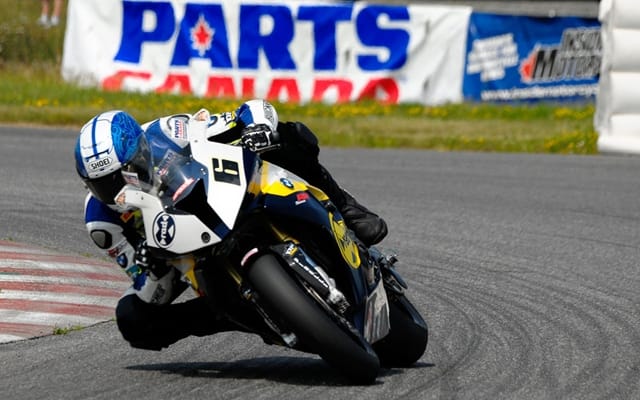 Brett McCormick won the second and third rounds of the Parts Canada Pro Superbike Championship in impressive fashion this weekend at Shannonville Motorsport Park in Ontario.

Riding the BMW Motorrad Canada / radX BMW S1000RR the 19-year-old won Saturday’s Superbike feature from pole position, leading every lap and pulling away to put a commanding 20.421 second gap between himself and seven-time champion Jordan Szoke by race end.

“They made me work for it off the start,” said McCormick, who was beaten into the first turn by Suzuki rider Alex Welsh. “But I got a good drive out of turn two and was able to get up the inside of Alex in turn three.”

McCormick’s  BMW team-mate Michael Ferreira was able to grab the final podium spot, after Welsh lost a contact lens and had to drop out of the race on lap eight.

“We made some changes last night to help make the suspension last but Jordan put in a good ride. He was going quite a bit quicker today, said McCormick of his arch rival’s round three performance”

McCormick’s record is perfect thus far in the 2011 Canadian Superbike Championship. As the seven-race season nears its halfway point, the Saskatoon native has qualified on pole for each round, led every lap and won each race to amass the 164 point maximum. Defending champion Szoke is meanwhile a distant second with 127 points and Andrew Nelson, after a fourth place finish on Sunday, third with 110 points.

Round four of the series takes place July 10th in Quebec at Autodrome St-Eustache.