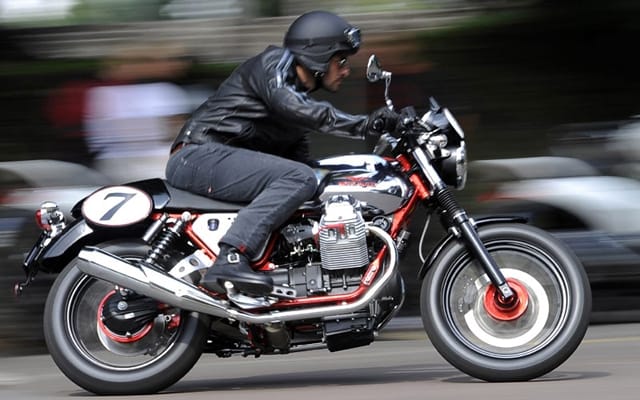 Last week in Italy, Moto Guzzi unveiled the V7 Racer, a café racer version of their V7 Classic. The new machine was on display last year at EICMA as the Clubman Racer, but is only now being released as a limited edition motorcycle under the new moniker.

Boasting cosmetic upgrades that include a chromed tank adorned with a leather strap, a suede upholstered saddle, and numerous hand-crafted, brushed aluminium bits, the V7 Racer is being marketed by Moto Guzzi as a luxury bike designed for a “gentleman in the mood for a track day”. The Italian firm is particularly excited about the bike’s steering yoke guard, a double chromed ring, so “exquisite” it “looks like an ornamental feature”. Judge for yourself by watching the video below. Though the music is beyond terrible, the visuals take you from initial sketches to final production, and then to the finished bike in action.

Performance-wise the V7 Racer is powered by a 744cc V-twin, suspended by fully adjustable Bitubo rear shocks and a Marzocchi front fork, and braked by 4-piston Brembos. An Arrow exhaust system can be added if you’re feeling extra sporty.

As to whether we’ll see the new model here in Canada, we’re not sure. Piaggio Group Americas hasn’t responded to that question yet. If the V7 Racer strikes your fancy, send them an email at canadacare@piaggiogroupamericas.com and let us know what you find out. Or maybe you can get their attention by starting a Facebook page.