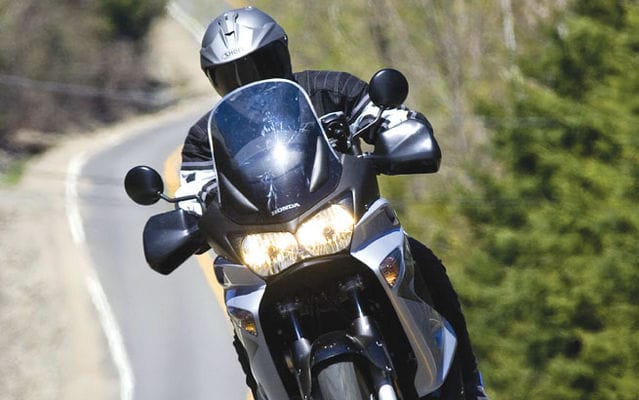 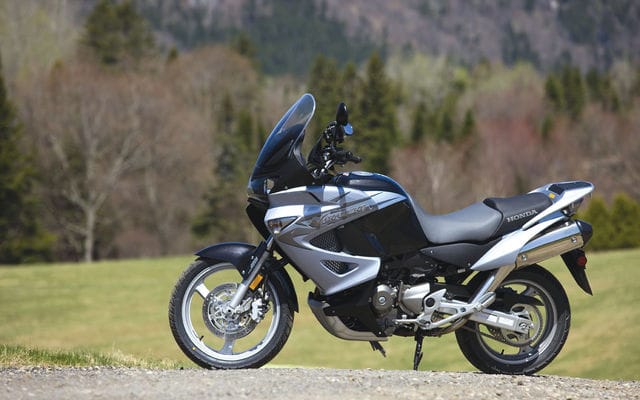 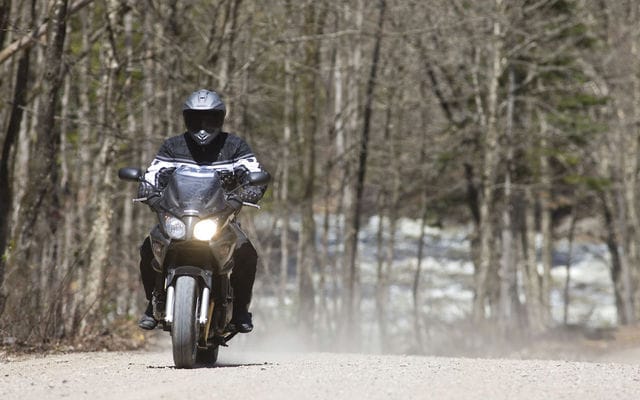 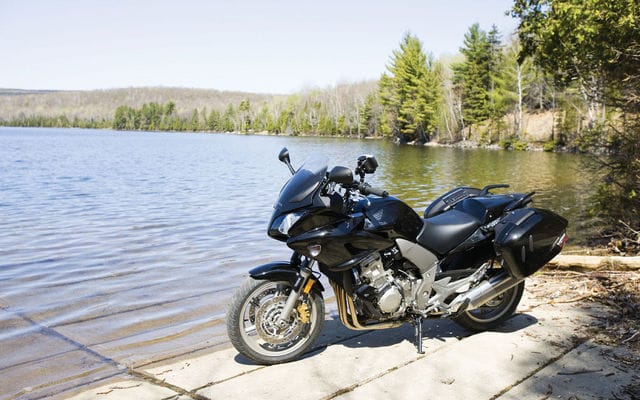 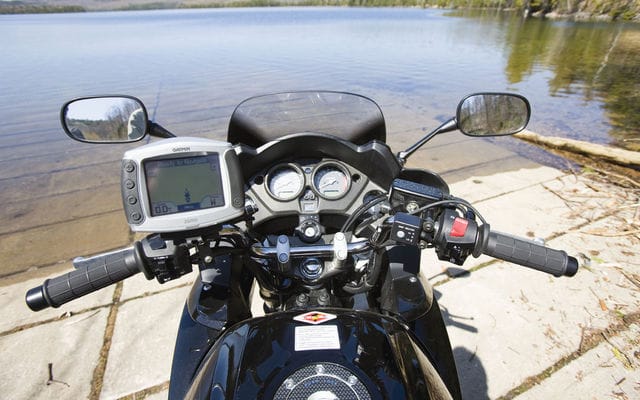 I’m thoroughly confused. We’ve just wrapped up a technical briefing describing the new Honda CBF1000 and the Varadero and we’re told that these are adventure bikes. The Varadero I can imagine fitting in the category, with its 19-inch front wheel, dual-sport tires and styling reminiscent of the Suzuki V-Strom or the Moto Guzzi Stelvio. The CBF1000 on the other hand, with its 17-inch wheels and CBR1000RR derived engine, seems better suited to winding tarmac. But then I ride both bikes on a winding gravel road and discover that the CBF1000 feels more at home flinging stones than the Varadero does. Confused indeed.

Honda is marketing these machines as adventure bikes (note that they are not referred to as adventure-touring bikes), and as Honda Canada’s Warren Milner pointed out, they are not dirt bikes. Adventure riding, according to Honda, doesn’t necessarily mean exploring cow paths, or even gravel roads; an adventure is anything a rider feels is adventurous; that may be a newfound destination or an unplanned ride. However, these bikes are said to be designed so that a stretch of dirt road, even if extended, won’t have to prompt a reroute in your itinerary.

These two new models are not available in the US, and are riding on the coattails of two other popular Canada-only Honda models, the Canadian Trail Edition ATV and the CBR125R. The unprecedented success of those two models forged the relationship between Honda Canada and Honda Motor Co. in Japan, and both are banking upon the success of the Varadero and the CBF1000 without the support of American Honda.

The Varadero is new to Canada, though it has been available for several years in Europe. It is powered by a VTR derived, liquid-cooled 90-degree V-twin displacing 996 cc that produces 92 horsepower and 72 lb-ft of torque. Power is broad and flat, and the engine keeps pulling long after the point you’d anticipate the power to sign off. It is a tall bike (838 mm/33 in. seat height), and with its 25-litre fuel tank full, weighs in at a hefty 277 kg (610 lb). It’s no wonder it was a handful on unpaved roads.

The sportier CBF1000 looks to the supersport CBR1000RR for motivation. Its liquid-cooled 998 cc inline four is retuned for bottom-end power, and despite its 97 hp/67 lb-ft claimed output, it packs a surprising punch from as low as 2,000 rpm and pulls quite hard to redline. It tips the scales at 250 kg (551 lb) with a 19-litre fuel load, though it carries its weight much lower and has a lower seat height, which is three-position adjustable from 780-810 mm/30.7-31.9 in.

Both these machines feature steel frames and limited suspension adjustability (rear preload is adjustable on both bikes; the Varadero adds rear rebound adjustment) but come standard with linked brakes and ABS. A slew of accessories are available, including saddlebags (33 litres for the CBF, and either 29 or 35 litres for the Varadero), a 45-litre top case for the CBF, heated grips, accessory outlets, dedicated riding gear and even an Arai XD3 dual-sport helmet. Honda Canada is currently working with Garmin to offer a specially developed Zumo 550 GPS unit.

In an unprecedented move, these bikes will only be available through Honda’s new Powerhouse dealers. Powerhouse is a new concept and is claimed to be the biggest project in Honda Canada’s history. Powerhouse dealers are claimed to offer a higher level of service, as well as the full line of Honda products, except automobiles (well, you won’t see the Hondajet there either). Several Powerhouse dealers are paired with Honda car retailers but are kept entirely separate and even have different business hours. These dealers must meet stringent standards set by Honda, including brand exclusivity and a common design theme, and are rewarded for their investment with certain perks—like the Varadero and the CBF1000—as well as some special edition models. How multi-line dealers that carry Honda products and your local mom-and-pop operation will react to this new strategy remains to be seen. Presently, of the 260 Honda dealers nationwide, only 24 are certified Powerhouse dealers, with more on the way.

Honda Canada held an early-May Canadian press launch for the CBF1000 and the Varadero in Quebec. Our ride begins in Mont Ste-Anne, just outside Quebec City, and ends in the well hidden but opulently garnished Sacacomie retreat, about 45-minutes north of Trois-Rivières. This is the ideal setting for these bikes, as roads are pleasantly twisty and horribly bumpy.

The Varadero deals with the big bumps quite easily, and smoothly transitions through turns regardless of the condition of the pavement. The CBF1000, with its reduced suspension travel, makes you wish you were somewhere else. On smoother, yet far from pristine roads, both machines handle with confidence, but the CBF really shines because of its lighter weight and torquey engine. Top gear is easily maintained at speeds as low as 60 km/h, with gobs of smooth acceleration available.

I’m at a loss to categorize these machines. The $13,999 Varadero makes a great long-distance mount, especially two-up, with its roomy and accommodating seat and protective fairing, and the $11,999 CBF1000 had me giggling on winding dirt roads. I guess the solution would be to hang onto both bikes as long-term testers. This way, we’ll have the season to figure it out.