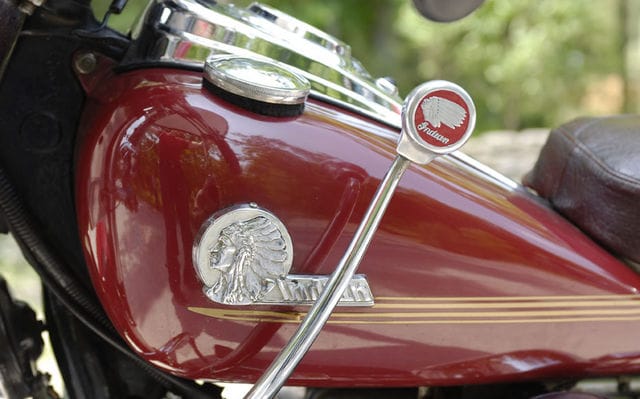 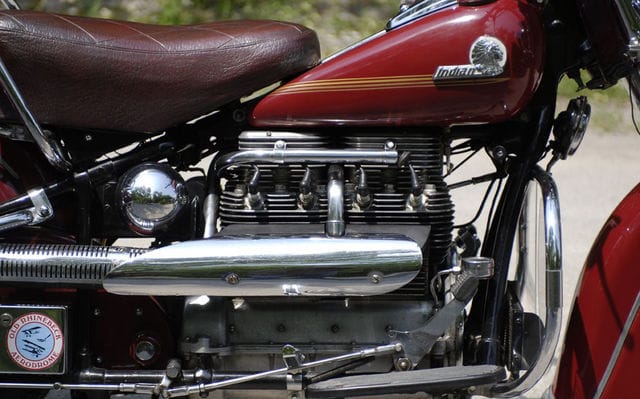 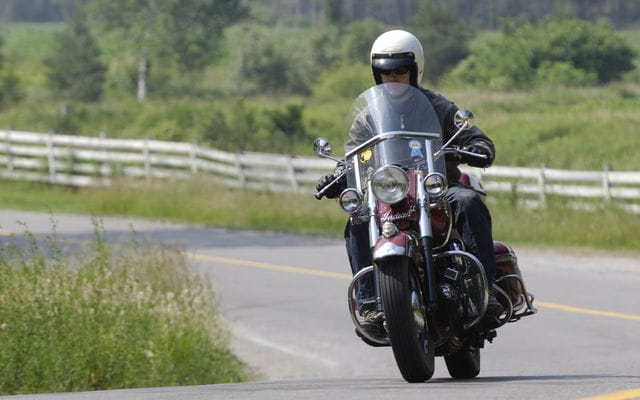 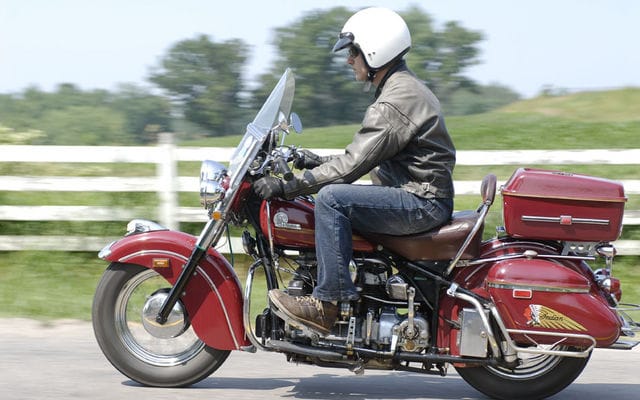 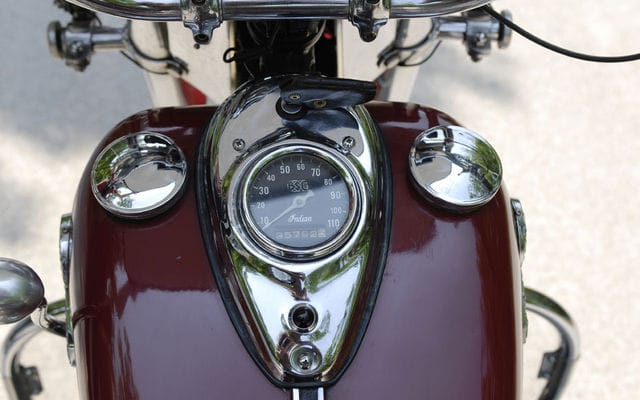 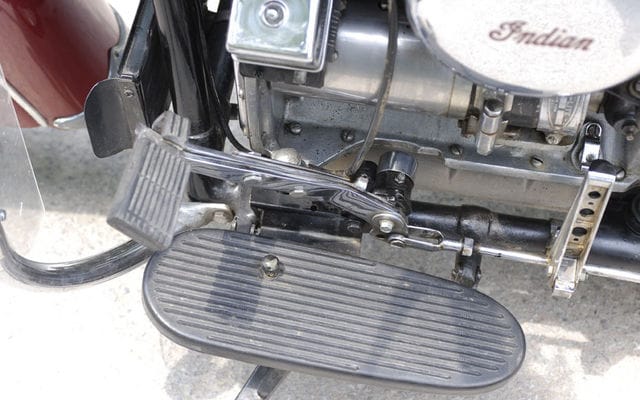 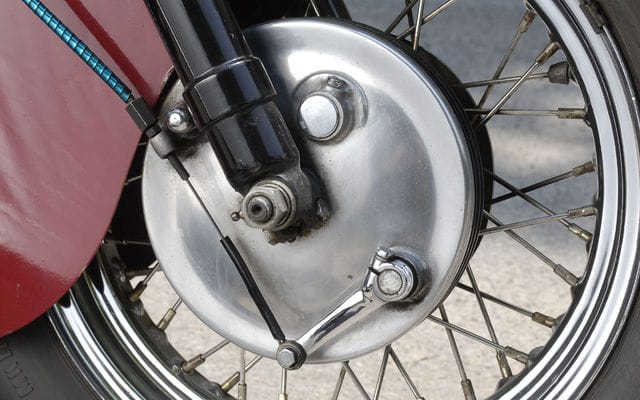 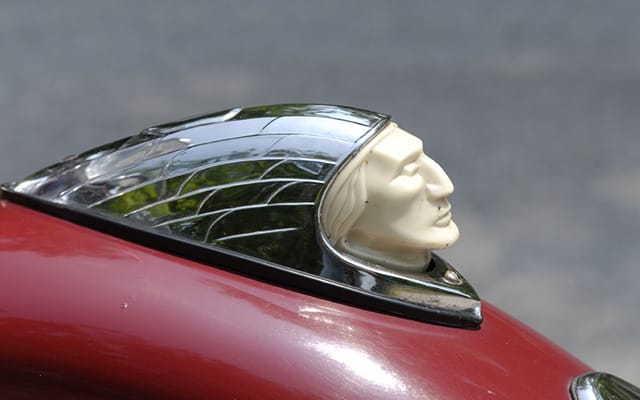 While the four-cylinder engine idles for a final time, I rehearse the routine. The left foot works the clutch, the left twist grip advances and retards the spark and a lever alongside the fuel tank -selects the gears. But even more peculiar than the unusual (by modern standards) controls on this 1940 Indian Four is that I’m about to ride it at all.

This was Charlie Mahoney’s motorcycle; the bike he was photographed with for an April 2004 Cycle Canada story. This is the bike that he built half a century ago from an engine pulled out of a makeshift garden tractor, and I have the same feeling as when I cleaned out my father’s wallet after his death. Less a sense of inappropriateness—my father wasn’t secretive and Charlie would have welcomed my ride—than just the cold realization that possessions are oblivious to loss of life.

Charlie died in 2004, and I half-expected his motorcycle to slip out the back door of the garage and join him, but here it is, about to be subjected to far less confident hands than those of its master.

Years ago my father and I had an Indian, a 1947 V-twin Chief, so I’m not entirely without experience in riding a foot-clutch hand-shift motorcycle. But I’ve ridden too many new motorcycles in the interim, and just kick starting the Four ties me in knots.

Unlike V-twin Indians and most other bikes with a conventional right-hand kick-starter, the Four has a left-hand kick-start lever, but you can’t just straddle and kick. With a right-hand lever you stand on the left leg and swing with the right, but leaning on a side stand a left-hand kick-start lever falls away from you, so when I first try to kick while straddling my left foot paws the breeze, unable to find the pedal. Then I stand alongside its left flank, but the angle is wrong for my preferred right leg. The answer is to kick with the left leg crossed over the right leg, a position that resembles a dance step from Oklahoma, and I’m thankful when the Four spins easily and starts.

Through the long tailpipe comes a sound just as unusual as the starting procedure. The stroke, at 3.25â¯-inches, is an inch longer than the bore, and combined with a heavy flywheel the 77 cubic-inch (1,262 cc) engine has the low-down burble of a Chris Craft’s through transom exhaust.

While a four cylinder may seem an exotic engine configuration for a motorcycle nearly 70â¯years old, the inline-four was, along with the more familiar V-twin, a staple of early American motorcycle design. Indian produced a range of singles and twins from its founding in 1901, but the purchase of the Ace motorcycle company in 1927 allowed Indian to re-badge Ace’s four cylinder and add it immediately to its lineup. Indian would update the Four throughout the 1930s but it wouldn’t make it through the Second World War; production ended in 1942. In a generous move that would have pleased her father, Mary-Jo Mahoney, who inherited the bike, has since his death invited Charlie’s riding friends to sample his motorcycle, and today it’s my turn.

Most vintage hand-shift Indians and Harleys have for a clutch a rocker pedal above the left footboard. The pedalâ¯stays in the desired position—forward to disengage and rearward to engage—either through a mechanical advantage, like Harley’s rat trap or through friction like on some Indians. This type of clutch allows you to place both feet on the ground while the transmission is in gear.

It sounds complicated but it isn’t. To pull away from a stop you roll your ankle rearward while feeding in throttle. But the Four is different, as it has an automotive-style spring-loaded clutch pedal, commonly known as a suicide clutch in motorcycle terms, which means that if you’re pulling away from a stop and lose your balance and put your left foot down the clutch fully engages and the bike bolts.

A scrape with a car in the 50s gave Charlie a life-long limp, and his modification to compensate for his severely damaged left leg—a hand clutch lever to work as an assist to the foot lever—settles my nerves. The hand lever won’t disengage the clutch on its own (you still need to use the foot pedal) but it would at least slow the inevitable in a tip over.

Modern motorcycles allow impatient riding styles, but the Four is forcing me to slow down. With the engine running I roll the left twist grip forward to retard the spark and slow the rpm to a crawl, my guess is well under 1,000 rpm, which allows a deliberate tug rearward on the shift lever to cleanly select first gear. The revs pick up when I advance the spark and with a little throttle and the release of the clutch I’m underway.

Indian’s Four was a machine with a reputation for frailty and unresolved design weaknesses. The original clutch had grabby metal on metal clutch plates, but Charlie’s clutch is smooth and progressive, and his clutch cure illustrates his homespun ingenuity. Charlie inserted homemade clutch plates made from Masonite between the metal plates, because, as he once explained to me, though Masonite dissolves if exposed to water, if it’s in an oil bath it has ideal properties for a clutch. It’s also durable—the Four has had the same clutch for decades.

The other criticism of the Four was about its overheating. While four cylinders in a row allow a striking view of the exhaust and the narrowness of a single cylinder engine, it’s obvious that the rear cylinder receives less cooling air than the front. “They run hot, but when they’re hot they run well,” Tom Wilcock tells me. Wilcock, who in 2004 drove his identical 1940 Four from Southern Ontario to Alaska and the Yukon, dismisses the notion of the Four’s delicacy. Charlie’s Four has an aftermarket oil cooler, but surprisingly Wilcock’s doesn’t, even though hammering through the heat of the prairies caused his exhaust valve springs to become so hot that they lost their temper and could be compressed by the fingers.

While the Four looks like a bulky heavy motorcycle, from the saddle it’s nimble and narrow. Just as on the V-twin Chief, the shift from first to second is difficult to do without crunching, but the transition from second to high in the three-speed gearbox is quiet and smooth.

Power is less than expected, without the immediate torque of a well-tuned twin, and the Four is very different from today’s engines. The flywheel is so heavy that momentum is built gradually, but once you’re up to speed there is the sense that you could go on forever. When you roll off the throttle there is absolutely no engine braking. It’s like closing the throttle on the Queen Mary; engine noise disappears but you continue at the same speed. It caught me by surprise as I approached a turn, but I was in for an even bigger surprise when I squeezed the front brake, because, once again, nothing happened.

I’ve ridden my share of old motorcycles, but the single leading shoe front drum is the worst brake I’ve experienced. And don’t nail your foot on the rear brake because it’s overly sensitive, but if you’re careful in its modulation the Indian’s low centre of gravity and long wheelbase allow it to be an effective stopper.

Tom Wilcock told me that the Four is his favourite motorcycle because of its smoothness. “You can read the license plate of the car behind you in the rear view mirror at 60 mph,” he says. Even by modern standards the Four is smooth, but compared to contemporary pre-war singles and twins it must have been astonishing. Modest power means that the engine is working hard at 60 mph, but there is no vibration. Charlie used to say that the Four at speed is like putting your hand on a stereo receiver—you can feel the hum of something going on, but it stops short of vibrating the fingers.

If the engine’s sophistication is a surprise, the cycle parts are a disappointment. The plunger rear suspension is without damping, and while cornering at a moderate clip steering corrections must be made as the rear wheel struggles to maintain alignment. But handling is light and the geometry allows neutral steering, though the chunky 16 inch tires have squared-off and handling would benefit from new rubber.

The fork on Charlie’s Four is from a post-war Chief; his would have been fitted originally with a trailing link elliptically sprung fork, and the hydraulic fork is representative of early telescopic units and is under dampened and softly sprung.

Relatively few Indian Fours have survived, and those that have often lead pampered lives because of their rarity and subsequent value. Charlie’s Four may be worth as much as $60,000, but to Charlie its worth was only as a functioning motorcycle. He was always experimenting to make it run better or more reliably. Once I walked through the door of his shop and he was rolling a Honda piston over in his hand, wondering if it could cure a smoking problem if modified to fit. Charlie knew that technology marched on after the demise of the Four, but while everyone else went running after the latest and greatest, Charlie pulled a chair up to the woodstove in his shop and looked across to his Four, secure in knowing that he had found what he wanted.