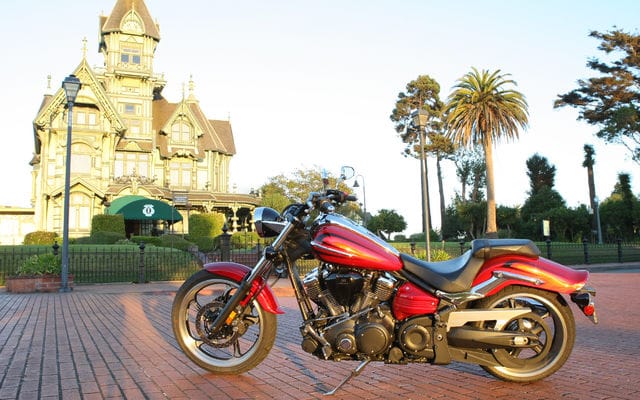 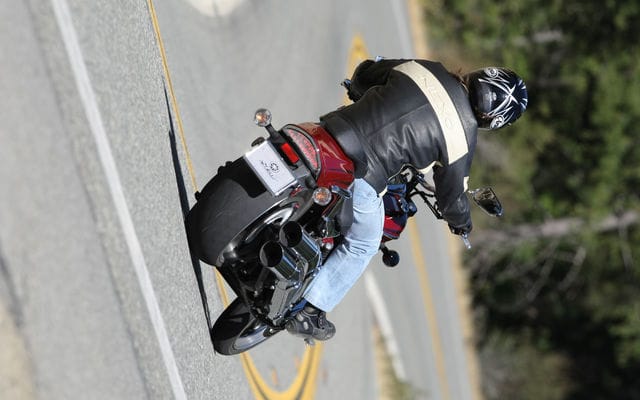 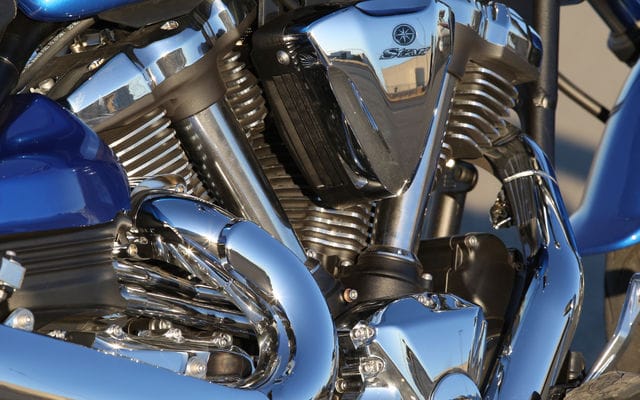 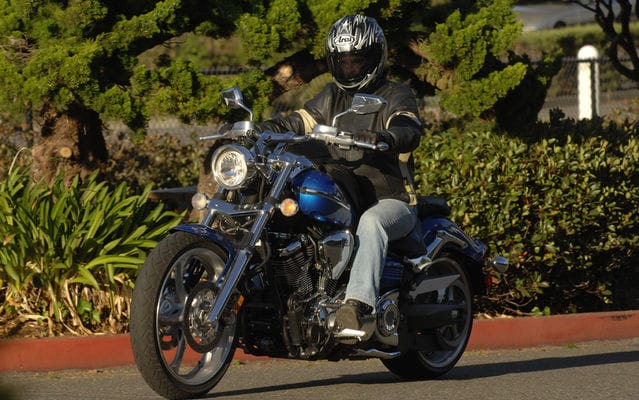 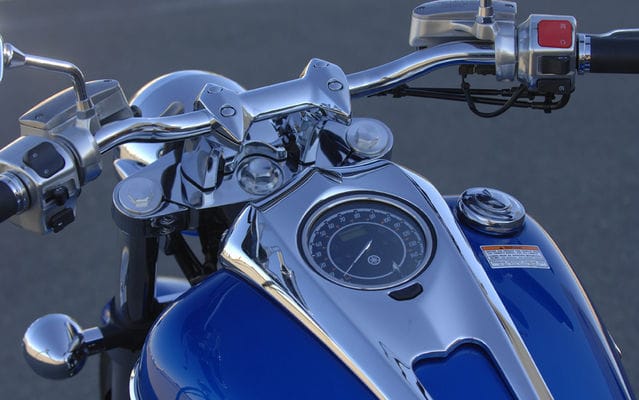 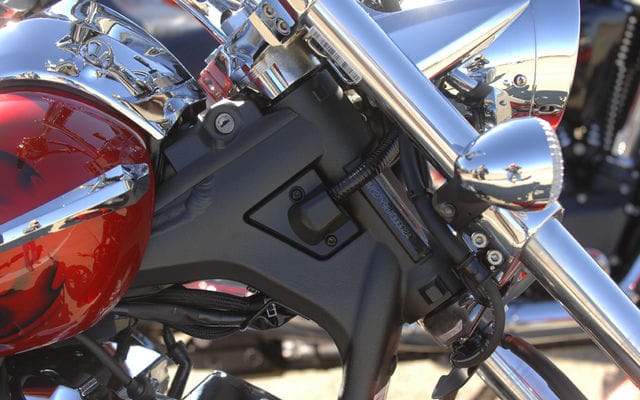 Yamaha is arguably one of the more daring of the Japanese manufacturers when it comes to launching new products. In fact, with all due respect to Willie G. and the folks at Harley-Davidson, a viable argument could be made that by introducing certain key models, notably the early 1980s Specials and Viragos, Yamaha was instrumental in launching the metric cruiser trend that dominates the North American market today. You can chalk up such success to making excellent use of market research. Part of Yamaha’s marketing research included looking into the American custom bike phenomenon, specifically focusing on the recent resurgence of bobbers, choppers and drag-style bikes. Yamaha identified certain key styling elements common on true custom bikes, including a pronounced fork rake, high-mounted fuel tank and a ‘sit in’ rather than ‘sit on’ riding position. Labelled as a “modern performance custom”, the XV1900 is Yamaha’s entry into a market in which customs (with raked out front ends, large diameter front wheels and narrow profile) currently outsell classics (with fat forks, skirted fenders and heavyweight presence) by a two-to-one margin.

Enough Marketing 101; what of this new performance custom? Well, at the heart of the XV1900 is the same 100 x 118 mm bore and stroke, 1,854 cc, air-cooled 48-degree V-twin engine introduced in the Roadliner. The two engines are virtually identical save for the XV’s use of a 2-1-2 exhaust configuration with dual catalytic converters (versus the Roadliner’s two-into-one setup and single catalytic converter), and the elimination of the oil cooler (strictly for aesthetic reasons). The XV keeps the pushrod-actuated four-valve, twin-plug heads, EXUP valve, closed-loop EFI system, dual counterbalancers, five-speed gearbox and hydraulic clutch. It also pumps out the same massive 123.7 lb-ft of torque at just 2,500 rpm. Belt drive is also retained, although the XV gets a new narrower, carbon-fibre-reinforced belt and slightly taller gearing. Aside from light weight and clean, maintenance-free operation, another reason given for retaining the belt is that it eases the replacement of the wheels, which are among the first items custom builders change.

Solid engine mounting in the aluminum frame provides a rigid and relatively lightweight chassis. The swingarm, also made of aluminum for reduced unsprung weight, is connected to a preload-adjustable horizontally mounted shock delivering 90 mm (3.5 in.) of travel. A conventional 46 mm non-adjustable fork is used to generate 130 mm (5.1 in.) of stroke at the front. The rest of the front end, however, is anything but conventional.

Achieving the desired low-slung chopper look meant raking out the front end, but this typically comes at the expense of high steering effort and slow turning response, two trade-offs that Yamaha engineers were unwilling to make. Offset tripleclamps incorporate a 6-degree offset to the steering neck’s 33.2-degree rake to deliver a total rake of 39.2 degrees. Together with the 21-inch front wheel, the result is a chopper look more representative of boutique customs, while maintaining trail at a reasonable 102 mm for responsive handling, an important consideration on a bike with a 1,799 mm (70.8 in.) wheelbase.

The XV also comes with a sizeable 210/40-18 radial rear tire. Why only a 210 mm wide rear tire when some competitors are running 240s and 250s? Simply put, Yamaha engineers feel that wider rear tires enact too steep a price on handling. We are told, however, that there is room for a wider tire should owners be inclined to install one. A low-profile 120/70-21 bias-ply front tire is used, a choice guided by the preferred flex characteristics of the bias construction for this type of application.

While awareness of the technical dimension and origins of a model can make for interesting reading, these matters can quickly fade into irrelevance if the end result is not up to par. Fortunately, the XV1900 lives up to the promise of rider-friendly handling characteristics. After arriving in California, my first contact with the XV comes after a short flight north from Santa Monica to Red Bluff (aboard a Gulfstream G2 private jet, no less), where Yamaha personnel and a fleet of new XV1900s await. The oddly named town is the departure for our westward journey along sinewy and picturesque Highway 36, a formidable setting for the launch of a new motorcycle.

A quick walk-around reveals impressive attention to detail. Wiring is cleanly routed, as evidenced by the new steering head design, which routes the wires internally for a clean look. This is but one custom touch that draws your attention to the more significant and stylish components, like the artfully sculpted hand and foot controls, and the stylish seamless gas tank that sports a total capacity of 15.5 litres (including the auxiliary tank located under the seat). The main gas tank sits high on the frame, leaving the nicely finished engine in prominent display. Fit and finish are first-rate with clean welds, flawless paint and attractive designs. A gull-wing shaped lower tripleclamp and tank-mounted multi-function instrumentation round out the package.

In order to deliver the classic arms-and-legs-out riding position (which Yamaha aptly calls the “show-off cool pose” in press literature), low-bend handlebars are mated to tall risers, foot controls are positioned well forward, and a dished saddle contributes to the low seat height of 695 mm (27.4 in.). Sitting astride the XV1900, you immediately notice a comfortably supportive seat and short reach to the ground. The handlebar is wide and places the rider in a slight forward stance. The hand levers are wide and well shaped, with a comfortable and natural feel.

Hitting the starter button quickly brings the big twin to life, its fuel-injection system not requiring any fiddling with a choke or fast-idle lever. Throttle response is instant, although the loping long-stroke engine will never be mistaken for a Ducati 1098 in the way it gains revs. Sound emitted from the twin down-swept pipes is a deep, yet not excessively loud offbeat staccato so coveted by cruiser-philes. With the signal being given to ride off, I pull in the light-action clutch lever and quickly find myself searching for the shift lever, tapping aimlessly about before finally clueing in to its position—it is forward, way forward, almost too much so for my five-foot-eight frame. With the selector depressed and the crisp-shifting transmission giving its customary clunk, I’m underway. Throttle response is smooth with the on/off transition being quite seamless. While there is a slight presence of compression braking when releasing the throttle, it is by no means unsettling. Rolling on the throttle and short-shifting up through the gears generates spunky acceleration for a bike of this size and weight. There is no tachometer, and none is needed on an engine with such abundant low-end power. Passing requires only a mild twist of the throttle as the engine responds with a smooth, yet forceful push forward.

Once up to highway speed, the engine settles into a pleasant and relaxing rhythm, the dual counterbalancers working as promised and eliminating any semblance of disruptive high-frequency vibration, while letting the pleasant low-amplitude throbbing through. Unfortunately, the mirrors do not fare quite so well, becoming blurred in that critical 90-110 km/h range; at speeds either above or below they work well, providing a clear rear view. The fuel tank mounted instrumentation, although allowing an uncluttered forward view requires one to temporarily look away from the road ahead to read, not exactly a desirable scenario. On the positive side, information is easy to decipher, and the function selector button (located on the leading side of the left handlebar) is easy to reach and use.

As claimed, the slightly forward riding position works quite well for combating wind pressure, proving less tiring on the arms than the quintessential laid-back cruiser stance. The seat’s firmness does begin to exert a toll on the rider as the kilometres accumulate, though it is by no means unbearable. Thankfully, the suspension does a good job of soaking up bumps and the handlebar has a comfortable bend. Straight-line stability is excellent and cornering behaviour is better than expected, the XV holding its line in corners and not requiring constant correction. The offset tripleclamps, aided by the low centre of gravity and wide handlebar, work as promised to generate surprisingly light and responsive steering, this in spite of the fat rear tire and long wheelbase. In fact, the XV is noticeably more responsive than competing models equipped with the combination of a wider rear tire and quicker steering geometry. Cornering clearance is decent as well, and will surely be plenty for the Custom’s typical buyer, who most likely won’t be trying to scrape knee sliders. The only handling caveat relates to some wallowing in bumpy corners, the product of a soft suspension struggling to cope. Light spring rates used in the fork also allow significant dive when the brakes are applied. Light damping makes itself felt when the front end pogos up and down somewhat after coming to a stop. Slowing down the 314 kg (691 lb dry weight) XV are dual 298 mm front discs with monobloc four-piston calipers and a 310 mm rear rotor with single-piston caliper. The brakes work well although a healthy squeeze is required for serious stopping. The rear binder is strong without being prone to locking up.

Yamaha marketing personnel closed off their presentation by citing that the average cruiser buyer spends $3,000 on added accessories, 60 per cent of which is spent at the time of purchase. It comes as no surprise, then, to learn that the Star accessories catalogue lists 36 new part numbers for the XV1900. Modern computer-aided design allowed the accessories department to get involved early on in the project, the result being not only an OEM level of fit and finish, but also the incorporation of mounting structures in the design of the bike itself. Yamaha wisely chose to bring along a well-equipped Custom S for the ride, with an added seat with rider backrest, a luggage rack with sissy bar, a windscreen and a tank bag; a poster child of sorts for the accessory catalogue. And Yamaha hopes buyers will refer to the catalogue when signing up for a new $17,999 Custom, or for the $18,499 Custom S (loaded with factory chrome detailing), and count on accessorized XV’s to be a popular sight on the highways next summer.

Perhaps choosing Eureka as the final destination of our ride made perfect sense, as I discovered that riding the XV1900 was pleasant and quite entertaining, proving itself a very capable modern performance cruiser, despite its radical chopper styling.