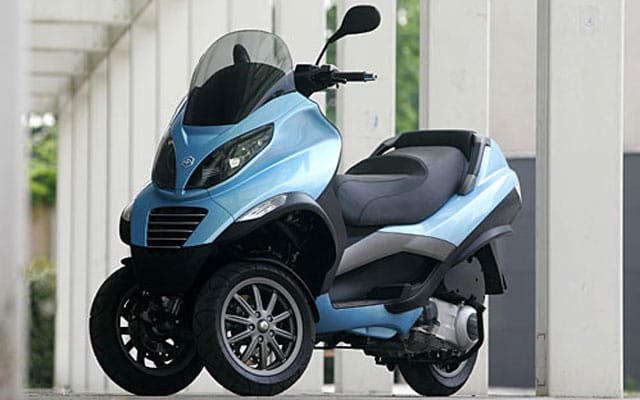 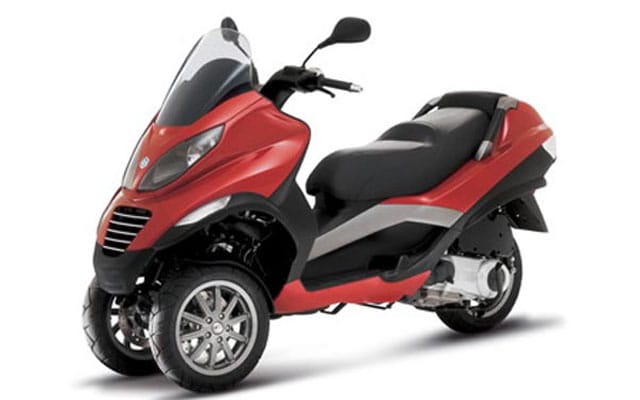 In April we brought you BRP’s Spyder, but Piaggio’s MP3 adds a third wheel in a different way—without losing the lean. Lansdowne Avenue meets St. Clair Avenue at one of the nastiest intersections in Toronto. Four sets of railway tracks converge and loop into a streetcar turnaround, and from half a block away suspensions can be heard angrily bottoming as cars hydroplane across tracks then sink into potholes. On a conventional motorcycle you approach with trepidation, but on cold tires on an 8-degree spring day, the throttle of the Piaggio MP3 is gunned at an amber light and cornering is done at full lean. The oddball front-end tiptoes across the wreckage and westward we go, eyes wide and body intact.

When initial photographs from Europe surfaced it seemed like the MP3 was an exercise in Italian design excess. Who needs two front wheels when bicycles and motorcycles have for generations had one? Sometimes the cleverness of designers outpaces the needs of riders, but all it took was one hellish intersection for the merits of the design to shine. Front wheels of conventional motorcycles are capable of considerable lean angle—racers nearly touch elbows to tarmac and street bikes corner beyond the skills of most riders. But the caveat, and it’s a big one, is this: under ideal conditions—but rarely do pubic streets offer ideal conditions. Cold tires on cold pavement with a dusting of yet-to-be-washed-away grit from winter sanding can make the road as slick as a water slide, and the ramifications from a rush hour tumble are more than just scuffing the shine off your wingtips.

Consisting of four cast aluminum arms mounted centrally to the frame, the parallelogram front suspension, as the name suggests, cants the wheels in unison into a turn while the aluminum arms remain parallel to each other and the ground. It sounds complicated, but in practice it responds just like a skier changing direction. As the skier leans into a corner, the knee bends to shorten the inside leg and the outside leg extends to keep the ski on the snow. Just like our skier, each wheel of the MP3 is suspended independently and has 85 mm of travel; one wheel can absorb a bump while the other is extending down into a pothole, and claimed maximum lean angle is an impressive 40 degrees. The MP3’s rear wheel is suspended by a traditional scooter-style swingarm with 110 mm of travel, with dual shock absorbers adjustable for preload. It is reasonable to expect that an additional wheel and the added weight and complexity of the MP3’s front end would adversely affect agility, but from the saddle the technology is doubly invisible—you can neither see the front wheels nor sense their presence. With 12-inch wheels front and rear, road feedback in normal riding is typical of small-wheeled scooters, with a slight vagueness and a tendency to fall into corners. And while handling and braking remain comparable to a traditional scooter, as the pace quickens what astounds is the available grip. We try to fall off the MP3 but can’t do it, despite flailing about in an abandoned industrial parking lot covered with sand, paper coffee cups, dog poop and soggy leaves leftover from last fall. The harder we corner the better it sticks, and the only unsettling moment is when it shimmies slightly at full lean when one wheel crosses a pizza box.

Braking is also transformed by the addition of the third wheel. Piaggio claims braking performance is 20 per cent better than a two-wheeler, but that statistic doesn’t reflect that most riders are hesitant to approach the traction limits on two wheeled vehicles for fear of locking the front wheel. The MP3 has dual front 240 mm floating rotors with twin piston calipers and a single 240 mm rear rotor with single piston caliper. While the additional wheel adds rubber to the road and another rotor and caliper, what really transforms braking is the added stability, as you’re able to fully exploit the MP3’s stopping power. Furiously squeezing the scooter-style dual brake levers howls front and rear tires but the MP3 tracks in a straight line, squirming no more than a car braked similarly hard.

Claiming 22 horsepower, the fuel-injected four-valve liquid-cooled 244 cc single is lifted from the Vespa 250 GTS. (Piaggio is Vespa’s parent company.) In the Vespa, the engine makes for stunning performance, by scooter standards. In a CC test, the GTS maintained an indicated 130 km/h with two full-sized male riders aboard, but the Vespa weighs a claimed 148 kg (326 lbs), while the MP3 is a portly 204 kg (450 lbs). Motorcycle enthusiasts are greedy for performance; a humble 500 cc twin has quicker acceleration than most cars and enough speed to endanger your license. But scooters do not have performance in excess, and how fast you can go determines where you can ride. In the city the MP3 has plenty of power, though a hesitation just off idle is a complaint we have of CVT-equipped scooters of all brands. On the highway the MP3 reaches an indicated top speed of 130 km/h, but a gentle grade lowers that to a sucking-wind 110 km/h. This makes the MP3 barely manageable for major highways, and if you foolishly find yourself in the fast lane as your exit approaches, as we did, you don’t have the option of powering your way to a gap in traffic. Instead it’s necessary to tiptoe through cars with drivers’ agape at the oddity you’re riding. Of all the machines we’ve ever ridden, the MP3 generates the most bewildered response.

Elderly ladies peer over bifocals, a distracted tow truck driver thumps into a curb and a young man in a low-rider Cadillac hangs his head out the window and yells, “It’s gully,” which leaves us bewildered. Even more than the BRP Spyder three-wheeler on the cover of the April issue, the MP3 confounds the public. As unusual as the Spyder is, the stance of its front wheels is recognizably close to a car, but not so with the MP3, its narrow front track makes it look like it’s about to flop over. Adding to bystander confusion is an electro-hydraulic suspension system that locks the tilt mechanism. Primarily designed as a parking device, it allows the front suspension to hold a vertical position, dispensing with the need for a centrestand, though one is fitted, as long-term parking drains the battery. As a parking aid, it’s a stroke of genius, as a poke at the thumb-operated switch on the right handlebar cluster locks the suspension once you’ve pulled into a parking spot. No more fumbling for prop stands or searching for level terrain to support a centerstand.

Less useful but more amusing is the ability to keep the scooter upright while it’s in use. The tilt lock can only be engaged, according to Piaggio, when the throttle is closed, engine revs are under 3,000 rpm and speed is under 15 km/h. It will lock as you’re rolling to a stop if you thumb the button when you’re moving at a walking speed. This means it is possible to roll to a stop without touching feet to the ground, though you need good timing to lock it before speed drops so low that the MP3 flops over. When the light turns green and the throttle is twisted, the system automatically disengages as the walking pace is again reached. In practice, it’s easier to put your feet on the ground than to fiddle with the locking mechanism, but it’s convenient if you’re stranded at a long light.

Scooters are about convenience, and under-seat storage makes them practical for commuting or shopping. The MP3 has an automotive-style key fob release for the 65-litres of storage capacity beneath the hinged seat. The tiny trunk is opened separately by pushing and turning the key in the ignition, though much of the time when we wanted to open the trunk we inadvertently opened the door to the gas cap. The trunk space is joined to the area beneath the seat by an opening, so it’s possible to fit cylindrical items of up to three feet, like exceptionally long baguette or a slender wooden leg. Piaggio claims two full-face helmets will fit beneath the seat, but it balked at holding one tester’s XL Arai.

Cockpit space, perhaps due to the room required for the bulky front suspension, is a little smaller than on comparably sized scooters, and though the seat looks generously padded, it has its limitations. It is less an issue for our slighter testers, but the six-footers among us complain of numb tailbones from the lip at the rear of the rider’s portion of the seat, especially at highway speeds where a slight crouch reduces windblast but forces the buttocks rearward.

Predictably, the MP3’s sophistication comes at a price. At $8,995 it’s $1,500 more than Vespa’s GTS 250 and $1,000 more than either Yamaha’s Majesty 400 or Suzuki’s Burgman 400, two machines with superior highway performance—but the MP3 cannot be directly compared to its competitors. Piaggio has addressed a front wheel’s weakness to skitter across the cobblestones, while retaining the dynamics of a conventional two-wheeler, and that’s what makes the MP3 the undisputed king of the commute.