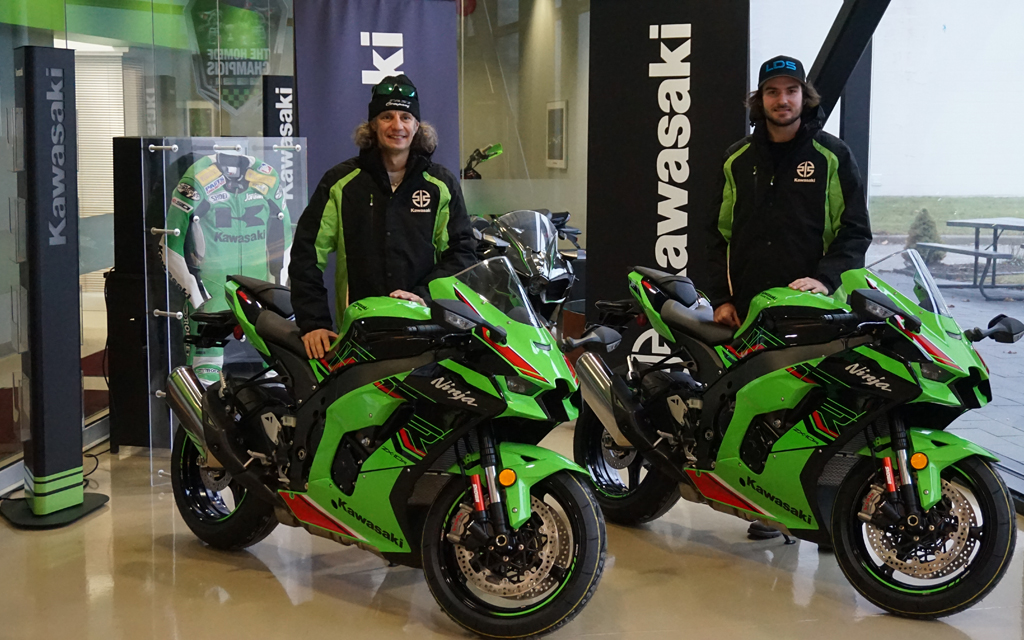 Fourteen-time Bridgestone Canadian Superbike champion Jordan Szoke will once again ride a Kawasaki Ninja ZX-10R in his quest for the 2023 Bridgestone CSBK title.

Szoke was unable to contest the 2022 season after a devastating motocross crash that left him with serious lower leg injuries. Now, after multiple surgeries, The People’s Champion will return, this time headlining a two-rider team out of the Waznie Racing stables.

Reigning Pro Sportbike champion Trevor Dion shocked all comers by claiming pole position in his maiden Pro Superbike event at Grand Bend in 2022, before stepping away from the 1000cc class to focus on the Pro Sportbike title aboard his Ninja ZX-6R.

Having claimed the 600cc class title, Dion will make the step up to the premier category aboard an identical Ninja ZX-10R to that of Szoke.

“This is an incredible opportunity for me and looking back on my racing career I would have never seen anything like this happening,” said Dion.

“I think that with Jordan and I as teammates, both of us will be able to learn and bounce feedback to one another and through the team to be able to push Kawasaki to the top. I’ve been racing Kawasaki bikes since my career has started and to be able to start my full-time superbike season with them is definitely a treat.

“I look forward tremendously to the upcoming season, and I can’t wait to step into the pits to an unreal team of knowledge, experience and results with new and continued sponsorships, aboard the Kawasaki ZX-10R.”

Szoke’s history with Kawasaki started back in 1998 when he scored his first National Superbike Championship with Team Green at only 19 years old. He has since won 78 races and 14 titles, making him the winningest pilot in series history.

In 2023, Szoke will not only make a historic comeback, but help foster the next generation of Canadian talent.

“I am really excited to try and get back on the track after my injuries last year,” said Szoke.

“I’m also excited to expand our team and Kawasaki’s involvement. Trevor is a great young racer. And a great young man. We really look forward to helping him become a champion.”

Szoke will be riding a 2023 Kawasaki Ninja ZX-10R. The most recent generation of the ZX-10R feature World Superbike-derived technology including integrated aerodynamic winglets and a razor-sharp chassis.

Bridgestone Canadian National Superbike Championship confirmed a five-event calendar for 2023 with the season opener scheduled for May 19-21 at Shannonville Motorsports Park.