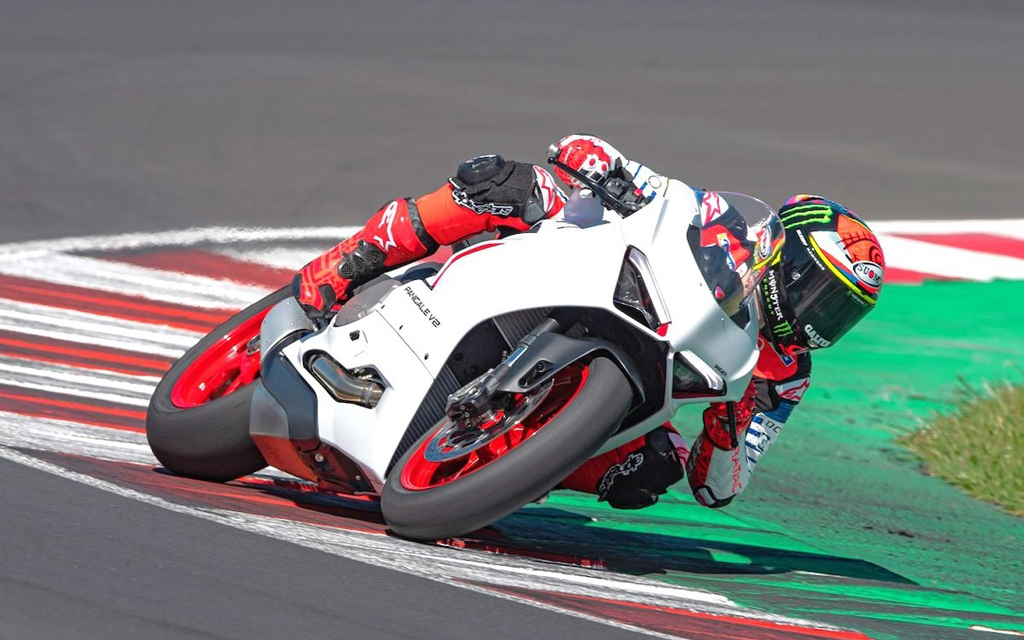 Previous middleweight Ducati twin cylinder offerings include the successful 899, and the history of this model can trace its roots to the legendary 1970s 750 Super Sport. The title Panigale comes from the northern Italian suburb in Bologna that is home to the Ducati brand’s headquarters.

“We are excited about the Ducati Panigale V2 competing in the Sport Bike division of the CSBK Nationals in 2023,” confirmed Bradley Goodbody, Marketing and Communications Manager for Ducati Canada.

“Ducati won the MotoAmerica Supersport category (Similar to CSBK Sport Bike) with Josh Herrin on a Panigale V2 in 2022, and we look forward to seeing our twin join the competition in Canada in 2023.”

The Ducati Panigale V2 will likely become a benchmark offering in the Sport Bike category, since the stock model comes very close to matching the specific guidelines for the class.  Sport Bike entries must weight no less than 350 pounds, wet, and produce no more than 125 horsepower on the official series Dynojet Dyno, as operated by series partner Brooklin Cycle Racing of Pickering, ON.

It will be the responsibility of each competitor or team to ensure that their machine meets these post-race measurement guidelines.  Brooklin Cycle Racing will also offer several options for controlling the performance of the potent Ducati twin, and competitors are free to come up with physical/mechanical or electronic procedures to ensure rules compliance.

“The homologation of the Ducati is an important step in our update of the middleweight format,” explains CSBK boss Colin Fraser.  “We are looking at other changes in Liqui Moly Pro Sport bike series, and everyone from racers to fans are excited by the current competitive nature of this division – the Ducati Panigale V2 can only add to the drama at the front of the field.”

The 2023 Bridgestone CSBK Championship tour hosts an invitational pre-season test for all six series classes at the JenningsGP venue in North Florida, March 14-15, 2023.  The CSBK National tour opens at Shannonville Motorsport Park, east of Belleville, ON, on the Victoria Day weekend, May 19-21.