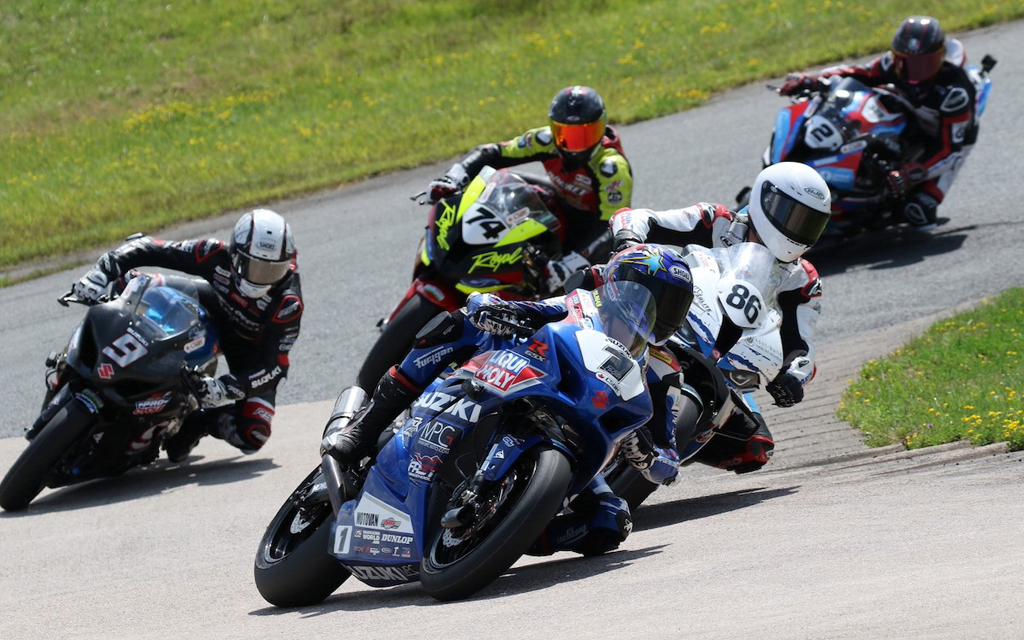 The Bridgestone Canadian National Superbike Championship series will feature five events in 2023, a return to a full pre-pandemic calendar. Each weekend will host all six national classes that compete in the CSBK National tour, with “doubleheaders” (one race Saturday and one race Sunday) for the two featured Pro categories, Superbike and Liqui Moly Pro Sport Bike.

Every Pro Superbike and Pro Sport Bike races in the 2023 Bridgestone CSBK series will be broadcast on The Sports Network (TSN), Canada’s premier sports television channel. CSBK first appeared on TSN in 1995.

For the third year in a row, the weekend at Canadian Tire Motorsport Park in August will provide three full points races for the top Pro Superbike class, a rare “tripleheader”. So far, no competitor has earned all three race victories at “old Mosport,” with 2021 national champ Alex Dumas (Suzuki) of Quebec City and newly crowned 2022 overall winner Ben Young (BMW) of Collingwood, ON, trading victories.

Both Dumas and Young, the only two feature Superbike winners in 2022, have earned “King of Mosport” honours, awarded to the Pro with the best overall finishing order over the three main races.

Canada’s most accomplished Superbike rider, 14-time champion Jordan Szoke of Lynden, ON, is expected to challenge the Young/Dumas rivalry up front next year after missing the entire 2022 CSBK season due to injuries suffered while training.

As previously announced, the tour will begin with a much-anticipated return to historic Shannonville Motorsport Park on the Victoria Day weekend, using the perimeter Pro layout.

Next up is a trip to Ontario’s “west coast” at Grand Bend Motorplex, where an official series Thursday Test will lead into three days of competition using the technical layout.

CSBK are back on the east coast at famed “Shubie” in July, the traditional date for the national event at Atlantic Motorsport Park in Nova Scotia. In 2022, events at the venue near Shubenacadie, NS were pivotal in deciding the season-long points battle between title rivals Young and Dumas.

August is the month for CTMP, the fan-favourite venue that hosted the FIM Canadian Motorcycle Grand Prix back in 1967.  Providing the unique triple header format, “old Mosport” is likely to be critical for the championship chase, only this time as the penultimate round as opposed to the traditional finale.

The 2023 Bridgestone CSBK series will instead finish back at Shannonville, the 23rd time the series has completed the tour at the former “Nelson International” circuit. The first SMP national was the second-ever Canadian Superbike weekend back in 1980, where Mississauga, ON’s George Morin clinched the inaugural crown for Kawasaki at Shannonville 43 years ago.

CSBK will continue to provide further news and updates for various items including homologated machinery, rules updates, and details of the March 2023 invitational Bridgestone Test at JenningsGP in north Florida, in the near future.