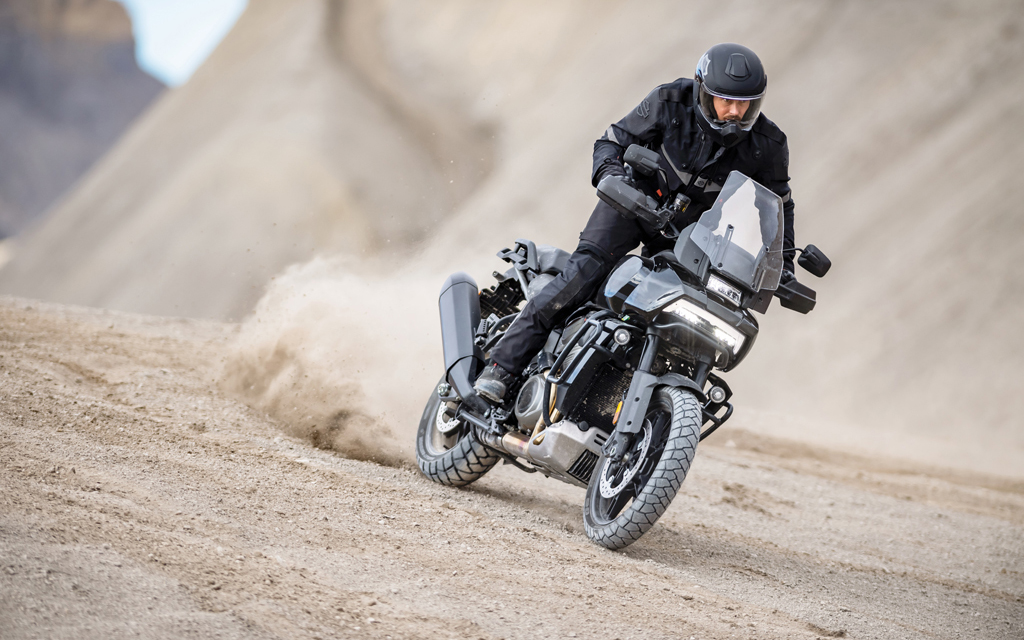 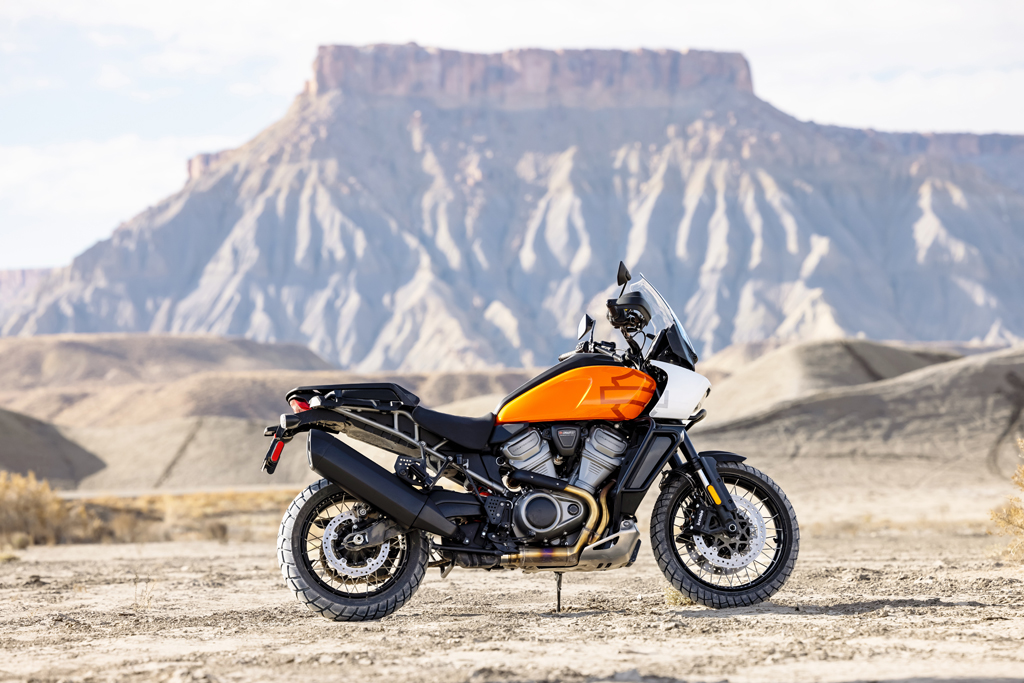 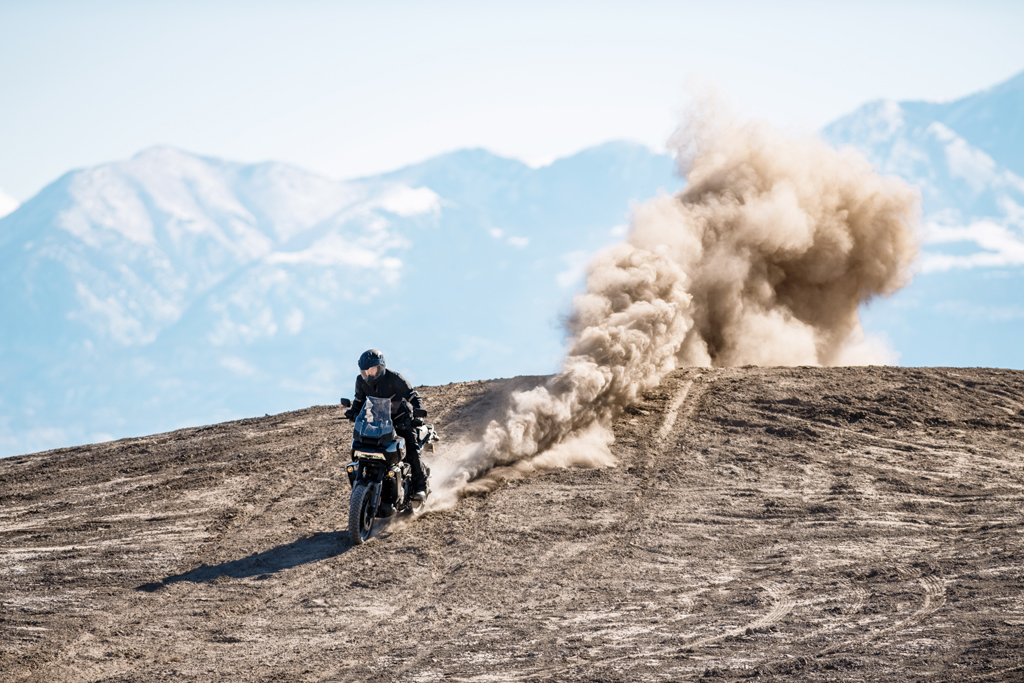 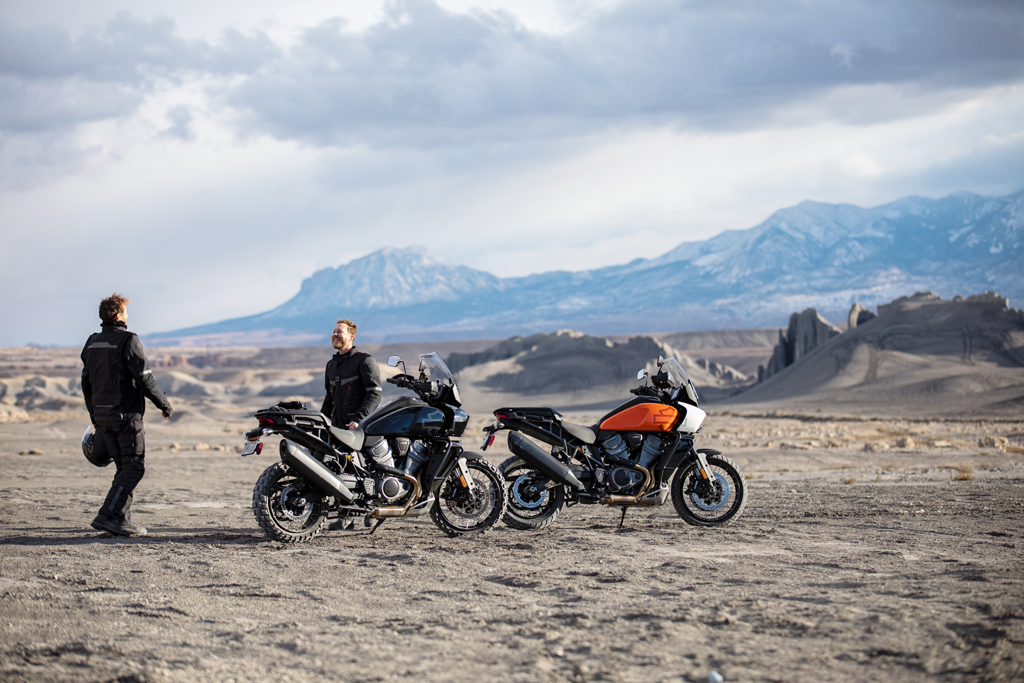 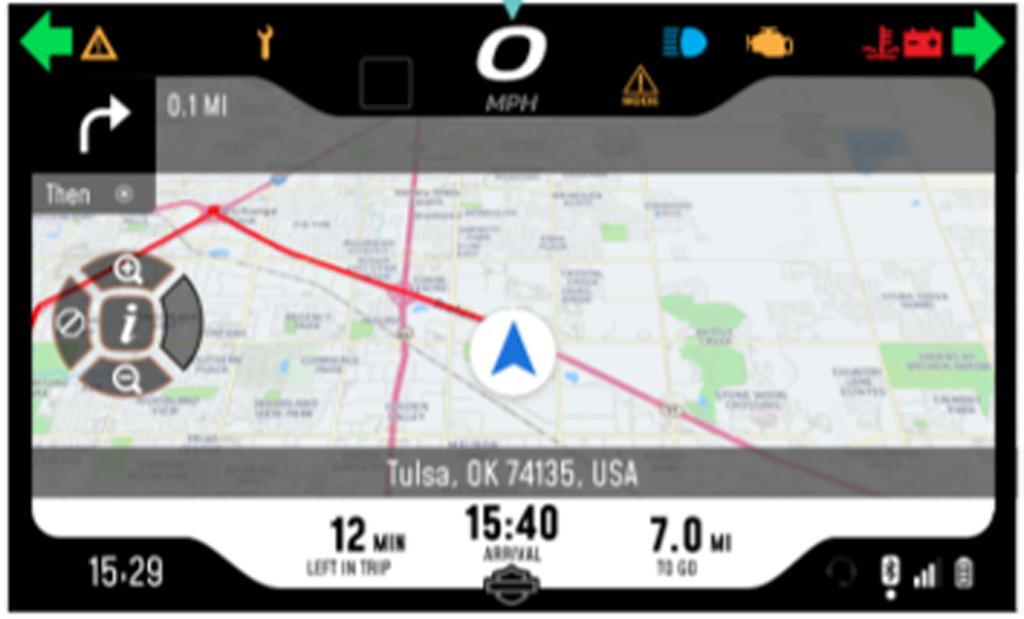 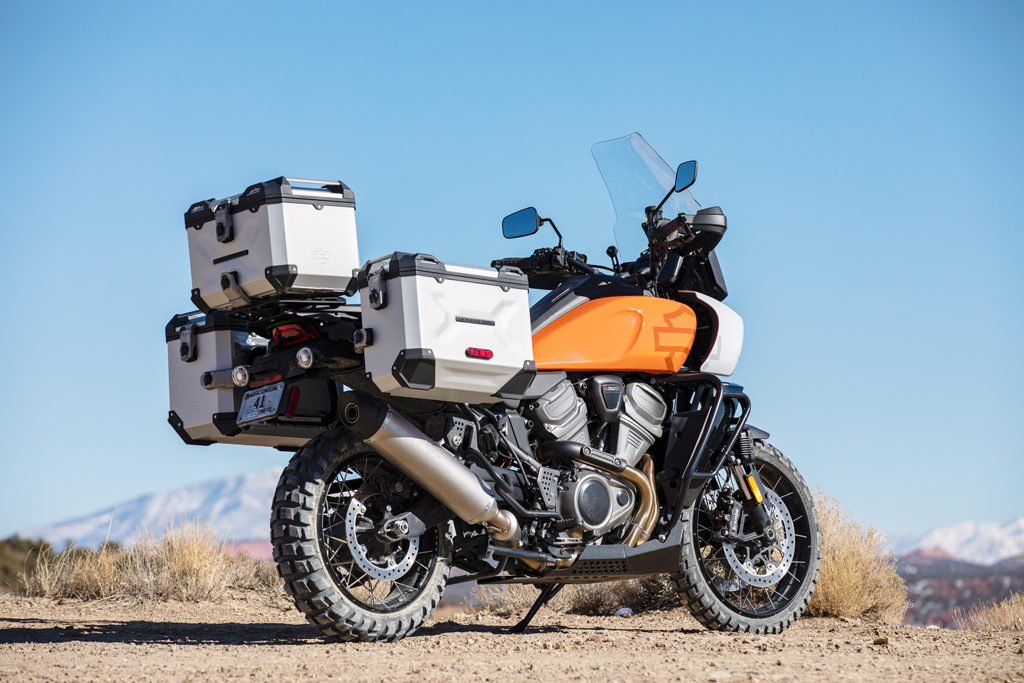 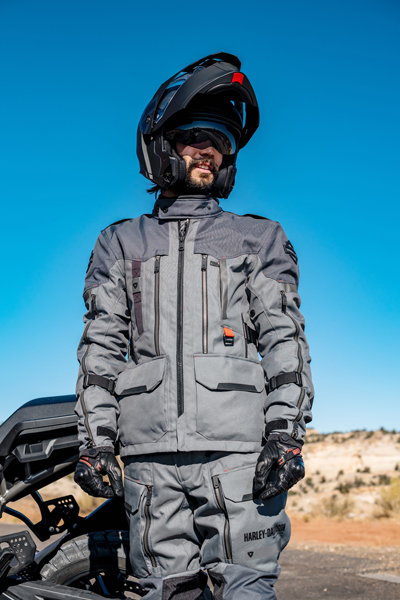 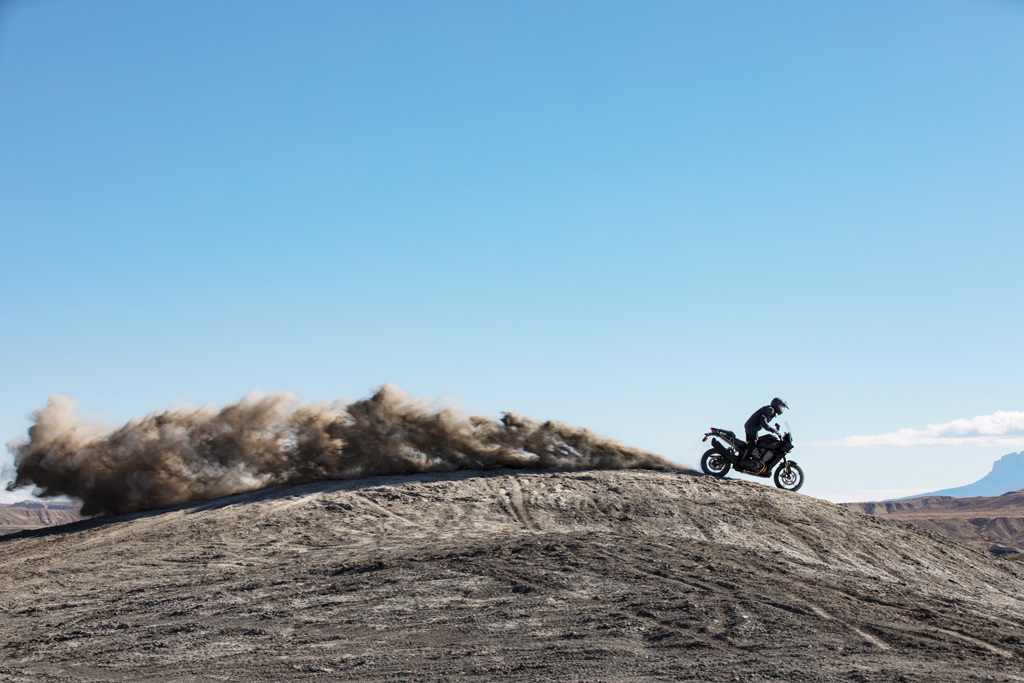 A bike to rival (on paper) the best of Euro

Harley-Davidson first announced its Pan America adventure bike project almost three years ago, mid-summer in 2018. We originally expected to see the bikes on the market in late 2020, but the coronavirus pandemic and a major internal shake-up delayed the adventure bike reveal until February 2021.

After that much waiting, naysayers were poised to pan the Pan America. But, now that we know most of the bike’s specs, there’s not as much scoffing. Against stereotype, Harley-Davidson has built a machine with power, weight and price more-or-less on par with its rivals. And, the new bike is far more advanced than any other V-twin in Harley-Davidson’s current lineup. From what the company’s said about it, this engine is the new future of Harley-Davidson.

Both bikes have the same 1250 cc Revolution Max engine, making a claimed 150 horsepower and 90 pound-feet of torque. The standard model weighs 242 kilos at the curb, and the Special weighs 254 kilos. They run a 19-inch front wheel and 17-inch rear, with cast rims. Both bikes have 21-litre fuel capacity, and come with electronic safety features like leaning ABS, traction control, pre-programmed riding modes, and more. Cruise control is also standard. MSRP for the plain-Jane 1250 starts at $20,999. The Special model sees its MSRP start at $24,199.

No journos have ridden the new bikes yet. However, based on the spec sheets, you can see the Harley-Davidson is more-or-less in line with other street-biased adventure bikes like the BMW R1250 GS, the Ducati Multistrada V4, and the Triumph Tiger XRx. Some weigh a little more, some weigh a little less. Same for pricing, horsepower, and all the other features and specs. Harley-Davidson basically sits among its peers—on paper, at least.

However, there’s a huge difference between this machine and the rest of the Harley-Davidson lineup. This bike is more powerful, more modern, than anything else Harley-Davidson sells today, and yet it’s priced below many of the company’s flagship models.

THE REVOLUTION MAX 1250 ENGINE
The biggest difference is in the new engine. The Revolution Max 1250 is a liquid-cooled 60-degree DOHC V-twin, with variable valve timing (VVT) on intake and exhaust camshafts. Six-speed gearbox and a slipper clutch are standard.

The VVT system is an important key to the engine’s performance. Harley-Davidson’s technical explanation says VVT advances or retards the timing on exhaust and intake camshafts independently, through a potential 40-degree range of crankshaft rotation. Computer control makes sure the valve timing is optimized for the engine’s needs at that moment, whether it’s under acceleration load, or in high-speed highway cruising.

This overcomes one of the classic conundrums of engine tuning: Do you tune the engine for low-end torque, or high-end horsepower? Variable valve timing allows you to have a healthy dose of both. It also improves engine efficiency, which is incredibly important, considering ever-tightening emissions laws in Europe, Asia, and even North America in coming years.

Fuel mileage can also improve with a VVT system, but if you’re dropping more than $20k on a new motorcycle, chances are you aren’t as worried about that.

The VVT system is the engine’s most interesting feature, but Harley-Davidson put clever engineering into all the other components (Harley says this engine was developed inhouse, unlike some previous liquid-cooled MoCo V-twins). Many major components are made of aluminum or magnesium, to allow for lighter weight, more efficient cooling, and generally tighter clearances. Even little details, like spark plugs, are engineered to improve efficiency or boost horsepower, or both.

The new engine redlines at 9,500 rpm; compression ratio is 13:1 (meaning it requires high-octane fuel for max performance, but an anti-knock system lets the bike run on regular gas, if that’s all you can get).

This is all very different from Harley-Davidson’s previous “no replacement for displacement” engineering principle. But for the cruiseratti, who might be worried about the mind-over-muscle move, Harley-Davidson throws out this appeasement: “Desirable engine sounds—a stirring exhaust tone—can predominate because noise from internal engine sources is reduced by liquid cooling.” It’s telling the faithful, “Don’t worry, this will still sound like a Harley.” And, by a happy coincidence, the reduced mechanical noise will also help it pass Euro emissions standards.

Finally, the engine also serves as a stressed member of the chassis, which gets to another round of smart design.

ADVANCED CHASSIS DESIGN
Instead of an old-school steel-tube frame, Harley-Davidson basically built the chassis around the V-twin engine. All the frame’s sub-components bolt directly to the engine, similar to a modern superbike (the Ducati Panigale V4 uses this arrangement). This allowed the designers to cut weight considerably, and shows this is not just a fuddy-duddy’s bike. The engineering team put serious work in here.

Both bikes get radially-mounted four-piston brake calipers up front, with 320 mm discs, and a single-piston caliper in rear with floating disc. Nothing too sci-fi here, but certainly in the ballpark of the competition. Same goes for the suspension on the standard 1250: A 47 mm USD fork with adjustable spring preload and compression and rebound damping. In back Harley-Davidson used a linkage-equipped monoshock with adjustable compression and rebound damping, and hydraulic spring preload adjustability.

The Pan America Special is much more advanced, with semi-active front and rear suspension. Changing the bike’s ride mode changes the suspension’s performance—Comfort gives you a softer ride, Sport stiffens the suspension for more control, and so on. Then, while you’re riding, the Showa BFF forks and BFRC shock have electronic management to optimize suspension compliance under changing road conditions.

The Special also comes with a Vehicle Loading Control feature. This senses how much weight is onboard the bike in passengers and luggage in order to set optimum sag by automatically adjusting the preload.

This sort of tech has been available on Japanese and Euro bikes for a while now, but it’s still pretty high-end stuff. Now, Harley-Davidson has the same advanced suspension as other big-dollar tourers and adventure tourers, and if you pay more, you can get a feature no other manufacturer has: Adaptive Ride Height.

Basically, Adaptive Ride Height changes the seat height when the bike stops, dropping the saddle from 890 mm to 855 mm. For lanky riders, this might not sound like a big deal. For short-legged riders who want to ride a tall adventure bike, it’s potentially a game-changer. This could open up the ADV market to many customers who would have been otherwise intimidated by sky-high seat heights.

Harley-Davidson gave the bikes a six-axis Inertial Measurement Unit. This sensor allowed Harley-Davidson to include cornering-sensitive ABS, traction control and engine braking control systems. There’s also a hill-start assist feature. Harley-Davidson has been working on systems like these for years, but at this point, we haven’t heard if this was an in-house design, or licenced from a third-party manufacturer, which is what most of the industry is doing these days.

Most of those safety features have adjustability built-in. The Pan America has preprogrammed Road, Sport, Rain, Off-Road and Off-Road Plus riding modes, as well as a user-customizable riding mode or modes. The riding modes feature different levels of electronic interference. For instance, Rain mode would have greater traction control management than Sport mode. Riders can change between modes with a switch on the right handlebar.

Again, this is all standard stuff for flagship machines these days, as well as the 6.8-inch TFT gauge, which can sync with a mobile device for infotainment purposes (control music streaming, see turn-by-turn GPS navigation, etc.).

THE SPECIAL’S SPECIALTIES
Along with the trick suspension mentioned earlier, the Special model also comes with several farkles installed as standard. There’s an aluminum skid plate, a set of radiator guards, adjustable rear brake pedal and a steering damper. Riders can also opt for a set of spoked wheels as factory-installed options. This will be important for any rider with serious off-road ambitions, as the stock cast wheels will probably be chewed up quickly at speed on truly rough terrain.

The wire wheels are set up for tubeless tires, as a proper modern adventure bike should be.

ACCESSORIES AND GEAR
Harley-Davidson makes a lot of money off accessories, and many of the upgrades included as are standard on the Special available for the standard machine at extra cost. Of course, there will be the other usual bits available: auxiliary lights, hard luggage, soft luggage, bar risers, and so on.

Harley-Davidson also signed a deal with Dutch riding gear manufacturer REV’IT! to produce a line of adventure-style riding gear including jackets, pants, boots, and more. The stereo typical lineup of leather vests and half-helmets was unlikely to attract riders headed to the Andes; REV’IT! has been making textile ADV riding suits for ages, so this is a sensible move. Harley-Davidson gets to sell quality riding gear right out of the gate.

THE BOTTOM LINE
Until this bike hits the market, it’s hard to say whether it will be a success for Harley-Davidson or not. However, on paper, it exceeds the naysayer’s expectations. Seat time, especially offroad, will ultimately be the decision-maker for most riders. However, at this point, you’ve got to give Harley-Davidson credit for such a bold move, and for laying out its future with a new engine that is going to soon migrate to cruisers and maybe other models. The MoCo’s future looks a lot brighter than it did a few months ago.