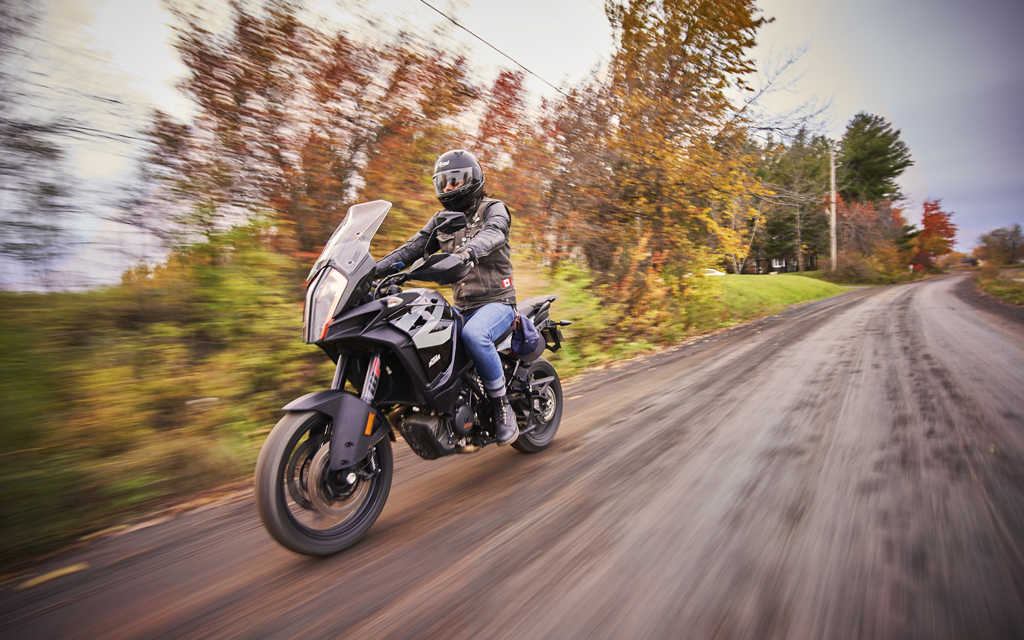 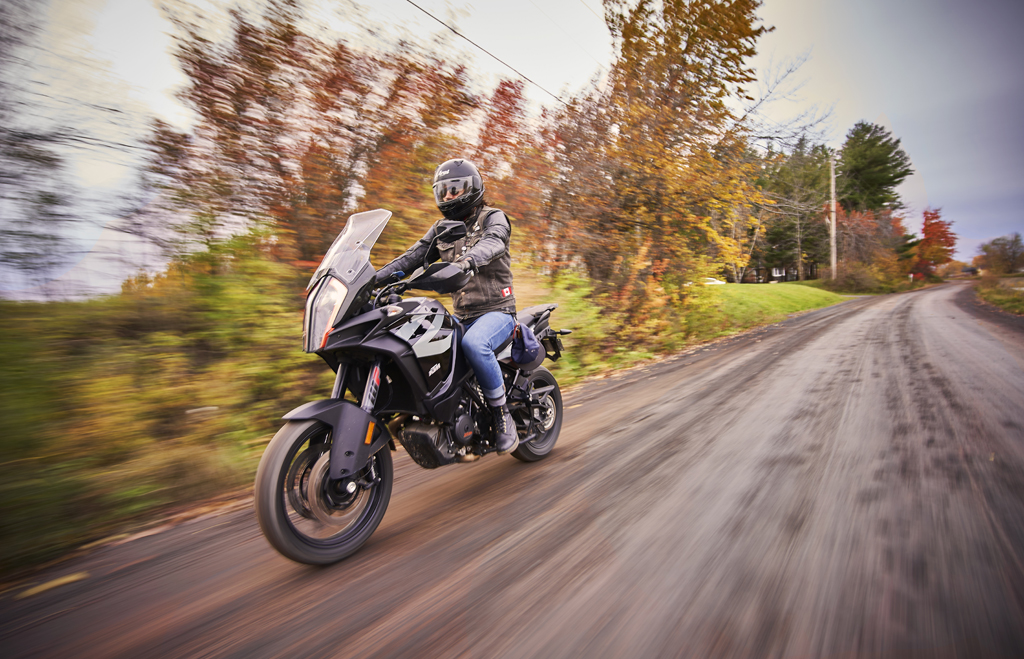 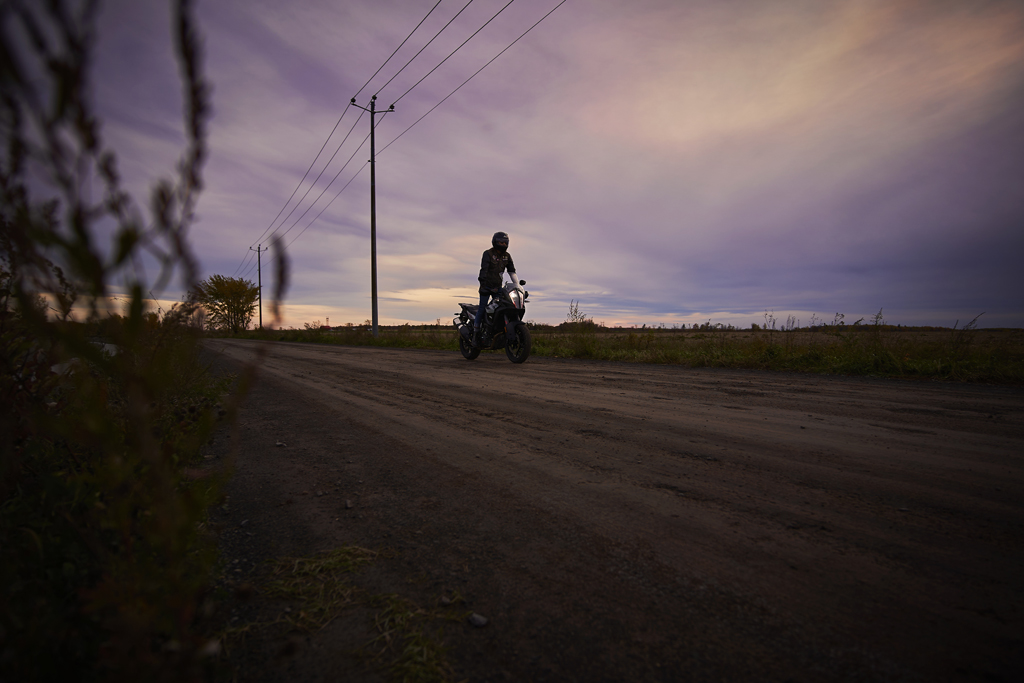 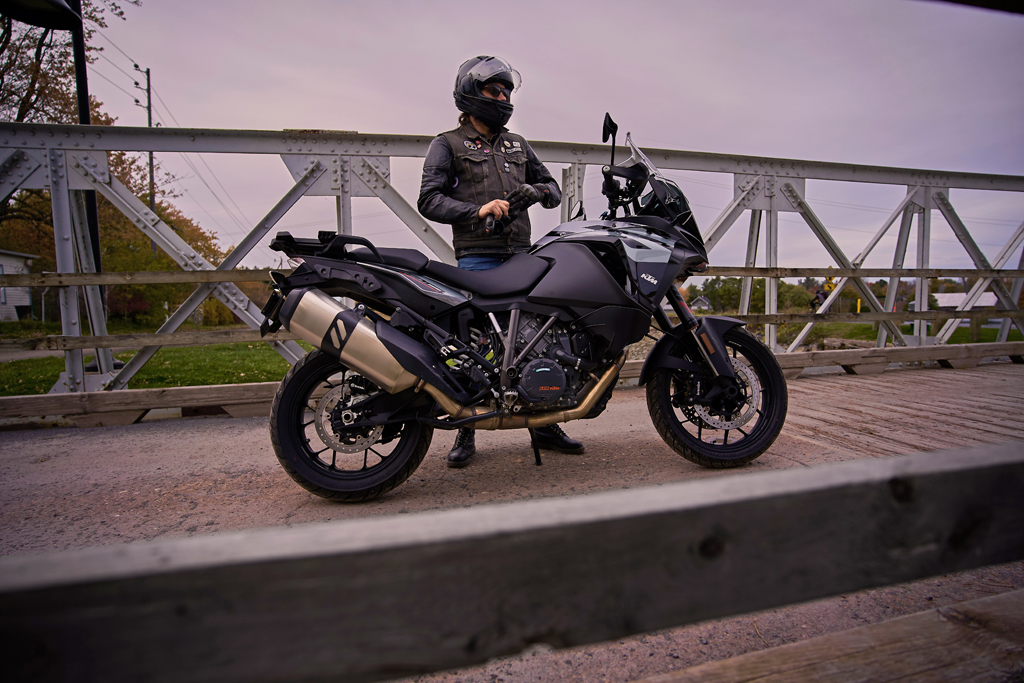 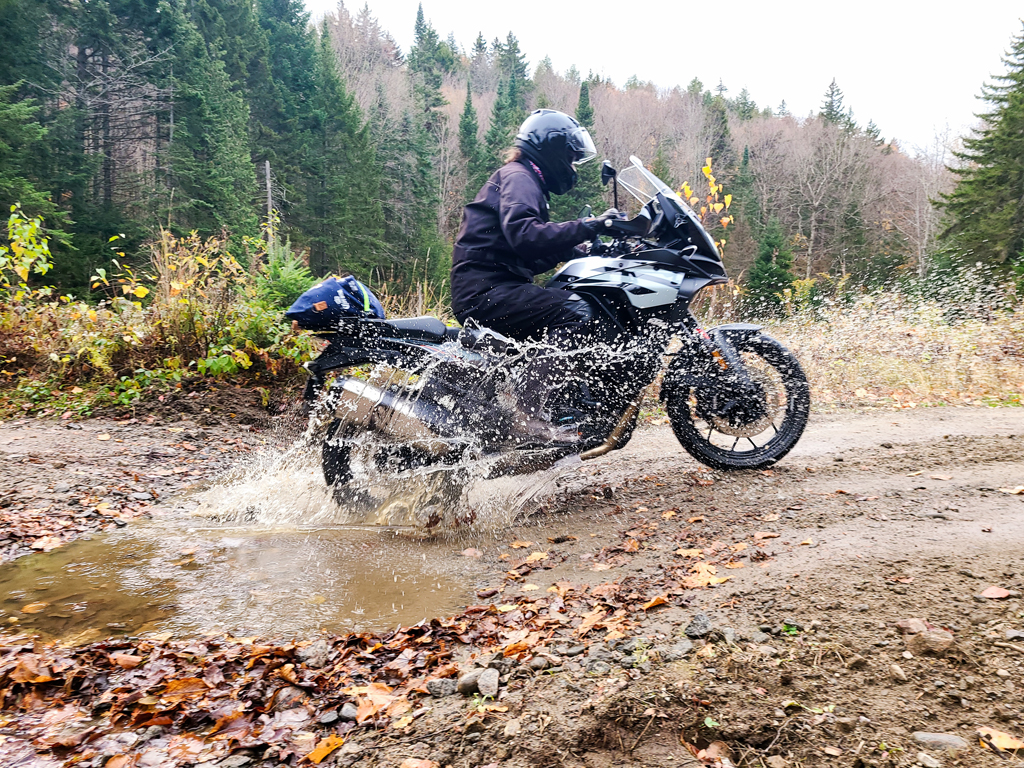 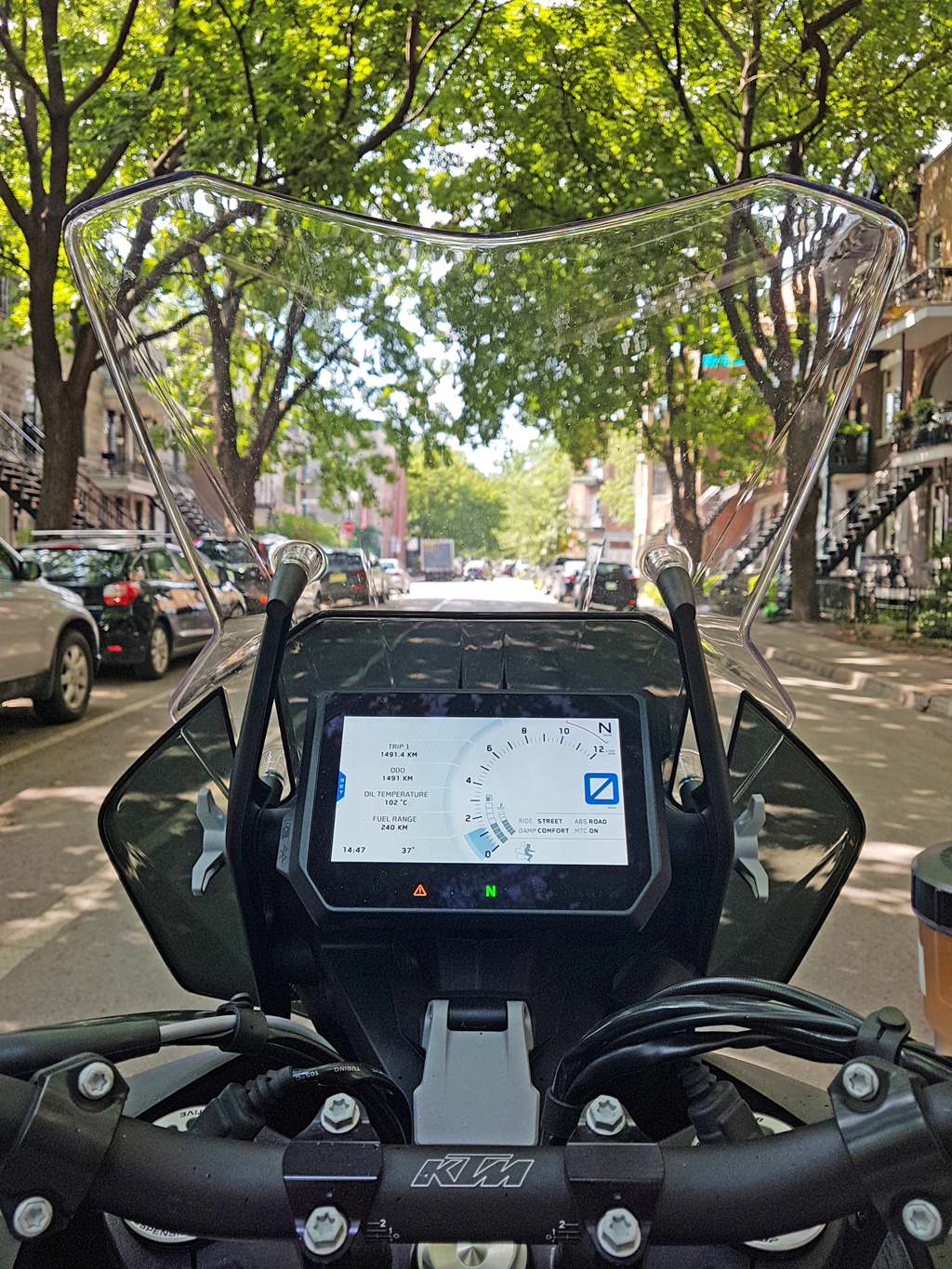 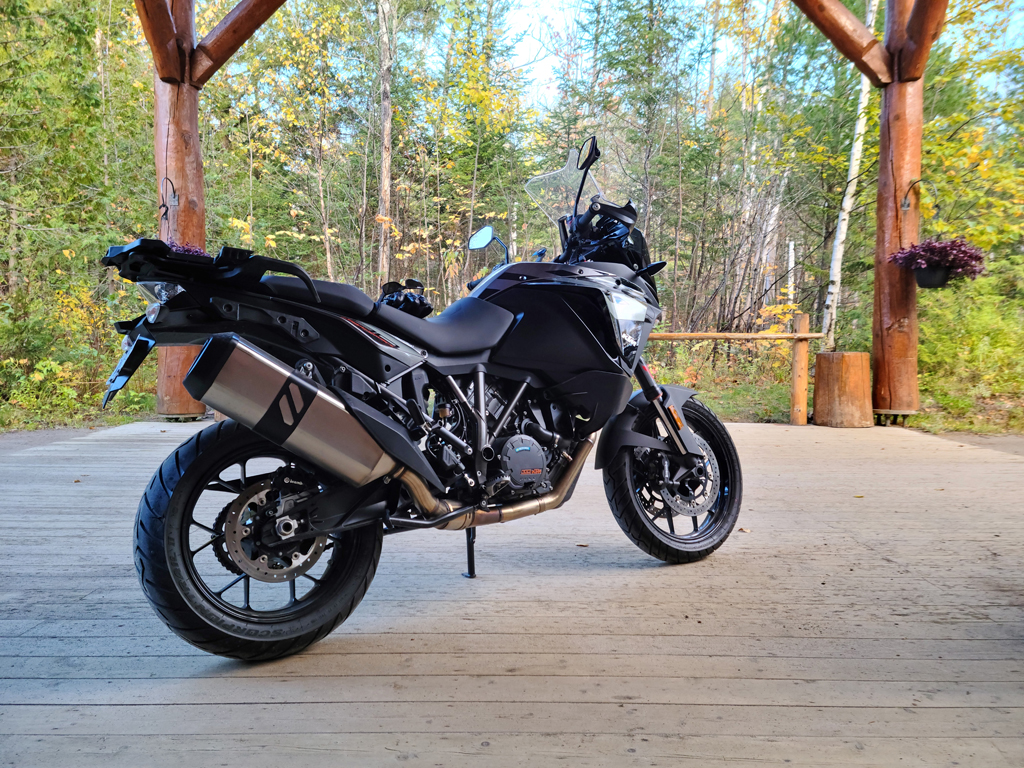 On the set of the Filles de moto 2 TV series, I had the chance to ride a KTM 1290 Super Adventure R for a few days in New Brunswick. Riding on seaside roads and on trails with more potholes than flat surfaces, I fell in love with this imposing, high-performance machine that’s at ease in all circumstances. Two years later, I got the opportunity to try its cousin, the Super Adventure S. That beast is more civilized but just as untamable.

I’ve always had a soft spot for KTMs and Husqvarnas. Maybe it’s because of Austria or Sweden, or because of the bold visual concepts of European designers, or because these two brands still have one wheel off the mainstream, or maybe simply because of the enthusiasm of the people who represent the two manufacturers here in Canada.

Spring 2020. We are in the midst of the first COVID-19 wave, and all plans of riding a bike outside our borders have been deleted. Summer is coming and we are afraid of restrictions that could affect our travels. But still, sales records will be broken in the summer of 2020.

My journey begins at KTM/Husqvarna Canada’s head office in Chambly, Québec. After a guided tour, we end up in the garage where I will discover the machine I’ll be riding for the upcoming weeks: a KTM 1290 Super Adventure S. Despite its commanding size and high- capacity side cases, it’s easy to hop on. Once seated, you realize it has a fairly thin waistline. Handlebars are wide and they can be adjusted many different ways. The big instrument screen is bright and easy to read even in full midday sun. The S rides on alloy wheels instead of the wire wheels usually fitted on adventure motorcycles. They don’t affect the general look, but one rapidly understands that this is more of a road machine than a bike that will take you to the end of the world.

On the service road alongside Highway 10, I twist the throttle in first gear. Then, holding on to the bars, I lift my left foot quickly to reach second gear. No clutch. The front wheel takes off im- mediately. Barely coming back to my senses, I hit third. Same scenario. The front wheel is in the air. I release the throttle right away, without even taking time to check the speed I reached.

I then stop by the side of the road. Too much adrenaline in too little time for a quiet Wednesday afternoon in June.

Using the easy-to-reach control buttons on the left bar, I explore the menus offered through the on-board computer until I find the driving modes: Sport, Street, Rain, Offroad. For a quieter and less daring driving experience, I pick Street. This machine is way too powerful for me. While stopped, I also check out the other menus: adjustable semi-active suspension that also takes into account weight distribution on the bike, multi-level traction control, lean angle-sensitive ABS. This machine is fast and sophisticated.

Last summer was peculiar because I had to ride between Montréal and Québec City for my job dozens of times. So, I tried to be creative in inventing alternate routes: North Shore (of the Saint Lawrence), South Shore, the country roads of Lanaudière, Mauricie, Centre-du-Québec and even Saguenay, up north. The KTM is a good companion even if the seat is a bit too firm. The riding position is comfortable and the cruise control is a feature I really appreciate. But for someone my height 1.8 m (five-eleven), it’s hard to find an appropriate windshield position. The item that should allow me to fly smoothly through the wind does the exact opposite. It can be adjusted over a little more than five cm up and down with an easy-to-reach knob, but that is not enough to direct the airstream over my helmet. End result: the wind is funnelled right on me.

As for its other models, the Austrian brand went for a rectilinear design for the front part of the Super Adventure S. This very distinctive bug-headed front end is fitted with a huge LED split headlight that moves sideways in curves following the lean angle of the bike. To test this technology and the brightness of the low and high beams, I stretch an evening into nighttime. On my way back home, I ride country roads around Saint-Hilaire, Rougemont and Yamaska Mounts until I get lost.

I am a long, long way from home. So I decide to download KTM’s My Ride application for a few dollars in the Play Store; a few clicks later, directions home appear on the Super Adventure’s screen (now in dark mode). The GPS app is well conceived, easy to use and precise. I insert my phone in the waterproof pocket beside the instrument panel, connect the charge cable to the dashboard 12 V outlet, open up my visor slightly to let fresh air in, and out I go. Now back into civilization, halfway over the Jacques-Cartier Bridge, I push the turn signal button to the right and take the exit for Île Sainte-Hélène to enjoy a fine ride around that island in the middle of the Saint Lawrence. All alone with the picturesque view of Montréal asleep. It’s before the curfew and the second wave restrictions. That great time of the year when nights are warm and you’d rather be riding than sleeping.

I really can’t take the Super Adventure back to KTM without giving it a try off-road. That would be like having lasagna in front of you and ignoring the cheese on top. Sure, we did shoot a few scenes on the 1290 where we would occasionally gather a little dirt on our boots, but nothing serious, really. So now, I want to test the big machine in gravel, muddy water, sand and un- forgiving trails. To do so, I head to Saint-Alexis-des-Monts in the Laurentians. Two bikes, two riders: one who knows all about off-road theory and practice and one, myself, who knows little of both. With no luggage and the cases off, the 1290 feels lighter and thinner as we leave the pavement early in the morning. Without any real planning to speak of, we pick a trail more or less at random: might be a cross-country ski or snowmobile trail, there’s no way of knowing since there’s no one to be seen all day, and signalization in the middle of the bush is, of course, deficient.

With all the riding aids available, you feel that the on-board computer is doing all the hard work for you. Taking a 160 hp V-twin off-road kind of reminds me of that expression about killing a fly with an elephant gun. I have to be very light on the throttle to avoid having the rear wheel spin like crazy. That said, the Super Adventure S performs really well in all circumstances, especially considering that, as a beginner in trail riding, it takes very little to catch me off guard.

The efficiency and fine response of this 1301 cc engine will leave no one indifferent. But the 1290 Super Adventure S is needlessly powerful for off-road riding and the adventure is in its name only. True, it is built on the same chassis as the 1290 Super Adventure R, a machine that shows its true potential out in the wild. But the S is meant to have fun on pavement much more than on bumpy grounds. Still you can sweat and enjoy zigzagging between rocks and roots, as long as there are no demanding hills to climb; the stock tires are absolutely not fit for off-road riding.

I would have liked to hear the V-twin blow its music through the components of an optional titanium Akrapovic can. I remember riding a Svartpilen in Portugal two years ago for a road test. The rumble of the Akrapovic muffler (with its laser-engraved logo and carbon fibre tip) completely changed the riding experience on the 701.

Because it’s nimble and very advanced technologically, the KTM 1290 Super Adventure S can adapt to any kind of conditions. On board, you feel safe and in control. And knowing that you have 160 horses, ready to run at your command, makes it difficult to tame the little voice inside that tells you to twist the throttle to the stop.