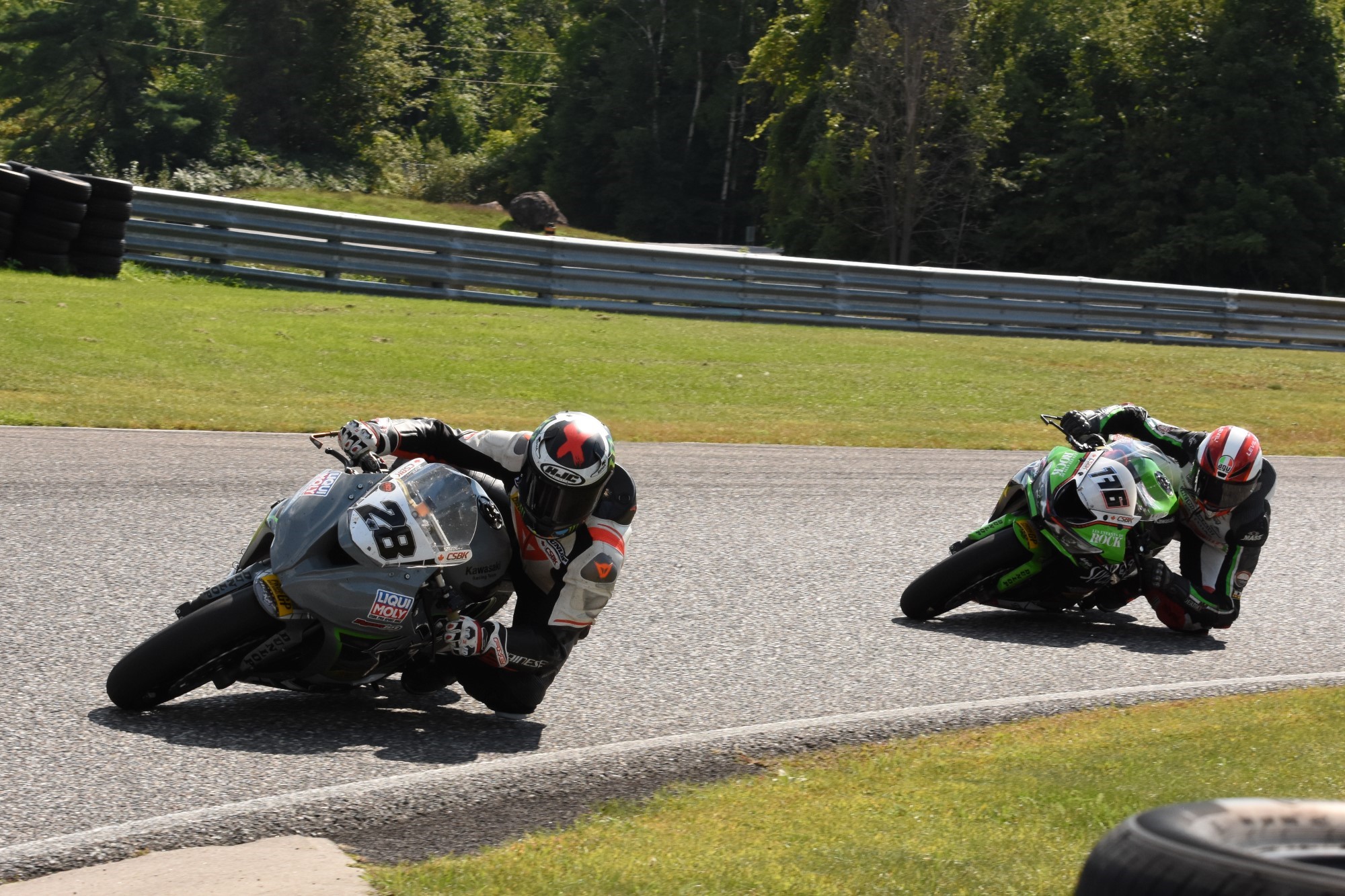 The second-fastest qualifier had a poor start, and then had to work his way through the pack to get on the tail of race leader Yamaha-mounted YZF-R1M Ernest Bernhard, from Ste-Brigide-d’Iberville, QC.

The popular Bernhard, known by his crew as “the fastest Farmer,” had a solid shot to earn his first Championship crown in the Feature division, and started his day with Pole and the four-point bonus that goes with the fastest Qualifier designation.  However, Bernhard then needed to win the race, and that would require beating Tremblay.

“I thought that I had it, but that’s the story of my life,” smiled 58-year-old Bernhard, who held first place for all but the last few corners of the eight lap Featured Regional final.  “I was good with the pace, but on the last lap I blew corner 14 and then I lost my rhythm completely.  It was close at the finish line.”

As Tremblay took the lead with just turns to go, Bernhard looked for a repass while first-race Pro riders Cedric Leclair from St Jerome, QC on a Kawasaki, and Marc Labossiere from Longueuil, QC on a BMW pulled into the leader’s slipstream.  The four bikes were right together at the finish, Tremblay in first by .064 of a second from a frustrated Bernhard, with Leclair getting his first Pro Podium placing in third, another .033 seconds behind.

These last lap surprises meant that 2021 Canadian National Superbike Champion Alex Dumas of Quebec City, QC, earned the number one plate Pro 6 GP Series previously held by Beaconsfield, QC, based BMW pilot Michael Leon.  Winner of race two in 2022, Leon was injured at the July Atlantic Motorsport Park National and out of action in the final event of Pro 6 GP.

Liqui Moly/FAST Riding School-backed Suzuki GSX-R1000 pilot Dumas, age 20, won three of the six series races in 2022, but was not in attendance at the last event.  In 2022, Dumas placed second overall in the CSBK National tour behind the BMW of arch-rival Ben Young from Collingwood, ON.

In the Pro Sport Bike round presented by Kawasaki, points leader Philippe Masse, from Montreal, QC, got out front early aboard his Kawasaki ZX-6R Ninja, chased hard by part time racer Vincent Levillain of Saint-Hyacinthe, QC, on another Ninja, backed by the Speed Factory.  Levillain stayed close throughout the eight-lap final, and on the last lap’s wide-open trip up the hill through turn seventeen pushed into the lead.

Levillain then held off the determined Masse for the final three corners, eaking out the narrowest of wins by just .03 of one second.  Masse had already cliched the 2022 Pro 6 GP Championship for the middleweight division.

In another entertaining dice, Ferme-Neuve, QC, based racer Bobby Desjardins pushed his Kawasaki to third, shaking off the best chase efforts of Honda CBR600RR mounted Louie Raffa of Sainte-Marthe-sure-le-Lac, QC.  Veteran Raffa was 1.6 seconds behind for fourth.

Recently un-retired former rising star Nicolas Meunier of Verdun, Qc., worked up to fifth on his Ninja 636, getting the best of a dice with Triumph 675 Daytona triple mounted Sean Latta of Lyndhurst, ON.

Motul Amateur Superbike quickly turned into a two-horse race between the Kawasaki ZX-10R Ninja of St-Jerome, QC, based racer Cedric Leclair and the BMW S1000RR of Marc Labossiere from Longueuil, QC.  Labossiere had already clinched the Amateur Superbike crown and held the lead from a focused Leclair.  Then Leclair made his move, surviving an off-track trip exiting the last turn on the final lap to edge Labossiere by .627 of a second.

Soon-to-be Pro Bobby Desjardins netted third overall in Amateur SBK against the big bikes on his Kawasaki ZX-6R Ninja, while the unique and exotic KTM RC8C twin of Kitchener, ON.’s Nathan Playford was a solid fourth.

Playford did even better in DP Brakes Amateur Sport Bike, taking his rare Kramer-based KTM Twin to victory after a crazy first lap when two of the Championship contenders dropped out – Alexandre Michel of Montreal, QC (Kaw) and Yamaha YZF-R6 mounted Nolan Eadie of Gloucester, ON.  Recovering from a Qualifying crash after he set pole position, Michel made it back to the pits, but Eadie’s bike was severely damaged.

Bobby Desjardins got up to second and set out after leader Playford and was 1.5 seconds back at the flag – Desjardins earned the series Championship by nine points over the absent Guillaume Lavallee, from Sainte-Anne-de-Sorel, QC.

The action was gripping at the front in Liqui Moly Pro-AM Lightweight, where Pro Ryan Vanderputten from Kingston, ON., got ahead early on his Yamaha YZF-R3 and then held off the Kawasaki Ninja 400 of Jacob Black of Etobicoke, ON, by 2.7 seconds for the win.  Black took the Amateur win, a strong result for the hard-luck Aussie.

Pro Istvan Hidvegi from Mississauga, ON, was third with his Yamaha, having already clinched the Senior division crown, while Benjamin Roy from Laterriere, QC, was fourth on the road with another Yamaha, and second placed Amateur finisher.  Roy took the Amateur title but just one series point from Evan Moriarity of Milton, ON.  Moriarity did not start the final 2022 counter.

Jean-Michael Halle of Levis, QC, was first overall in the combined Heavyweight and Middleweight Challenge with his Yamaha YZF-R1, Frederic Barnabe also of Levis a very second overall (.4 of a sec!) aboard a Yamaha YZF-R6.

Halle earned first in the Heavyweight Sportsman Senior category, taking that title, while Eric Gosselin of Beaupre, QC, netted third overall and second in class on a Kawasaki.
Barnabe was first in the Middleweight Sportsman Junior division, also taking his class title.

The Middleweight Sportsman Senior category already had a Champion in Alan Burns of South Mountain, ON, and the Kawasaki ZX-6R Ninja racer also won the class in the final race.  Series newcomer Shahin Taheri of Stittsville, ON, won Heavyweight Sportsman Junior aboard a Honda CBR1000RR, while Labossiere had already clinched that overall Championship.