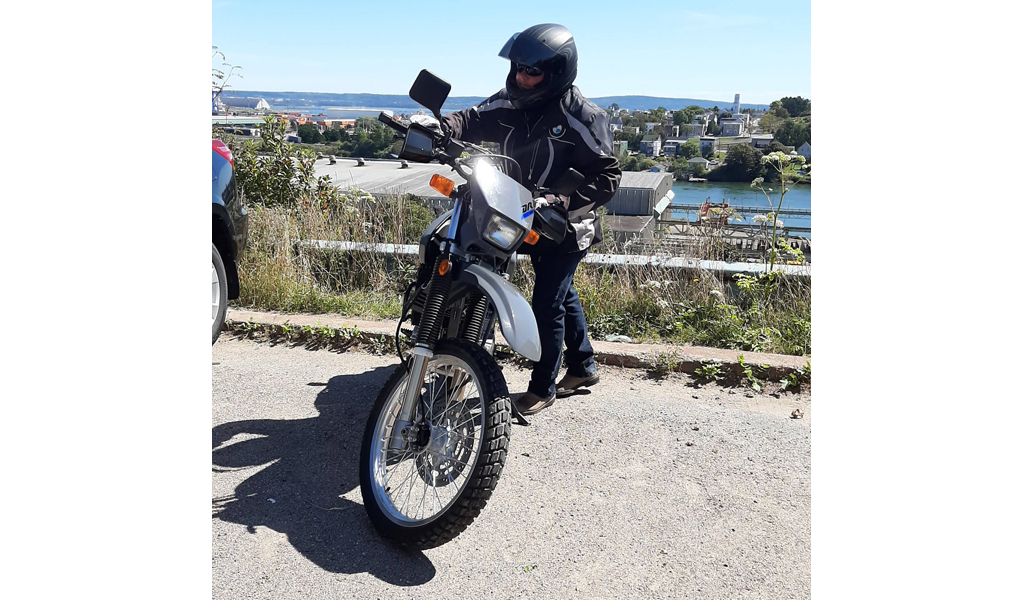 So I did it, I traded in my BMW 1150 RT. After owning it for 12 years I bought a new bike that is both future and past. I have been riding motorcycles for 45 years. Over time you can drift away from what you once loved and not notice it happening. It’s been a bad year for all of us for obvious reasons, but out of that sometimes you rediscover something you hadn’t been expecting.

The first bikes that I ever saw up close belonged to a few older guys down the street, Honda 50s and 90s and a loud and “fast” Yamaha 125. I remember their spokes shining in the sun, my friends and me looking on spellbound. Later, there was a neighbour who was an avid fly fisher who interestingly had a Yamaha DT360. One of those old ring-ding two-stroke dirt and trail bikes that he would fire up on Saturday mornings. Throwing on his backpack with his fishing rod poking up like an aerial he would head off to fishing spots, short-shifting the big dirt bike until he disappeared down the street. That was freedom.

I bought my first real bike at 18 and I was smitten with motorcycling. Five bikes later after a break to raise two kids I bought the BMW. But with the twists and turns of life, elderly parents, work, a mortgage, a serious heart operation and a host of other issues, I didn’t get out riding that BMW much over the last four years.

The Beemer was always fun enough and I’d done two-up trips to my favourite destinations in Maine; it was good for that, plenty of luggage space. I could even bring wine glasses, but riding it was always a bit scary, you had to stay on your game with it. It was a big, fast and luxurious bike, but a handful to ride. I had been thinking of something simpler, something that felt like those bikes I had back in the day that were so much fun to ride. I always seemed to be missing something and I kept looking to relive the trip I took a long time ago on a Labour Day weekend with my cousin. We were 22, we had good jobs with new 750s and pockets full of money rolling down Route 1 in Maine in the thick cool evening air on an adventure. I have always wanted that moment back.

I finally realized what I was missing was less, not more. I always had a couple of “next” bikes in mind, all of them smaller and more nimble and easier to manage, park and use on a daily basis. I was really interested in the adventure bike idea or a smaller road bike like the Yamaha R3 or the Kawasaki 400. But for some reason

I kept going back to the Suzuki DR 650. They’re old school, a tough dual sport with no tach, no fuel injection, and no worries. A smaller, lighter, and simpler bike that could go anywhere within reason, it could be the wave of the future. At least, maybe my future.

I took that plunge and guess what? I found what I was looking for. That feeling was back. The first time I rode it was like I had just got on a mountain bike with a huge engine. It was just what I needed to go where I wanted when I wanted. I ride it every chance I can. I’ve only had it a month and have 1,000 km on it. I’ve had it on a few dirt roads and pavement. I’ve gone to the grocery for that litre of milk, for coffee with friends. I packed up my own coffee (in spill-proof cup) to drink by the ocean. I don’t fish much anymore, but I might start again and go out early on a Saturday morning to a fishing hole; I could be home in time for breakfast. And I’ll think of that guy back then with the DT 360. I’ll think of the trips I took and adventures I had and the new ones yet to be had.

My cousin once said that “motorcycling is a faith.” He was right. If you are not having fun, maybe you need to find a bike that will get you back on the road to finding that faith again. So whatever you ride now, or want to ride, ask yourself: “Am I having fun?” Will you get off that bike when you get home and say to yourself, “This never gets old”? I do now… every time… again.