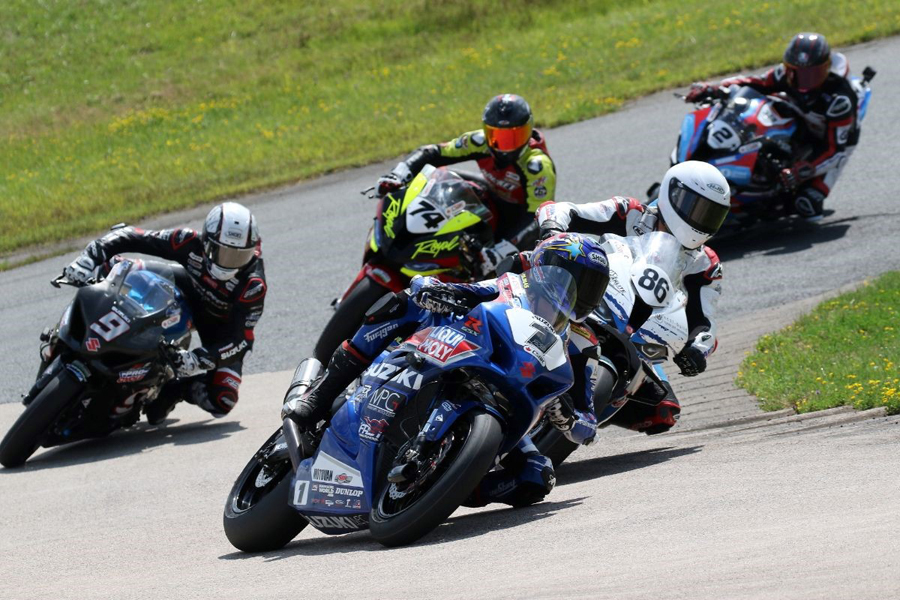 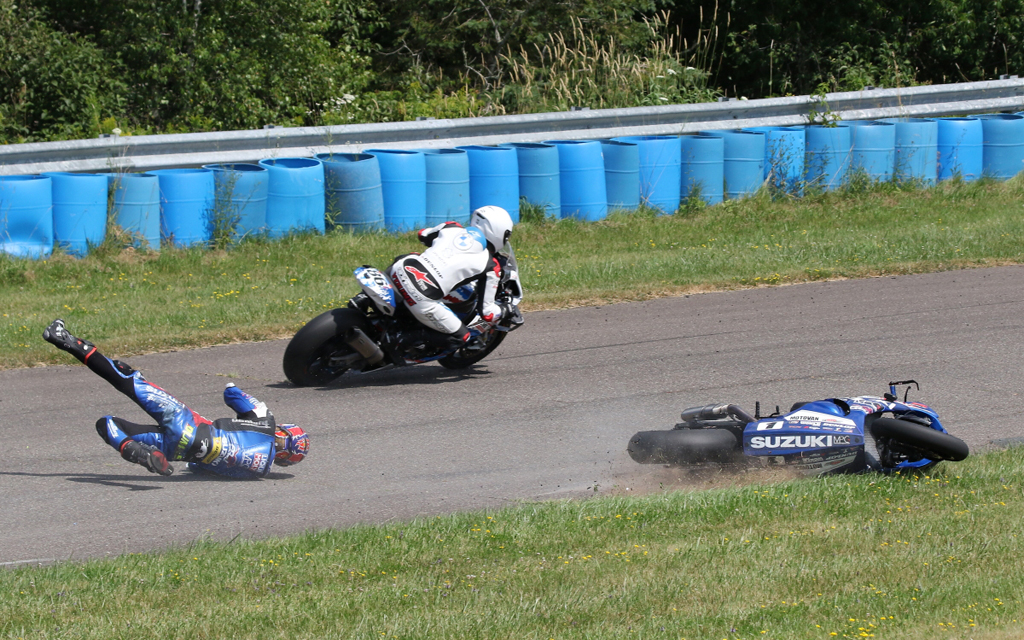 The Canadian Superbike Championship feature class was blown wide open on Saturday, as Ben Young scored his third victory of the season after rival Alex Dumas crashed out of the lead in round three action at Atlantic Motorsport Park, presented by Pro Cycle, Kawasaki, and Arai.

Young entered the day with a one-point championship lead over Dumas, but that advantage was put in jeopardy early on as Dumas grabbed the holeshot from the right side of the front row.

The two nearly collided in turn two, but it was the reigning champion who maintained his lead, with Young chasing him almost nose-to-tail for the next 10 laps in the 22-lap feature. The two then came together again in the exact same spot on lap eleven, with Dumas escaping unscathed and still out front – albeit not for long.

With all sorts of pressure from Young, the Liqui Moly/Fast School Suzuki rider got out of shape entering “The Rollercoaster” at turn five, crashing out of the lead and handing the top spot back to his championship rival. Dumas would try to get the bike running again, but it was not meant to be as he saw his title deficit balloon to 26 points.

As for Young, the Van Dolder’s Home Team BMW rider effectively cruised the rest of the way, going on to secure his eighth career national Superbike victory and take a commanding grasp of the championship as his main rival crashed out – an eerily similar result to his race one win at AMP in 2019 that helped him capture that year’s title.

“We each had our strong points on the track, and ironically for Alex one of his spots was turn five, but he got hard on the gas and went down,” Young said. “First of all I’m glad he’s okay, but this same thing could happen to us too, so you need to capatalize when you get an opportunity like this.”

The win also becomes crucial for BMW in the Constructors Championship, as the win – coupled with a third-place finish from Michael Leon – will see their title lead grow to 27 points, though Trevor Daley helped limit the damage for Suzuki in second.

The OneSpeed/Pro Cycle rider crashed in the morning practice session but made a brilliant recovery when the lights went out in race one, holding off sustained pressure from Leon before eventually settling into a comfortable run in third – which later became second when his Suzuki counterpart hit the asphalt.

“It was a bit of a salvage job for us after I gave the team a bit of extra work this morning, but the OneSpeed/Pro Cycle Suzuki worked great today,” Daley said. “It’s not an ideal way to finish second, but this is a result I wanted and I’m really happy with it.”

While Daley did his best for the reigning Constructors champions at Suzuki, the double-podium result will be a huge coup for both BMW and veteran Michael Leon himself, who earned his second career podium aboard his Royal Distributing machine – but his first in front of a crowd.

“It feels really good to be standing here, because my last podium was in 2020 when there was no fans and no celebration,” Leon said. “When I saw Alex go down, I just tried to cruise home and not make any mistakes, but those were the longest ten laps of my life.”

The rostrum will move Leon up to sixth in the championship order, though he will still have some work to do to close up to Sebastien Tremblay in fourth and Samuel Guerin in fifth, who enjoyed a thrilling battle themselves for fourth in the race.

Guerin wound up the beneficiary of that battle, putting a late pass on Tremblay aboard his EFC Group BMW to make three M1000RR’s in the top four, while the latter settled for fifth aboard his Turcotte Performance Kawasaki, leaving him with a four-point gap to Guerin in the championship heading into race two on Sunday.

Jake LeClair took a debut victory in the Liqui Moly Pro Sport Bike Class race, winning after another mistake from a race leader as Trevor Dion crashed in turn two despite a comfortable advantage.

Dion looked poised to extend his championship lead, but instead could only recover to third as LeClair cruised the rest of the way to a maiden win, while David MacKay settled for second and slightly trimmed his championship deficit in the process.

Local phenom John Fraser bolstered his AIM Insurance Amateur Superbike title bid in a big way on Saturday, scoring his first career national victory and taking over the championship lead in the process.

Fraser didn’t manage the best start aboard his Yamaha machine, but quickly made up for it as he wrestled the lead away by lap three, going unchallenged the rest of the contest to move himself clear of rival Julien Lafortune.

That was helped in large part by a crash from Lafortune, which will see a full 27-point swing in Fraser’s favour, while fellow local rider Tim Storer did him some favours by charging to a strong second place ahead of Mavrick Cyr, with the teenager scoring his first Amateur national podium.

Fraser added another victory on home soil in the Amateur Sport Bike class, overcoming a brief challenge from Alexandre Michel before cruising to a dominant win by nearly 20 seconds.

The rising star cuts his championship deficit to just 12 points in the process despite the best efforts of championship leader Paul Etienne Courtois to limit the damage in second, with Michel eventually fading back to third and the final podium spot.

Another local name found the top step of the podium in the Super Sonic Race School Lightweight class, as Vincent Wilson took his first career national victory to move to third in the championship battle.

Wilson won a dramatic contest after a thrilling battle with fellow local star Avery Hart, a duel that came to an unfortunate conclusion as Hart crashed out on the final lap. That in turn promoted Bryce DeBoer to second, who was the biggest winner of the day as he closes to within just eight points of championship leader Evan Moriarity.

East coast racing legend Gary McKinnon scored his first victory in the Lightweight Pro/Am, conquering the Pro division and the overall grid ahead of a thrilling battle for second behind him.

That battle was won by championship leader Jared Walker, but by just inches after a late charge from local expert Richard Thompson, who made a great recovery from pit lane after missing the start.

Hart salvaged his day with a win in the Amateur division of the Pro/Am, beating DeBoer and Grant Nesbitt in their split class results, as DeBoer now opens up a five-point advantage in those ranks.

The full results from Saturday’s action can be found on the series’ official website.