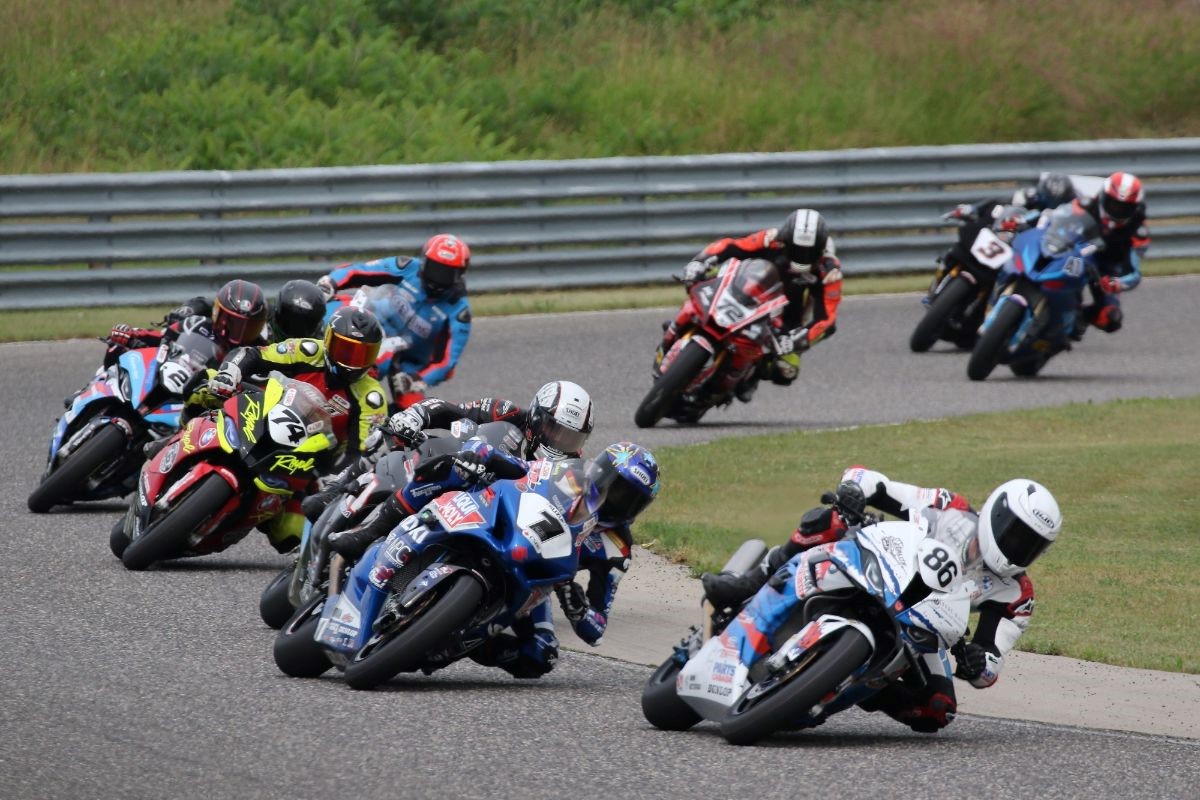 The gap atop the Canadian Superbike Championship all but evaporated on Sunday, as Alex Dumas continued his perfect run at Calabogie Motorsports Park to pull within a single point of rival Ben Young in the feature Pro Superbike class.

Dumas entered with a five-race unbeaten streak on the line around Calabogie, though he was immediately met with his biggest challenge yet as Young grabbed the holeshot for the second day in a row. Unlike Saturday, though, Young maintained that lead for the first half of the race, denying a handful of pass attempts as he threatened to end Dumas’ perfect run around his home track.

The defending champion had other plans on lap seven, however, finally getting a move to stick in turn five and eventually peeling away, as the Liqui Moly/Fast School Suzuki rider will head to round three within a single point of the title lead.

“I tried the pass a few times, but Ben just kept slamming the door. It was really fun battling out there, but I’m happy to pick up another win for the championship,” Dumas said. “I’ve never been to Shubenacadie, so I’m looking forward to battling again at round three there in two weeks.”

Despite another runner-up finish to his championship rival, Young will likely be pleased with his weekend overall, as he maintains his championship lead exiting the first four races – albeit in the finest of margins.

“I had another great launch like yesterday – the new ‘M’ BMW gets off the line really well – but Alex was a demon off the line as well which allowed him to stay with me,” said the Van Dolder’s Home Team BMW rider. “I knew it would be tough to win here, but we’re really looking forward to round three where we can hopefully build the gap back up in the championship.”

Joining the duo on the podium was Trevor Daley, who made up for a massive Saturday crash to run a comfortable race in third. The OneSpeed Suzuki rider remained slightly off the pace of the front two but continued to close the gap, while also climbing back into third in the overall championship.

“It was a bit of a lonely ride out there, but I was hoping I could just stay with them and pick up the pieces if they beat each other up a bit,” Daley said. “I still think we’re a lot closer than the gap will show, and it’s another good step forward so now we just turn our focus to round three in AMP.”

The double-podium for Suzuki will help trim their deficit to BMW to just six points in the Constructors Championship, but the German manufacturer will retain their lead thanks to a strong fifth-place charge from Samuel Guerin aboard his EFC Group machine.

Guerin was unable to get the better of Sebastien Tremblay, however, as the Turcotte Performance Kawasaki rider held on to fourth in the race and jumps to fourth in the overall standings in the process, while helping Kawasaki to third in the Constructors table.

David MacKay reversed his championship fortunes after a difficult race one, winning on Sunday after a dramatic three-way battle with rivals Trevor Dion and Elliot Vieira.

All three riders swapped places multiple times throughout, with Dion leading across the line onto the final lap before MacKay launched a thrilling overtake in the final corners to seal his second victory of the season.

“These doubleheaders are working well for me,” MacKay joked, referencing his race two win in Grand Bend after a race one crash. “Yesterday wasn’t the best day for us, but we were able to learn so much which helped us today, and this one is huge for the championship.”

Dion will ultimately see a win slip through his hands on the final lap for a second day in a row, but the LDS Consultants Kawasaki rider still held on for another runner-up finish and thus will retain a 13-point advantage over Vieira with MacKay a further two points back.

The trio will entrench themselves as the three championship contenders at the halfway point of the season, though MacKay will have experience on his side when the Fast Company Kawasaki rider returns to Shubenacadie in two weeks.

Julien Lafortune extended a sizeable advantage atop the AIM Insurance Amateur Superbike standings, winning for a second time after leading every lap on Sunday.

The Kawasaki rider will open up a 23-point lead over John Fraser, who finished second for Yamaha, a gap Lafortune will need as they head to Fraser’s stomping ground in round three on the east coast.

Paul Etienne Courtois will take over the championship lead in the Amateur Sport Bike class, as the first-year Amateur runner won his first national Sport Bike race after a close battle with hometown rider Guillaume Lavallee.

Courtois will carry a five-point lead over round one winner Sebastian Hothaza, who could only manage ninth in his second national appearance.

National debutant Andrew Cooney capped off a stellar weekend with a pair of victories in the Super Sonic Race School Lightweight class, winning both contests in dramatic fashion in just his third ever race weekend at any level.

Despite the double-victory, it was a successful weekend for championship leader Evan Moriarity, who exits with a 30-point lead atop the standings over Cooney in second.

Jared Walker continued his perfect run in the Pro division of the Pro/Am class, winning for a fourth consecutive time to extend his title grasp. Cooney would wind up the winner on both occasions in the Amateur ranks, with Bryce DeBoer grabbing a pair of second-place finishes to enter a tie for the championship lead.

The full results from Sunday’s racing can be found on the series’ official website at www.csbk.ca.