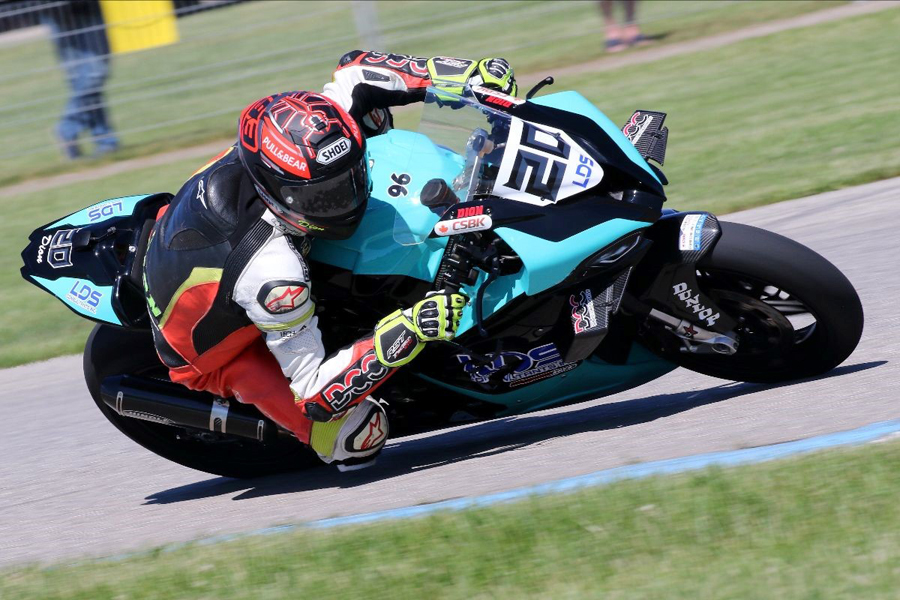 The 2022 Canadian Superbike Championship will kick off with a surprising name at the front, as rookie star Trevor Dion smashed his way to pole position for the Pro Superbike feature doubleheader at Grand Bend Motorplex this weekend.

Dion already gained plenty of attention on Thursday by topping the official test day at his home circuit, but the LDS Consulting BMW rider created even more buzz early in Friday’s qualifying session as he continued to lead the timesheets.

His time of 1:03.040 appeared to put him right in contention for a historic pole position, but a rear brake issue left him vulnerable as the session flipped to the top-ten Superpole. After fixing the issue just prior to the final shootout, the Strathroy, ON native quickly erased any concerns as he obliterated the lap record with a time of 1:02.371 in the final top-ten Superpole session to capture the BS Battery Pole Position Award.

His dominant performance lands him in exclusive company in CSBK history, as Dion will head into the weekend as the only rider ever to secure pole position in his Superbike debut and only the third-youngest pole-sitter ever at 20 years old.

“It’s a dream come true, even just to be up here battling against these guys and racing with them, it’s a really awesome feeling,” Dion said. “Now with the doubleheader we have two chances to pick up some big points this weekend, but also a couple more opportunities to gain some confidence here on the Superbike.”

Lining up alongside Dion in a BMW one-two will be weekend favourite Ben Young, who consistently found more pace throughout the 40-minute period but was never able to mount a proper challenge for his younger counterpart at the front.

The Van Dolder’s Home Team rider ultimately managed a time of 1:03.021, a lap that would have stood as the new outright record if not for Dion, but Young will instead be left searching for 0.650 seconds to close the gap entering the weekend.

“These local guys are keeping me honest here! They were really hustlin’ at the end, and the pace was super strong” Young said. “The BMW is working really well though, so hopefully we can have a good race tomorrow and put on a show for these fans.”

Joining the two BMW’s on the front row will be another local star in Steven Nickerson, who earned his first career front-row start aboard his Dewildt Powersports Honda with a time of 1:03.116, only 0.095 seconds off Young in second.

Nickerson has plenty of experience around Grand Bend as the reigning SOAR regional champion and should continue to have the pace all weekend, despite still recovering from a brutal knee injury suffered late in the 2021 campaign.

“We didn’t really know what the plan was up until a couple weeks ago, but everything obviously came together really well and I’m happy to be up here,” he said. “I didn’t know how many laps I could handle so we tried to pace ourselves a bit, but the Dewildt Honda felt great today and I was able to put in a few really good laps.”

The second row will feature a pair of Suzuki stars in defending champion Alex Dumas and Trevor Daley, with the pair winding up fourth and fifth on the grid despite a strong front row challenge.

Dumas got up to speed quickly in his first appearance at Grand Bend, but the Liqui Moly/Fast School Suzuki rider ultimately paid for his inexperience as he wound up 0.390 seconds adrift of the front row.

Daley, meanwhile, briefly placed his OneSpeed Suzuki machine at the front before his pace faded in the Superpole session, only marginally improving his time as he remains a comfortable 0.924 seconds off Young in second.

The local stars continued to be the theme of the day in the support classes as well, as David MacKay snatched his first career pole position in the Liqui Moly Pro Sport Bike category with a time of 1:03.654.

The Mack Attack Racing Kawasaki rider set a new lap record of his own in the process, crushing Dion in second who was doing double-duty in the Pro ranks aboard an LDS Consulting Kawasaki, while former champion Will Hornblower settled for third aboard his Yamaha Financial Services machine.

Leading off the Super Sonic Race School Lightweight grid will be another local challenger in the form of Evan Moriarty, who stormed to pole position with a time of 1:13.316 aboard his Yamaha YZF-R3 machine.

The Milton, ON native will be joined by perennial frontrunner Jacob Black and local teenager Bryce DeBoer on the front row this weekend, both Kawasaki-mounted as they look to overcome the early pace of Moriarty.

The inaugural pole position in the new Pro-Am Lightweight division went to Moriarty as well, who bettered his time with an outright fastest lap of 1:13.043. Moriarty will lead the Amateur ranks ahead of Black and DeBoer, while legendary East Coast veteran Gary McKinnon will grab pole in the Pro division after a penalty was issued to eventual second-place qualifier Jared Walker.

The only two classes not to qualify on Friday – the AIM Insurance Amateur Superbike category and the Amateur Sport Bike division – will instead prepare for qualifying on Saturday afternoon, as they are set to contest just one race each on Sunday.

The full list of results, as well as the weekend schedule, can be found on the series’ official website.