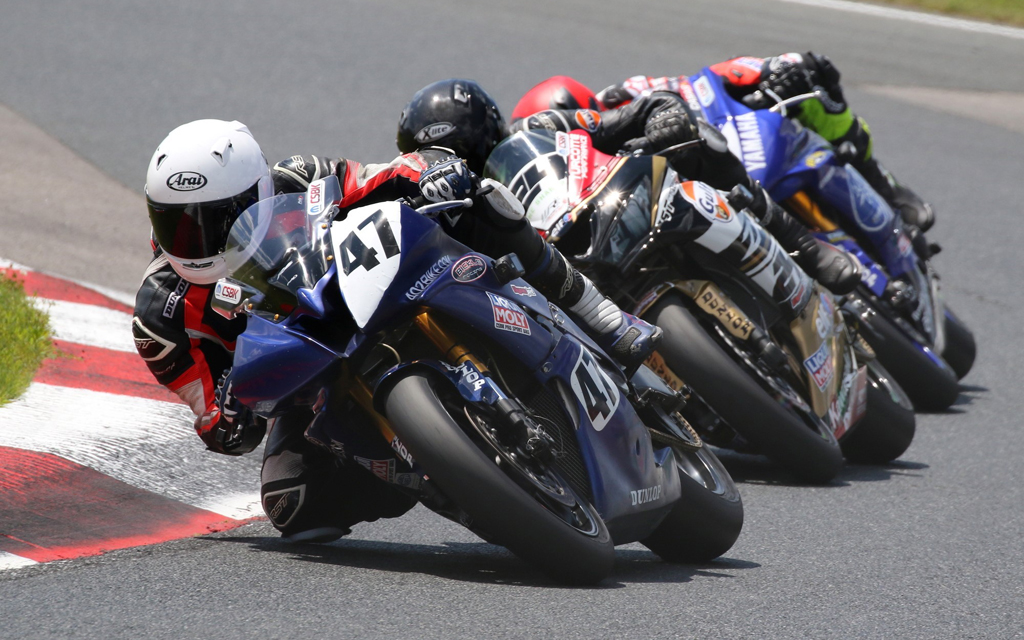 While several familiar names are expected to headline the feature Pro Superbike category in 2022, the support classes in the Canadian Superbike Championship are instead gearing up for the first round of what is expected to be a wide-open campaign this weekend at the Grand Bend Motorplex, June 9-12.

The most intriguing battle of the group will be in the Liqui Moly Pro Sport Bike category, which will have no returning champion for the first time since 2017 as Sebastian Tremblay chooses to focus solely on his Superbike program. The perennial frontrunner captured his first Pro title in dominant fashion last season, winning every race from pole position, but will now relinquish his crown heading into Grand Bend.

The grid won’t be without a former champion entirely, however, as the season is expected to bring the return of 2019 title winner Will Hornblower. A regular frontrunner in his own right, Hornblower managed two victories and a podium in all seven races to capture a dream championship two seasons ago, but his return has been put on hold for a number of factors.

The privateer Yamaha rider suffered rib and shoulder injuries in a brutal preseason crash while prepping for the 2020 campaign, with his recovery keeping him on the sidelines throughout 2021. Now mostly healthy, Hornblower will return as the presumptive favourite for a second career title, but recent regional racing has proved that won’t come easy.

Leading the charge in the SOAR series, notably hosted at Grand Bend, is former lightweight star Trevor Dion, who has adjusted quickly to the bigger bikes and put that expertise on full display by finishing second in his only appearance at CTMP last season. The LDS Consultants Kawasaki rider will have another local challenger to deal with, and another aboard Kawasaki machinery, as 2021 national runner-up David Mackay has also looked strong aboard his Mack Attack Racing machine.

The Quebec contingent will also have plenty to say in 2022, as the Pro 6 GP regional series welcomed the frontrunning trio of Phillippe Masse, Vincent Levillian, and Louie Raffa back to Calabogie Motorsports Park last weekend.

Masse – the third overall finisher from last season – was the eventual winner in that race, but the Turcotte Performance Kawasaki rider had to deal heavily with the SpeedFactory67 Kawasaki of Levillian, who finished just one spot behind Masse in the 2021 standings and one spot clear of Raffa, who wound up fifth overall aboard his Raffa Racing Honda.

The category will also feature a pair of young Yamaha wildcards that could play heavily into the championship equation, as former Guyanese champion Elliott Vieira and teenage star Jake Leclair are both expected to return full-time in 2022.

Vieira pushed Tremblay perhaps more than anyone else last season but continues to be plagued by mechanical issues within his Snow City Racing program, while Leclair flashed strong pace to begin the 2021 campaign and again showed that pace last weekend by battling with Masse and Levillian for the win in Calabogie aboard his Yamaha Canada machine.

Outside of the Pro ranks, the series is expected to feature just as much unpredictability and excitement in the Amateur Superbike, Sport Bike, and Lightweight classes, which are all likely to see unknown challengers emerge over the course of the season.

Leading the return in the AIM Insurance Amateur Superbike category will be an East-coast sensation and a pair of Quebecois talents, as John Fraser leads the way for Yamaha ahead of last year’s fifth-overall finisher Marc Labossiere (BMW) and sixth-place rider Guillaume Lavallee (Yamaha), the latter of which earned a pair of podiums but did not enter round two at CTMP.

Another pair of frontrunners expected to return are Suzuki-mounted William Degrasse and Aprilia-backed Erick Gosselin, both of whom entered the final round with a chance at a top-three finishing spot before Degrasse crashed out and Gosselin did not enter.

As for the Amateur Sport Bike category, a pair of young talents are expected to front the title battle in 2022, as Fraser does double-duty for Yamaha against former Lightweight star Mackenzie Weil, who is moving up to the Amateur ranks.

Fraser turned plenty of heads in his one-off appearance at CTMP last season, challenging eventual champion Brad Macrea en route to a second-place finish, and is expected to return for the full campaign this year – including a long-awaited return to his home race in Shubenacadie this July.

Weil, meanwhile, conquered the first four races of the Lightweight championship last season before a crash in Calabogie dashed his title hopes, though his focus has now shifted to a larger Yamaha machine as he aims to become the latest teenage star to graduate to the Pro ranks for 2023.

Fraser and Weil won’t be alone at the top, however, as they will have to worry about a pair of returning frontrunners in the form of Honda’s Nathan Playford and Yamaha’s Nolan Eadie, both of whom enjoyed exceptional 2021 campaigns and could have turned Pro if not for a DNF in the final round by both riders.

With Weil departing the Super Sonic Race School Lightweight category, the junior class will be open for plenty of intrigue in 2022, with reigning champion Harvey Renaud’s title defence uncertain for Kawasaki.

Perennial frontrunner Jacob Black is expected to return, also Kawasaki-mounted, but will likely have to deal with Honda challenger Paul Etienne Courtois, who finished third overall in last years championship but only 26 points off the front.

Another presumptive favourite will be the returning Istvan Hidvegi, who dominated the Pro 6 GP aboard his Yamaha machine and impressed in his only appearance at CTMP last season.

The 2022 campaign will also bring the introduction of the Pro/Am Lightweight class, a more “relaxed” version of the Lightweight category which will likely feature a group of former Pro riders sporting their new smaller machines, including the talented brother pairing of Cameron and Jared Walker.

The full schedule of events and additional information for round one at the Grand Bend Motorplex can be found on the series’ official website at www.csbk.ca.

Main picture: Former champion Will Hornblower (#47 Yamaha) will be one of many title contenders in a wide-open Pro Sport Bike class entering the 2022 CSBK opener in Grand Bend. Photo credit: Rob O’Brien.