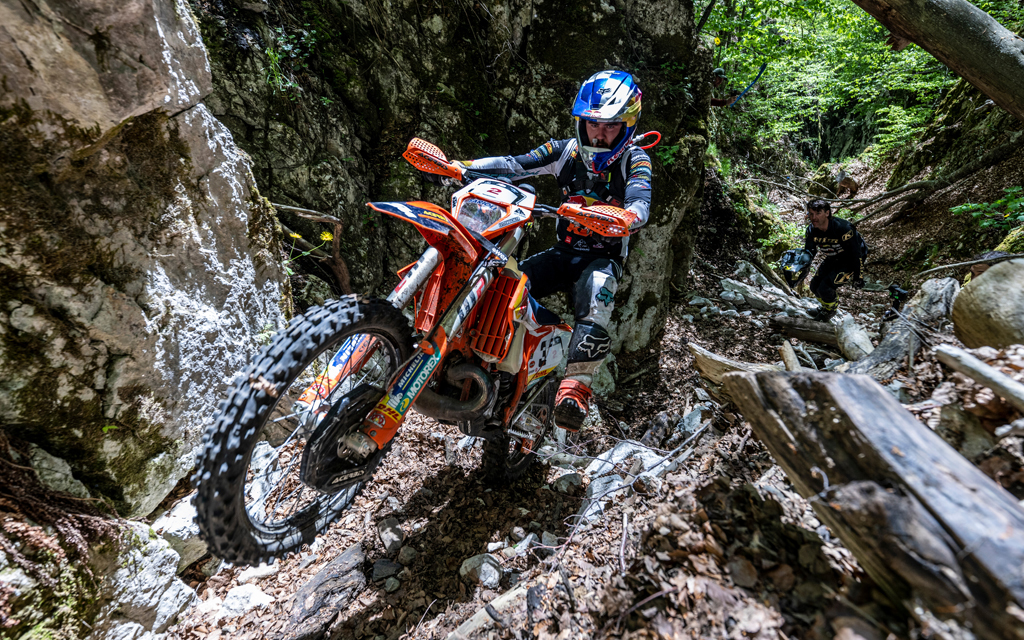 Lettenbichler back from injury with Xross Hard Enduro Rally victory

Manuel Lettenbichler triumphed at the Xross Hard Enduro Rally in Serbia to boost his 2022 FIM Hard Enduro World Championship title hopes as Billy Bolt claimed the joint overall lead. Here is all you need to know:

– Spaniard Mario Roman won the 2022 season opener at the Minus 400 in Israel with Britons Bolt and Graham Jarvis second and third respectively ahead of the second stop of eight this season in Serbia.

– German racer Lettenbichler made a triumphant return from a knee injury at this week’s second stop, though, to secure the top step of the podium from Teodor Kabakchiev and veteran legend Jarvis.

– With the outcome boiling down to the final day of racing, all eyes were on KTM Factory Racing’s Lettenbichler who started Day Three as the new race leader after an outstanding Day Two of riding.

– Off to a flying start, Lettenbichler topped the time sheets on the first Special Stage to extend his lead by another three minutes as Sherco Factory Racing’s Wade Young took second with Bolt third.

– A short 44-minute stage awaited riders for Special Stage 2 and it was Jarvis who edged out Bolt by four seconds, with Lettenbichler shadowing them across the line for third.

– The final Special Stage of the rally was almost a formality for Lettenbichler and, with no mistakes made, the KTM rider did enough to win round two of the 2022 FIM Hard Enduro World Championship.

– Lettenbichler, 24, revealed: “I am honestly so surprised to have won. I didn’t come here expecting to, but things began to go my way and I got the job done. I think yesterday was the deal breaker, building a big lead. But I know luck can quickly change so I had to keep focused. It’s been a long time away from racing so to be back winning, it’s amazing.”

– History was made behind as Kabakchiev (Team Bulgaria powered by ECONT) become the first Bulgarian to finish on the podium as Jarvis (Jarvis Racing Team Husqvarna) put in another great performance to finish in third and share the title lead with Husqvarna Factory Racing’s Bolt.

– The 2022 FIM Hard Enduro World Championship moves onto Austria next and the iconic Red Bull Erzbergrodeo across June 16-19.