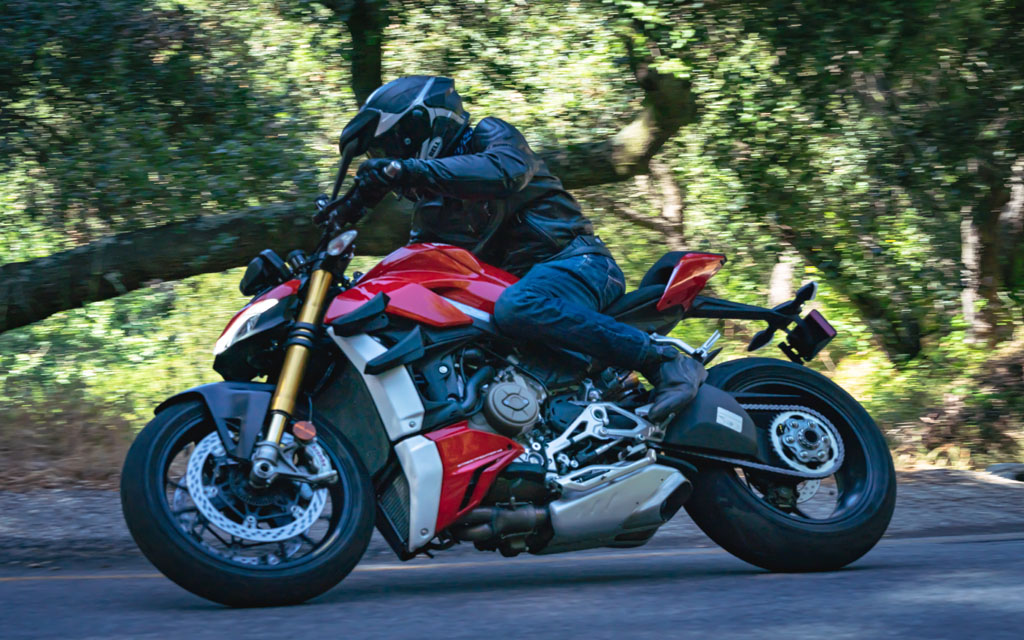 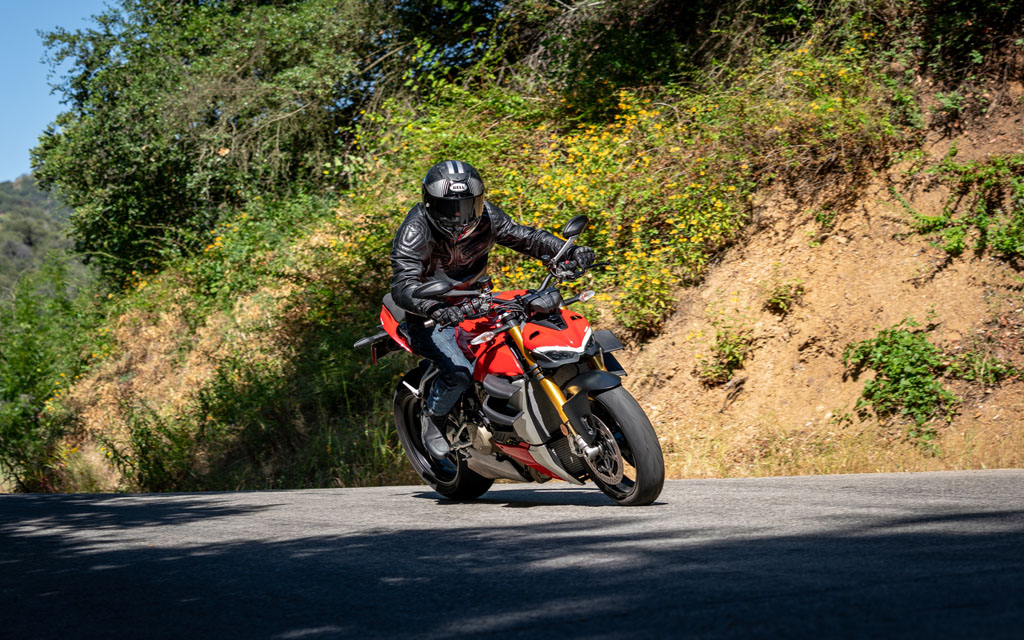 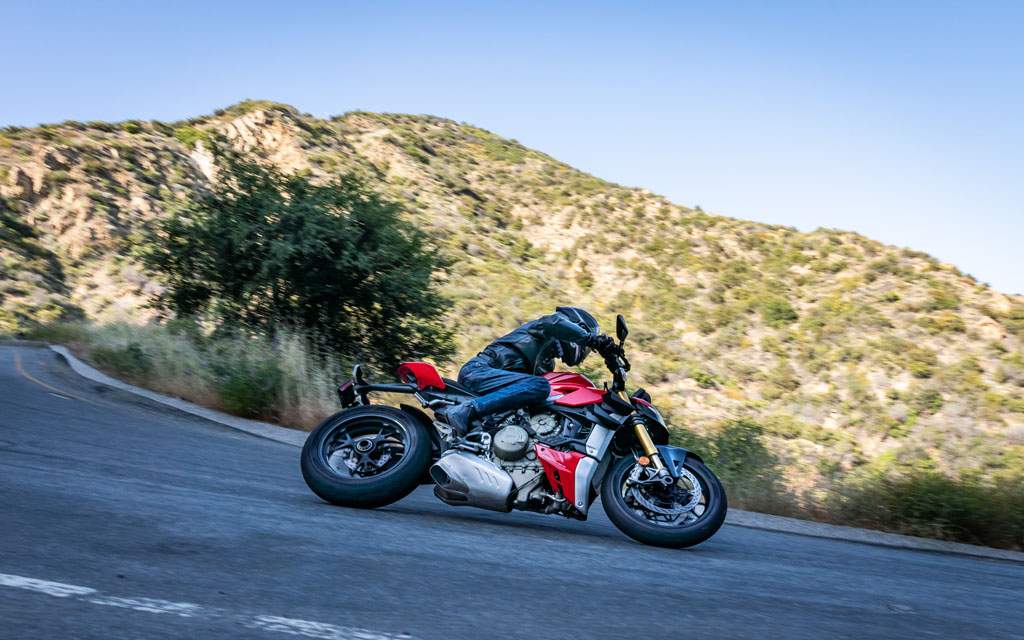 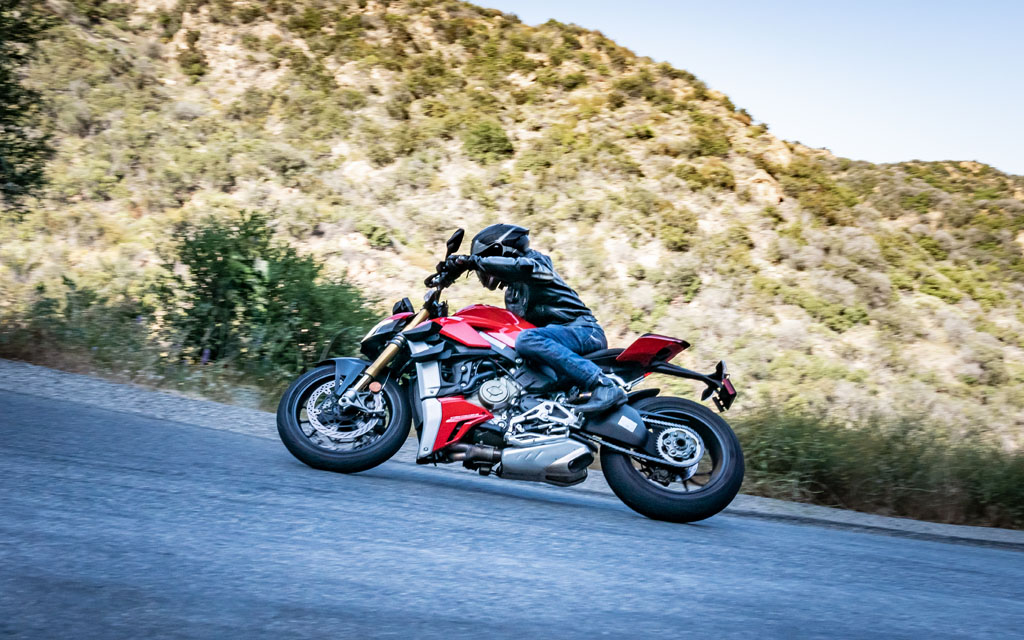 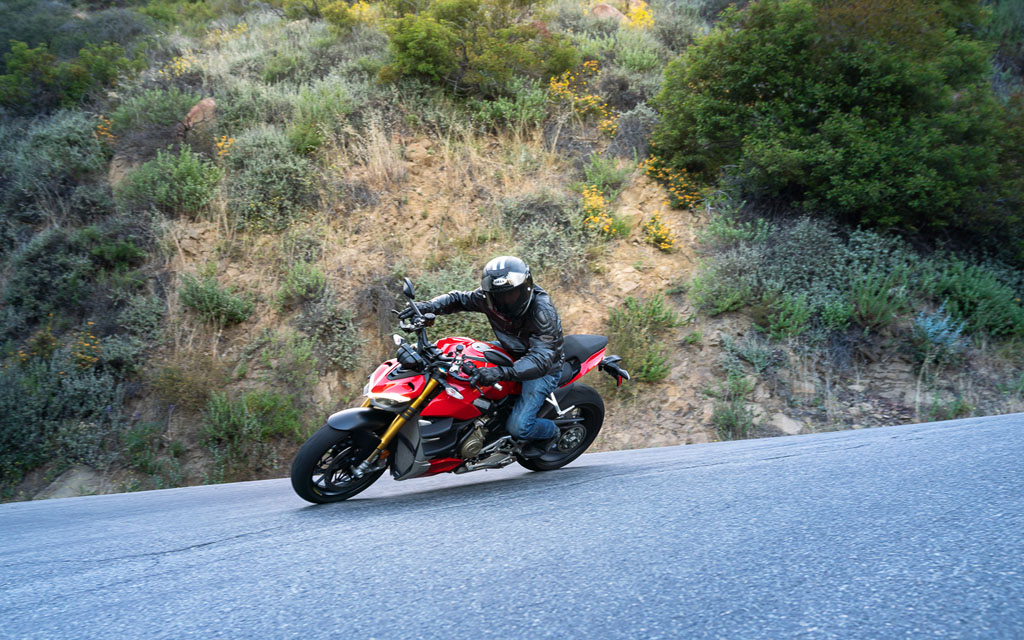 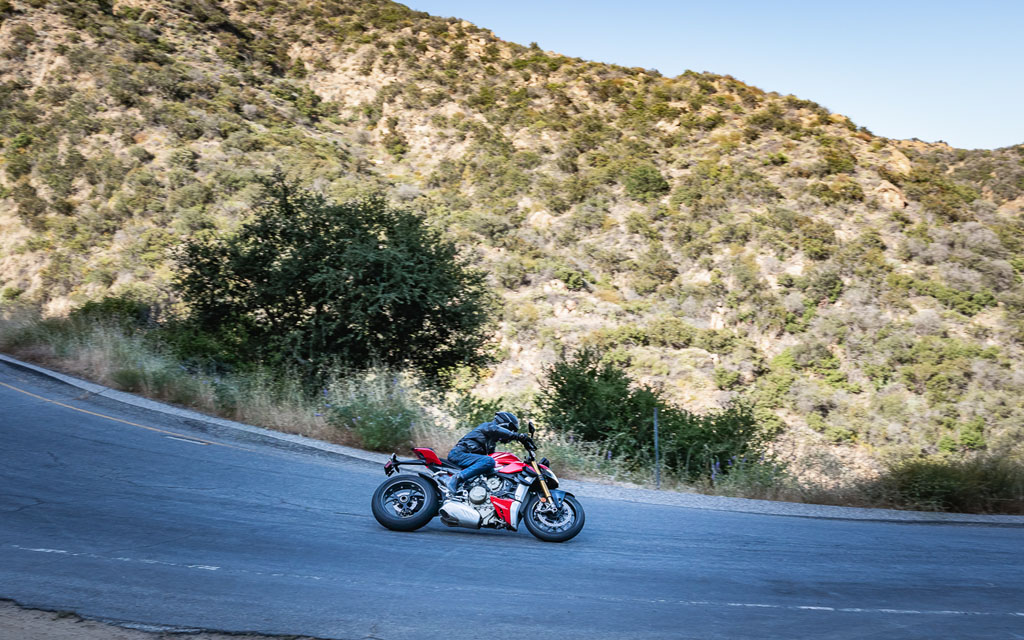 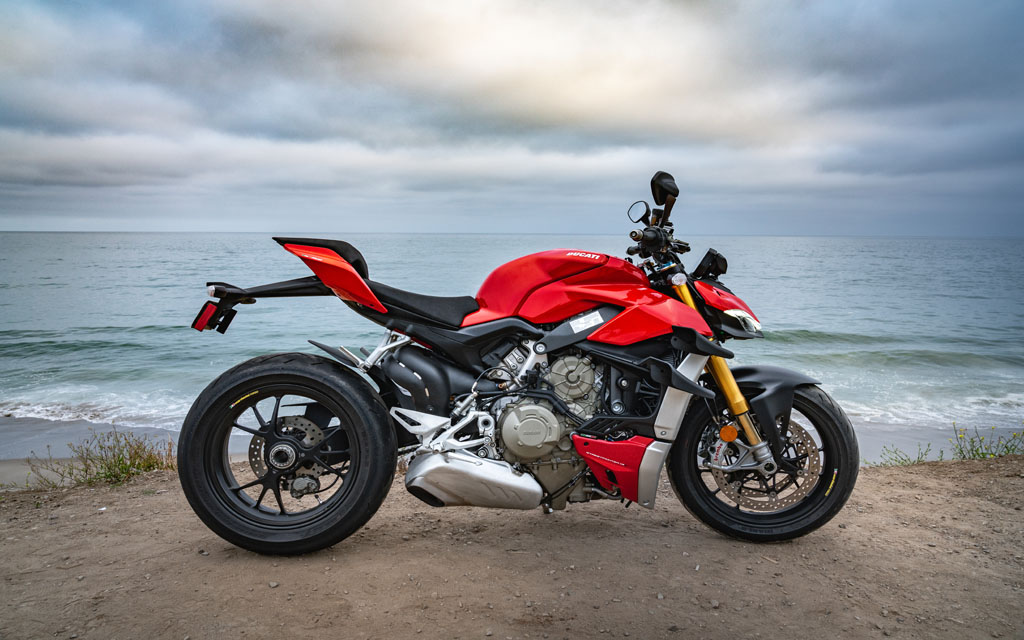 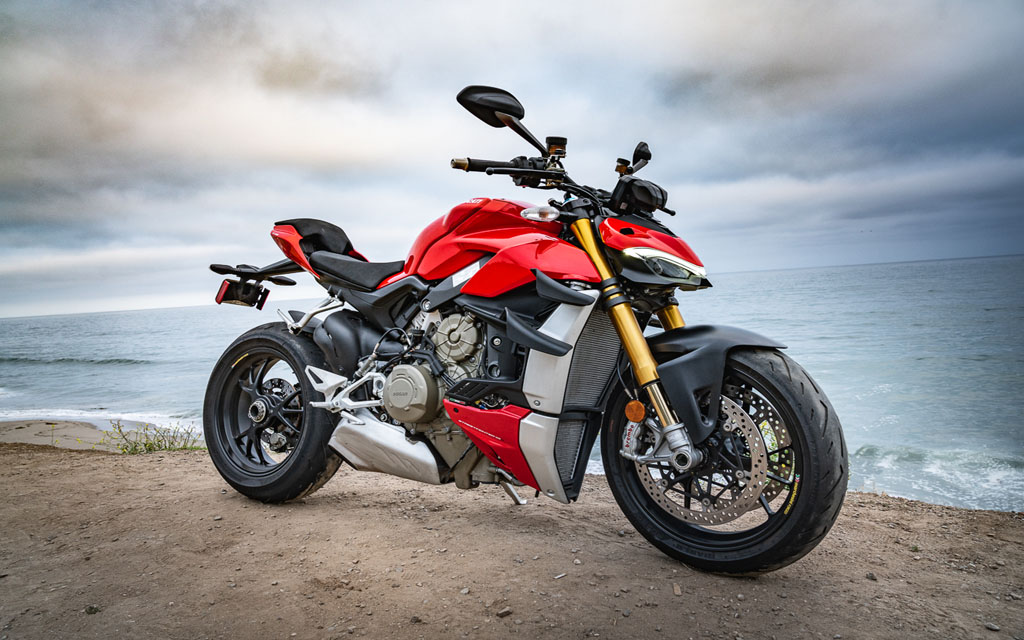 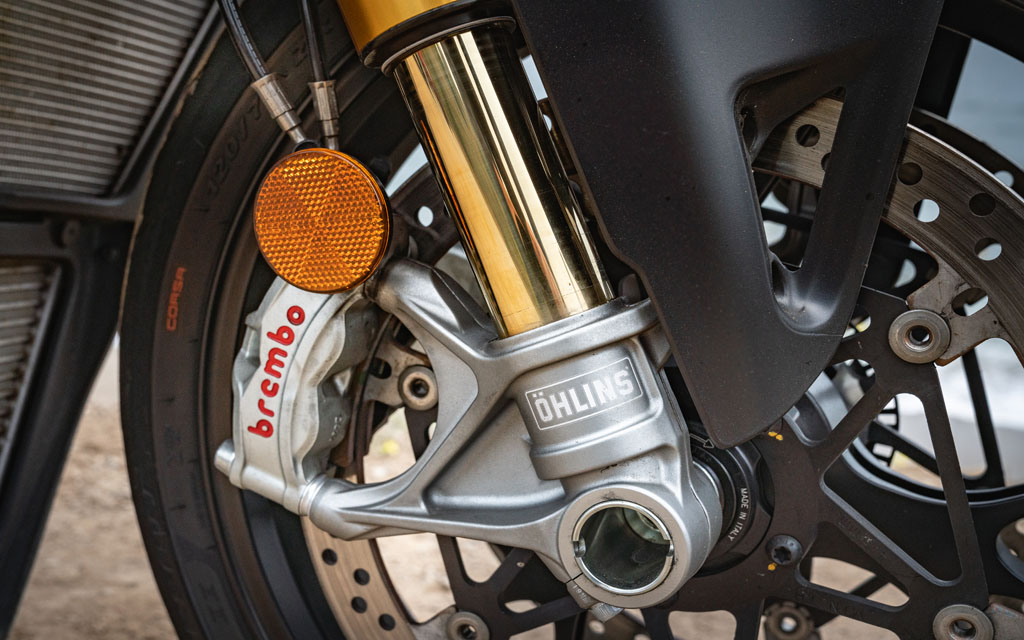 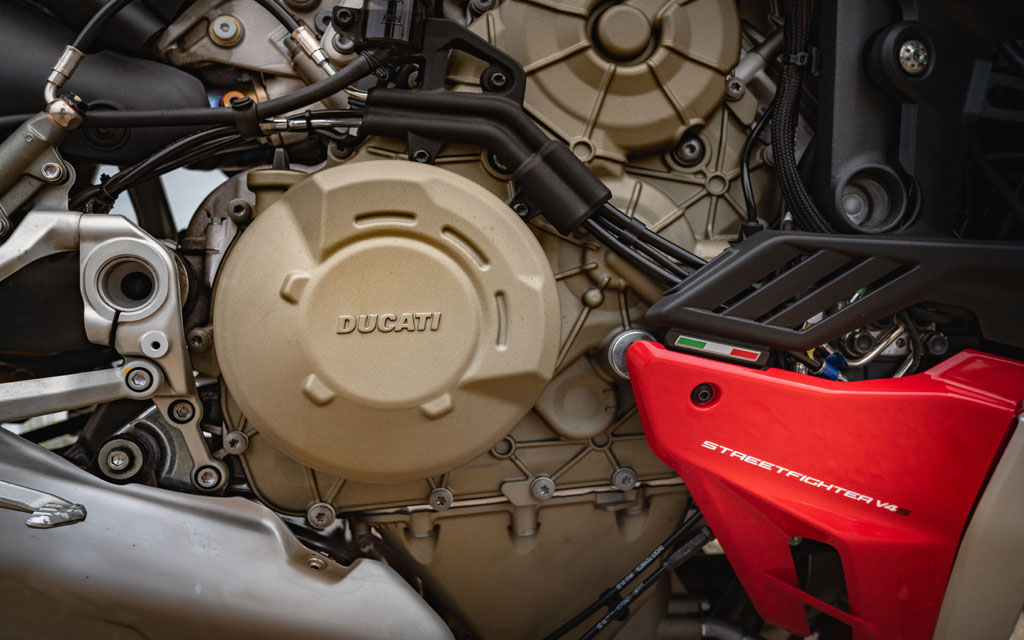 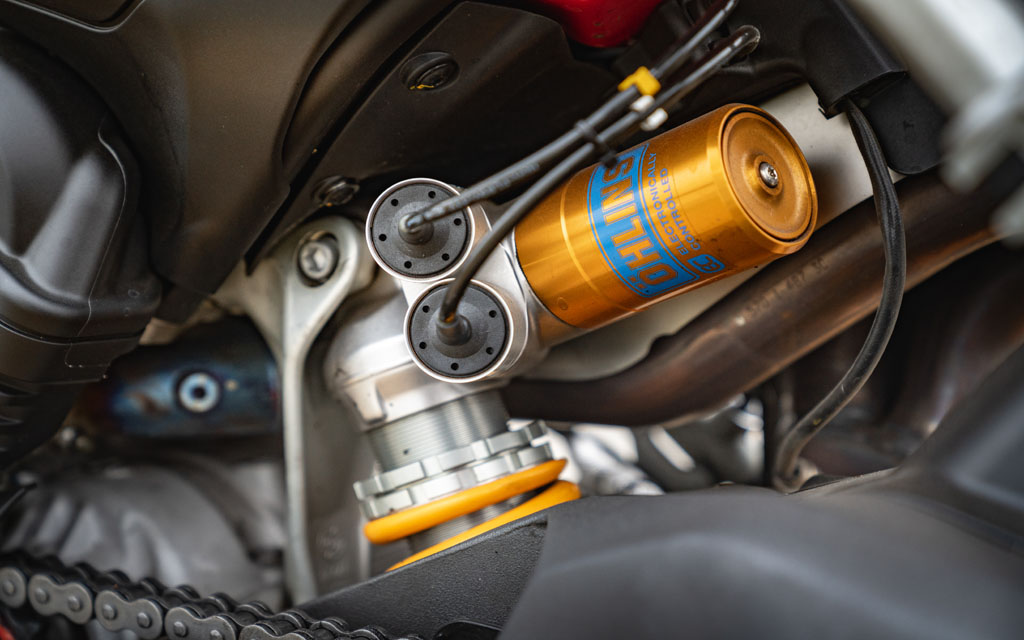 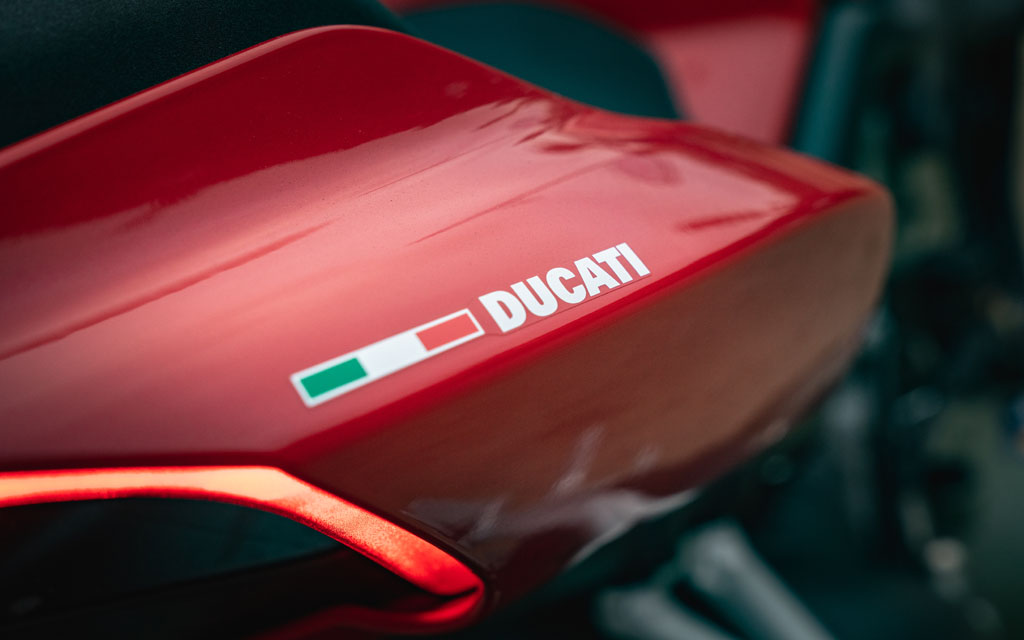 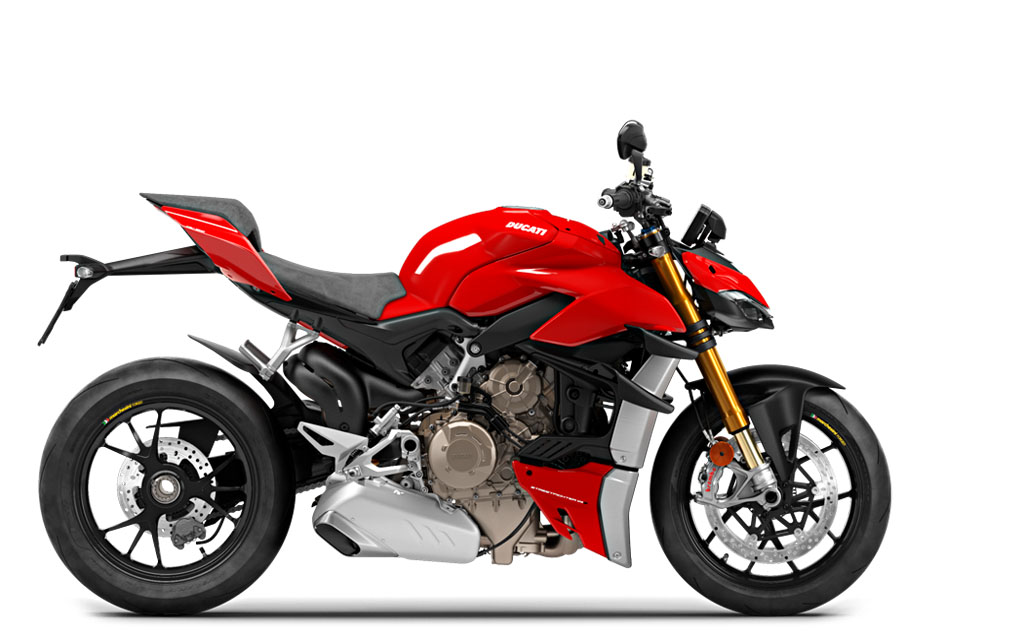 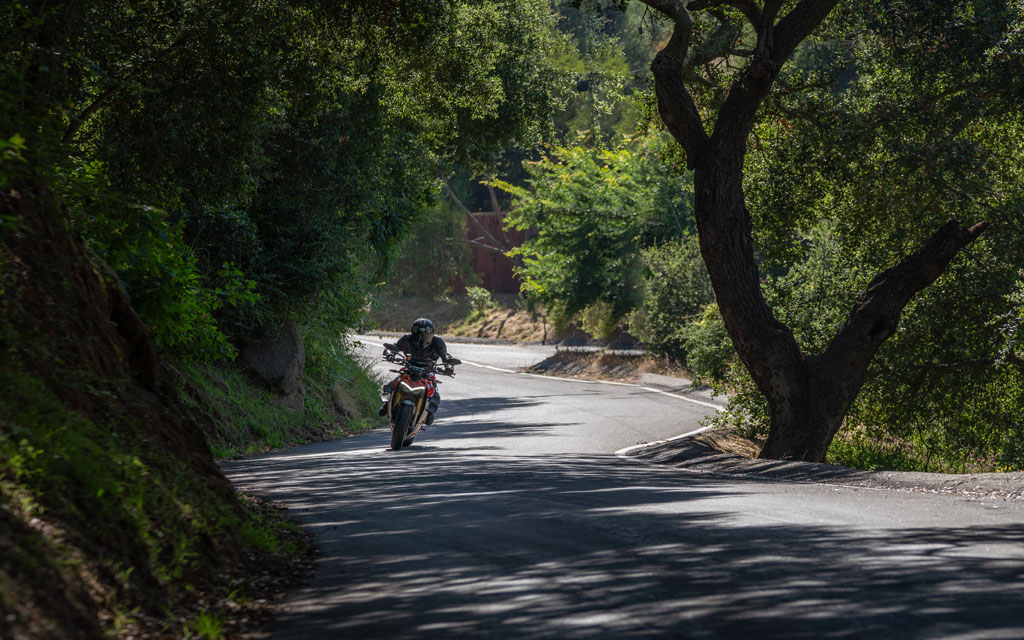 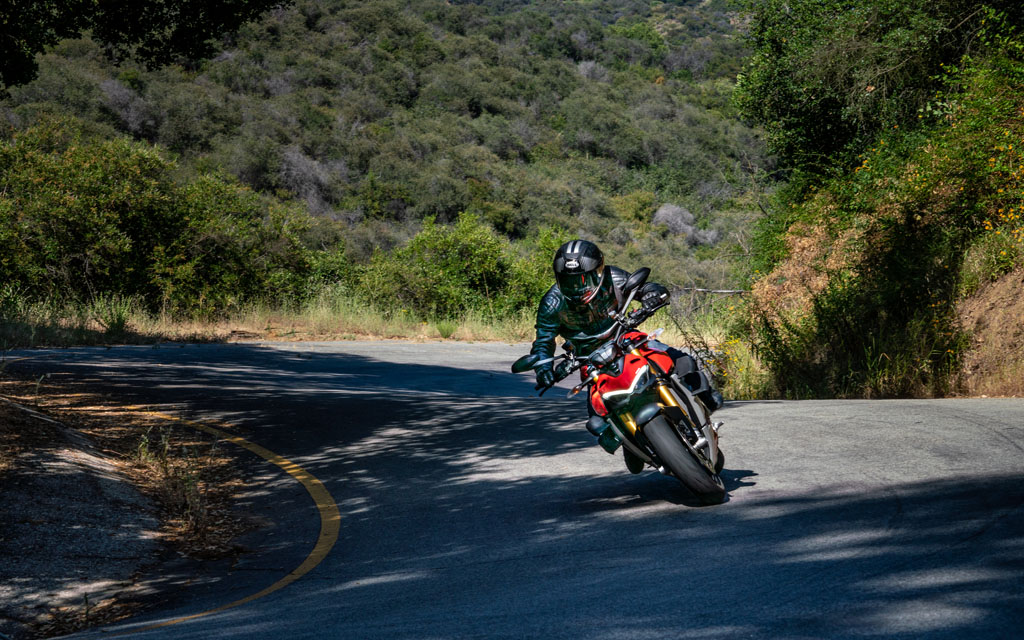 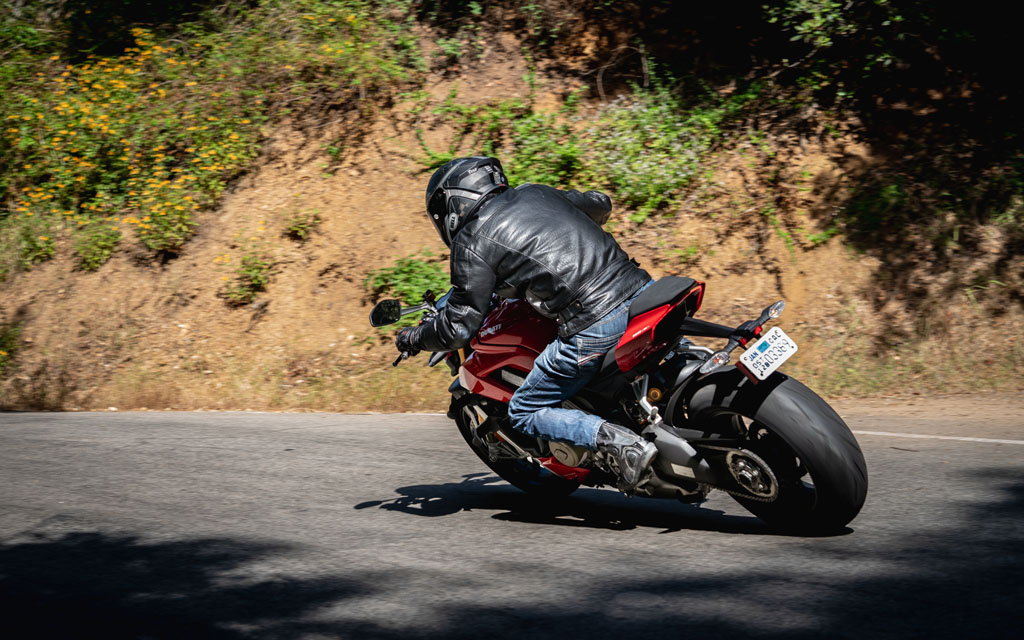 For MotoGP fans, a sensible streetbike

Motorcycle racing is a fascinating mix of high technology and high-athleticism, and its pinnacle is MotoGP where virtuoso riders duel aboard mighty four- cylinder motorbikes. It’s heroic and inspires dreams of being a masterful pilot aboard such a sensational machine at the apex of motorcycles.

A reasonable facsimile can be found in an open-class sportbike like a Yamaha R1 or Ducati Panigale V4, and they are nothing short of fantastic when caned around a racetrack. But, really, how often are you riding your street motorcycle at a track? Litre- size sportbikes are less fantastic when ridden on typical public roads, with punishing riding positions and oftentimes excessive heat in stop-and-go traffic.

Well, this latest Ducati could be the pragmatic streetbike of your MotoGP fantasies. Essential to the Streetfighter V4’s streetability is its handlebar placed more than 150 mm higher than its Panigale V4 brother’s, with footpegs placed lower by 20 mm, changing the ergonomics from cramped to almost roomy.

The key element of the Streetfighter V4 is its phenomenal engine. The Desmosedici Stadale V-4 gets its basic architecture from Ducati’s MotoGP bike, with cylinders set 90 degrees apart and with a counter-rotating crankshaft orientation to help deliver quicker steering responses like its GP cousin. The SF’s V-4 isn’t limited to specific race regulations, so it’s super-sized to 1103 cc.

Hearing the motor bark to life evokes images of pit lane at Mugello, sounding like a cross between a typical V-4 and a V-Twin because of Ducati’s unique Twin-Pulse firing arrangement. One run through the gears will convince you this is one of the most phenomenal engines ever bolted into a motorbike.

This powerplant sounds vicious and accelerates even more so, brain-meltingly absurd for a streetbike and aided by 10 percent shorter gearing than its Panigale sportbike brother. Clever engine tuning keeps the motor in a large sweet spot, supplying plenty of power throughout its rev range before surging to its max torque of 90 lb-ft at 11,500 rpm and its horsepower peak at 12,750 rpm with a claimed 208 ponies! And there’s still a river of overrev power until the V-4 reaches its stratospheric 14,500-rpm redline. At that point, you’d better hope you’re at a racetrack or far away from the gendarmerie.

For context, consider that Ducati’s previous big-cube Streetfighter, the 1098 introduced in 2009, had “only” 155 hp. Aimed at a desolate road, there is almost no vehicle that can pile on speed quicker than the SF V4. Joy and terror!

Typical for contemporary Ducatis, the Streetfighter has the full complement of electronic rider aids that can be individually customized to a rider’s preferences. A 6-axis Inertial Measurement Unit (IMU) informs cornering-ABS as well as traction, wheelie and slide controls. Personally, I prefer a bit of TC but want to control my own wheelies, so I select TC6 and WC0, and it’s a welcome feature to be able to control them independently. Adjustments are accomplished with intuitive navigation from the left-side switchgear and a vibrant colour TFT instrument screen. An up/down quickshifter makes swapping cogs mostly seamless, with the one-two shift being the least smooth.

Other street niceties include self-cancelling turnsignals that intelligently switch off forgotten blinkers nearly as quickly as you would do it manually. Excessive engine heat is mitigated by a system that switches off the rear two cylinders at idle when coolant temperature exceeds 167 degrees, appropriating a trick introduced by Harley-Davidson (colloquially known as parade mode) and recently followed by Indian. The cylinder deactivation is sensed at idle via a subtle variation in audio and feel, sounding briefly a little like a slight repetitive misfire before smoothing out. It seems to help alleviate excess heat, but there’s no hiding from the BTUs generated by a 200-horsepower engine sitting between your legs.

As long as we’re dreaming of Italian sportbike practicality, we’ll encourage you to dig deeper and upgrade from the base Streetfighter (Cdn $23,995) to the S version tested here, which includes Marchesini forged wheels and Öhlins electrically controlled suspension for an extra $4k. The lighter wheels ramp up the bike’s agility, and DES solves the problem of finding the delicate balance of plushness and control—just leave it set to its Dynamic mode

and it’ll back off harsh damping if you’re not riding aggressively. Or set the ride mode to Street, and it’ll deliver surprisingly plush ride quality along with smooth throttle reactions.

Handling is what you’d expect from a race-bred Ducati. It loves being ridden hard, and it is a cooperative accomplice at unwinding twisty roads both fast and slow, aided in speedy steering by its backward-rotating engine and lightweight wheels. It’s much more composed than the previous V-Twin 1098 Streetfighter, offering a stable platform in every environment, partly thanks to a longish 1488 mm wheelbase. Brakes are top-shelf Brembo Stylema monoblocks up front that deliver all the bite and feedback you’d ever want. Curb weight is a reasonable 201 kg.

Although wind protection could be charitably described as minimal, the moderately leaned- forward riding position makes a 125 km/h cruise reasonably agreeable. Seat height is a fairly lofty 845 mm, but it’s far more accommodating than any 208-horsepower sportbike has a right to be, and the passenger seat is comfortably flat if not comfortable. Adjustable brake and clutch levers fit hands of all sizes.

Although this new Duc’s appearance isn’t traditionally graceful, its sexy AF and its captivating appearance earned it the award for “most beautiful bike” at the 2019 EICMA show in Milan. The SF’s sculptural tail section is an interesting visual treat that practically begs you to bend down and peer through it from behind. And its MotoGP-inspired wings certainly contribute to the SF’s exoticness, even if they’re pretty much useless for downforce at street speeds. Nitpick: the finish on the wings is dull and owners complain the matte finish is difficult to clean up.

One way the Streetfighter falls short of practicality is its voracious thirst for fuel from its 16-litre tank. It wasn’t unusual to see the low-fuel lamp illuminate with less than 170 km on the tripmeter.

Okay, so a MotoGP-derived Italian sportbike is a world away from a pragmatic motorcycle. However, it only takes a quick ride up a canyon road to have its hook deeply pulled, accompanied by an intoxicating aural soundtrack and eye-watering acceleration. Anyone who venerates racing might imagine they are Desmo Dovi cutting fast laps at Assen or Monza, and its MotoGP lineage will ignite your soul whether unwinding a twisty road or profiling at a bike night.

If a $23,995 MSRP doesn’t terrify your wallet, the Streetfighter V4 is unparalleled for living out your MotoGP or Superbike dreams while riding on public roads. Aprilia’s Tuono 1100, one of my all-time favourite sport motorbikes, has been put on notice.