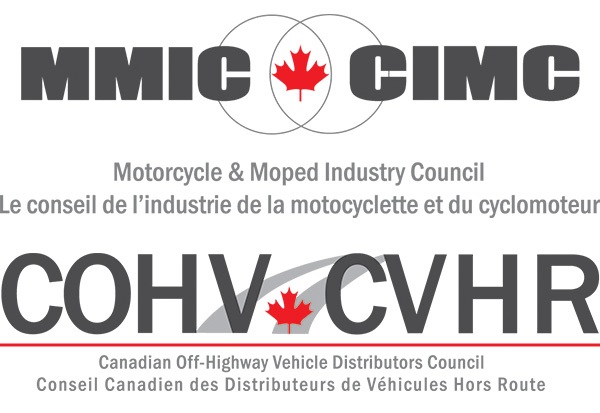 It’s hard to believe that Bob won’t be at the helm of the MMIC/COHV/PSS ship today. Bob retired on Friday, December 10th after 37 years and 7 days in the office.

Bob attended Western University and studied political science. He rode dirt bikes on the family farm in Wyoming, Ontario and joined MMIC in 1984 as Government Relations Manager. He quickly transitioned into the role as president.

To reflect back, sport bikes with fairings were a new thing (1983 Honda Interceptor). ATVs were a brand new off highway vehicle (Suzuki LT125 in 1982 with Honda & Yamaha following in 1984).

Bob played an instrumental role in growing the MMIC from 4 member companies up to its current 13 member status. On road Bob helped create Open Road Insurance when the motorcycle insurance market needed an alternative. He was also responsible for the creation of the Rider Training Institute (RTI) to respond to a lack of available motorcycle license training.

He guided the creation of COHV as the ATV market boomed. COHV currently has 8 member companies. Bob has left his fingerprints on issues across the country. He provided positive reinforcement when land access for OHVs were threatened. He was there when OHV use was threatened in the Ganaraska Forest and he was there when the eastern slopes of the Rocky Mountains were threatened.

Bob was also the guiding force behind the creation of Power Sport Services (PSS) and the creation of a national motorcycle and powersports show series. The show series has provided a powersports fix for 100s of thousands of enthusiasts in 6 cities across the country. Covid has had disastrous effects on the event industry but though Bob’s management we can be confident that the shows will return when we are safe to do so.

Bob’s tenure and dedication are truly unique. He was always the first person in the office. He attributed his early to rise habits from growing up on a farm. In December of 2020 he suffered a heart attack while shoveling snow. His message to the staff was he would be off for 3 days recovering from surgery. They don’t make them like Bob anymore and the powersports industry will miss him!