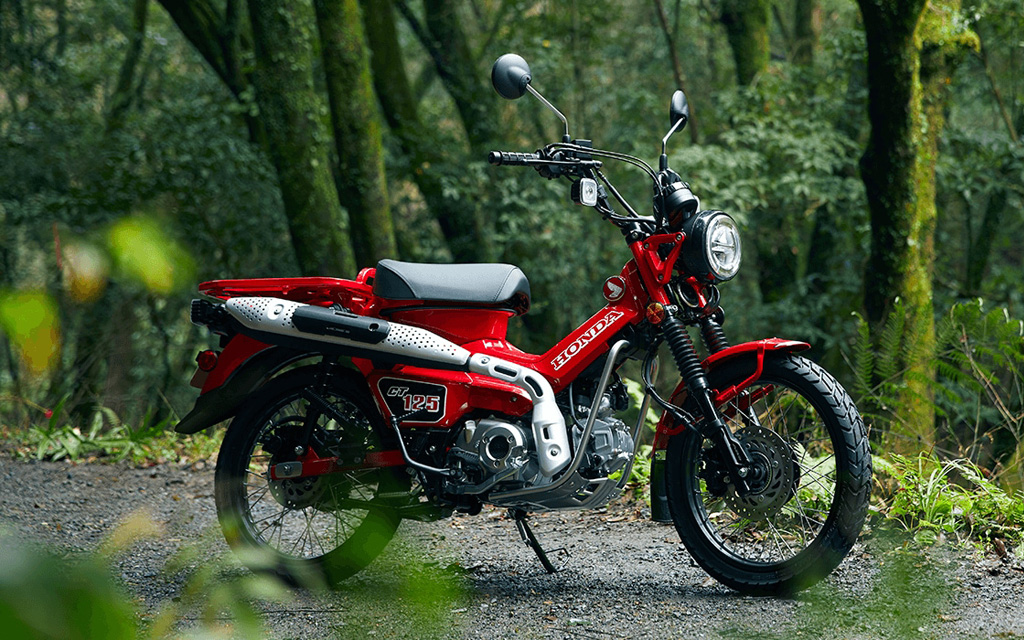 Pick your poison: big, flashy bagger, or cute little scramblerette. This year, Honda and BMW are introducing two new models that are extremely interesting—not because they feature new technology, but because they tell us a lot about where the motorcycle industry thinks the future is headed.

First up, the BMW R18. You’ve probably seen photos of this mega-cruiser by now, because BMW’s been clever about publicity for it. The marketeering started with rumours of a new 1800 cc boxer engine, which eventually appeared in a series of custom bikes BMW commissioned and flogged at various custom bike festivals. Eventually, in 2019, we saw the production version, sort of, when BMW confirmed it would manufacture the machine, and brought it to the show circuit.

The R18 never made it to Canada’s MICC shows, but I did see it at the IMS Long Beach motorcycle show last November. Even though BMW had its new 900 lineup on display, the R18 was the focus. There was a constant crowd ogling the machine, and it wasn’t all straightlaced white collar Beemer geeks. A lot of the slobbering horde wore stereotypical cruiser garb, and this tells us a lot about BMW’s hopes for the bike. There’s all sorts of marketing talk about the company’s midcentury-heritage-building carefully crafted Euro-style roadsters, but it’s hard to imagine the vintage bike crowd dropping their R50s and rushing to the new machine.

Conversely, when you see the R18 in person, you understand why the V-twin crowd is suddenly interested in BMW. The metal-flake paint sucks the cruiseratti in like a flashy trout lure. Once they’re up close, BMW sets the hook with the rest of the bike’s high-end finish, and the promise of power and swagger. Surely, those machined cylinder heads protruding will tell everybody, Why yes—I do have a massive engine.

Of course, the engine itself isn’t really anything super-special. It’s an air-cooled twin, the same sort of motor that cruisers have been using since the days of the dinosaur, just configured differently. Surprisingly, it’s only rated for 91 horsepower, less than the big-money V-twin competition—and that’s very much the competition for the R18. It’s supposed to be in Canada in late 2020, with MSRP starting at $20,895, a price that puts it around the level of Indian and Harley-Davidson’s big-engined roadsters.

So why did BMW introduce this machine? It’s a question lots of people are asking, but the initial answer is obvious: BMW must see a future in the luxury cruiser market, and intends to carve out some space there.

The bigger question is, why does BMW think that? If there’s been a constant refrain over the past 10 years, it’s that big cruisers are dead. Supposedly, the end of the expensive V-twin is nigh, as the baby boomers slip off into Can-Spyder ownership, and then into adult diapers and Geritol.

I don’t know how BMW’s bigwigs have determined there’s a future for this machine, but it’s intriguing to see the company introduce an all-new platform for a segment, just as we’re being told the whole segment itself is dead. Maybe that’s why, initially, BMW debuted this bike at shows like Villa d’Este, instead of Sturgis—maybe it envisions new, youthful fans for the cruiser segment, riders who will happily buy a Beemer while rejecting Harley-Davidsons and other V-twin machines as being only fit for the oldsters.

Honda’s new kinda-sorta dual sport is an incredibly different machine from the R18, but in some ways, it’s aimed at the same bracket, and sold with the same basic marketing. Like BMW, Honda is recycling a classic motorcycle design, with new technology. It’s aimed at buyers who want a machine that recalls yesterday’s ideals, but with today’s up-to-date features. But, instead of a massive, heavy cruiser with a brutish engine, Honda’s reviving its old offroad-friendly CT step-through line, with the budget-friendly engine from the Grom minibike.

Honda’s getting lots of use from this engine already, using it for the Wave scooter originally, then the Grom, then the Monkey and Super Cub scooters (neither of which is available in Canada). It’s a smart idea: the engine has proven itself trustworthy, it’s cheap to produce, and customizers and tuners love it. There’s a huge aftermarket of hop-up parts for this tiny 125 cc air-cooled, fuel-injected single, and like the Ruckus scooter before it, many tinkerers buy these 125s because they’re cheap and easy to modify.

Although the CT125 looks a lot like the original CT90 and CT125, there are some key differences. Along with fuel injection, the CT125 also gets ABS, and it’s a bit heavier. It’s got a semi-auto gearbox setup, though, and even has a kickstarter.

The CT125 first appeared on the 2019 show circuit; Honda confirmed it for production around the 2020 Tokyo Show. Immediately, North Americans took notice. The world has changed a lot since the 1970s and 1980s heyday of the CT90 and CT110, but people still want fun, easy-to-ride motorcycles, and with the similarities and improvements, surely this machine would be a hit in Canada and the US, right? Tell us the MSRP, quick, so we can start saving our spare nickels!

So far, it’s been crickets. Honda Canada tells me the CT125 isn’t coming in for 2020, and so far, there’s been no word about 2021 production headed here, or even to the US. So far, all the marketing has been aimed at Asian buyers. And here’s where it gets really interesting: the messages Honda is using in Southeast Asia is the exact same message Honda used in North America in the 1960s and 1970s—get outside, have fun, explore, on your new Honda.

Now, there are no doubt several good reasons why Honda is selling the CT125 in Asia first, including the COVID-19 pandemic (more on that in a minute). But again, there’s no need to overthink the obvious: One big reason why Honda is selling the CT125 in Thailand with adventurous, outdoorsy marketing, is because Honda figures it can make a lot of money there. Now, what does that tell you about Honda’s perception of the North American market?

So now, we can lay out the different bets that Honda and BMW have laid out. With the R18, BMW is wagering developed markets have enough interest in classic motorcycles, and enough money, to make a luxury retro bike worthwhile. With the CT125, Honda appears to be gambling on the developing markets instead, selling the new Hunter Cub as an aspirational machine in Southeast Asia instead of a toy for hipsters and reminiscent adults in North America.

Who’s going to be right? The trouble now is, with interference from COVID-19, everything’s been thrown out of whack anyway. Older people have lost their retirement savings, younger people have lost their service jobs. Surely the moto sector should be a wreck? Surprisingly, many Canadian dealerships are selling bikes like mad, as shutdown restrictions are lifted. Maybe, just maybe, BMW’s bold gamble will prove right, and Honda will see that as its opportunity to sell its own modern classic in Canada. Let’s hope so—if the initial interest in both these bikes holds up, they could prove important to the industry’s recovery from COVID’s initial hit.