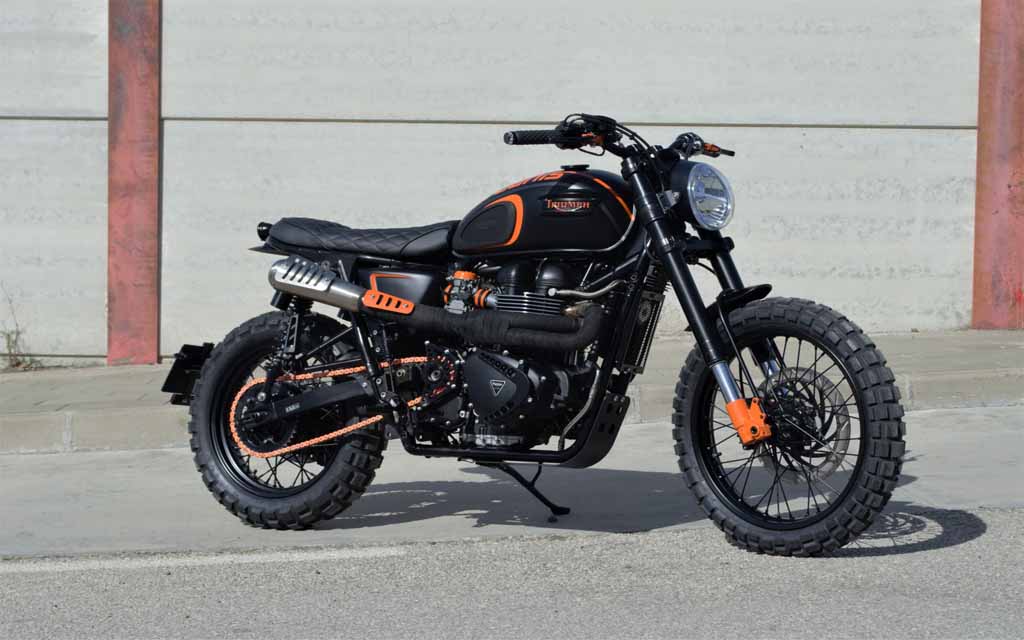 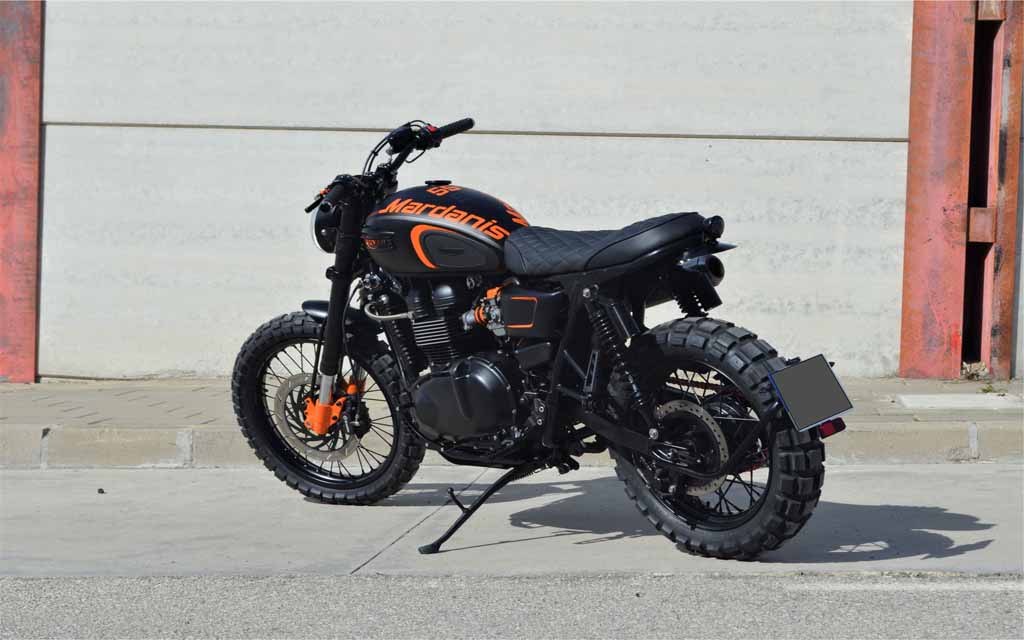 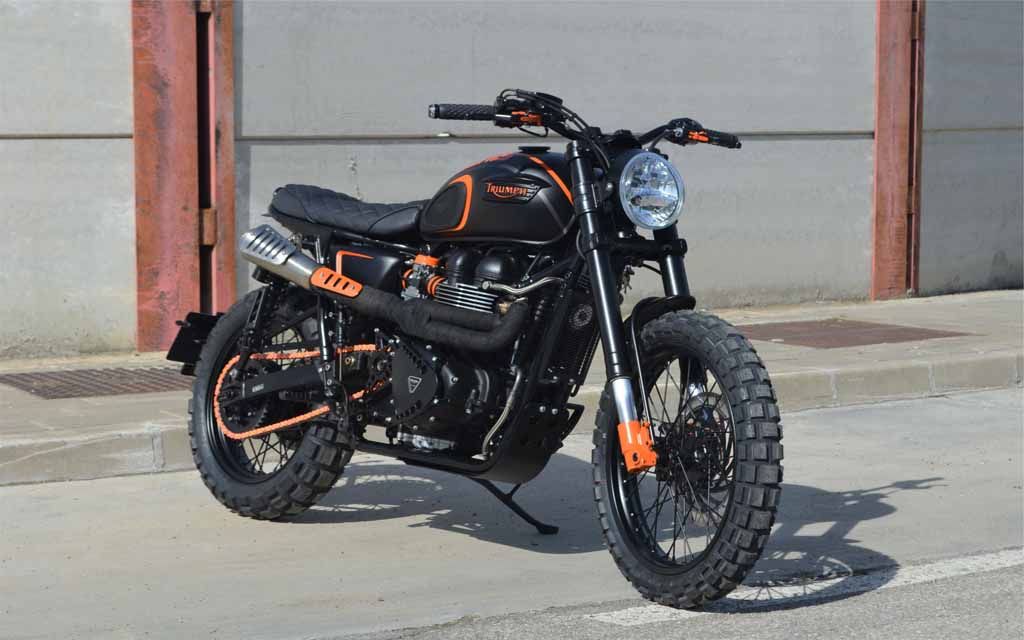 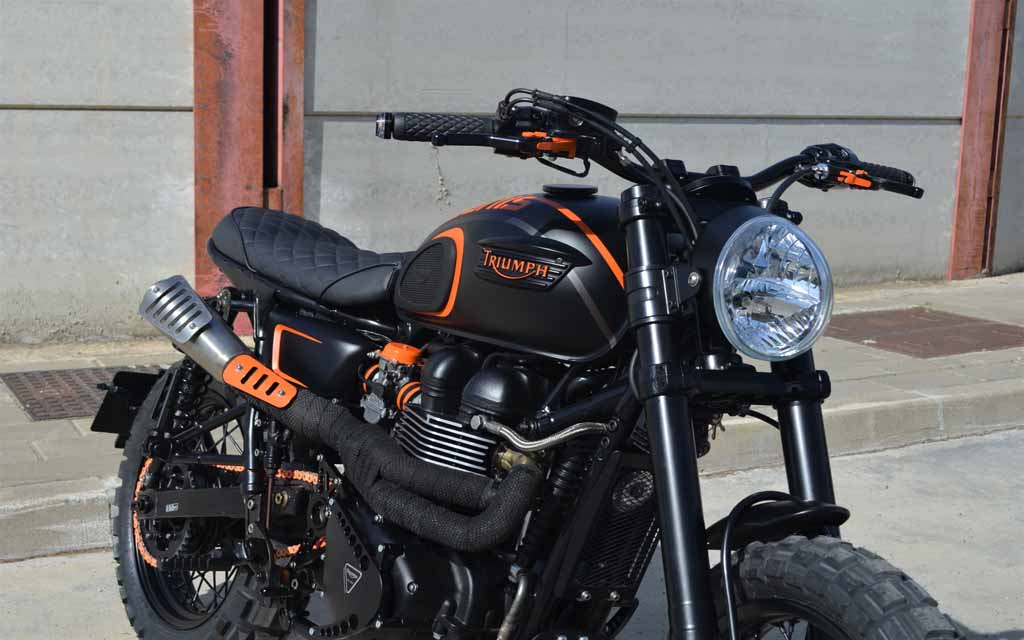 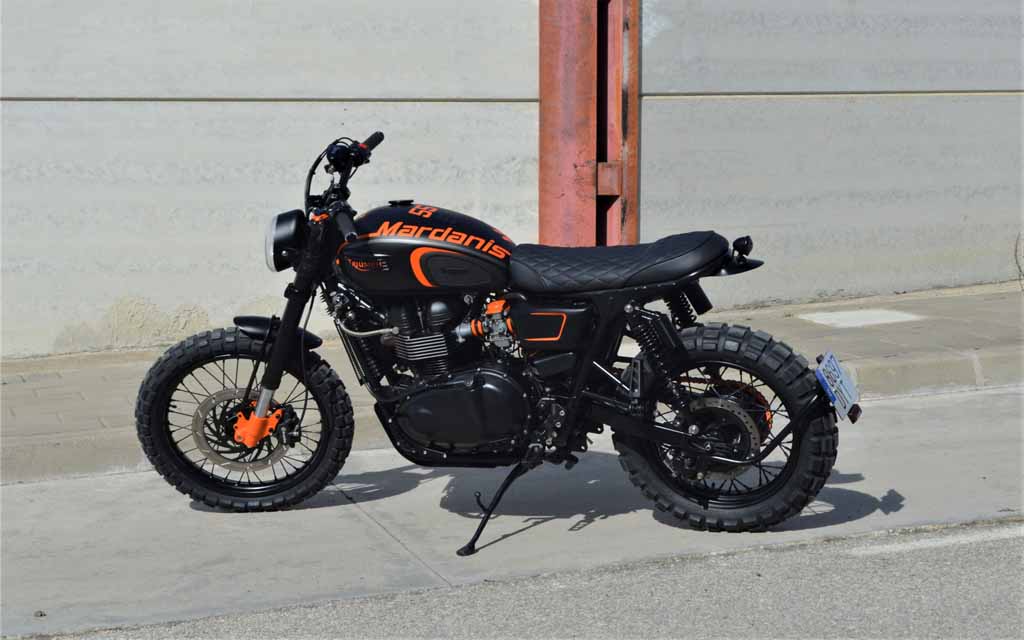 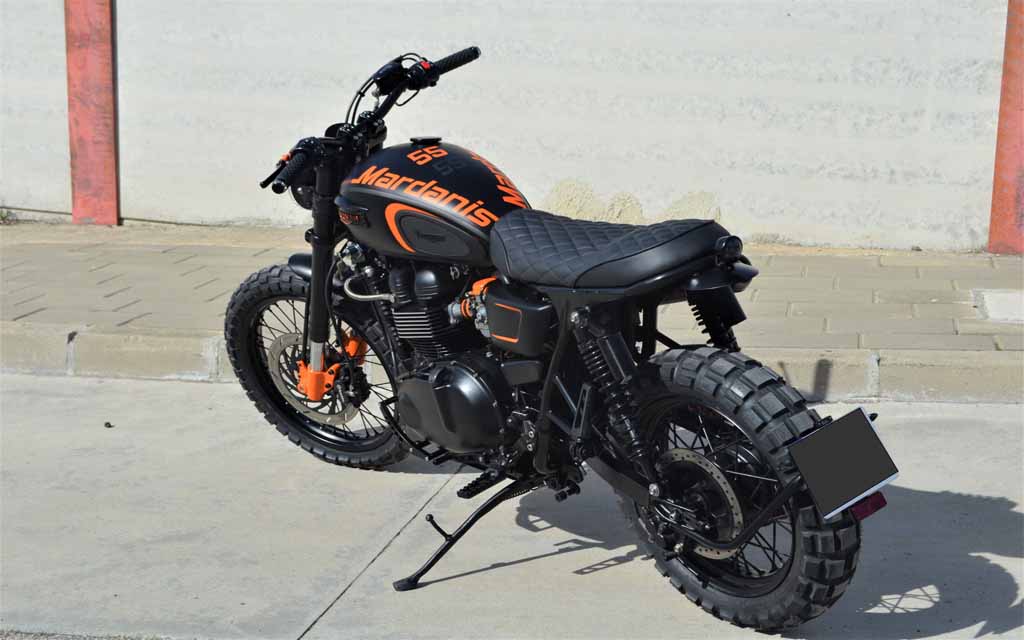 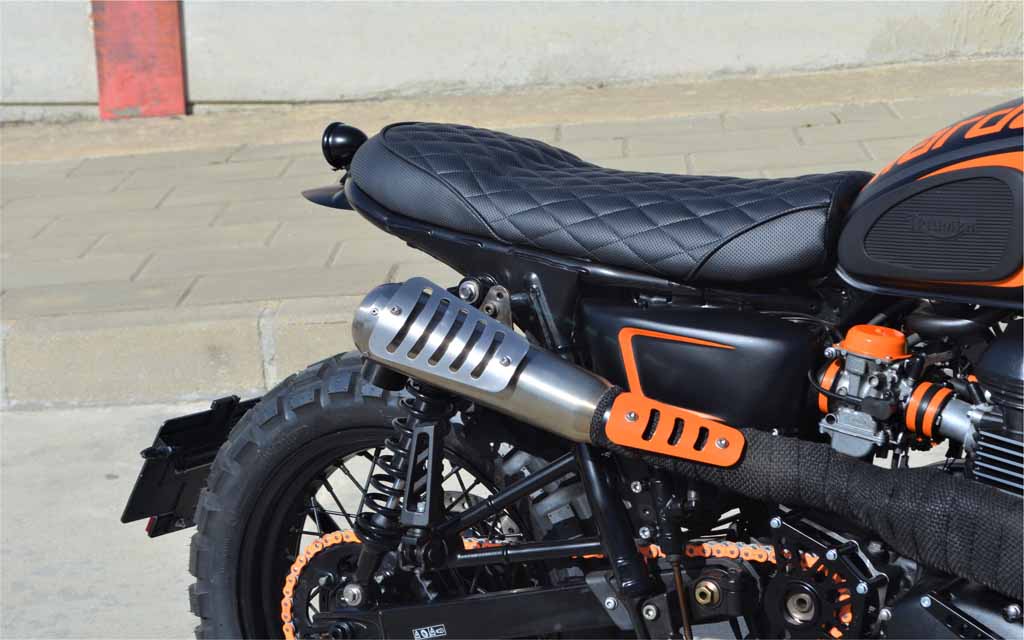 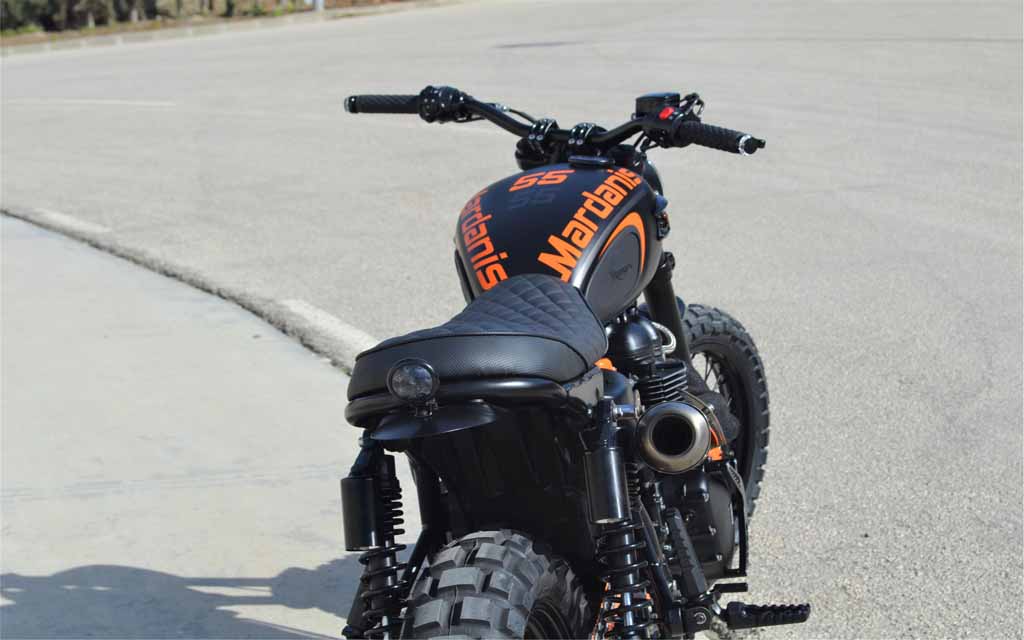 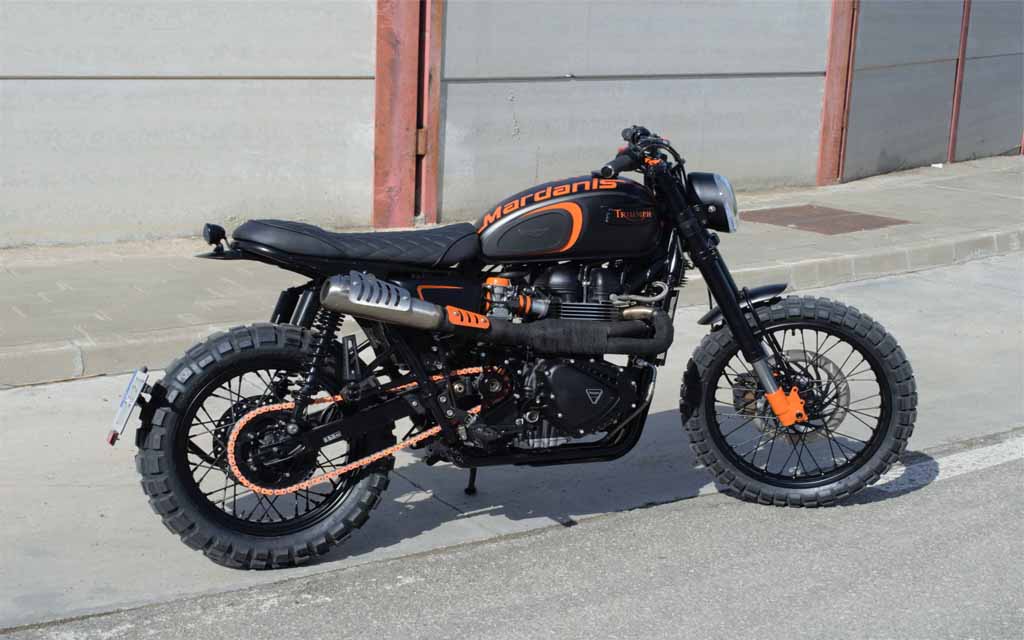 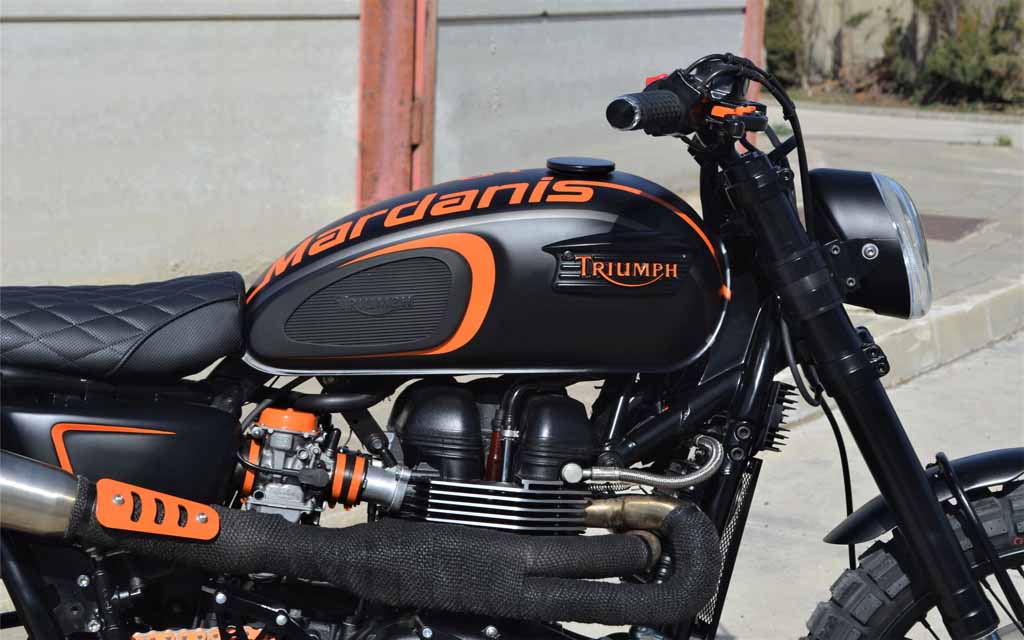 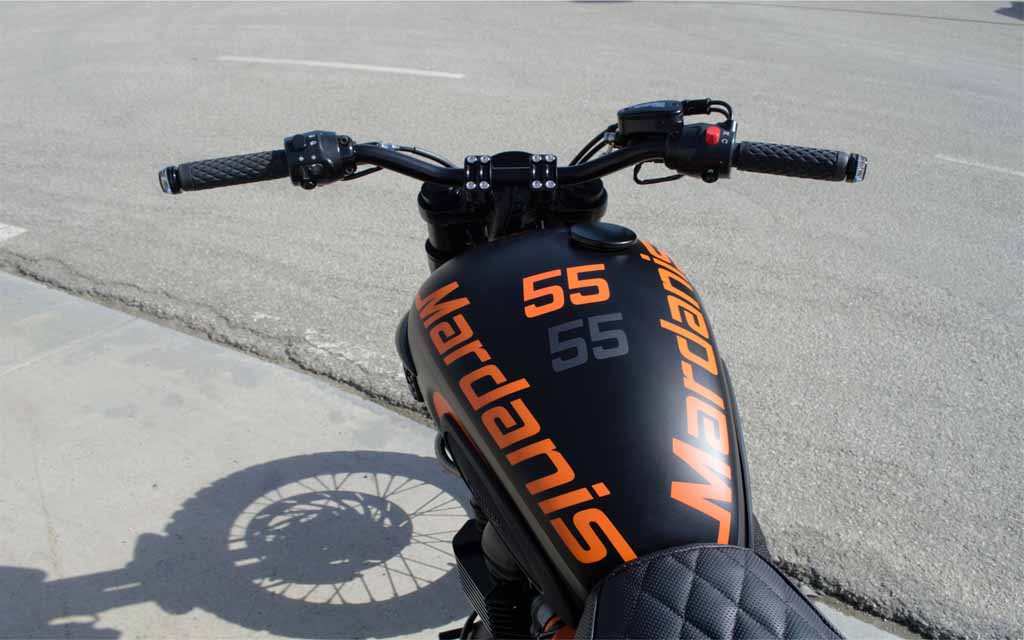 The modification and transformation of a Triumph Bonneville motorcycle in Scrambler or Cafe Racer style is something that Lord Drake Kustoms has been doing for more than a decade in his two workshops specialized in customizing Triumph motorcycles in Malaga and Miami (USA).

But this Triumph Bonneville T100 modified and converted into a scrambler motorcycle it isn’t a Triumph whatever… just in a “MARDANIS”. It is the third unit in a series of motorcycles dedicated to King Wolf Ibn Mardanis of Murcia (The first motorcycle in this series was a BMW R1200S and the second a Vespa)

The owner of this amazingr Triumph, this time didn´t want a cafe racer, he wanted a fun, light transformed motorcycle that he could use daily on streets, roads and lanes… hence the choice of a Triumph Bonneville T100, which is one of the favorite bikes to transform for Francisco Ali Manen (LDK’s owner).

As always, the owner of the Triumph Scrambler “MARDANIS” gave Fran Manen total freedom to carry out the work, to the point that he did not know a single detail of how the modified motorcycle was going to be until the day he saw it completely finished.

Many motorcycle customization workshops in Spain usually make Triumph cafe racer or scrambler motorcycles, following very common patterns, but this unit had to be different in everything.

Transforming the triumph bonneville into a “MARDANIS” SCRAMBLER

Starting from the front, the first thing was to remove the entire front of the bike to install an inverted fork accompanied by a handcrafted front fender, a new 19-inch spoke rim, a larger diameter brake disc and a Brembo brake caliper.

All of this was finished off with a Vrod-style headlight, Motogadget M-blaze disc turn signals, Motogadget Pro odometers, Roland Sands Design handlebar risers, and an enduro-style handlebar with shorter, adjustable levers.

At the rear, everything was removed, the subframe was trimmed and modified, a small rear fender with a Led pilot was made, a custom seat was made and a new license plate bracket with side catch.

To finish the modification and transformation of this Triumph motorcycle, Continental off road motorcycle tires were installed, new shock absorbers with air bottle, an orange chain and other details such as the crankcase cover, engine protectors, side covers, oil covers. carburettors, pinion covers and other endless details among which the impressive 2: 1 exhaust pipe stands out.

Regarding the paint, the colors and graphics were very easy to choose… well, like the other two custom bikes in the “MARDANIS” saga; it must have followed the same pattern: matte black and orange. The airbrushing of motorcycles in this saga consists of the word “mardanis” and the number “55” in orange and this time it has been made on the fuel tank accompanied by details in graphite gray and LDK graphics. Of course all the matte finish.

Due to the success of the modifications made to this transformed Triumph; Lord Drake Kustoms is going to make a limited series of 10 units, in which the only thing that will change will be the theme of colors and graphics.

For all details, visit www.lorddrakekustoms.com.