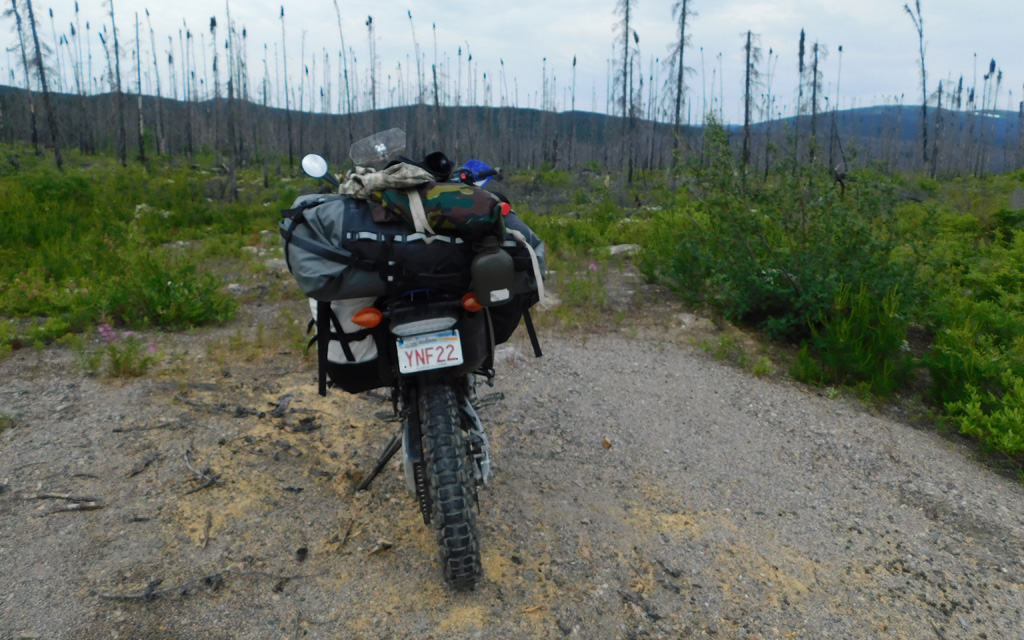 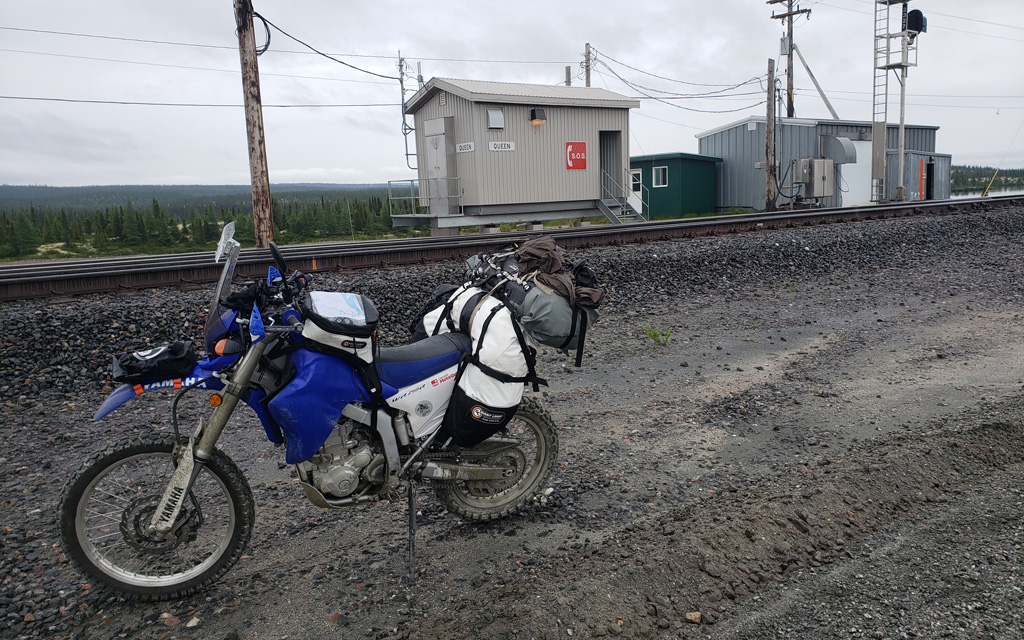 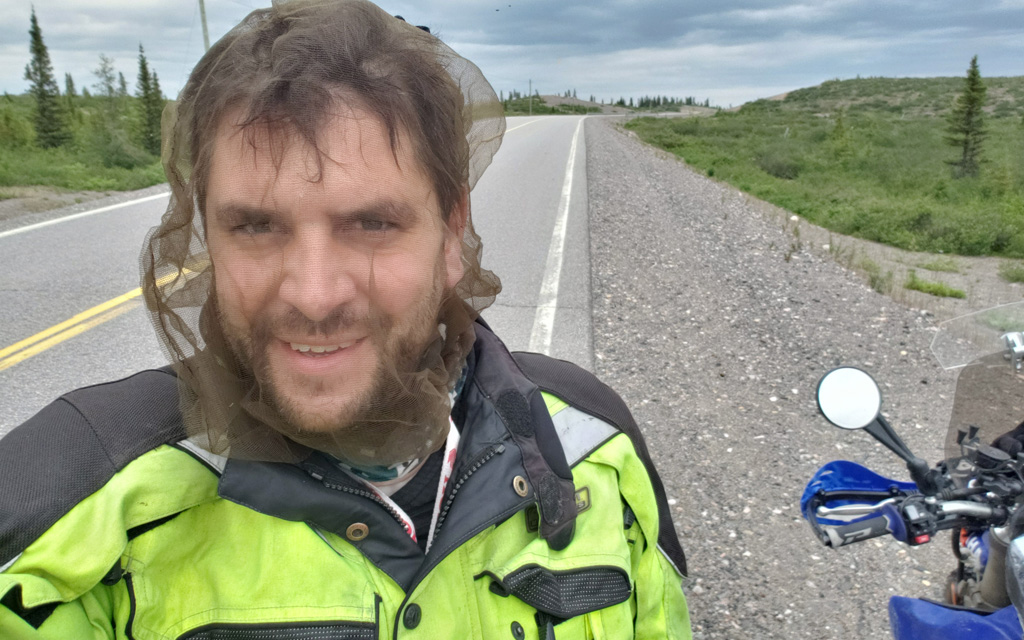 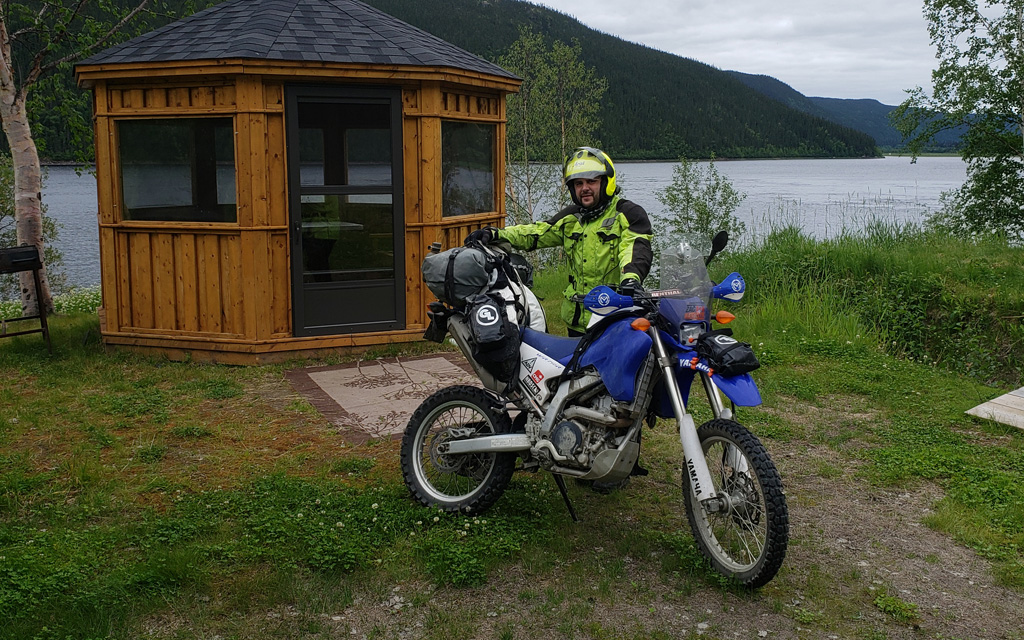 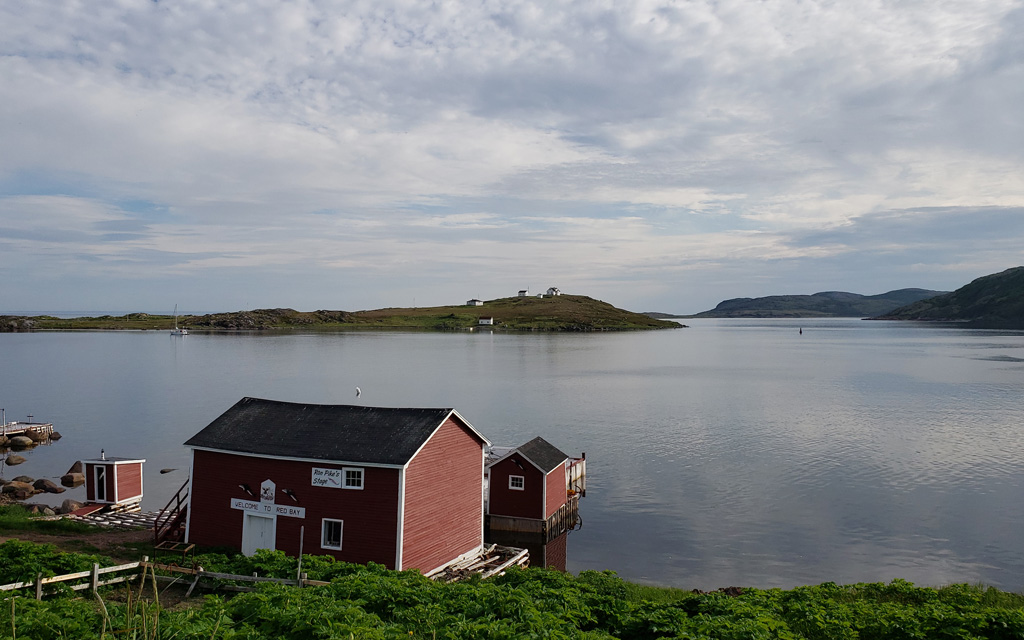 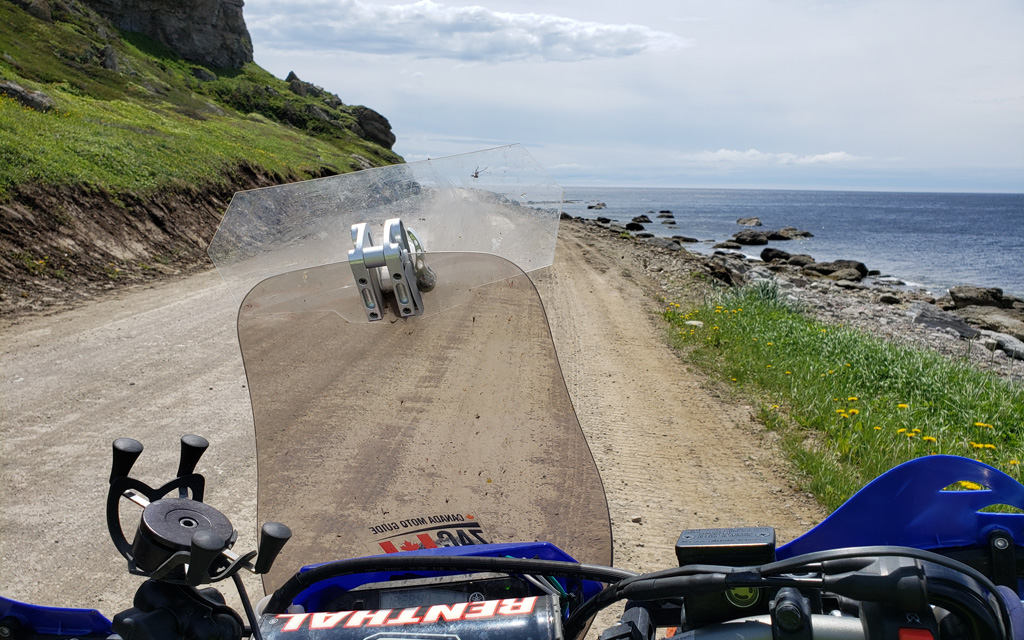 The morning broke cold and mean. I was camped in northern Quebec, in the ghost town of Gagnon. No buildings left standing when the mine company pulled out in the ‘80s. Just sidewalks, storm drains and a solitary flagpole. And me, and my Yamaha WR250R.

I’d rolled in the night before, when I spotted two camper vans from Ontario using the pull-out to spend the night. With no large trees around for my camping hammock, I’d pegged it out on the ground, like a tent, stringing the rainfly between the flagpole and my bike. Good thing, too. As morning broke, the clouds started to spit rain, then poured out a deluge. I wiggled out of my sleeping bag, and packed my luggage, best as I could, while lying under the tarp. I managed to pull my rain gear on while lying on my back, then scuttled sideways out from under the rainfly like a crab and strapped all my luggage down in the rain.

At least the mosquitos were gone.

The camper vans had pulled out early in the morning, even before the rain had woken me up. When I headed up the road to Labrador, I was all alone. There was nothing to see but a long road, bogs filled with scrubby trees, and low-lying fog. I felt nothing but the cold that took over my core, as rain soaked around the edges of my riding gear.

The next few hours would take me to the very end of Route 389, to the border of Labrador, and according to some who’d gone before me, this might be the toughest part of tackling the Trans-Labrador Highway adventure.

The road turned to gravel soon enough. The day before, the unpaved roads had been covered in a dry silt, a fine layer of fesh-fesh that collected in ruts to catch the unwary adventure rider. Now, that dust was turned into mud.

There had been no signs of civilization for mile after mile, but now, out of nowhere, the Fire Lake mining facility was in view. I thought about my cold hands and the rain seeping up my sleeves, and the company cook hall that was probably on-site, with hot coffee. I thought about a bunch of angry miners kicking me back out on the road, after angrily cursing me out in French for being dumb enough to ride a motorcycle to Labrador. I kicked the bike back into gear, and kept going.

For a while, the road followed the mine’s operations, with rail sidings close to the road and the occasional guard shack. Eventually, I was cold and miserable enough to try knocking on a door, to see if I’d find warmth or caffeine, but there was no answer. The only people around flew by in a pickup truck, towing a fishing boat. They were kind enough to stop, and warn me to be careful of the slippery roads. I was more worried about being crowded into the ditch by a fisherman in a hurry.

I actually found the gravel wasn’t anywhere near as slippery as the sand-like dust from the day before, and I was making fairly decent time. Eventually, I caught up with the most-dreaded obstacle of all on a Trans-Lab trip: the road grader.

Everybody I talked to had warned me about the graders in Quebec and Labrador, which travel down one side of the road and scrape the ruts and potholes, then turn around for the other side. Yeah, the grader did leave a big seam of soft, loose rock in the middle of the road, but it was nothing the WR250R couldn’t handle. I would have liked more horsepower on tap, but there were other major advantages to riding the lighter dual sport bike. With its good Dunlop tires, it easily handled obstacles that would have been pucker moments for a big-bore ADV machine with street-oriented rubber.

It was too bad about the weather; the rain had turned back into a cold, heavy fog, and even though the trees had disappeared and it seemed like beautiful country around me, I couldn’t enjoy it much. I was far happier to see the Fermont mine, rising from the swamps like a wilderness outpost in a Mad Max film. The buildings had that ramshackle post-apocalyptic look that takes over, once you’re in the middle of nowhere.

I knew the Labrador border was just ahead, and I could get coffee there, in Lab City. No need to stop at this mine. I did stop at the border sign, though. I’m not a big bucket-list kind of guy, but getting my picture with the Big Land sign was something I’d wanted to do for many years. I thought I’d never get the chance to, until my kids were grown up. Now, I was on the border of hypothermia, I was getting increasingly soggy in my rain gear—but I’d made it to Labrador.

Labrador City isn’t much to see, but it does have most of what a traveling motorcyclist needs in a pinch, including coffee and hamburgers. Most Instagram-oriented adventure riders wouldn’t be caught dead at a McDonalds while they’re traveling, but hey—with English, French and local indigenous languages all in use inside, I figured it was as good a multi-cultural experience as I’d get in the city. It was a good place to dry out and warm up, and while I was sitting there, clutching a cup of coffee, my camper van friends from the night before arrived. For the next few days, we’d bump into each other at stops along the way. That’s how it is, when there’s only one gas station for hundreds of kilometres.

The sun made a half-hearted attempt to come out as I left town. It wasn’t enough to really change my outlook on the day, but it did dry out my rainfly, strapped to the back of my bike.And at least the road was easy here, mostly smooth pavement.

For miles, I passed promising-looking rivers and ponds, and wondered where I should try my luck with my new Labrador fishing licence. The idea quickly lost its appeal when I stopped roadside to empty my bladder. A horde of insects descended on me as soon as I’d opened up my riding gear, with an unholy mixture of black flies, horseflies and even mosquitos joining in the attack. They were on me instantly, as soon as I cut the Yamaha’s engine, and I wriggled wildly inside my Alpinestars pants as I rode away, hoping to somehow kill the bugs that had managed to fly directly into my underwear as I zipped up my fly. So much for trout fishing!

Instead, I succumbed to white line fever, focusing on the road. Destination Churchill Falls, full speed ahead. Not that the WR could manage more than 100 km/h anyway, overloaded as it was. The lone RCMP officer I encountered couldn’t even be bothered to flash her lights at me, let alone pull me over for a ticket.

But even if the Yamaha wasn’t exactly fast, I was able to cover ground. I wasn’t stopping for anything now, and there was plenty of light in the day. I made it into Churchill Falls, and found an off-the-books campsite down by the river, complete with a gazebo. I assumed that would keep the mosquitos out (it didn’t). But there were locals camping there too, and they invited me in. Late night refreshments? Breakfast? Coffee? Some salmon, to eat along the way? There was nothing they wouldn’t do for me.

The next day was soggy again. I wasted the morning trying to catch a landlocked salmon, but had to give up and hit the road, off to Happy Valley-Goose Bay. Hundreds and hundreds of kilometres of un-challenging road, and rocks and trees and rain and mist. And black flies, if you pull off the highway.

This is what the Big Land has to offer, and if you’re OK with that, it’s a fine ride. The only stretch of the Trans Labrador Highway that isn’t paved is the section between Happy Valley-Goose Bay and Port Hope Simpson, and that’s shrinking every year (it was about 250 km long when I rode it in 2019; by 2021, it will probably be gone). The legendary slog through endless kilometres of gravel has been tamed.

You can still see lots of wilderness from the paved highway, and if you have time to get off the main road, you can get yourself lost and in danger in very short order. Unfortunately, on this trip, my schedule and the weather didn’t cooperate for those side trips. But I’d made it to Labrador, and survived it, and best of all, met the great people who live there. As soon as I get a chance, I’m going back.