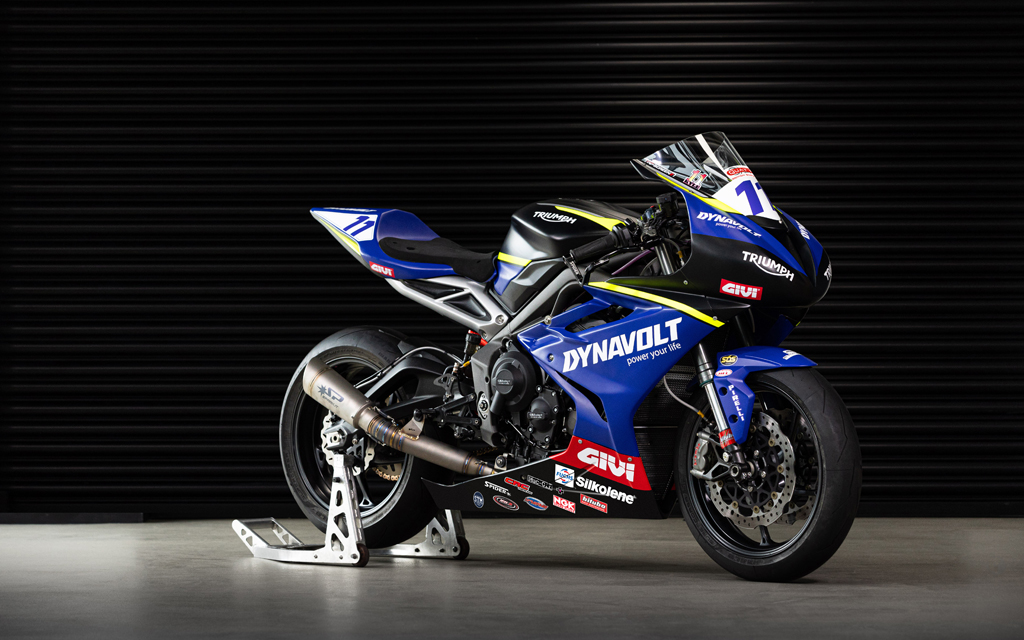 The unveiling of the new Triumph Street Triple 765 RS for the 2021 Quattro Group British Supersport season marks an important step in Triumph’s future racing ambitions. In partnership with PTR, racing as Dynavolt Triumph, the aim is to demonstrate the performance credentials of the 765 triple engine and Street Triple RS chassis in the most demanding environment of top-level competition.

Dynavolt Triumph, managed by Simon Buckmaster’s PTR team, is the ideal partnership for Triumph, with proven capability in Supersport race preparation, trackside operations and the ability to co-ordinate with Triumph’s in-house engineering department.

The basis of the Dynavolt Triumph 765 is the Street Triple RS, a bike that has had significant global sales success and which is appreciated for it’s class leading handling and exhilarating, torque rich engine. Following discussion with MSVR and Dorna WorldSBK Organisation (DWO), Triumph are committed to helping establish a new Supersport formula allowing a wider range of engine formats to compete on level terms, thereby offering great potential for exciting racing which can feedback into the development of bikes that people can see in their local showroom.

Steve Sargent, Triumph’s Chief Product Officer explained: “We were offered the opportunity of testing the formula for expanding the Championship and see this year very much as a year for a proving ground for us to make sure we have a competitive bike. The ambition is to go beyond this and next year go into World Supersport, part of a longer term racing strategy and this is a key part in terms of developing a more road based racing class; so building something that you can actually go into the showroom, buy and ride and then convert into a race bike. I think, for a manufacturer like Triumph, that’s quite important.” Steve Sargent, about the competitiveness of the Street Triple RS, also added “We wouldn’t go into this project if we didn’t think that this is a bike that could genuinely compete. The Street Triple is a naked sports bike but it’s derived from the Daytona so we think, in terms of geometry, this is a really good starting point for a race bike. I think, as a starting package, you’ve got a chassis that really works and engine wise, we’ve got the 765 Triple. It’s an engine that we’ve been using in Moto2 for the last couple of seasons and I think the response we have had and the performance we’ve had will tell you that the engine, as a package, is something that is going to compete. Combining the two things together, the engine and the chassis, I think we’ve got a really good starting point”.

Regarding the expectation for the 2021 season, Steve concluded “Myself and Simon (Buckmaster) have talked about expectations and obviously neither of us are in this to do anything other than be at the sharp end. I know Simon is very much focused that way and I believe that we have a package that can deliver that; I believe that we have two riders who can deliver that and from the Triumph side, we want to demonstrate what a Triumph can do on the racetrack”

Simon Buckmaster, Dynavolt Triumph’s Team Principal also commented “I have to say, on behalf of PTR and Dynavolt and Triumph, I am really very proud of this machine and I really cannot wait to get started. I feel confident and slightly nervous; it’s a brand new project but we have to aim at challenging to win. That has to be our goal for the season.”

Brandon Paasch, Dynavolt Triumph Factory Rider #96: “Visiting the Triumph factory was an awesome experience, it’s amazing to see how much time and effort they put into every detail. That’s something that gives a rider an extra bit of confidence. It was also great to finally get to meet up and chat with the team and see the Dynavolt Triumph race bike! I’ve been thinking of this moment for months now, so to finally see everything coming together was so exciting! I’m fully focused on getting testing here pretty soon, and I can’t thank Triumph enough for all the hospitality and support! I hope everyone else is as excited about this opportunity as I am!”

Kyle Smith, Dynavolt Triumph Factory Rider #11: “I am keen to get started in what will be a new challenge for me in a new championship with a new bike.  When I got the call from Simon it was a no-brainer.   I can’t wait to start testing at Silverstone to get our base set-up.  I have no doubt the new Triumph will be a good bike and having worked with the PTR crew in the past, I am confident we can be competitive”

The Dynavolt Triumph Street Triple 765 RS is scheduled to make its debut on track during the first official BSB Test, at Silverstone, 28 April 2021.