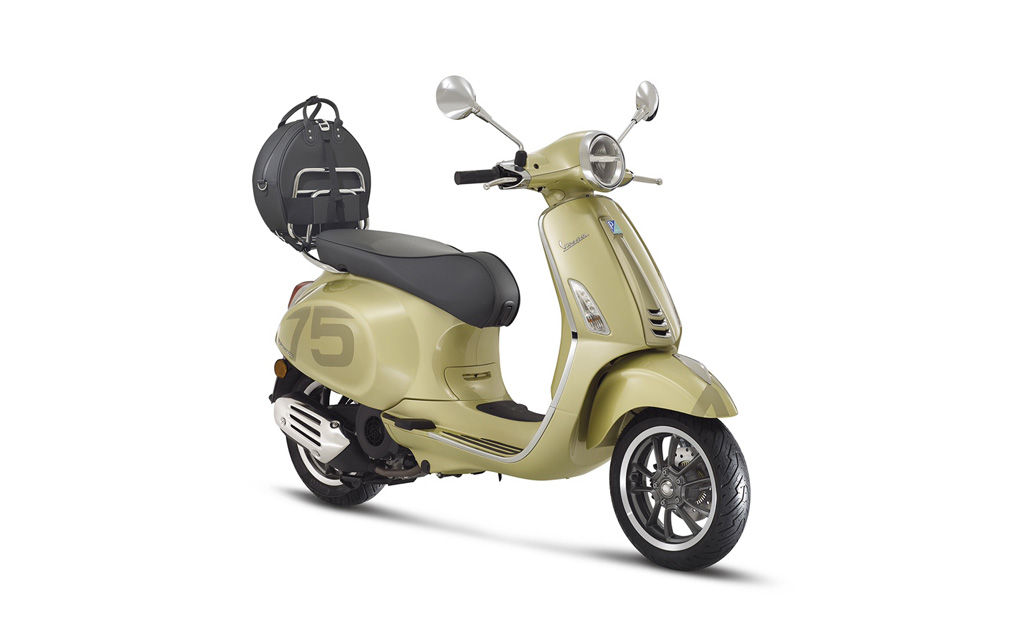 THE VESPA 75th WILL BE SOLD IN 2021 ONLY: A UNIQUE OFFER TO CELEBRATE A LEGEND THAT HAS ACCOMPANIED OUR CHANGING LIFESTYLE OVER 75 YEARS

AVAILABLE IN THE PRIMAVERA AND GTS MODELS, WITH STYLING SPECIFICALLY FOR THE ANNIVERSARY: AN EXCLUSIVE LIVERY, SPECIAL FINISHES, NEW SADDLE AND CHROME-PLATED LUGGAGE RACK FOR A BAG DESIGNED FOR THE SCOOTER

From 23 April 1946, the patent filing date, to 2021: seventy-five years of history during which the Vespa has taken the roads of the entire world up by a whole new gear. A period that has seen the Vespa lead new trends in social customs, music, youth culture, accompany the growth of countries and continents and become a timeless icon, a symbol of contemporary living, an example of Italian style and technology.

To celebrate the Vespa’s 75th anniversary as a true citizen of the world, a new special series, Vespa 75th, has been created for the Vespa Primavera (in 50 and 150cc models) and the Vespa GTS (300cc). It will be available in the US in May/June, and for 2021 only. A unique offer, which is also presented on the VESPA.COM website and the Vespa social media channels.

The Vespa 75th body, as always in all-steel, is presented in “Giallo 75th”, an original metallic yellow. Developed specifically for the new series as a contemporary interpretation of hues in vogue in the 1940s, the color evokes the heritage, innovative spirit and fashion-loving style of the Vespa. The side panels and front mudguard display the number 75 in a slightly stronger shade, creating a quietly elegant tone-on-tone effect, which is repeated on the front of the scooter, where the traditional “tie” is an opaque “Giallo Pirite” yellow.

The two-wheeler also features a special nubuck leather saddle with edge in Grigio Fumo grey, wheel rims painted in grey with a diamond finish and a host of chrome-plated details, including the “tie” ornaments, the badge on the front mudguard, the instrument cluster surround, the muffler cover, the rear-view mirrors and, on the GTS only, the foldaway passenger footpegs.

The rear luggage rack, another distinctive feature of the Vespa 75th, is also chrome-plated: it houses a round bag whose shape replicates the typical spare wheel holder. Made from soft nubuck leather in the same color as the saddle, the bag has a shoulder strap for easy carrying, and clips on the luggage rack with a quick-release mechanism. It comes with a waterproof cover. Like all Vespa special editions, the series is identified with a plate behind the leg shield.

In technology terms, the Vespa 75th represents the top of the Vespa range: the models of this anniversary version (with 150cc/300cc engine) are equipped with a 4.3” TFT color display, while the fully digital instrument cluster makes the best possible use of the capabilities of the Vespa MIA smartphone connectivity system.

In addition to all this, to mark the exclusivity of this special celebratory series, each Vespa 75th comes with a Welcome Kit including an elegant Italian jacquard-silk scarf with handsewn hems, a vintage steel Vespa plate, a personal Owner’s Book and eight collector postcards with images from the eight decades of the Vespa story.

In 75 years of history (Piaggio registered its patent on 23 April 1946) and nearly 19 million vehicles on the road in five continents, Vespa has given the entire world a new gear, spreading as it has across the world’s roads, uniting youngsters from very differing and distant cultures in a unique passion. The first truly global mobility brand, Vespa has become a common thread between generations, used by all different groups in society, creating various cultural phenomena particular to the different settings in which it has found itself, to the point of becoming a protagonist and a distinctive trait. It has steered habits, music and youth, and has accompanied countries and continents as they have grown, racing alongside them in times of economic boom.

Now, as it celebrates this wonderful milestone, Vespa is experiencing one of the happiest moments of its long life.

In the last decade, more than 1,800,000 new Vespa vehicles have been produced and taken out on roads all over the world.

Today, Vespa is a more global brand than ever before, a real citizen of the world, produced at three production sites: Pontedera, the plant where Vespas have been built uninterruptedly since 1946 with production destined for Europe and Western markets, the Americas included; Vinh Phuc, in Vietnam, which serves the local market and the Far East; and India, at the ultra-modern Baramati factory, opened in April 2012 to manufacture Vespas for the Indian market.

Availability USA: Arrival in May