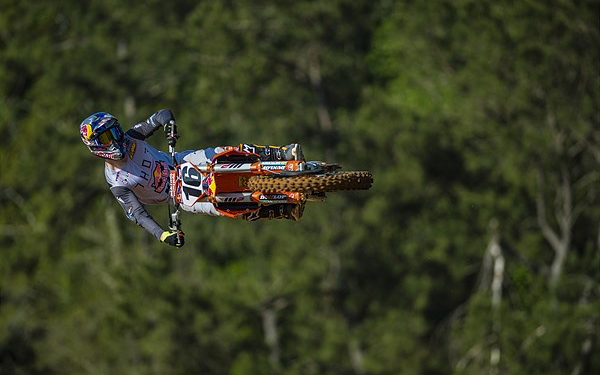 Coming off a championship-winning start to the 2020 Triple Crown Series, the KTM Red Bull THOR Factory Race Team now looks to the remainder of the year with the upcoming kickoff of the SX Tour, set to get underway this Friday and Saturday at Gopher Dunes.

Coming off a championship-winning start to the 2020 Triple Crown Series, the KTM Red Bull THOR Factory Race Team now looks to the remainder of the year with the upcoming kickoff of the SX Tour, set to get underway this Friday and Saturday at Gopher Dunes. The team is pleased to announce that 450 rider Cole Thompson will return to racing in the premier division this weekend following a one-month hiatus due to ongoing health issues. Unfortunately, Thompson will not be joined by his teammate, and recently-crowned 250 Pro Champion, Jess Pettis, who will undergo surgery this week to repair an ongoing knee injury that he reaggravated during Round 2 of the MX Tour.

For Thompson, this weekend marks the first time he will line up since Round 2 after struggling with ongoing health issues attributed to the Epstein Barr virus throughout the summer. After taking some time off of racing, the 2018 450 Pro Triple Crown Champion is feeling much stronger and READY TO RACE this weekend aboard his KTM 450 SX-F FACTORY EDITION.

Pettis, who finished the season consistently on the podium with four of the five overalls and 11 moto-wins, put forth a dominant performance despite racing most of the MX Tour with a torn ACL. In Round 2, Pettis aggravated his knee during the first moto at Walton when he put his foot down in a muddy corner and immediately felt a pop and pain in his knee. Pettis successfully finished out the MX Tour where he will now undergo knee surgery this week to immediately begin the recovery process in hopes of returning to racing quickly.

Jean-Sebastien Roy, KTM Red Bull Thor Factory Team Manager: “It was a tough decision for Jess and the team to not continue racing in the SX part of the season but we made the decision to get the knee repaired so he can be fully ready to race. Regardless of that, he will for sure begin preparation for the 2021 season on 450s. In positive news, we are excited to have Cole healthy and back at the races with the team. He has been training quite a bit at his own SX track in Ontario and we have high hopes that he will be competitive in the 450 class.”

Cole Thompson, KTM Red Bull Thor Factory 450 Rider: “I’m very happy to be back on the bike and healthy to race the SX Tour. I was diagnosed with Epstein Barr virus this summer and had to sit out the MX Tour to get my health back in shape. After being off the bike for a month, I’m finally able to feel like myself again and have been working hard to get ready to race for this upcoming weekend. I can’t thank my team enough for being behind me during these tough times and I’m thankful to get back to racing and battling for wins again!”

Jess Pettis, KTM Red Bull Thor Factory 250 Rider: “The week after Walton, I went to Toronto for an MRI and found out that I tore my ACL again. It wasn’t the news I wanted to hear after the long winter of rehab and hard work that I put into recovering my injured knee from last September but I kept my head down and spent the last weeks rehabbing my knee and fighting my way through the MX Tour. I was still able to keep my momentum going and get many more wins, and the MX2 Championship, which was an amazing feeling considering what I went through with my knee over the summer. With that being said, I’m going to miss the SX Tour to rehab my knee, get the swelling down and really focus the next few months on getting the strength in my knee and preparing for some big things. I want to wish good luck to my teammate Cole this weekend and thank all the KTM crew for being behind me through the ups and downs, we’ll be back stronger than ever.”

Thompson and the KTM Red Bull THOR Factory Race Team will head to Gopher Dunes this weekend, September 18 and 19, for the first two rounds of the SX Tour.