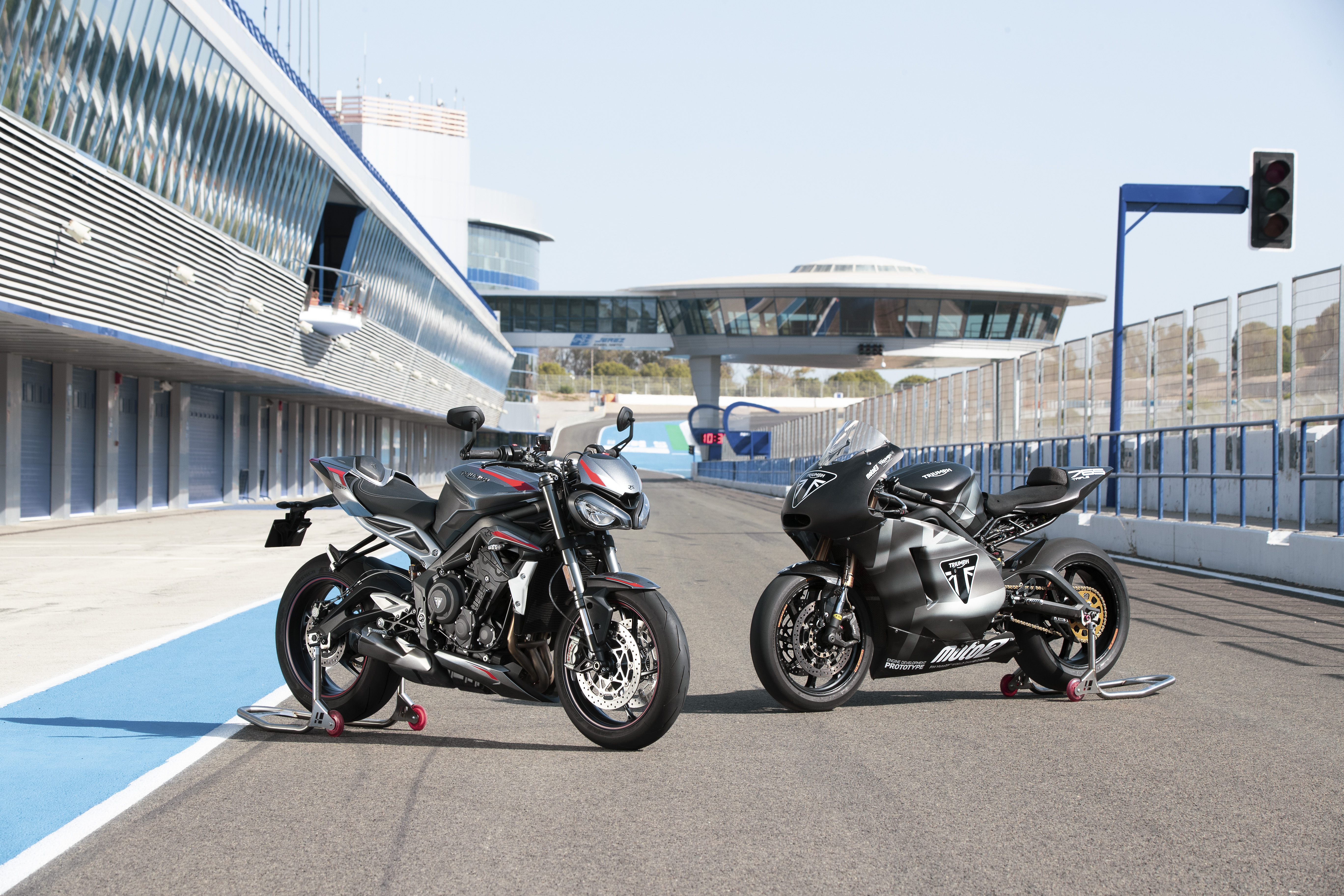 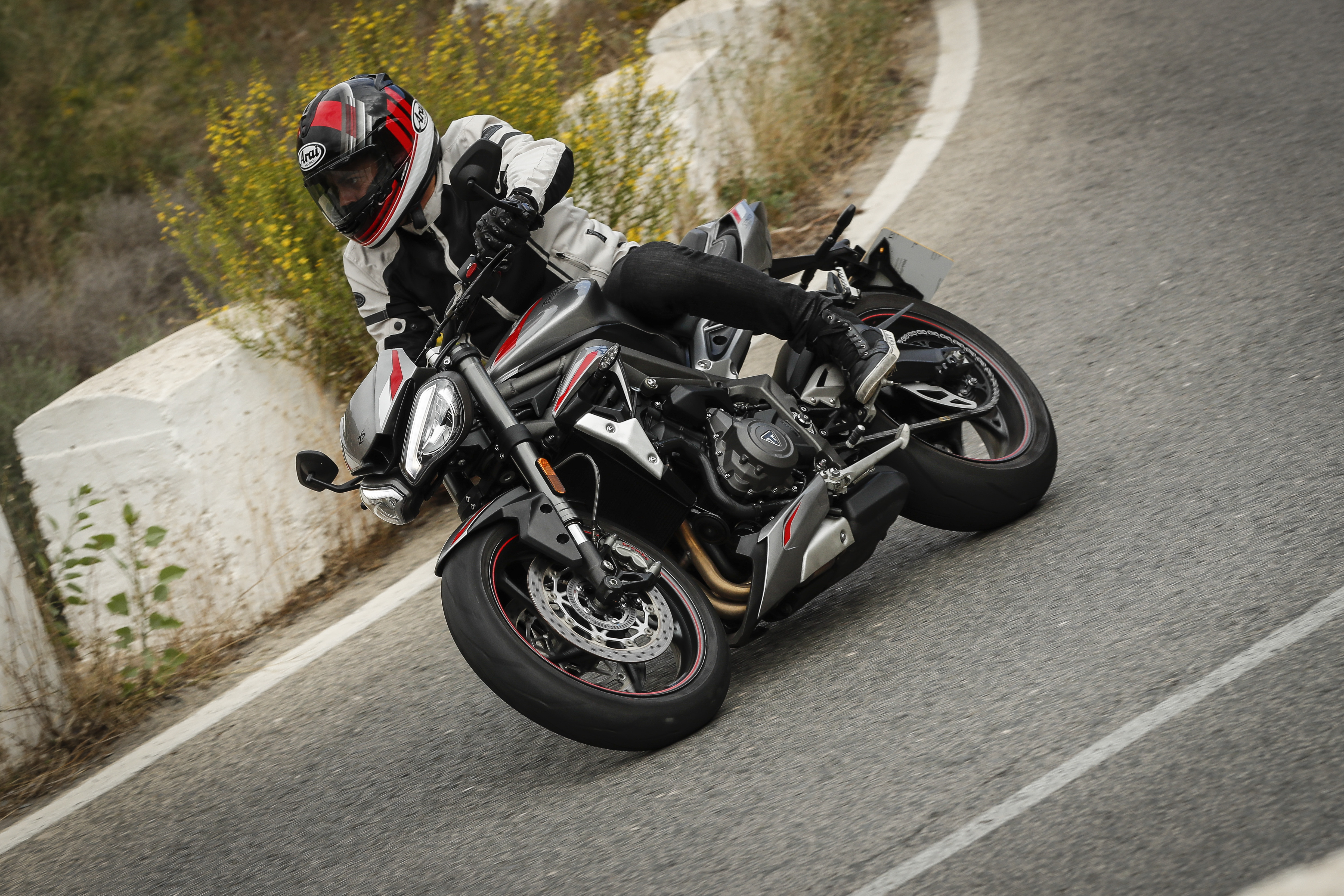 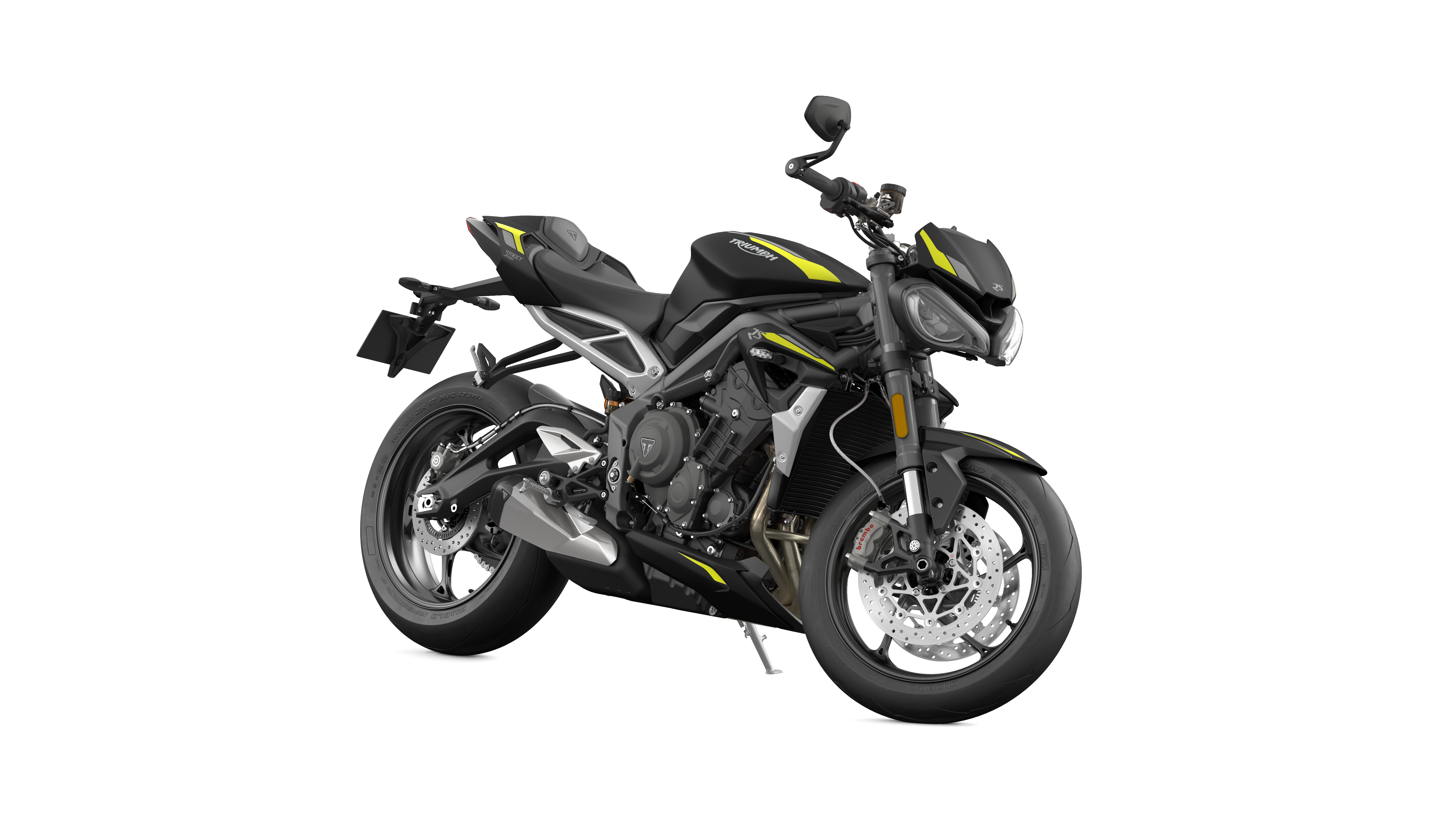 2020 Triumph Street Triple : A gem of a middleweight

Here I am, following an Italian journalist clearly accustomed to being on the gas through twisty European mountain roads as he crosses over the line into opposing traffic lanes with confidence. Rock faces on one side, deep drops on the other, cars sparsely placed throughout and, when there is a moment to spare, some beautiful scenery. As any truly eternal child might, I give ’er as current safety constraints are reset, the engine roars more readily between blips higher in the rpm range, and a simultaneous sense of ease and deep inner grins set in.

We are near the port town of Cartagena in Spain on the morning of a warm yet cloudy fall day, mostly inland with the occasional coastal palm tree view, riding Triumph’s 2020 updated Street Triple. A fully decked out naked bike with trick street-based Öhlins shock in the rear and both Showa forks and Brembo brakes up front—components often found on full-sized sport bikes with higher price tags. Real eye-candy, with high attention to detail everywhere I look.

The TFT display provides intuitive electronic adjustments for power delivery, ABS, and traction control, all of which are now set to street mode. I find it a bit stiff at a slower pace through small villages, and so would soften the physical suspension adjustment ranges if a daily ride. Vibration through the bars is notable, but compartment syndrome in both my forearms is likely to blame. The updated mirrors provide an excellent view of things behind, and the wide stance between grips provides good leverage for tossing the bike from side-to-side with relative ease.

Seating position is comfortable until about 135 km/h, with my head and upper body fully exposed to the elements with maybe just a peripheral view of the front wheel. My perforated Altimate riding jacket provides a welcome breeze—any faster, and I am in fighter mode with arms out and rigid as wind pressure steadily increases with higher speed and unique mid-tone engine growl. Downshift with varying intensity while noting crisp, smooth, unassisted throttle blips, and eventually engage the clutch to stop. Lever action is so light I still frequently slip the clutch too much when starting off. 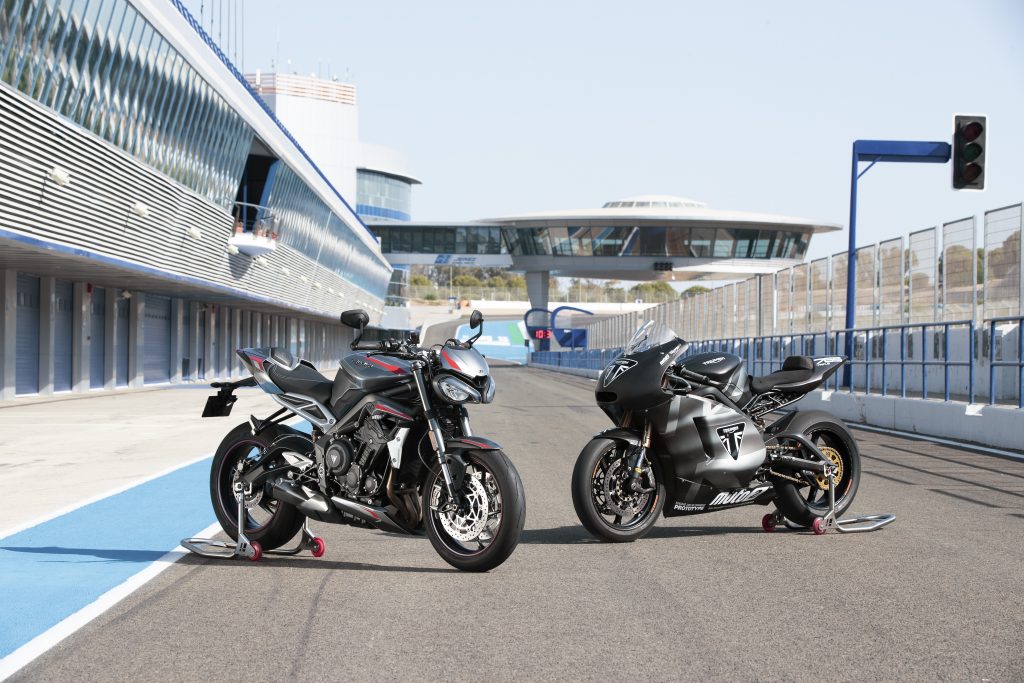 We arrive at Circuito Cartegana for lunch and what turns out to be most of the day, but end up with just three 15-minute sessions to learn the track and wring the little bike’s neck. I have always been one to start slow to go fast—it hurts less and generally delivers better results, but this track’s flow feels off to me. Only by the third and final session do I start finding the groove and pull away. That is until the final few laps when I find a false neutral and/or it pops out of second gear under load for the third time. It did it first while on the street and I had thought nothing of it then, but it threw me off my game now.

Whatever. It may have been just me spoiled with the power shifter and not applying enough gear lever pressure. I do know that the Street Triple felt like a true middleweight supersport minus a windscreen. The Pirelli dual compound rear and single compound front Diablo Supercorsa SP3 V3 tires provided excellent grip and feedback regardless of environment. So much so that the Dianese leathers borrowed from Rider’s Choice remain unscathed, but now need replacement knee sliders.

What the Street Triple may lose in a marginally longer wheelbase to a full-on sport bike it gains in a wider-stance and higher handlebar, much like supersport entries of not very long ago. And it all comes within a very modern and comparatively comfortable package. I can see Triumph’s Street Fighter as my daily commuter with occasional weekend track day duties. The number of open sportbikes to be had for a snack would surely bring smiles, all on a bike I can take my wife and kids out on as well. A true gem. 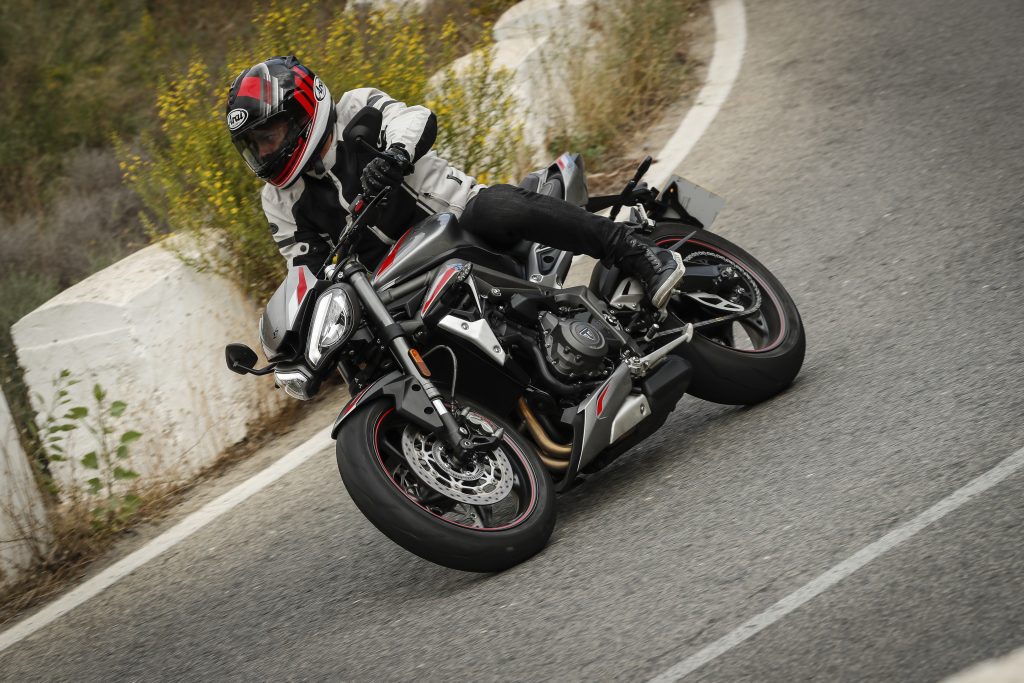 Triumph commenced supplying 765 cc triple cylinder engines to all brands competing in MotoGP’s spec series Moto2 class in 2019. Being amongst the world’s highest levels of road racing, this 2020 model clearly benefits from the R&D. With more than 70,000 Street Triple units sold worldwide, it is a uniquely important member of the family.

Engine modifications include a revised intake track and exhaust cams, plus machining upgrades to the crankshaft, balancer and clutch. The gearbox has also been upgraded with a power-shifter that now comes stock and is actuated based on drum rather than gear lever position for allegedly more precise and seamless lever-actuation—the automated throttle blips are practically perfect harmony regardless of whether going up or down in the gearbox.

Exhaust fumes escape through a higher flowing and now carbon tipped exhaust cannister thanks to a double catalyst system. Take a look underneath towards the back on any full lean left side shot to see how well-hidden it is (not the cannister side). And to help slow things down rather than speed them up, Brembo’s MCS ratio and span adjustable master cylinder is mounted up front, so I can now modulate how progressively braking force is applied through the lever, as well as how far it is from the bar.

The TFT dashboard angle can now be adjusted, and has upgrades to both the graphics and rider modes to complement the engine upgrades, all of which can be accessed through revised controls while riding. Pretty easy to use even for those of us who need glasses, although a more prominent tach view would have helped. But due to new regulations, ABS can apparently no longer be turned off. A free new “MyTriumph” app can also be utilized provided you purchase the Bluetooth module to connect with smartphones for access to music and map directions, plus a GoPro while riding.

Every piece of the bodywork is revised yet remains in tune with family values, with its most distinctive new feature being the brighter, accentuated twin LED headlights which look to me like angry robot eyebrows more than anything else. Love them or hate them, your call. Passenger seat height has been raised for comfort, and comes with a solo-seat cover for the sportier look mostly displayed here.

Fit and finish is very good and has more focus placed on making it monochrome with titanium colour to better match its bigger more throaty sibling, the Speed Triple. And the range of accessories available to personalize the bike is extensive. Seems too good to be true, but its list price of $14,050 remains unchanged, in spite of all the investment to improve performance and style.

Do you think Triumph wants to increase its market share? 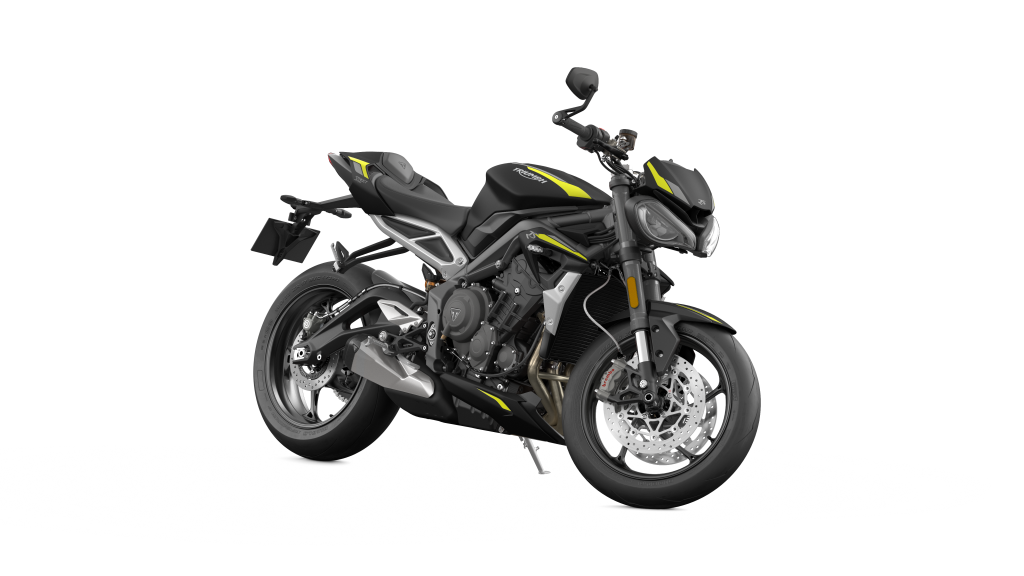 The group stops at a nice bar overlooking the waterfront for a break during the morning street ride, where senior head office Triumph marketing and R&D team members engage with the invited media. Triumph is part of a family business in the UK with no external investors; the family also owns a similarly sized national home building business. The owner is still actively involved, and has one son acting as CEO of Triumph and his other son as CEO of the other. A board of directors overseas Triumph, and I am told the culture remains that of a family business, in spite of having over 2,000 employees worldwide.

R&D is all done in the UK. Once ready for production, a global supply chain combined with manufacturing plants located worldwide is leveraged, with only minor things like machining the crank left back home. All plants are built to UK specs, and local post-secondary institutions are solicited for bright new recruits. Apparently, one would not be able to tell the difference between plants if given tours, as the attention to detail and processes are consistent between them. This might be more of an asset for Triumph than most, given Brexit and its impact on businesses across England.

With a deeply rooted history as an industry icon that fell to become a national embarrassment, Triumph has regained a form of national pride as a result of growing global success and increased market share in a shrinking industry. The first decade under the current regime was spent addressing quality issues, and all profits are still re-invested. Only recently has focus been increased on marketing and sales initiatives to better tell its story and engage with customers, all while the business’s value increases substantially, and we keep getting cooler bikes.

One thought on “2020 Triumph Street Triple : A gem of a middleweight”