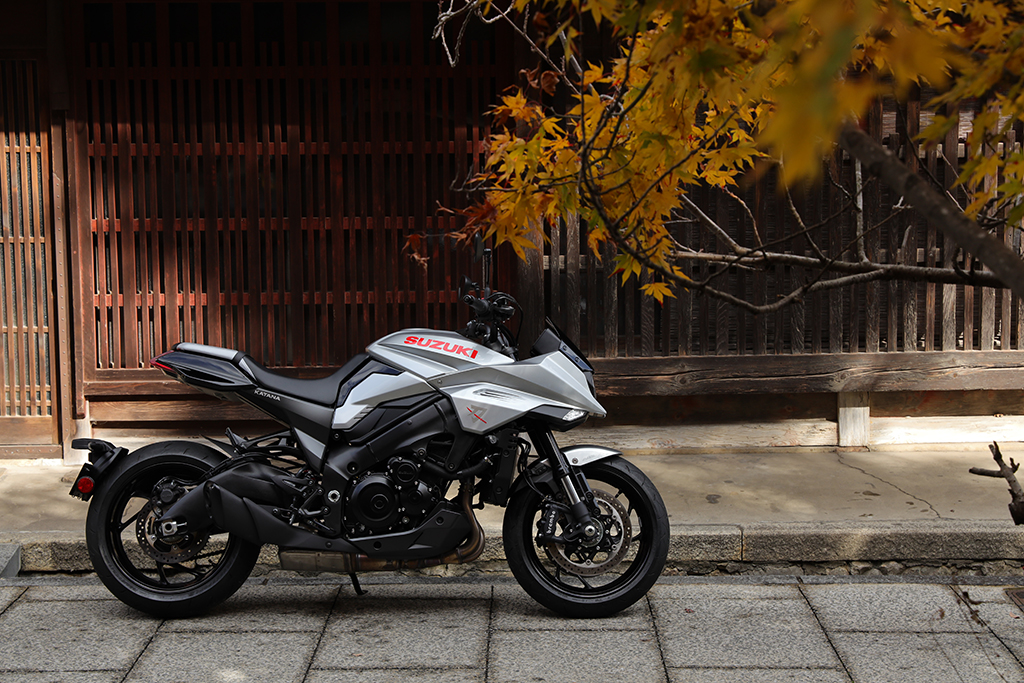 SUZUKI SWORD IS SHARP BUT CIVILIZED

Spring in Japan is cherry blossom season. The pink flowering trees are everywhere, and in bloom they are a stunning sight and a major tourist attraction. We weren’t in Japan to see flowers, though, and anyway we were a couple of weeks early for the big pink. We three Canadians—Suzuki PR rep Marcus Martellacci, journalist Bertrand Gahel, and me—were on the island of Honshu in March to ride the new Katana, a 1,000 cc naked bike that is meant to take advantage of several things: horsepower gains of the past few decades, a tendency for motorcyclists to thrive on nostalgia, and the mythic stance of a jewel-like curved sword that samurai warriors carried back when they had an authority of life or death over mortals.

And when, after a few days spent touring around Honshu and the cities of Hamamatsu and Kyoto, we were finally able to mount the atavistic Suzuki Katana, we weren’t treated to a slamdance around public streets with a Suzuki guide heading the pack. We were given a forested mountain, a 10-kilometre closed-off section of highway, and about two dozen motorcycles with licence plates that said, only, “SUZUKI.” Two dozen Katanas because there were about that many foreign journalists in attendance. We were flown first class, taken for tours of the Suzuki Historical Museum and a factory in Hamamatsu (where I saw a worker fitting the rear wheel and swingarm to a partly-assembled Hyabusa), the Nijō Castle in Kyoto, and a sword forge, where a master swordsmith who looked too young and comfortable to be making killer swords allowed us to lay hands on a katana—sword, that is—that he had hammered, forged, polished, and sharpened, taking a brick of steel from raw material to glistening, if potentially deadly, art. It was all lovely and even, at times, breathtaking, but we were there to ride, and so we did. 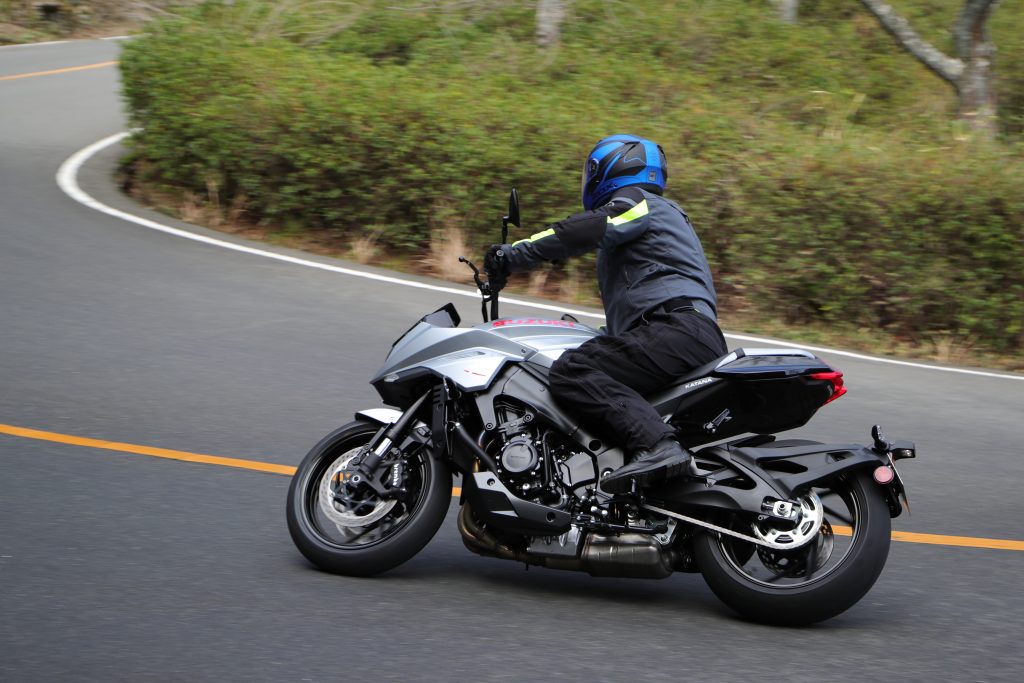 And when it was all done, I asked myself a question: Why did they bother?

Don’t get me wrong. There’s so little to be faulted in the new Katana motorcycle that you have to look for problems; they don’t just appear for you. The engine, a liquid-cooled four of 999 cc displacement and a claimed 110 kW at 10,000 rpm and 108 Nm of torque at 9,500 (that’s 147 hp and 80 ft-lb of torque) was lifted from the 2005–2008 GSX-R1000 K5 and is a supplier of “tenacious torque at low revs,” as we were told. It’s the engine that the GSX-S1000 uses, and it’s exuberantly strong, linear in output, and smooth, with a nice snarl at the tail. The engine is housed in the light alloy frame of the GSX-S, and the swingarm was lifted from the 2016 GSX-R1000—it’s modern and efficient, in other words. Suspension is by fully adjustable 43 mm inverted Kayaba fork and single rear shock adjustable for spring preload and rebound damping. There’s nothing to say about the bouncy parts except that they bounce properly. Front brakes are four-piston radially mounted calipers by Brembo with 310 mm discs; rear is a single-piston unit by Nissin and both are equipped with Bosch ABS. You want to stop, you stop. Wheels are light alloy with Dunlop Roadsport tires in standard sizes. It’s got six gears, EFI with 44 mm throttle bodies and dual throttle valves, traction control with three modes as well as off, the first mode being closest to off while mode 3 would be used in rain and slippy conditions. Lighting is LED.

That’s all good stuff, and in general could be said of any number of modern four-cylinder semi-sports with naked ambition and good self-control. It’s not where the Katana resembles its 38-year-old predecessor that it shines; it’s where the new Katana differs from the old Katana that it becomes a motorcycle that you could live with. First, of course, it’s got a trunk full of horsepower. Not very long ago a motorcycle with nearly 150 hp at the crank dined with the gods. Think early Hayabusa and R1. Top flight sporting motorcycles today come closer to 200 than 150 hp, at least at high rpm levels, but 20 years ago 150 hp made journalists wet their tight little leather trousers. The original Katana, with a tube frame, air-cooled 1100 cc engine, and about 100 hp, made waves in the early ’80s, but performance is always relative. Today’s version is 50 percent more powerful. It’s also much more comfortable. Today’s Katana has lower footpegs, a shorter fuel tank (and shorter reach to the handlebar, which itself is higher), and a tapered seat that’s 825 mm from the ground, making getting your boot soles onto the pavement easier. Those elements make the 2019 Katana a much nicer motorcycle to sit on than the original model.
The new model also has better suspension (the original had a 35 mm fork with antidive, which is like attaching a fork to a pair of rubber chopsticks) and much better brakes than the original; it also has TC and ABS electronic rider-safety aids, and electronic fuel injection. (I asked at the press conference why there were no other electronic aids, such as engine power modes or tilt-a-whirl ABS, and was told the Katana is not that kind of motorcycle.) In keeping with that long reach to the handlebar, the original Katana was long, with a 1,520 mm wheelbase, a rake of 29°50’, and 118 mm of trail. The new model has a wheelbase of 1,460 mm, a 25° rake and just 100 mm of trail. At 215 kg wet, it’s also reported to be 30 kg lighter than the curbside 1981 Katana. None of that is markedly superior to what other motorcycles of its ilk can offer the rider, or a reason to buy a new Katana. But all of it contributes to what might become a very good motorcycle on your garage floor, if you buy into the mystique.

And here’s what I thought after several rides up and down the Arashiyama-Takao Parkway just outside of Kyoto (you can see it on Google Maps, though I couldn’t tell you precisely which curves we experienced—let’s just say the best ones). The following is quoted from a little blue NockCo notebook.

—It’s a quite fast group and a very twisty road. There’s a bit of snatch rolling on in second gear from off-throttle, and it stands up a little on braking in a turn. The seat feels good, flat and firm, and it doesn’t push my groin into the tank. There’s a great throaty sound and good linear power. It’s quick steering without much effort, but seems to need continued pressure on the bar in turns. Pegs and bar feel right. Don’t notice the bend in my knees (always good). Seat height is a little tall for me, (but I’m a little short for it).—

That’s it for my road notes. But standing off to the side while people fiddled with their phones and tried to steal ideas from other journalists, I noticed that the word SUZUKI on the fuel tank is angled in line with the nose plastic, making it look in one way similar to the original. Of course, designers went to some consider efforts to make the new Katana resemble, superficially, the old, and it’s where that family resemblance can be seen that the new bike will seem unique in a playground full of approximately identical tough guys like the Kawasaki Z1000R, the Yamaha MT-10, and Honda’s CBR1000R.

The design of the new Katana has been called a “throwback to the original,” and that’s evident in the shape of the tank, which chief motorcycle engineer Satoru Terada says “seems to be cut with a sword.” The new model was born out of a vision from Italian designer Rodolfo Frascoli, who presented a concept bike at the Intermot Motorcycle Show in Milan in November 2017. Suzuki designers took that concept and modified parts of it—the fuel tank and the headlight, for example, look more like the original Katana than Frascoli’s design had them, and the handlebar was raised and moved back to slide the centre of balance farther back than the Frascoli concept had it. The result is a motorcycle that, in the angularity of the tank and its integration with the side fairings, strongly resembles the original Katana, which was created and even named by the German designer Hans Muth and was first ridden on public roads in 1981. Muth said that when he presented his design to Suzuki personnel, company president (at the time) Osamu Suzuki said he was reminded of the supersonic Concorde, and later asked Muth why he chose the name “Katana.” 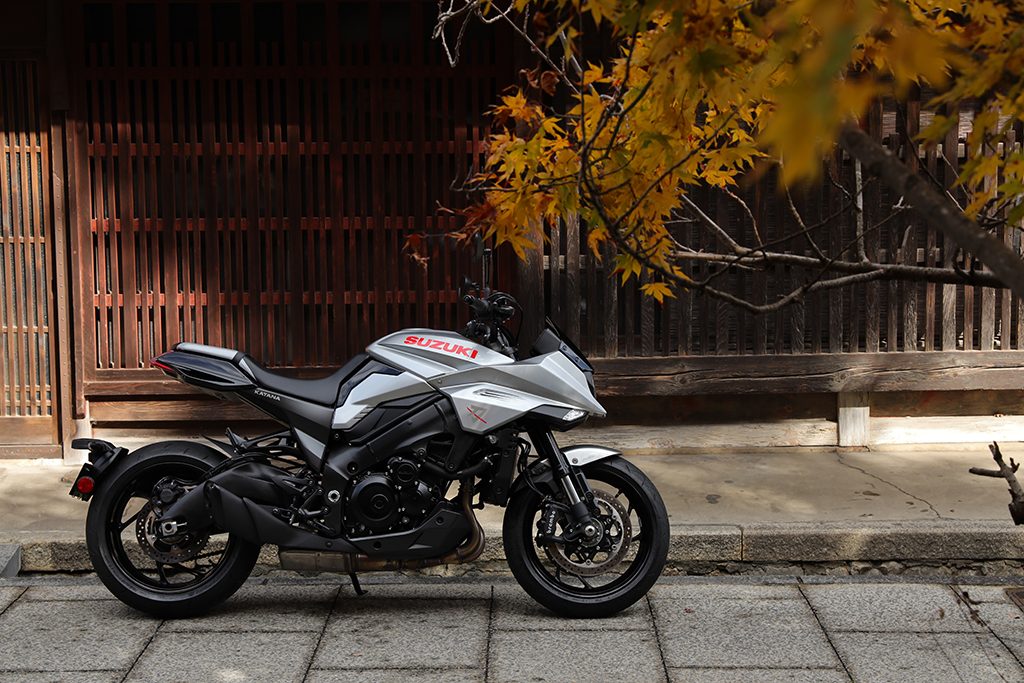 Muth told him that he’d been thinking about samurai and their sword, the katana, which became a symbol for him in his development of the motorcycle’s forms.

That Katana, which appeared in an era of UJMs (let me Google that for you—oh, never mind; do it yourself) that could hardly be told apart even with tank badges spelling out Honda, Kawasaki, Suzuki, and Yamaha, was a startlingly different motorcycle. Most of them didn’t have plastic, and the Katana’s was as daring a design as the miniskirt was in the 1960s. Honda’s vaunted 750 Interceptor appeared around that time (a couple of years later, but of the same generation) and was, technically, a superior motorcycle, except for a problem with melting cams. Its fairing, V-4 engine, and power and handling characteristics were advanced beyond the dreams of other motorcycle makers. But it was lame, in a visual sense, compared to the Katana. It was still enough to make you look twice, of course, at the time, but in motorcycle porn terms, the Honda 750 Interceptor was Playboy. The Katana was Hustler. You could smell the difference before you even got inside the motorcycle store.

At the final dinner in Kyoto, the head of marketing for the motorcycle group told us that about 5,000 Katanas would likely be built in the first year and would be aimed at Canada, the U.S., Europe, Japan, and Oceana. It turns out that, according to Marcus Martellacci, the first of them will be seen in Canadian showrooms around the end of November, as 2020 models.

How well they sell here could have nothing to do with nostalgia for their predecessor and those hot times in the early ’80s and everything to do with price, the buying public’s fancy, and insurance rates. The 2020 Katana 1000 certainly offers performance and comfort to match other sporty standards, but it does not punch above its weight limit. It looks good whether you judge it as a descendant or an original on its own, and the 2020 Katana does punch at its weight limit—so it’s got an even chance of winning the sales wars. And if buyers attracted by its performance, handling, comfort, and looks are also afflicted with nostalgia for the good old days of motorcycles, it just might prove to be the edge that Suzuki sales people want it to be and that its namesake certainly was.