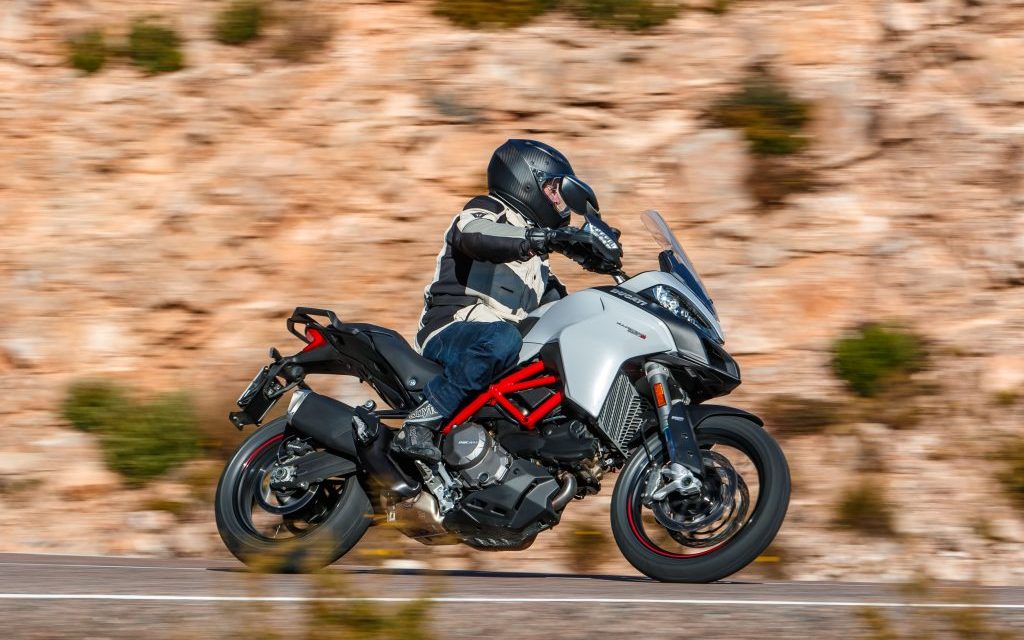 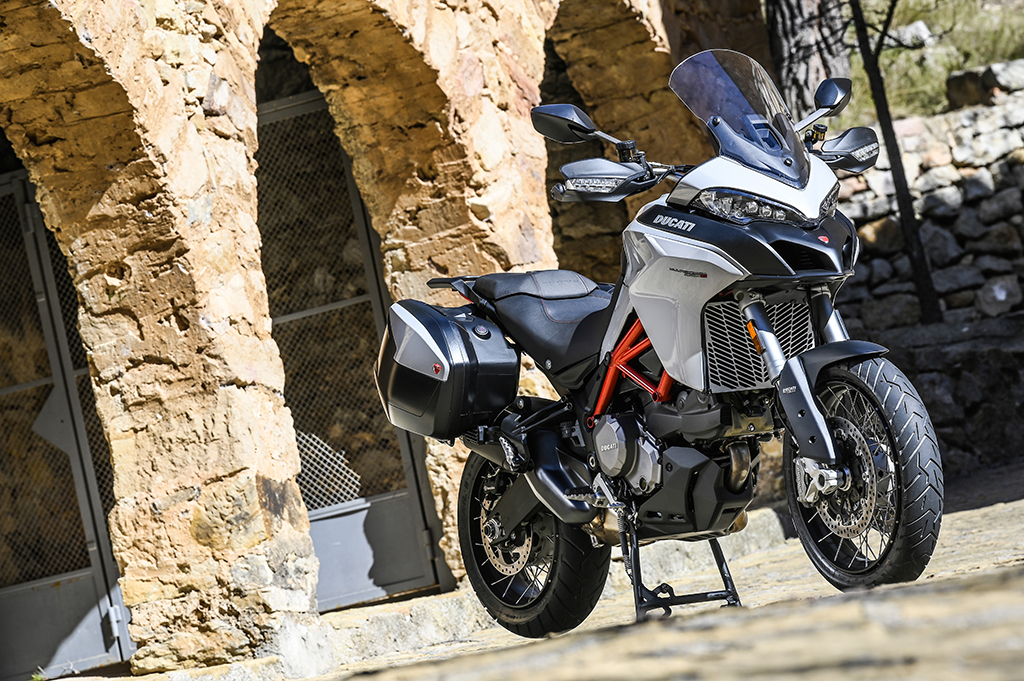 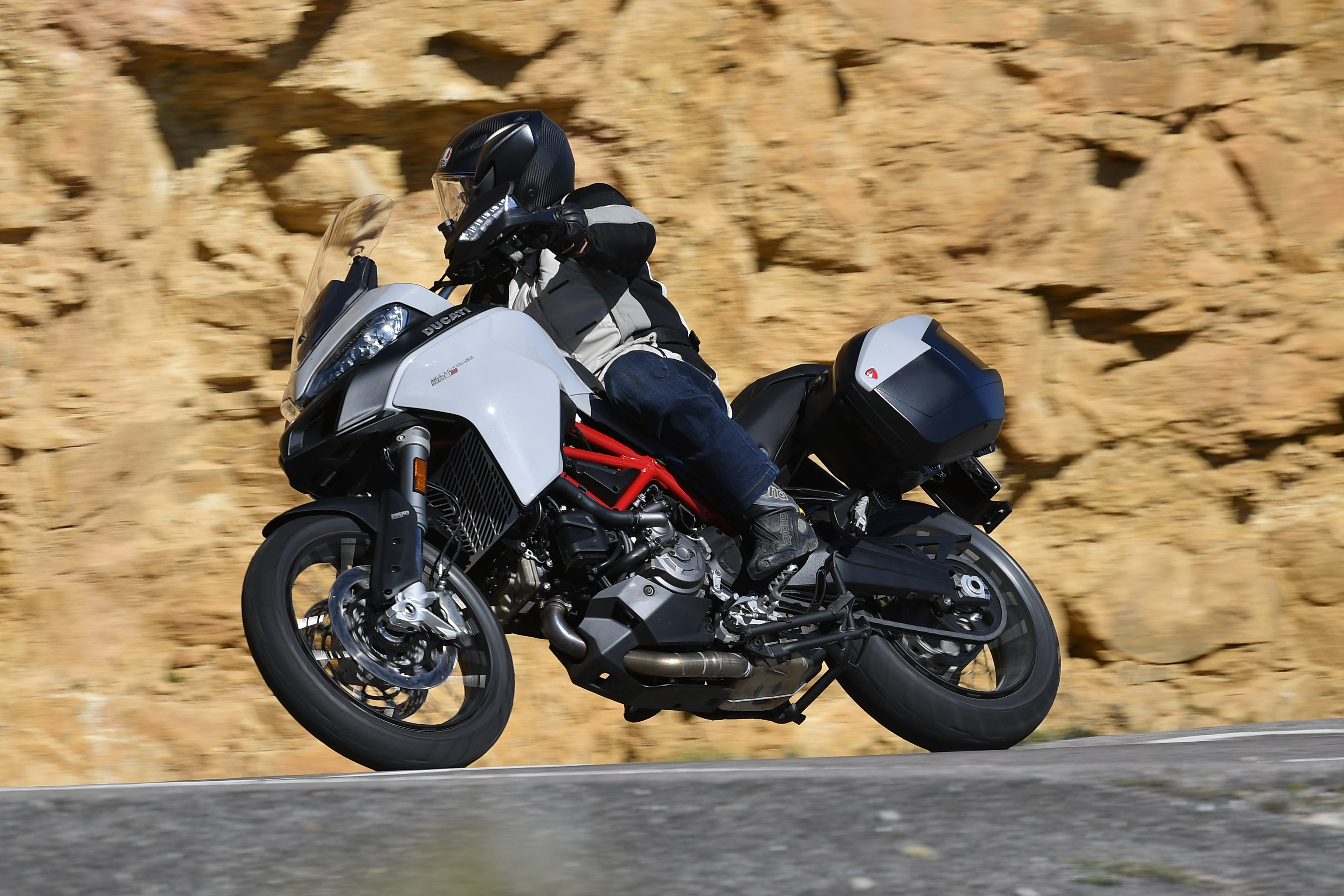 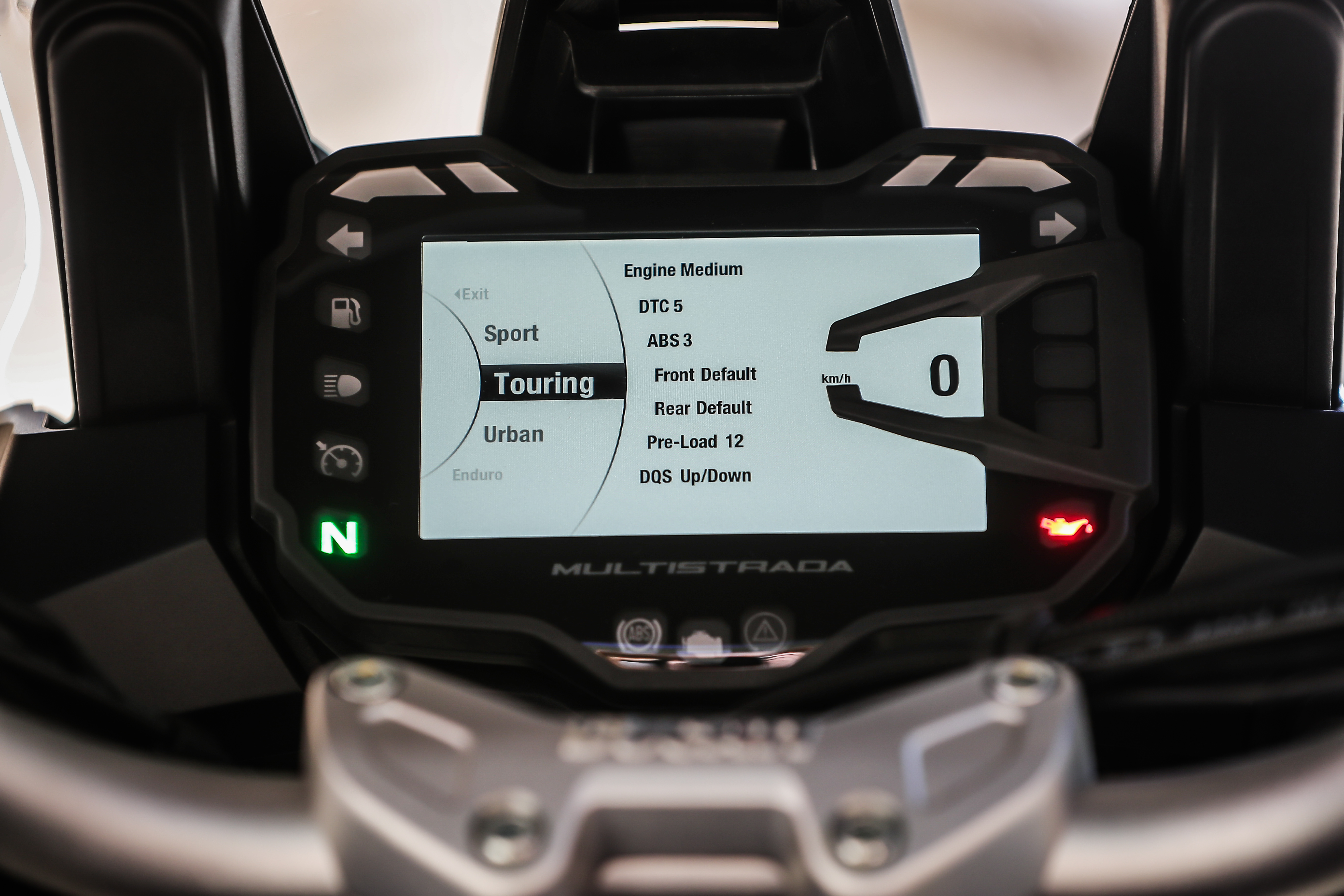 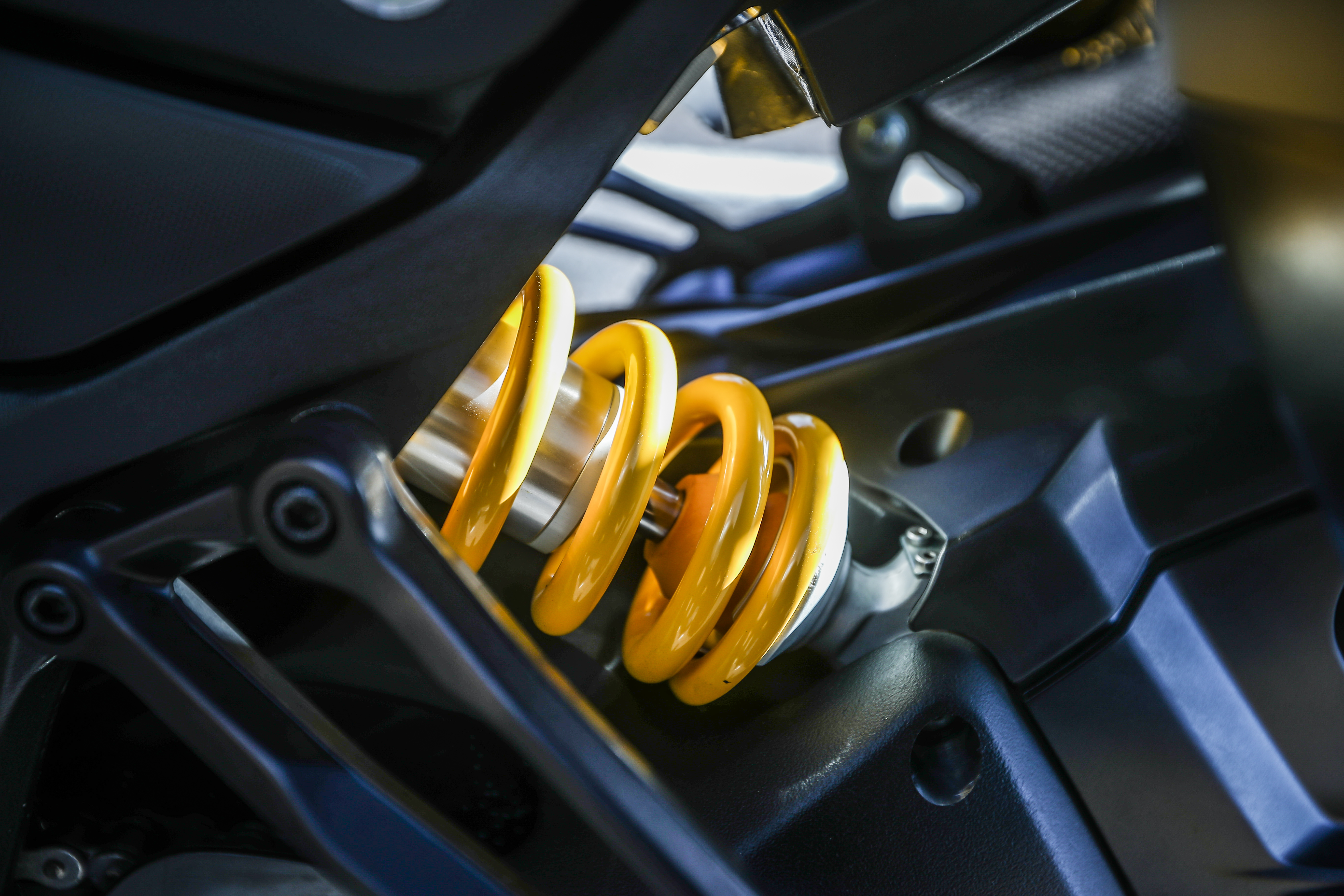 We of the Great White Frozen North, as modest as we like to think we are, can be a little haughty. A little pretentious, even. While we are not quite as slavish to excess consumption as our neighbours to the south, neither are we strangers to competing with the mythical Joneses next door. To wit: even though we buy smaller cars than our American friends — the Toyota of choice south of the border is the Camy; here it is the Corolla — said smaller vehicles are invariably more hedonistically equipped. Ditto for high-end performance options. We Canadians, for instance, buy more premium performance versions — BMW M4s, Mercedes AMGs and the like — than any place on earth on a per population basis. We are far from the largest luxury car market in the world, but when we do decide that we want something, we buy the top-of-the-line version.

It appears our conceit also extends to two wheels, doubly so if you’re a premium European marque. Indeed, said need for ostentation is why, for 2019, we have a new S version of Ducati’s supposedly entry-level version of the Multistrada, the 950. The smaller of its two adventure bikes, Ducati originally sold the 950 as a bargain-basement “entry” into Ducati adventuring. Or, I should say, didn’t sell, because the original 950 — priced at a very reasonable (for a Ducati) 15 large or so the last time I tested one — didn’t move off Canadian dealer floors very well at all. Ducati loyalists, it seems, only want the full enchilada, even in their mid-displacement motorcycles. So, while a few markets still get a base model where even customers of upscale Italian brands need to watch their pennies, for we Canadians — and our Yank friends to the south as well — only the full-zoot 950 S will do.

That means that even the lowly 950 gets a full complement of electronically-adjust dampers — Ducati’s vaunted Skyhook Suspension — Ducati’s Quick Shift transmission and, stealing a trick from the automotive world, Vehicle Hold Control so the Multistrada doesn’t roll backwards when taking off up a steep incline. Factor in Cornering ABS — which prevents wheel lockup even when healed well over — traction control and the company’s latest multimedia interface and you have a mid-displacement motorcycle with all goodies. Think 1260 Multistrada without the gargantuan pistons, if you will.

The first thing that struck me as I twisted throttle on this latest is that it’s no doubt a measure of just how greedy we’ve all become that 937 cc — and the 113 horsepower it produces — has somehow been rendered lesser. Not so long ago, an (almost) litre adventure-touring motorcycle was considered “big” and it’s even more recently that 113 horsepower would have been considered more than ample. 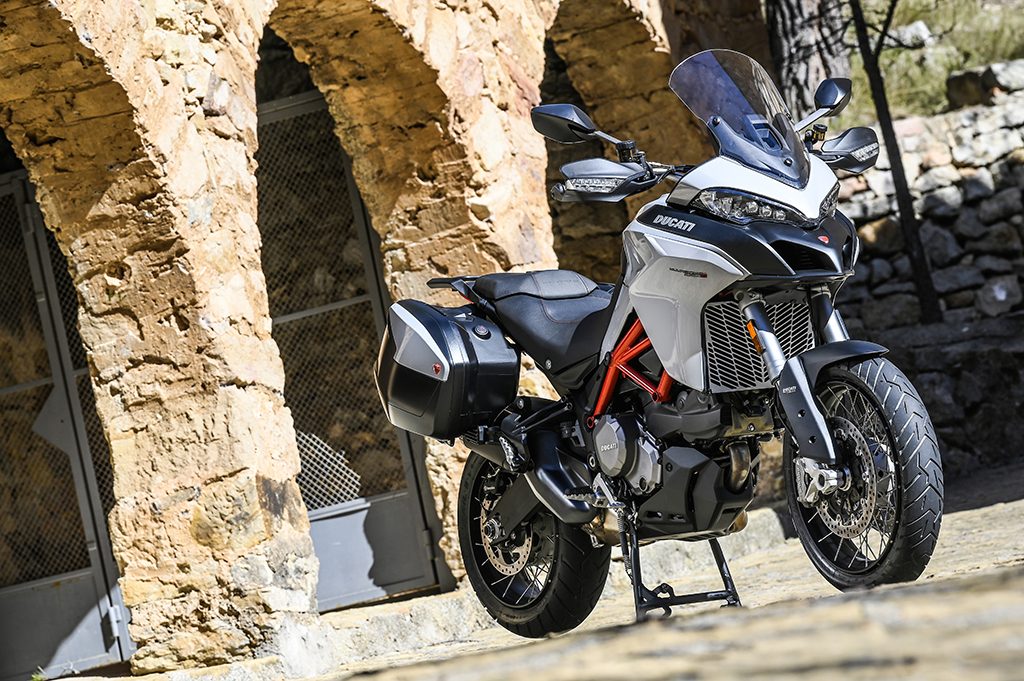 It still is. Oh, some will tell you — indeed, some magazines will tell you — that you “need” 158 horsepower (that’s the output of the new King Kong, 1260 cc version of the Multistrada) and that, somehow, the 950’s 113 horses are inadequate.

Don’t listen to ’em. Ducati’s 937 cc V-twin is largely unchanged from the previous version and, having spent three weeks touring the Swiss Alps two-up I can assure that those 113 horses are more than up to the job. Oh sure, occasionally, if the Alpine pass was particularly steep — like the Stelvio — and high (ditto) I might have had to rev the 950 a little harder than the 1260 version, but there was never a paucity of power. Ditto for the 71 pound-feet of torque; it’s always more than enough, even two up and loaded to the gunwales, for some serious sporting fun. Buy the 1260, if you must, for its increased power. But never fool yourself that you actually need it.

Besides, the smaller Testatretta is the more willing engine. What it lacks in outright urge, it makes up for in enthusiasm. The 94 mm by 67.5 mm bore and stroke is sufficiently over-square that revving is built into its genetic code. Of course, the 950’s internals — crankshaft, pistons, and flywheel, etc. — are lighter so the (supposedly little) V-twin revs eagerly, blowing past its (supposed) 9,000 rpm power peak so fast that you’ll swear the Italians are lying about how many horses the S is pumping out. It’s a sweet, high-revving engine .

Despite revving to the moon — the redline is 11,000 rpm, sky high for a big(gish) twin — and the fact that its eight valves are still actuated by Bologna Panigale’s trademark Desmodromic valve system, this Duke is no longer a high-maintenance nightmare. Unlike the bad old days when Dukes needed serious fettling every second weekend, the Multistrada’s official service interval is now 15,000 kilometres and those complicated valves only need checking every 30,000 klicks. That’s one of the longest such intervals in the business, longer than Honda’s Africa Twin and Suzuki’s V-Strom, both bikes known for low-maintenance longevity. Italian passion meets Japanese stolidity; not a bad deal.

The big news for the 2019 Multistrada 950 would seemingly be the addition of Ducati’s vaunted DSS Skyhook Suspension Evo, a semi-active — and yes, all you car guys, semi-active suspension is no longer a big deal on the automotive side — system that lets you futz with the compression and rebound damping as well as spring preload of both front fork — a 48-millimetres upside down affair — as well as the Kayaba rear monoshock. 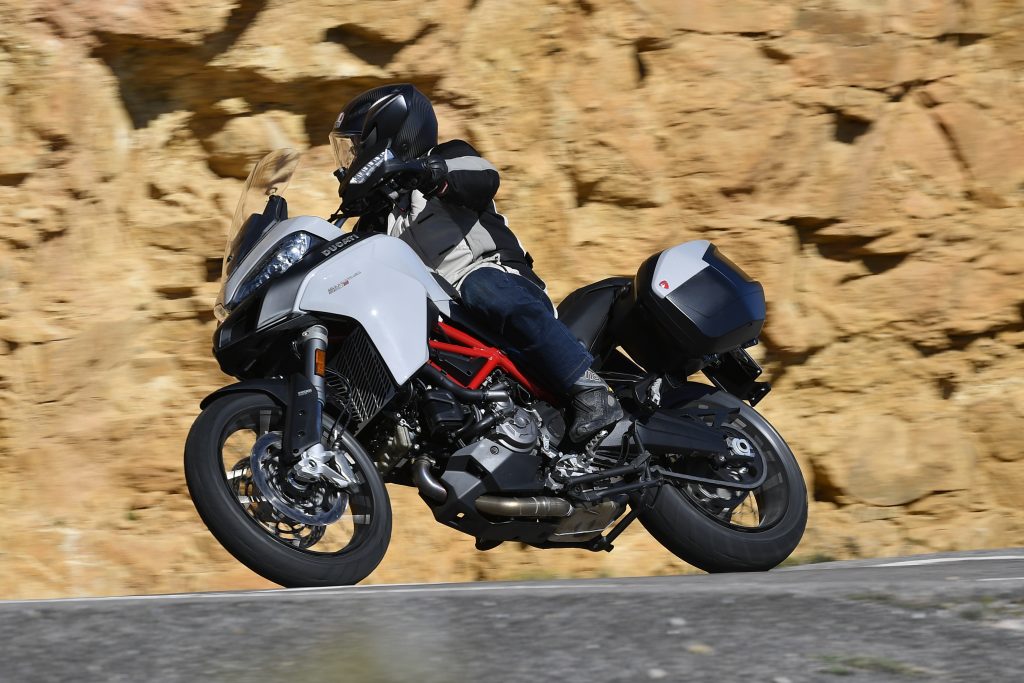 The system is more useful than most such electronic systems, allowing you to easily customize settings — my fave combining soft touring-mode up front with firmer “sport” damping in the rear and lots of rear preload to quicken the steering. Its complexity is a large part of the reason that the new S costs almost $5,000 more than the previous bare-bones 950 (which, as I mentioned, nobody wanted and is no longer available). That said, the suspension was the previous 950’s weak spot, so the combination of better quality damping and user-friendly adjustability is welcomed.

The new S powertrain also includes, as I mentioned, Ducati’s DQS Quick Shift up/down system. Essentially, DQS allows the rider to change up — and down — gears without fiddling with the clutch. Unlike the Africa Twin’s dual-clutch system, there’s still a clutch lever on the left handlebar and you can use it if you want. But the DQS system makes it redundant by cutting the ignition every time you toggle the gearshift lever. Upshifting is as simple as lifting the lever with your toe, the onboard computer doing all the rev-matching, etc. Ducati’s is an excellent example of the breed though all the hardware does seem to make shifting a little higher effort when you’re going old school and manipulating the clutch yourself. 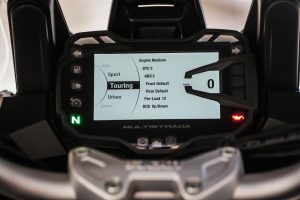 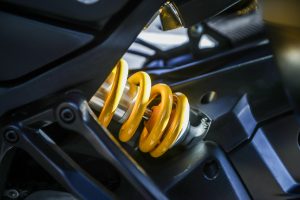 The odd part is that, according to Ducati, this was the high-tech gadget customers wanted most. I say it’s odd because the motorcycle industry is having a little trouble selling the idea of dual-clutch transmissions and yet Ducati fans are clamouring for the DQS which, for all intents and purposes, is just a less sophisticated version of a dual-clutch tranny.

All that electronic gadgetry aside, the 950 S is still a Multistrada, which means it remains very much Ducati’s unique take on adventure touring. That means the 950, even in this year’s revised format, feels sportier than most other adventurers, its handlebar lower and its seat firmer as well. There’s also more windblast from the smaller windshield than you would get from, say, a Triumph Tiger. And, despite the 19-inch front wheel, the 950 is not exactly BMW GS or KTM off-road friendly.

That said, the 950 handles a treat (always a Ducati strength), is seemingly very robust (not necessarily always an Italian trait) and can tour passably, especially when you add the Tour Pack with its luggage set, centre stand and heated handgrips. For those looking for something on the sporting side of the touring equation, the Multstrada 950, now in this new S guise, is worth investigating.

That’s if you don’t mind paying five grand more than the previous, un-digitized version, that price hike, as I have said, the result of the increased electronics that consumers say they needed. Nobody better write in and complain that Ducatis (in particular) and motorcycles (in general) are getting too expensive.

Surprisingly, a grey Ducati now costs more than a red one. For 2019 a Multistrada 950 in grey — hey it’s a glossy grey — costs $20,495 while the it’s-Italian-for-God’s-sake blood red model retails for $19,795. Go ahead, try defending that hipster aesthetic.