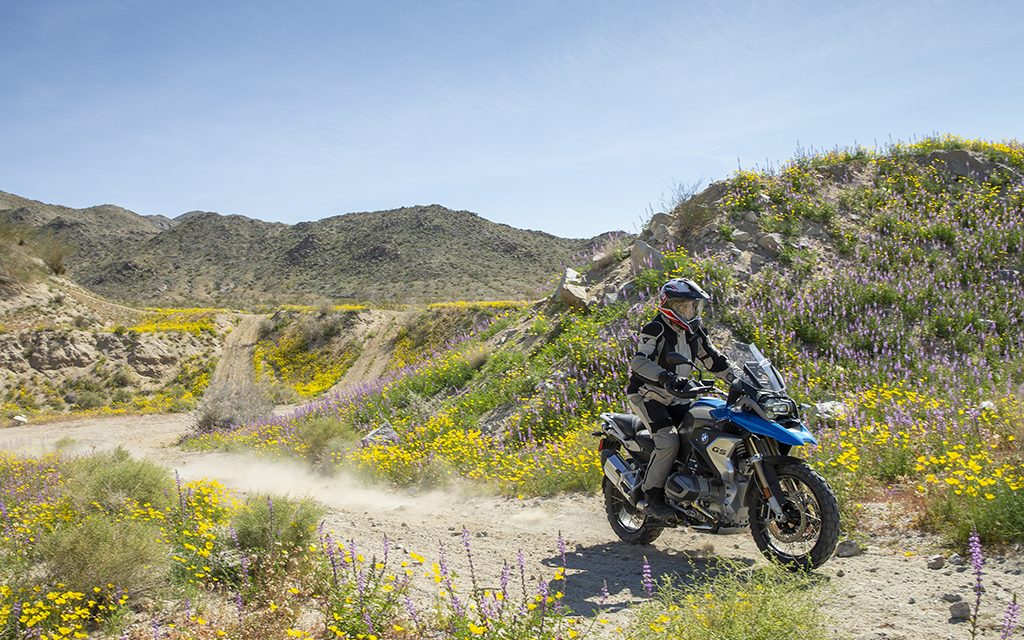 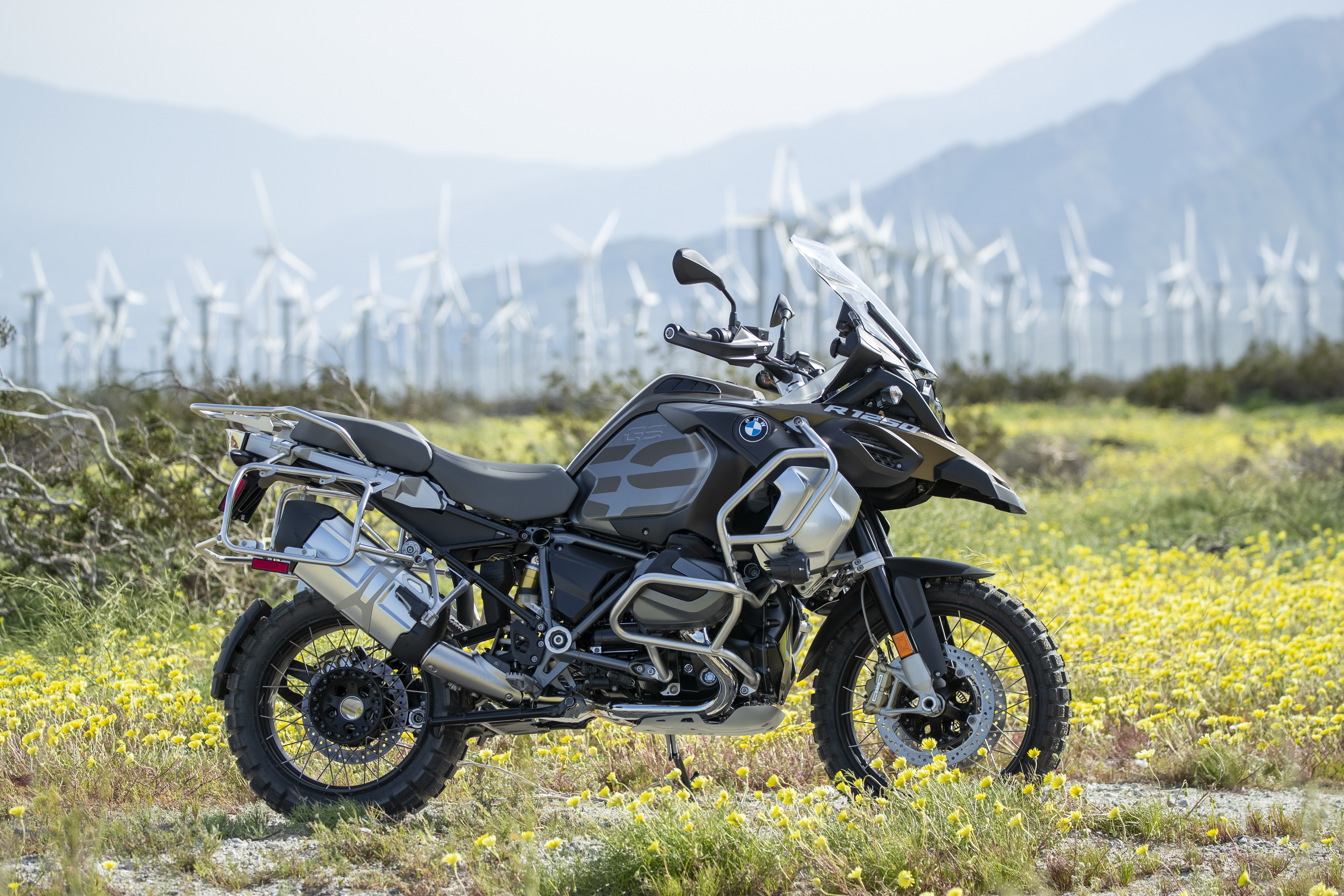 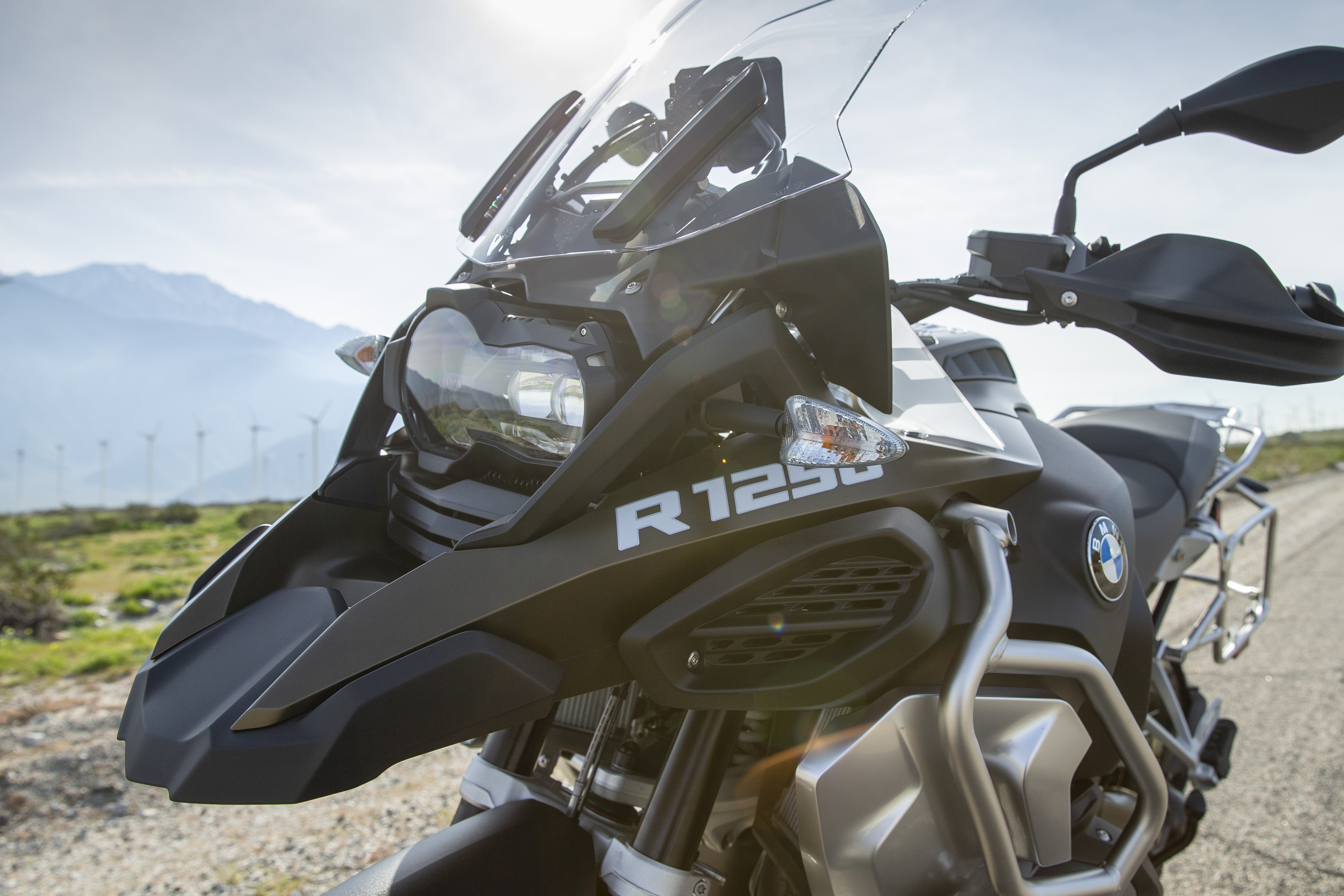 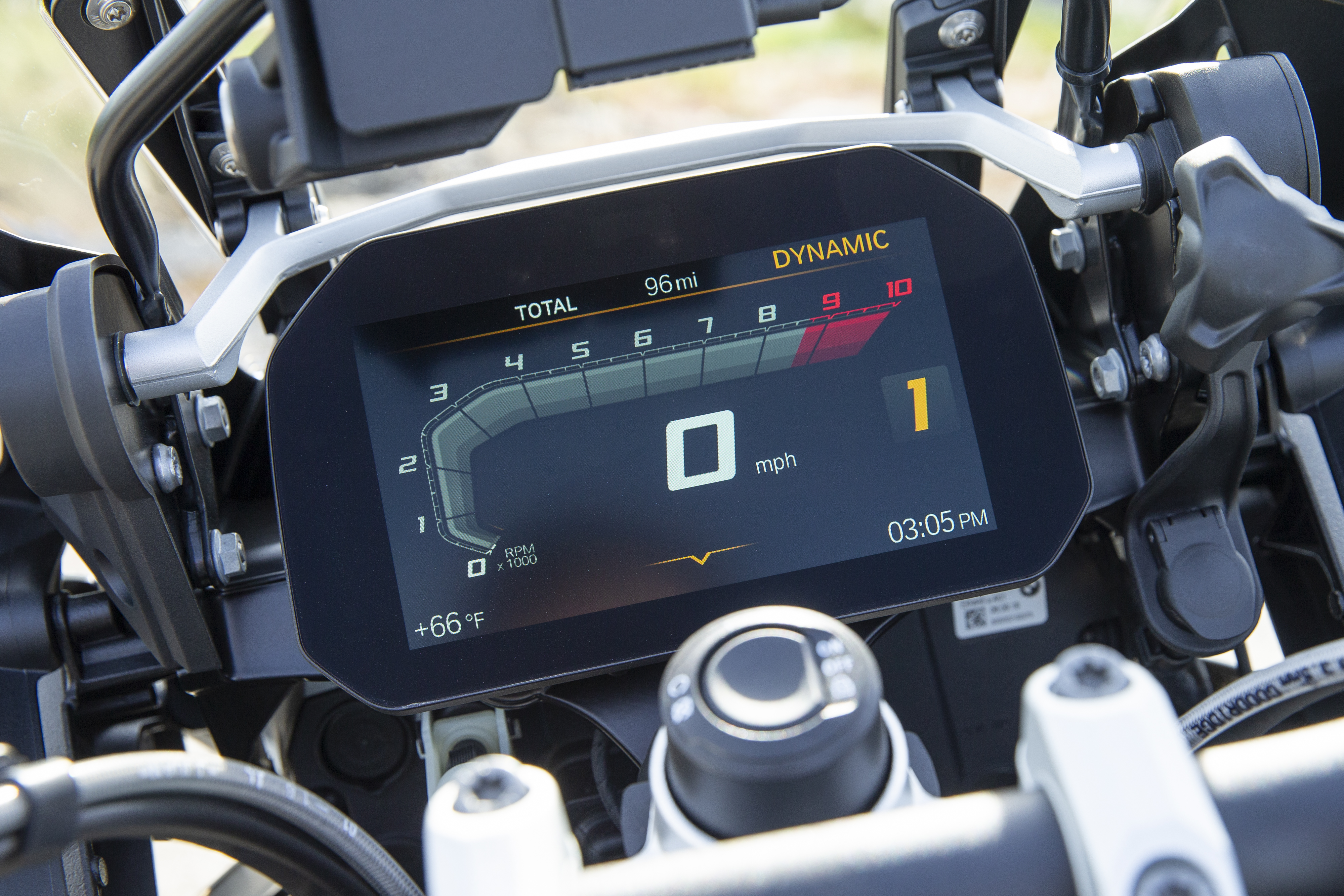 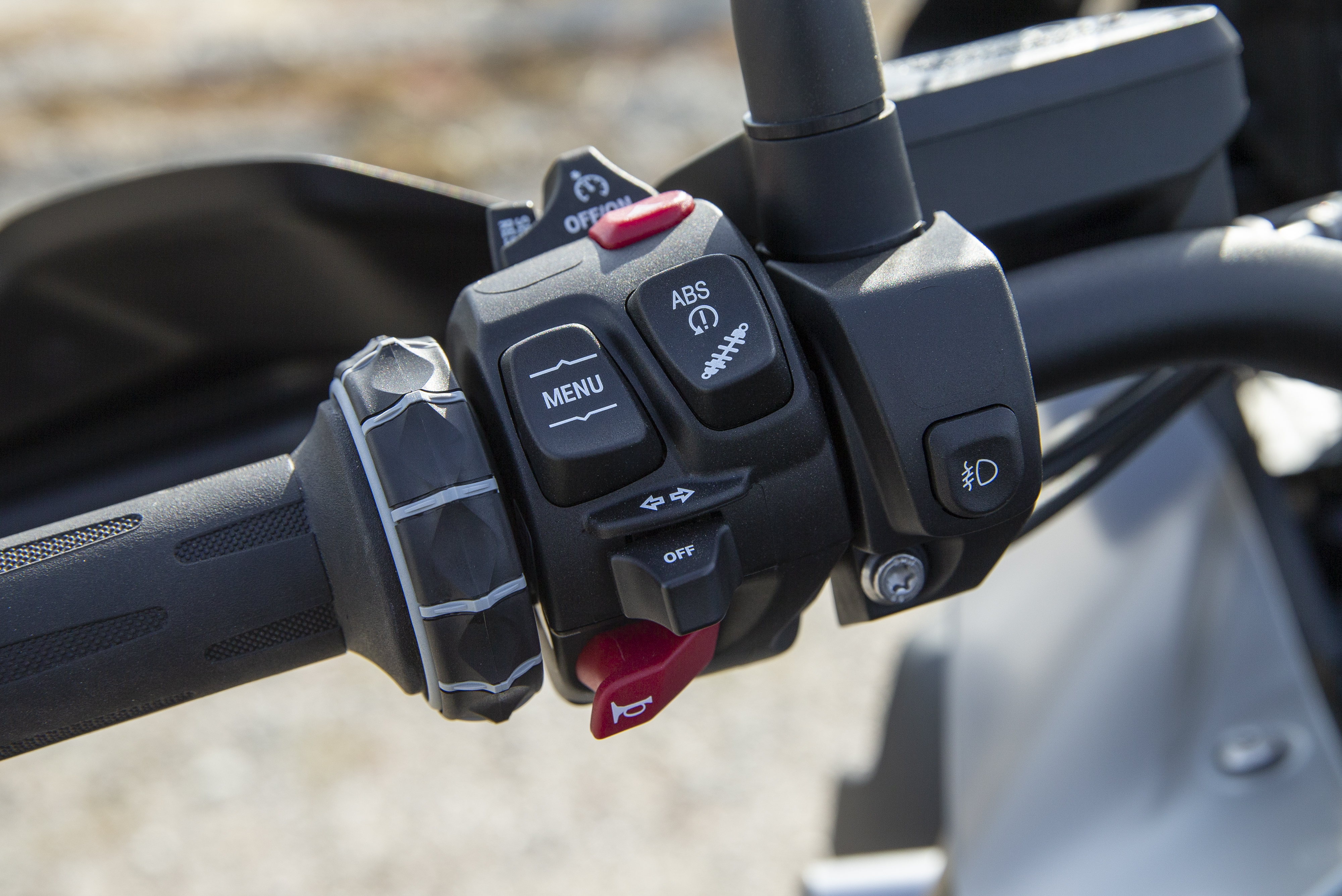 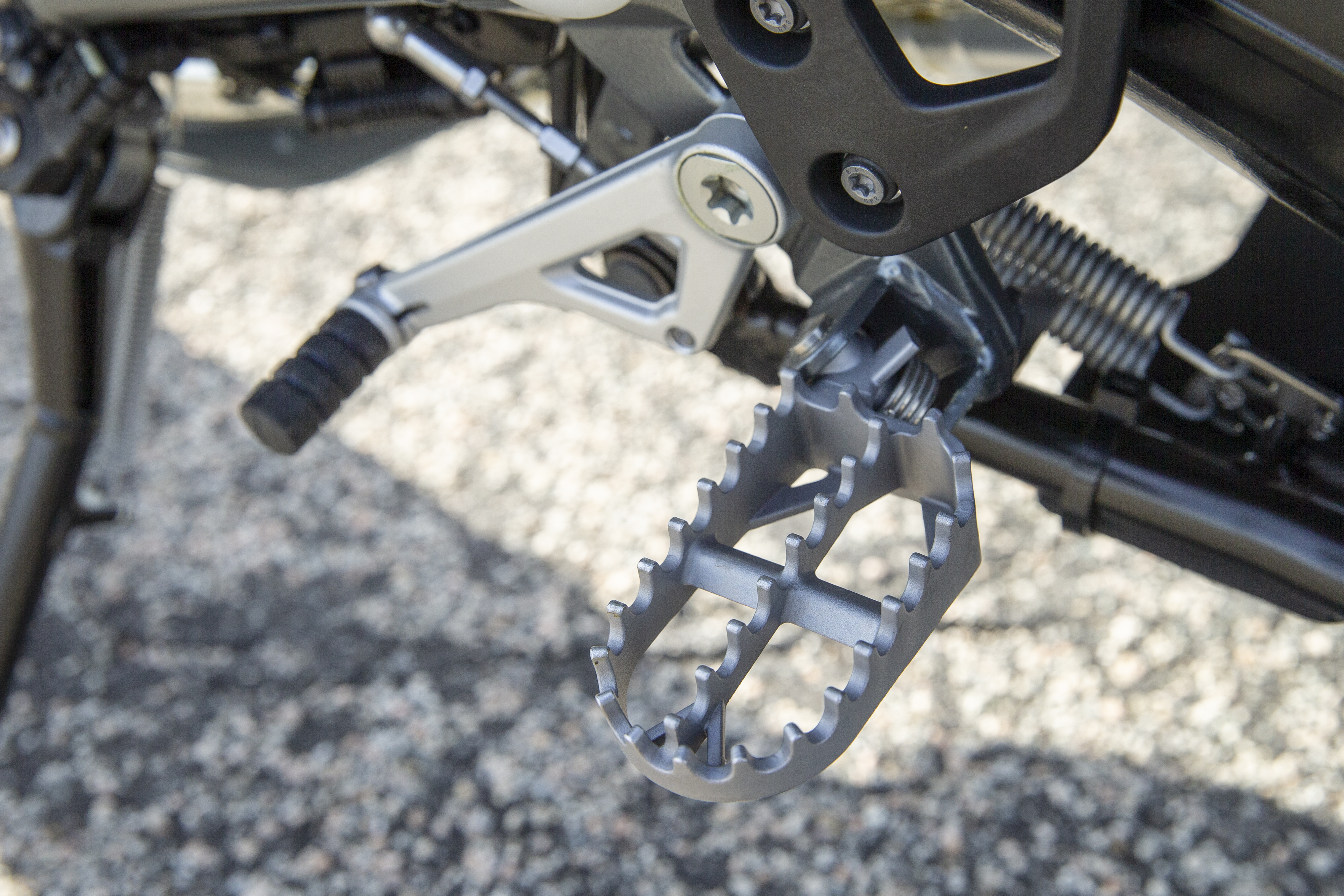 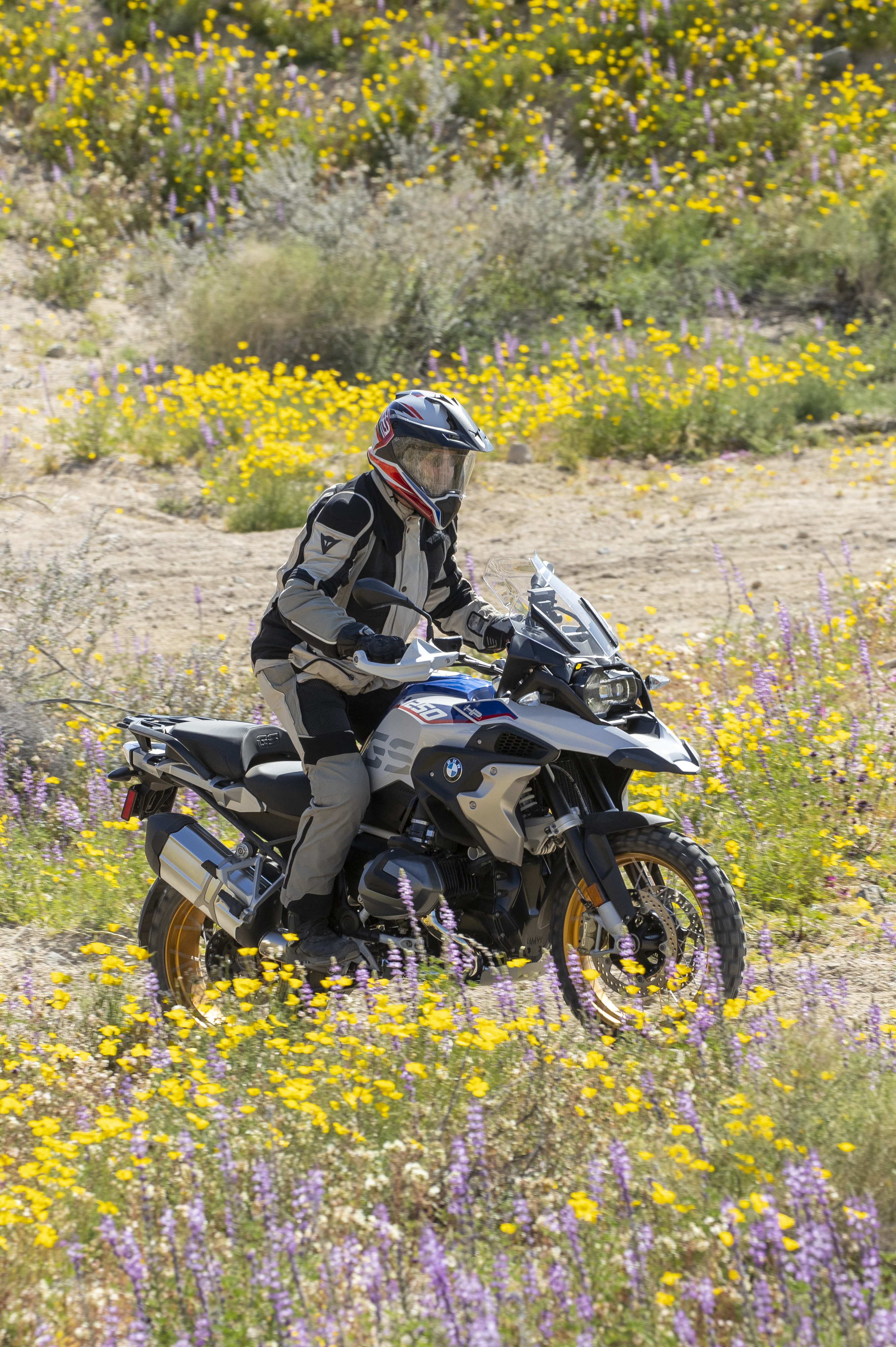 It was very much a Keystone Kops routine. One minute there was a line of pristine 2019 R1250 GS Adventures traipsing regally down a moderate-to-rigourous California desert trail, (supposedly) professional motorcycle journalists clutching huge 30-litre gas tank firmly between their legs, knees bent just so and arms (hopefully) loose to allow the front TKC 80 Continental its momentary misdirection as it hit rut, rock and occasional sand wash. It was truly the perfect picture of adventure touring, emphasis on the adventure portion of that equation.

Then we hit the mother of all washes, swathed in soft, almost “quick,” sand hiding sunken boulders and enough other treachery to start an ass-over-tea-kettle slapstick routine worthy of Charlie Chaplin. A few — OK way, way too many — false starts later, a few of the erstwhile adventurers gave up the ghost, laying their big GSs — gently, if they could — down on their sides, what talent and fitness they possessed defeated by 268 kilograms of motorcycle and a supreme lack of traction.

It was yet another lesson that motorcycling, in all its extremes, must be taken very seriously. And indeed, one of the fallacies of adventure touring is that, with enough suspension and knobby enough tires — both of which BMW’s GS Adventure has in spades — all things, as in all terrains, can be conquered.

In actual fact, adventure-touring bikes punish poseurs just as much as 200+ horsepower superbikes do. Putting a big adventure tourer — and, again, the 1250 GSA weighs in at 268 kilos — through its off-road paces is no less difficult than testing the limits of on-road traction with 207 horses (coincidentally, the maximum output of BMW’s new generation S1000) at your disposal. Neither suffers lack of talent, the main difference being that tumbling off an adventure bike at 20 kilometres an hour is usually less of a catastrophe than high-siding a superbike at a buck-fifty exiting Mosport’s infamous Turn II. 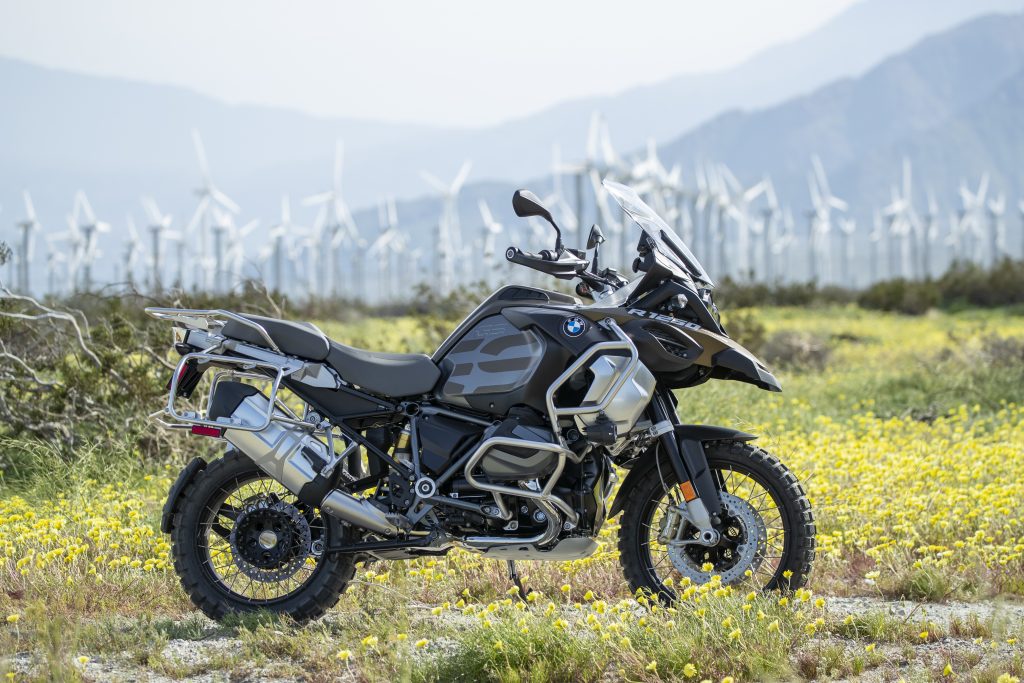 Nonetheless, if you’re going to really put a large displacement adventure bike to the test, it helps to have some special, uhm, talents. For instance, being a 6-foot-3 ex wrestler who’s kept up his core exercises would be a big help. Absent overwhelming muscle, then possessing actual talent — like, say, extraordinary 5-foot-1 GS Trophy racer, Jocelin Snow, who kept showing me her hind wheel — certainly helps.

All those warnings against talentless derring-do aside, in capable hands, the big GS is a marvel, one of the very easiest — KTM’s marketing department might get a little short with me if I just said easiest — big adventurers to venture off-road with. Certainly — and, now all you KTMers will just have to take it on the chin — it is the easiest of comfortable big adventurers to pound whoops with.

There’s a lot of reasons for its abilities. Big GSs are always blessed with superior suspension, the 2019 GSA no exception with 210 millimetres of ESA electronically-controlled fork in front and an equally whoop-de-doo-absorbing 220 millimetres in back. There’s also BMW’s vaunted Enduro Pro riding mode, melding precise throttle control with just the right amount of safety nannie intervention — the rear ABS is disabled so you can lock up the rear, but the front Brembos are still electronically modulated — to make all that horsepower and brake power manageable.

Mostly, however, what separates the big Beemer from its large-displacement competition is its Boxer engine. Now, the big horizontally-opposed twin might not initially seem like the ideal off-road powerplant, what with gigantic cylinders hanging way out there in the breeze (I say they make the ultimate crash bars), getting in the way of feet and occasionally banging off rocks. But, with big pistons, connecting rod and crankshaft set so low in the frame, the GS, for all its avoirdupois, has an amazingly low centre of gravity. And, if one has to go venturing off-road on a 268 kilo motorcycle, take my word on this, you want as low a c of g as possible. Oh, and by the way, I may have been at the end of the Keystone Kops parade, but I was one of the few — instructors included — who didn’t perform a classic silent movie face plant.

Aside from carrying its weight low, the big Boxer engine, especially this 2019 version, is something of a marvel. Indeed, it’s hard to believe that this liquid-cooled model of fuel-injected sophistication has lineage even remotely related to the clunky old beast that powered my old R75/5. Polished where the Airhead was clunky, smooth where the /5 was vibey and astonishingly powerful where old Boxers were — what was the quaint word we used to use when we were trying very hard not to insult dated engines? — torquey, this latest version of the now familiar horizontally-opposed twin is truly something to behold. 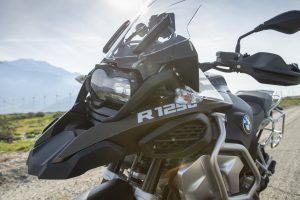 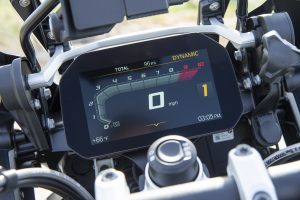 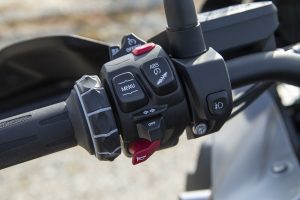 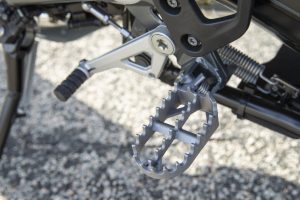 That has been made especially so thanks to this year’s upgrade, the new ShiftCam variable valve timing system. Essentially an all-new top-end — the crankshaft and transmission remain essentially unchanged — the ShiftCam is a new take on a familiar new(ish) technology.

Essentially, the big twin’s intake valves — there are two per cylinder — now have twin camshafts. Or more accurately, two different lobes on a single camshaft. Either way, the new ShiftCam engine now has one set of “cams” for low-speed operation and another set for high-speed. Essentially, as with all variable valve timing systems, it offers two engines in one; the first meant to optimize response as soon as you crack the throttle and another so it continues to go like the Dickens once things get WFO.

And fly like the Dickens it fairly does. BMW’s boxers of late have been surprisingly powerful, but this one is creeping awfully closely to Ducati territory. BMW says it has 136 horses, but since they’re also accompanied by a rousing 105 pound-feet of torque, performance is, as they say, stout. Perhaps, even stellar.

Even more impressive is how linear the throttle response is, the big GS’s power production a perfect example of the flat torque “plateau” that all engine designers claim to seek but few actually accomplish. Seriously, the new 1250 — along with the ShiftCam gizmo, displacement has been bumped from 1,170 cubic centimetres to 1,254 cc — response differs little if you’re at 3,000 or 6,000 rpm; in third or fifth gear: It simply powers ahead, always unruffled. Neither electric motors nor six-cylinder Gold Wings have much of an advantage over this new Boxer. Mission accomplished: ShiftCam variable valve timing. 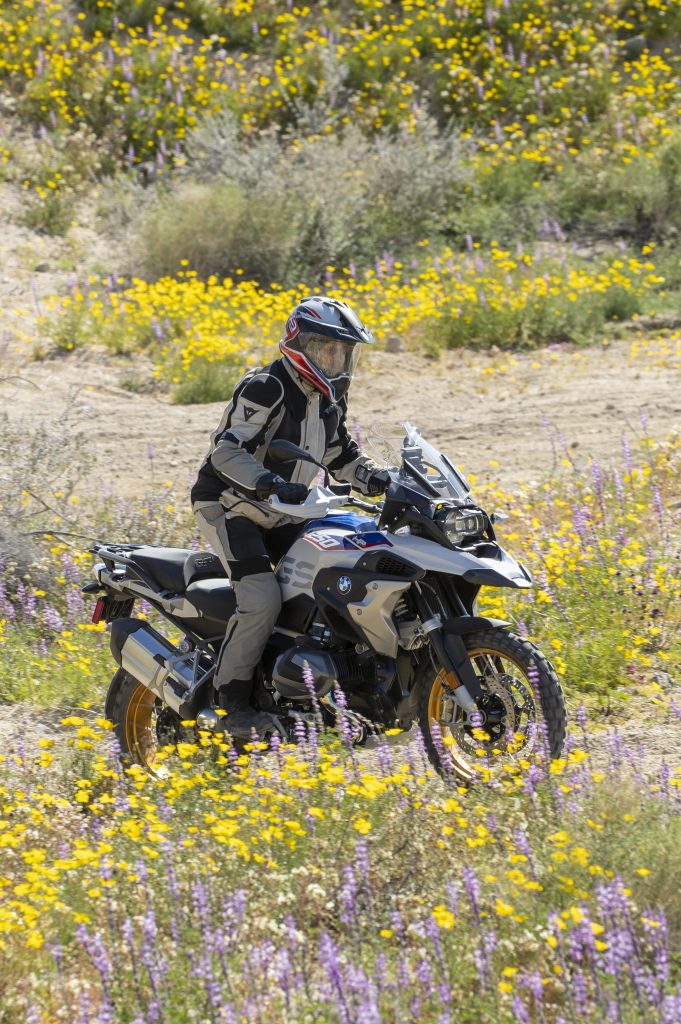 So, it’s a stonking motor. What else has it got for me?

Well, along with the other two new items this year — the moderately useful Hill Start Pro and the Dynamic Brake Control system that nobody asked for — the 1250 GS is chock-a-block with the electronic gadgetry that simultaneously opens the wallets of the modern motorcyclist and renders competitors jealous. TFT’ed digital instrument panel? Gotchya covered. Electronically-adjustable dampers? Ditto. Load-leveling preload adjustment? But, of course, monsieur. Throw in the aforementioned ABS, traction control and multiple riding modes and you have enough of a digital playground to keep even an iPhone addicted Millennial occupied.

And it all actually adds to the experience. Being able to adjust the suspension on the fly, for instance, comes in handy. So does the fact that said suspension is both cossetting and controlled. Being able to quickly toggle between Dynamic, Road and Enduro pre-sets that condition suspension as well as throttle response and ABS operation between road, race and dirt settings is a boon, especially for those who take their adventuring seriously. And always having the preload keeping an even keel when you pack on the passenger and parcels is also welcome. Indeed, in most, in fact nearly all, realms, all this sophistication is a blessing.

That’s true for even the non professional dirt-biker and even those who have no intention of ever venturing further off-road than a cottage driveway. A GS BMW is comfortable, durable and powerful enough for globe trotters, fast and quick-steering enough to satisfy backroad bandits and versatile enough that it blazes a trail through Mongolia as easy as cruising down a California freeway. There’s a reason the big GS is the most popular bike BMW builds. The new ShiftCam engine just made it better.