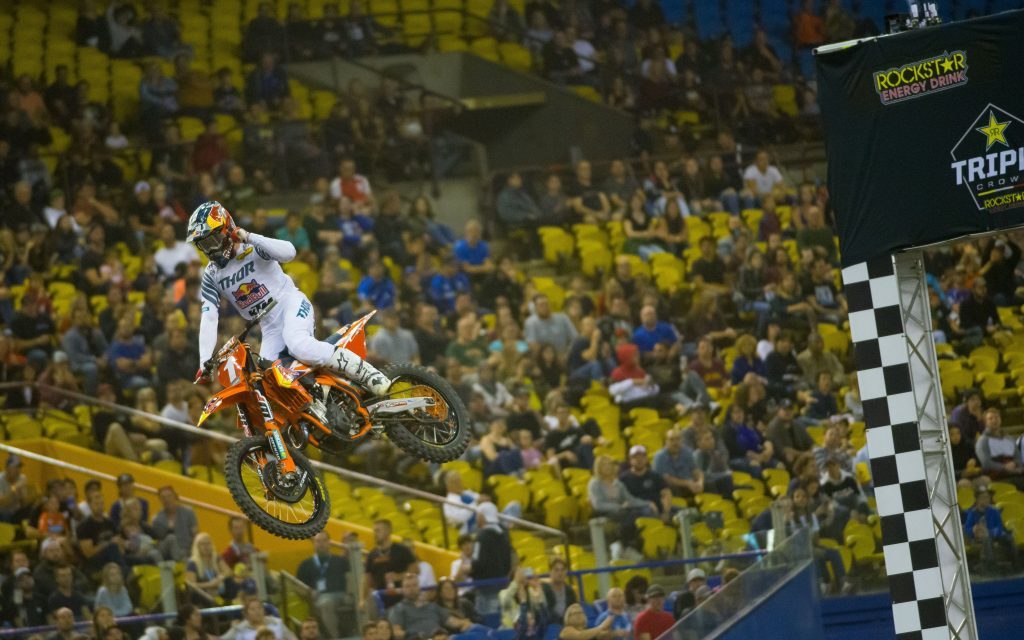 It was a tough weekend for the KTM Red Bull Thor Factory Team in Montreal for the first round of the Triple Crown SX series. All three riders kept their spirits high despite some bad luck throughout the night. We are looking forward to lining up for round 2/3 in Quebec, City on October 5th, 2019.

In the 250 class, Jess Pettis started the night on the right foot. The KTM pilot qualified first in the 250 class, and finished 250 Main #1 miles ahead of the competition. In the 2018/2019 AMA SX season, Pettis proved himself as one of Canada’s best indoor racers. He was feeling on fire in Montreal. Unfortunately, early into Main #2 things took a turn. Pettis went down in the first turn and tweaked his left knee. He was unable to finish the race and flew back home to Prince George, BC to have his injuries accessed. It is too early to say if Pettis will be able to continue the SX series in Quebec, City.

Tanner Ward also experienced a crash in practice and was unsure if he would be well enough to continue the night. Luckily he had enough strength to line up for both 250 Main events and he finished the night with P-7 and P-9 for P-7 overall. Ward is a very consistent rider, we are confident his results will only improve over the next two rounds of the Supercross Series.

Jess Pettis – KTM Red Bull Thor Factory Race Team 250 Rider: “Montreal Supercross started great. I was the fastest qualifier and was able to win the first main event. The second main event did not start well, as I had a first corner crash. My knee bent the wrong way and I instantly knew something was wrong. It forced me to DNF and I was carried off the track by the medical crew. I am hoping my knee isn’t too bad, but I will need to get scans and see what the issue is.”

Tanner Ward – KTM Red Bull Thor Factory Race Team 250 Rider: “Montreal definitely didn’t go as I hoped, I had a really bad crash in practice but still decided to give racing a shot. In Main event #1, I had a very bad start, but still managed to get 7th place. In Main event #2, I got tangled up in the first turn pile-up, but made my way up to 7th before unfortunately getting tangled up with another rider and going down again. After falling twice, I finished Main #2 in 9th place which scored me 7th overall on the night. I hope to heal up over these next couple weeks and line up in Quebec City healthy!”

In the 450 division, the class was stacked with some iconic Supercross racers from the United States. Despite the steep competition, KTM Red Bull Thor Factory Racer Cole Thompson held his own. It was Main #3 that impacted his overall results when he was docked five positions for missing a track marker. Thompson finished 5-5-11 for P7 overall.