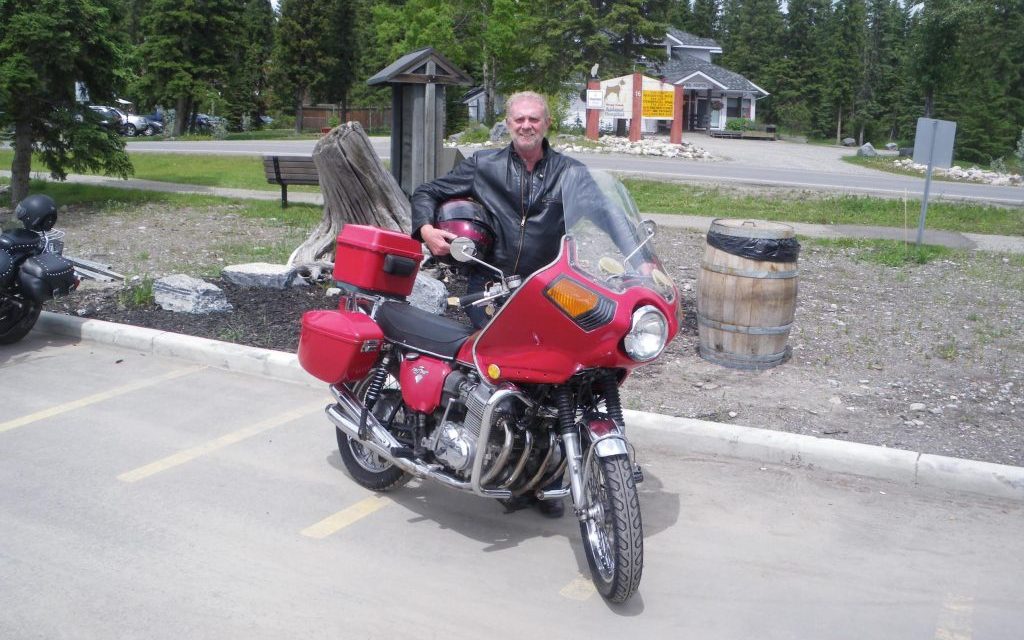 Dorval, Quebec, February 1985. Transferred to Calgary on two weeks’ notice. My ’72 CB750 stayed behind with a friend, and with a promise to return for her. When I costed shipping the bike out west, it turned out that the price to ride it to Calgary was the same. Road trip!

September rolled around. I returned to Montreal to dust her off and after a day’s work at the Honda shop in Lachine she was purring like a tomcat in a creamery.

I slept in the next day and headed west on the two-lane after lunch. Late afternoon, the bike started misfiring and was getting worse. The next town was Brockville, so I headed there and found a Honda shop. One good thing about Honda Canada; they have shops everywhere. Even though it was Saturday and by this time getting late, the mechanic took pity on me when I explained where I was going. He stayed late for me and quickly determined that one set of points had been installed backwards and was consequently fried. Easy fix! Back on the road. It sure is beautiful riding along the Thousand Islands in the early evening. I stayed overnight at my sister’s place in Brampton and was in no rush , so cleaned the bike up after breakfast and then headed for Sudbury.

It was cloudy and wet leaving Sudbury that Monday, but it was so peaceful, I didn’t mind. The roads are wonderfully empty after Labour Day. I hadn’t seen Lake Superior in some time, but near Montreal River I spied a trail that looked like it headed down to the water, so off I went. There was just enough room at the shoreline for me to turn the bike around and shut it off. I just sat beside it absorbing the experience. The lake was like glass and the only thing I could hear was the soft ticking of the engine. You could say the silence was deafening and I realized that I was completely alone: no sound, no vehicles, no nothing. It was 1985 AD but could just as easily have been 1985 BC. It was a true Zen moment. I sat there for some time, not wanting to break the spell.

Eventually I pulled back out onto the road heading west. Later in the afternoon, the sky cleared, and it was a beautiful evening. As I rode along Highway 17, a BMW 750 joined me at White River and stayed with me in formation all the way to Marathon, where he pulled off. We waved at each other and he was gone; two ships passing in the afternoon, I guess.

The plan was to overnight in Thunder Bay, but by then, I was so tired that I’d started weaving, and I still had a couple hours to go. First clean motel was in Schreiber. It turns out that Sudbury to Schreiber is 642 miles (1070 km). Best day in the saddle for me, ever! At the end of a long day on the road, it sure is nice to sip a brown bottle while  cleaning up and going over the bike.

Totally refreshed the next day, I waved at Terry Fox on leaving Thunder Bay and headed west towards Winnipeg. Those hills, lakes and unending forests just go on forever, endlessly beautiful. Riding alongside Lake of the Woods, about 50 miles west of Kenora, I climbed up a hill and it felt like I had just been plopped onto a tabletop; it was simply flat as a pancake. The difference between the forests behind me and the prairies ahead of me was night and day. I pulled over onto the shoulder and removed my helmet to better take it all in. About 30 seconds later, the Manitoba Mosquitos descended on me in the thousands—my nose, my ears, my mouth, everywhere. I booted it ahead a few hundred feet, helmet between legs, then quickly got it back on and got the heck out of there. I now have a visceral understanding of how those mules, horses and people went mad on the westward trek last century!

As I rode on, it occurred to me that I was quite alone in this huge country of ours; just me and my bike. My wife knew only roughly where I was. This was before cell phones, of course.   Flat as a pancake all the way to Regina. The city appeared around 5 p.m. like a mirage.

My last day on the road dawned cloudy and gusty. Most people say that crossing the prairies is boring, but I found it hypnotic and tranquil. As the day wore on, I’d avoided a few thunderstorms, but it was inevitable, and I was soaked when I entered Alberta. It was still warm though, and once you’re wet, you’re wet. Hours later, I was still enjoying the swim until I reached Strathmore, about 40 miles east of Calgary. The wind shifted to come from the south and the temperature dropped about 10 degrees. It occurred to me that we occasionally do get snow in September. That nice tailwind turned into a gusty cross wind and was slamming me right across the Trans Canada. Despite being frozen and soaked as I arrived in Calgary, I was sad that the trip was over, but then it probably was snowing in the Rockies. My amazing wife, who understands a man and his motorcycle, was probably wondering where I was by then anyway. When I shut the beast off, I was so numb and cold that I fell over.

As it happened, two weeks later, we did get a dump of snow and the temperature dropped to the minus 20s. Timing is everything, eh?