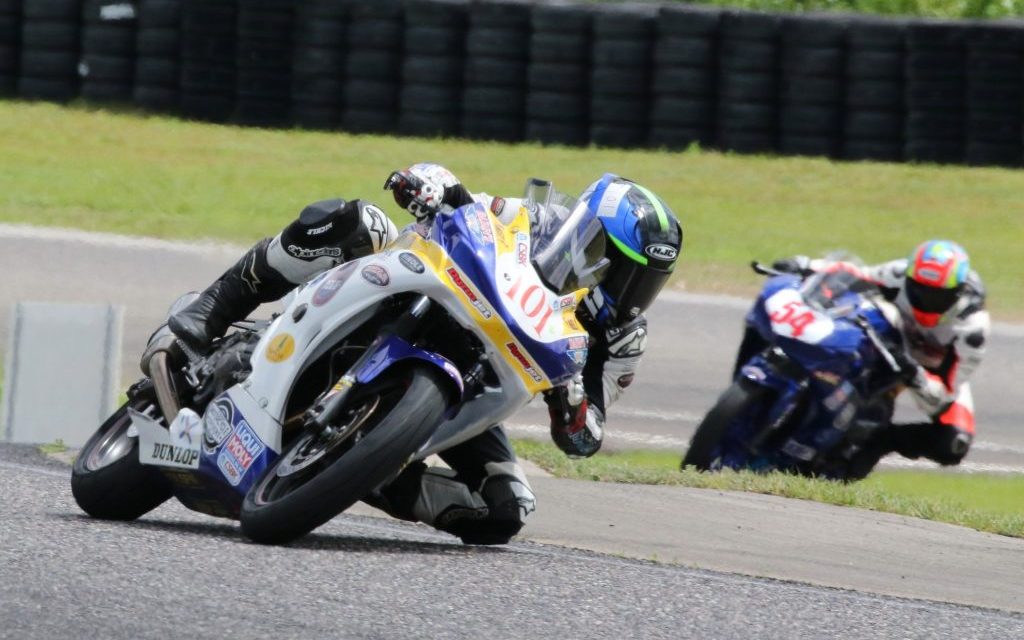 After a three-race skid that saw the Princeville, NS native go from a 40-point lead to a 48-point deficit, a motivated Hart left little to the imagination on Sunday, grabbing an early lead aboard his WRBF Racing Yamaha YZF-R3 and storming his way to a near 15-second victory.

“I just checked out early and kept my head down, and I knew I couldn’t let off because I had to win this one,” said Hart. “My team has been super supportive while I’ve been struggling, and they stood by me and helped me get back where I should be, and that’s at the front of the grid.”

While Hart was able to move back into second place in the overall standings and trim his deficit to 38 points, his gains were limited by another strong performance from championship leader Ben LeClair, who finished second aboard his bLU cRU Yamaha.

The Blackstock, ON teenager nearly cost himself at the end, however, as he slowed his pace dramatically on the final lap to secure the second-place result, only to come under intense pressure from Keegan Gaudet in the final few corners.

“I rolled out of it a little too early and Keegan kind of scared me at the end,” LeClair laughed. “Luckily I held onto it, which is good for the championship considering Avery won, but next time I’ll try to finish a little stronger.”

LeClair ultimately held on by just under a half-second, but Gaudet nearly made it a WRBF Yamaha one-two finish as the Ellerslie, PEI teenager made a desperate lunge at the finish line to round out the podium.

“Oh man, one more lap and I would have caught Benny, maybe even a couple more corners,” Gaudet said. “It’s great to see Avery back on the podium with me though, and hopefully we can continue getting both of the bikes up here in the future.”

The double-podium result for Gaudet was enough to move him to third in the championship standings, as the youngster now sits 39-points back of teammate Hart for the second spot and 77 points behind LeClair for the overall lead.

Things will be much more in Hart and Gaudet’s favour when the series returns next month, however, as the two will head to their home track of Atlantic Motorsport Park for round four of the National series, a circuit that is notoriously kind to local riders.

Finishing just outside the podium in fourth place was Canadian Motorcycle Hall of Fame inductee and female racing legend Toni Sharpless, who achieved her best result since coming out of retirement to join the Lightweight class in 2018.

The Newmarket, ON native was typically cheerful following the impressive outing aboard her Yamaha machine, as she congratulated her younger counterparts after a terrific late-race battle.

“That was the most fun I’ve had racing in years! That was such a blast,” Sharpless said. “I was catching Keegan too, but I just wanted to focus on keeping everyone behind me. That last lap was probably one of the best battles I’ve had in a while.”

Rounding out the top five from Sunday’s race was Bowmanville, ON teenager Matthew Simpson, who initially ran as high as third but faded as the race went on aboard his Evans Racing Honda CBR500.

Despite the disappointing result for Simpson, it was enough to promote the youngster to fourth in the championship standings, as former points runner-up Alex Berthiaume out of Laval, QC crashed out aboard his Yamaha Laval machine, promoting the trio of Hart, Gaudet, and Simpson ahead of him.

The class will now get a three-week layoff before returning to AMP on July 19-21, where they will reunite with the rest of the CSBK classes in round four of the National calendar.

Full results from the weekend’s races at Calabogie Motorsports Park, as well as information regarding round four, can be found on the series’ official website at www.csbk.ca.