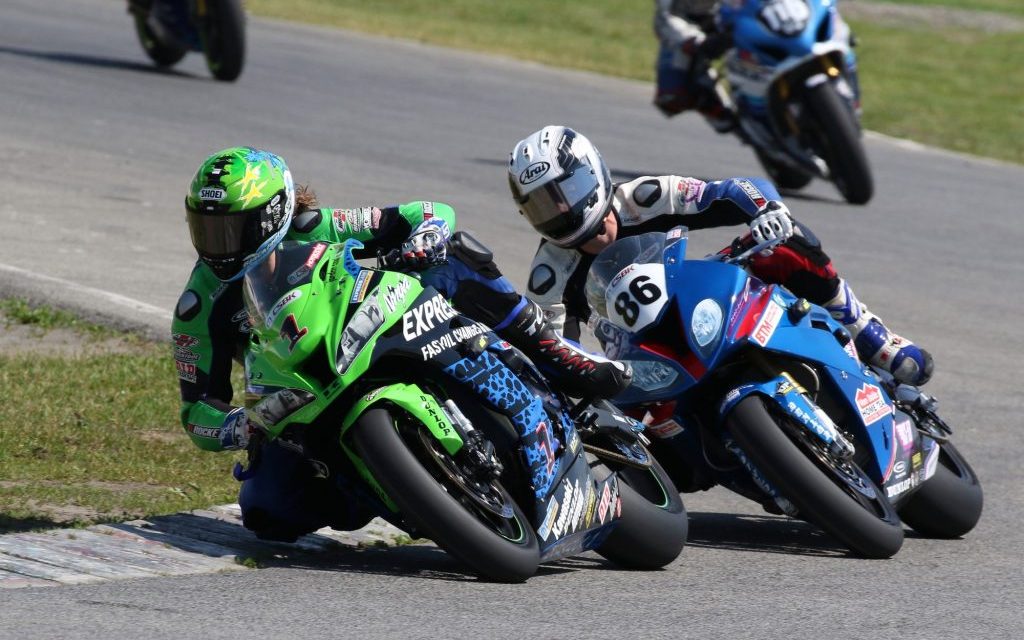 Four-time defending Mopar Pro Superbike champion Jordan Szoke may have won a number of races at Autodrome St-Eustache, but none were likely as meaningful as his victory on Sunday in the third round of the Mopar Canadian Superbike Championship.

Entering with a 28-point deficit to Ben Young, the 13-time National champion needed a victory to keep his rival in sight and did just that, outlasting Young on brakes on the penultimate lap to win a thrilling contest that possibly featured more passing than the two prior races combined.

The Lynden, ON veteran was visibly emotional after the victory, as not only did it earn him the title of being the last ever CSBK winner at St-Eustache, but it was also his first win since returning to the Mopar Express Lane Kawasaki ZX-10R Ninja team.

“It took longer than expected, if I’m going to be honest, but that’s racing, and it just makes it feel even better,” said Szoke. “Round one was tough for us, but round two felt a lot better and this weekend it all started to go right for us. I wanted to be up front on the last lap, so it worked out in my favour and I got a good run to hold on for the win and we’re going to keep fighting for this thing right to the very end.”

As for Young, the Collingwood, ON rider will still leave La Belle Province with an 18-point lead in hand, but with Szoke now squarely in his rear view as he attempts to secure his first ever Pro championship aboard his Barrie Trim/Scot-Build BMW S1000RR.

“That was a lot of fun. Obviously it’s a little disappointing, but we tried really hard to pull it out at the end and win the last one here at St-Eustache,” said Young. “The BMW was working great as it always does, but Jordan is just so good around here, so it worked out well for everyone and we’re looking forward to the rest of the year.”

The duo will now prepare for a pivotal trip to Atlantic Motorsport Park next month, a circuit Szoke has won the last seven contests at, with three races completed and four left go in the 2019 campaign.

Completing the podium for the second consecutive race was Mississauga, ON native Trevor Daley, who continues to impress aboard his Parts Canada/Fast Company Suzuki GSX-R1000R as he climbs to third in the standings through three rounds.

“The launch control has been working so well on the Suzuki that I got a little ahead of myself on the start, but I knew if I got a good run down into turn one I would be able to hang with these guys for a bit,” Daley said. “I knew they were faster than me so I ended up just riding consistent at my own pace, and I just wanted to bring it home to pick up some meaningful points for the championship.”

If not for a tough start, Daley could have come under a lot more pressure from fourth-place finisher Samuel Trepanier, as the St. Isidore, QC native mounted a late charge aboard his Blysk Racing BMW but was unable to close the gap in the final stages.

Rounding out the top five for the second time this season was Peterborough, ON youngster Tomas Casas, who continues to put together one of the best two-class seasons in recent memory in his first year aboard the Parts Canada Yamaha YZF-R1.

The top rookie of round three was Vincent Levillian out of Montreal, QC, who climbed to third in the season-long Brooklin Cycle Racing Pro Rookie of the Year award fight aboard his Turcotte Performance Kawasaki ZX-6R Ninja.

It was a dominant effort from two-time defending champion Casas in the Liqui Moly Pro Sport Bike class, as the 20-year old phenom pulled back within the title hunt with a four-second victory over points leader Will Hornblower.

Both the Parts Canada Yamaha YZF-R6 of Casas and the privateer Yamaha of Hornblower got off to less-than-ideal starts, but it took the reigning champ just a handful of turns to snag the lead and begin to pace the field.

“The plan was to get a good start, and I was able to get out front on the first lap so I wanted to pull ahead, but I couldn’t shake these guys so I knew I had to put my head down and ride really hard,” said Casas. “The Parts Canada Yamaha was just amazing, and the Dunlop tires were working really well too, so it was important to pick up the win and keep fighting for the championship.”

The Sarnia, ON native of Hornblower needed a few laps to work his way up from fourth, and by then it was too late to catch Casas as the race was all but settled only a few laps in.

“It was a bit of a bummer to not be fighting up front. I had to work really hard to move up the field, and by the time I got there Tommy was gone,” Hornblower said. “I tried to catch him but it just wasn’t going to happen, so I settled in and brought home some points which is always a plus.”

Joining the duo on the podium was fan-favourite Sebastien Tremblay out of nearby Mirabel, QC, who battled through a broken collarbone to finish third aboard his Turcotte Performance Kawasaki ZX-6R Ninja at his home circuit.

Despite the intense rivalry between Casas and Tremblay, the former took a moment to commend his counterpart, applauding his iron-man like performance as he battled through the injury to join them on the podium.

Tremblay emphasised his struggles on the podium, as he scored the best finish of his difficult campaign to get himself back into the points fight.

“The start was really hard, but it got a little easier as the race went on and the pain went down,” said Tremblay. “I was able to catch the guys ahead of me and get up to third, which should help us get back into the points a little bit.”

The TSN Motorcycle Experience Lightweight Sport Bike championship got turned on its head on Sunday, as local favourite Alex Berthiaume completed the weekend sweep but it was second-place finisher Ben LeClair taking over the points lead.

Berthiaume, riding a Yamaha Laval YZF-R3 out of Laval, QC, quickly took over the race lead from former points leader Avery Hart, who had been having a nightmare weekend aboard his WRBF Racing Yamaha out of Princeville, NS.

However, it wasn’t long after Berthiaume moved into the lead that Hart suffered a heartbreaking mechanical failure, ending his race and inspiring the Blackstock, ON teenager of LeClair aboard his bLU cRU Yamaha.

LeClair, who lost out on second place to Keegan Gaudet after a last-lap pass on Saturday, returned the favour with almost an identical pass on the WRBF Yamaha youngster out of Ellerslie, PEI to secure a ten-point lead in the championship.

“That last lap was really touch and go, but I knew I had to try something if the opening was there,” said LeClair. “I didn’t really expect to leave here with a championship lead. It sucks for Avery, but it should make for really great racing in Calabogie next weekend.”

The Lightweight class will head to Calabogie Motorsport Park next weekend for a special round alongside the VRRA, where Hart will look to reclaim his championship lead before returning home to the East Coast for round four.

It was also a championship-changing result in the Mopar Express Lane Amateur Superbike class, as Guillaume Fortin took over the points lead with a victory at his home track aboard his Turcotte Performance Kawasaki ZX-10R Ninja.

While the Blainville, QC native already held a race lead for much of the contest, his gap got bigger when former points leader Dave Natale was involved in a turn two collision, though the Markham, ON native was able to pick up his Aprilia RSV4RR and finish 16th.

It was the opposite outcome in the Parts Canada Amateur Sport Bike class, as championship leader Christian Allard extended his gap with a dominant win over Jake LeClair at his home track.

The Chambly, QC native added to his team’s successful weekend aboard his Turcotte Performance Kawasaki ZX-6R Ninja, winning by over nine seconds, while the Blackstock, ON native of LeClair will settle for a 12-point deficit aboard his bLU cRU Yamaha YZF-R6.

The Lightweight class will now head to Calabogie Motorsport Park in a matter of days for their special bonus round, before joining the rest of the CSBK tour for round four at Atlantic Motorsport Park just outside of Halifax, NS next month.

Full results from the weekend’s action, as well as information regarding future rounds of the 2019 season, can be found on the series’ official website at www.csbk.ca.