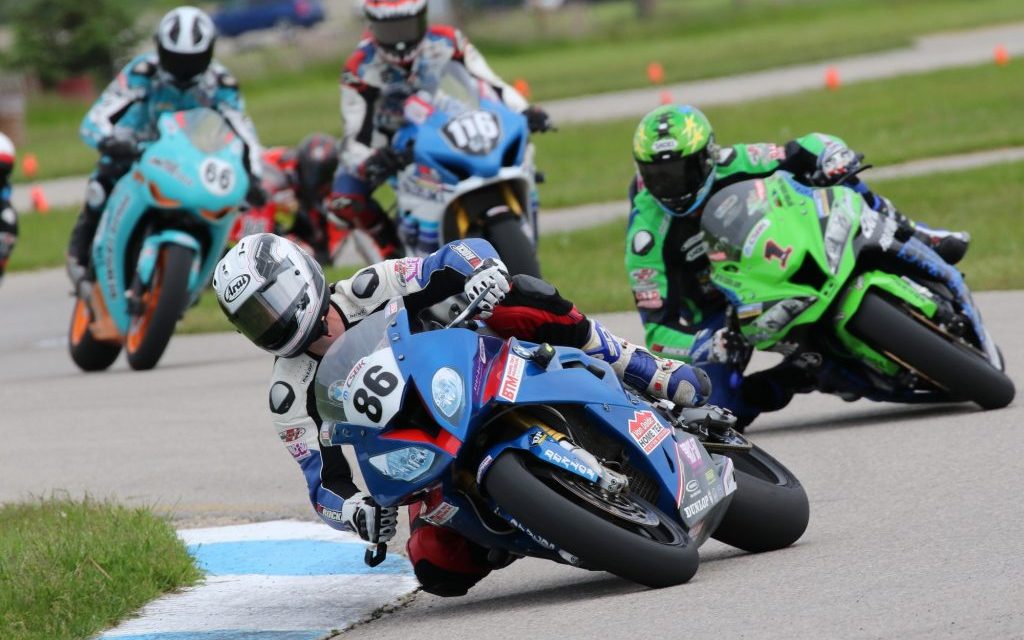 The Mopar Canadian Superbike Championship continued to produce stellar racing on Sunday, just as Ben Young continued his success at the forefront of the series, winning in round two at the Grand Bend Motorplex to extend his points lead in the Mopar Pro Superbike feature class.

After losing last year’s race at Grand Bend to rival Jordan Szoke after a daring pass in the final corner, it seemed like the situation would repeat itself on the final lap on Sunday. After running into lapped traffic, Szoke had appeared to snatch the victory from Young yet again, only for the Collingwood, ON rider to emerge first out of the final corner aboard his Van Dolder’s Home Team/Scot-Build BMW S1000RR.

“It was such a great race. I had Jordan right there behind me the whole way, so I knew it was going to come down to that final corner yet again,” said Young. “The BMW was dialed in, and the Dunlop tires worked great right to the end, so it was on me to just work really hard and try to hold him off. It’s another great opportunity for the championship, so we’re all looking to keep the ball rolling and get on with round three.”

The win makes a perfect 112 points for Young through two races, having finished first in every session so far this season, as four-time defending champion Szoke now finds himself trailing by 29 points entering round three at Autodrome Ste. Eustache.

However, the Lynden, ON veteran remains confident despite the unfamiliar territory, as Szoke and the Mopar Express Lane Kawasaki ZX-10R Ninja team head to arguably their best track on the calendar.

“I thought I had him at the end, and I was planning something the whole way, but I just went in a little too deep and he was able to duck underneath me,” explained Szoke. “It’s a tough break, but we made some steps and we’re scoring points. This was one of Ben’s strongest tracks, but now we go to maybe my best track from the last few years in Ste. Eustache, so we’ll keep plugging along and the wins will come.”

The win marks four-consecutive losses for Szoke in the feature class dating back to last year, the longest such streak since Brett McCormick’s championship season all the way back in 2011.

Joining the two front-runners on the podium was Fast Company/OneSpeed Suzuki GSX-R1000 rider Trevor Daley, as the Mississauga, ON native scored his best result since round three in 2015.

Daley has ground to make up in the championship after crashing and finishing 13th in round one, but was able to bounce back on Sunday after running at the front for a number of laps, setting the fastest lap of the race in the process.

“We’ve been riding really well all weekend, setting a lot of strong, consistent laps, and I had the pace early on to hang with them,” Daley said. “The Suzuki held up great, but unfortunately the tires got a little greasy towards the end which forced me to slow up a bit. But it’s been a while since I was up here [on the podium] so I can’t complain.”

Equally as impressive was local youngster Stephen Nickerson claiming his best career finish in fourth place, as the Hamilton, ON rider placed his DeWildt Honda Powerhouse CBR1000RR inside the front group early on and never looked back.

Rounding out the top five and surviving a late charge of his own was Beaconsfield, QC veteran Michael Leon, who was able to rebound from a round one crash aboard his Royal Distributing BMW despite a late effort from Peterborough, ON youngster Tomas Casas and his Parts Canada Yamaha YZF-R1, who finished sixth.

The top rookie of the day was Breslau, ON youngster Dylan Bauer, who featured prominently in the Sport Bike category but was able to finish a respectable tenth place in the Superbike class aboard his Yamaha YZF-R6.

As for the Liqui Moly Pro Sport Bike class, it was a dramatic finish that saw Mirabel, QC rider Sebastien Tremblay win his first race of the season in unusual circumstances, having been involved in a collision with Bauer that caused a red flag stoppage and an early end to the race.

Tremblay is provisionally listed as the race winner aboard his Turcotte Performance Kawasaki ZX-6R Ninja, with Bauer finishing second for his best career Pro finish, though results are subject to change from CSBK officials in the coming days.

“It’s great to be up here celebrating the win, even though you never really like to win like this,” said an injured Tremblay. “It gets us back in the championship which is huge, so you can’t really complain with the result, despite it ending in a tough way.”

Rounding out the podium was two-time defending class champion Casas, who crashed out in round one but bounced back with a strong finish aboard his Parts Canada Yamaha YZF-R6 machine.

“We managed to get some points, maybe not in the way we wanted to, but either way it helps the championship,” said Casas. “The bike felt pretty good, and the pace was definitely there, so hopefully we can keep things going at Ste. Eustache.”

Race one winner and points leader Will Hornblower just missed out on a return to the podium at his home track, but the Sarnia, ON native was still able to piece together a strong finish aboard his Yamaha and keep the title hopes intact.

The fourth race of the season in the TSN Motorcycle Experience Lightweight Sport Bike class was perhaps the most spread out, with championship leader Avery Hart extending his points hold with another dominant victory.

The Princeville, NS rider once again left his opponents early and went into cruise control, expanding his lead to 40 points aboard his WRBF Racing Yamaha YZF-R3.

“It was a perfect weekend, we scored the most total points we could get, so obviously it’s been a lot of fun,” Hart said. “It was my first time ever at this track and I won both races, so hopefully I can keep some of that magic going in round three.”

Finishing at the front of the battle for second was Strathroy, ON teenager Trevor Dion, who claimed his best ever National finish aboard his Kawasaki Ninja 400, with Alex Berthiaume and his Yamaha machine completing the podium out of Laval, QC.

Express Lane Amateur Superbike points leader Dave Natale stuck with the theme of extending his lead, winning again in round two aboard his Aprilia RSV4RR out of Markham, ON to take a commanding 33-point lead in the early going.

Meanwhile, reigning Lightweight champion Jake LeClair scored his first win since graduating to bigger machinery, as the Blackstock, ON teenager stormed to a comfortable win aboard his bLU cRU Yamaha YZF-R6 to pull himself within one point of championship leader Christian Allard, who finished fourth aboard his Kawasaki ZX-6R Ninja out of Chambly, QC.

Full results from round two’s racing, as well as information regarding round three at the Autodrome Ste. Eustache on June 21-23, can be found on the series’ official website at www.csbk.ca.