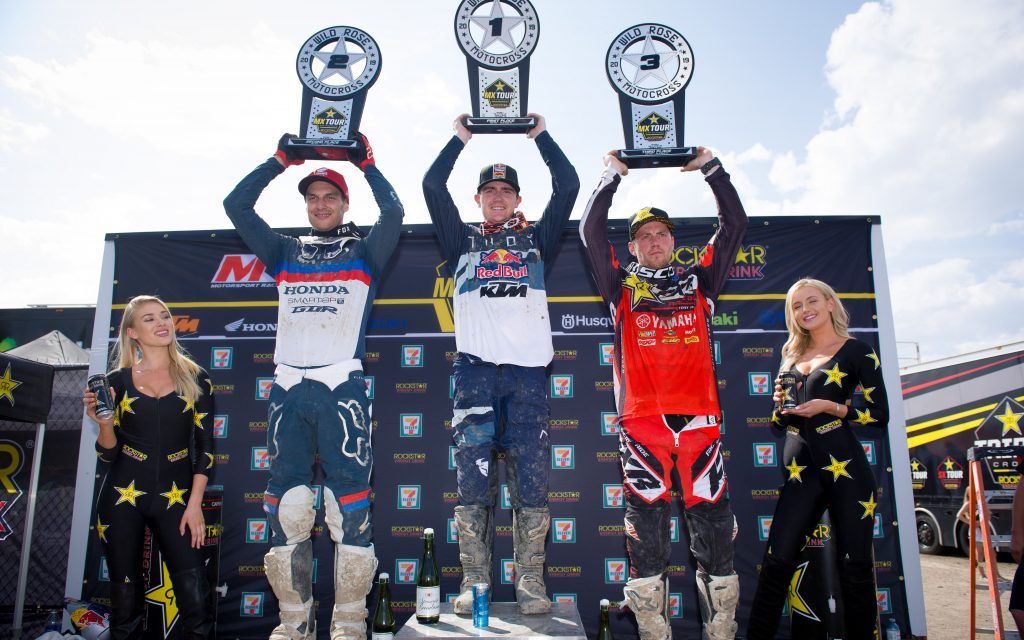 The KTM Red Bull Thor Factory Racing Team had a successful start to the outdoor season on Saturday. Cole Thompson finished the day on top of the podium with an impressive first place finish in the 450 pro class. After finishing third in Moto 1, he really got on the gas and turned things around in moto 2. He made the pass into first in lap four and didn’t look back. Thompson will have the red plate going into round 2 in Prince George this coming Saturday.

Cole Thompson – KTM Red Bull Thor Factory Race Team 450 Rider: “I’m so pumped to win the overall at round 1. Started my day by qualifying the fastest, then Moto 1 had to battle hard for 3rd. Regrouped for Moto 2 and put in my best performance by passing all the top riders and grabbing the win! So happy to give back to my team what they deserve for all their hard efforts and looking forward to a great MX tour.”

KTM Red Bull Thor Factory Racing Team Members Tanner Ward and Jess Pettis had successful performances in the 250 class. The duo fired out of the gate and got up front right away. Tanner landed on the podium in Moto 1 with Pettis close behind. The two finished the day in 5th (Tanner Ward) and 7th (Jess Pettis).

Tanner Ward – KTM Red Bull Thor Factory Race Team 250 Rider: “It was a good day for me, a lot of positives to look at. A small mistake in the second moto cost me an overall podium, but happy to start the season on the right foot!”

Jess Pettis – KTM Red Bull Thor Factory Race Team 250 Rider: “Round 1 is in the books and I am happy with how it turned out, with the position I am in. I have been dealing with an arm injury for the last month and haven’t had much time on the bike. Having been able to get two holeshots and salvage some good points with 5-7 moto scores was a win in my eyes. I am excited to heal a bit more and move onto the next round.”

In the WMX class, KTM swept the podium. Avrie Berry from Washougal, WA went 2-1 for 1st overall. She was followed closely by Canadian Orange Bleeders Shelby Turner and Eve Brodeur who finished in 2nd and 3rd respectively.

On behalf of everyone here at KTM Canada, we want to extend a big congratulations to all KTM riders mentioned for their impressive performances. #READYTORACE

The MX series will continue next weekend in Prince George for round 2 of the 8 round series.