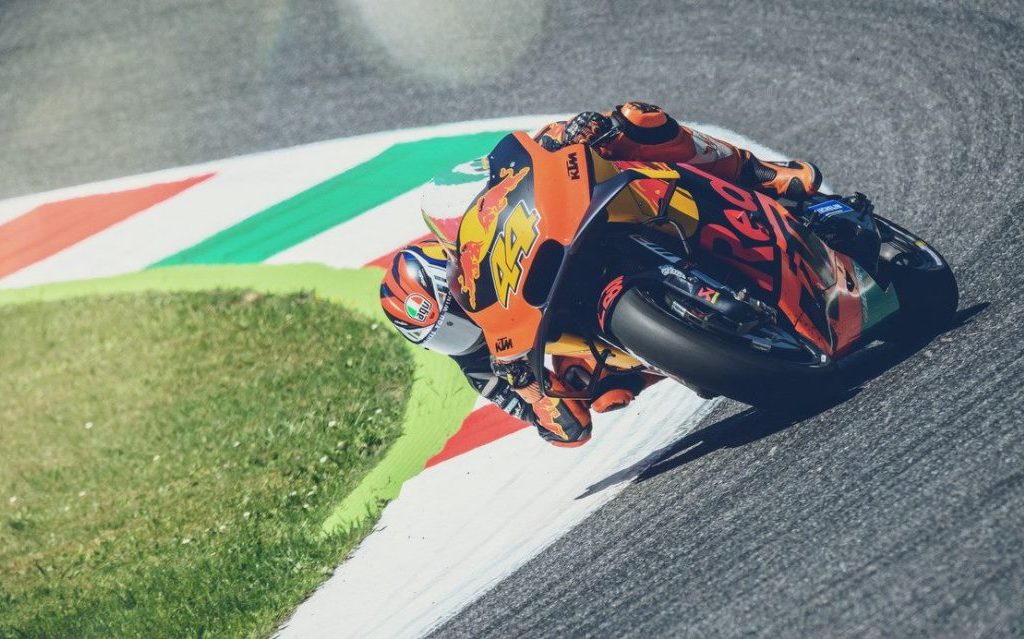 The hottest day of the Gran Premio D’Italia at Mugello saw ambient temperatures top 30 degrees and hit a track figure of 50 degrees for 23 fast and demanding laps of the Italian course for the sixth MotoGP fixture of the season.

Starting from 11th on the grid, Pol Espargaro attached the #44 machine to the back of the second group and fought with other factory riders on the fringes of the top ten. Crashes for the likes of Francesco Bagnaia and Jack Miller opened up the dispute for the top of the leaderboard and Pol maintained his speed in fine fashion. The Spaniard attacked Fabio Quartararo on the final lap and passed the Frenchman for 9th place: his fourth result inside the top ten this season and – once more – a much faster total race time compared to 2018.

Johann Zarco chose a Soft rear tyre in order to circulate at his best speed in the first half of the race. The Frenchman suffered in the last stages as the grip level of the rubber deteriorated in the heat and he classified 17th; nevertheless with more understanding and information of his #5 machine ahead of the next round in Catalunya which will be followed by two days of testing.

Red Bull KTM Tech3’s Miguel Oliveira just missed the points with 16th spot by the chequered flag. Teammate Hafizh Syahrin pulled into the pits after several near-crashes and chose not to complete the race.

Pol Espargaro: “We knew our position would be around 7-10 and we were not expecting these temperatures. With the Medium tyre we were in a very low grip situation and we knew our job would be a little bit harder. I was fighting a lot at the beginning of the race with [Franco] Morbidelli, [Alex] Rins even and [Fabio] Quartararo. It was hard, hot and with many changes of direction. It was a physical track and we saw many riders by the end were dropping and we could keep our pace. Anyway we were fourteen seconds faster in our total race time in 2018 and in the end I think we can be happy.”

Johann Zarco: “I wanted a bit more consistency so I chose the Soft tyre but by the end it was finished. I wanted to be able to fight at the beginning and understand what my opponents can do better than me or not. I was able to get some good information even though I suffered at the end of the race and I finished slowly. We know we are suffering and I must wait to have some new things on the bike. I know I need to change my style but even by trying to do this I have the same limits as before. We can only get better from here and now I have six months experience. I think the team has good information for the way to work.”

Miguel Oliveira: “It was a tough race in the beginning and hard to manage the bike with the full fuel tank. Then I started to find my pace and it was quite OK. The last five laps where very difficult again as I was missing grip and I could not manage to attack the points scoring positions. But, in general, the gap to the front was not too big and also the one to Pol was not huge. After the tough weekend, I think we didn’t expect to be so competitive in the race, so it was positive.”

Hafizh Syahrin: “I felt very good with the bike in the beginning of the race but in Turn 9 I had a huge low side and was lucky to save this. I tried to push again but couldn’t find the same feeling as in the beginning. I wanted to do more laps but with this feeling it was impossible not to go down, so I decided to retire. It’s a pity, especially because I’m convinced that we could have scored points here but sometimes this just happens. Even if this was not our day and I’m truly sorry for everybody, we keep working hard for the next race. Barcelona is my favourite track, so I will for sure give more than 100 percent again.”

Mike Leitner, Red Bull KTM Team Manager: “A top ten was the target for us and we achieved that here with Pol, which was very good. A positive point was that the bike had good potential all weekend. Mugello and Barcelona have been difficult tracks for us in the past and with our current package, so to make the top ten so far is very good. With Johann we made some improvement on Friday but he crashed on Saturday and took a gamble with tyre choice for the race, and the Soft rear could not stay until the end. We’ll be looking forward to trying for another top ten in Catalunya.”

The Moto2 Grand Prix belonged to Alex Marquez for the second time in a row. Red Bull KTM’s Brad Binder rounded off a difficult weekend with the final point for 15th position and one slot ahead of teammate Jorge Martin. Tony Arbolino won in Moto3 for the first time in his career and by the slimmest of margins from Lorenzo Dalla Porta after a frenetic race-long chase involving a big group of riders. Jaume Masia took his Bester Capital Dubai KTM to 3rd for his third podium result of the season and remains in contention for the Moto3 crown after six rounds. KTMs filled seven positions in the top twelve.

MotoGP moves across to Spain for the second time this season with the popular Gran Premi de Catalunya at the Circuit de Barcelona-Catalunya taking place in two weeks time.