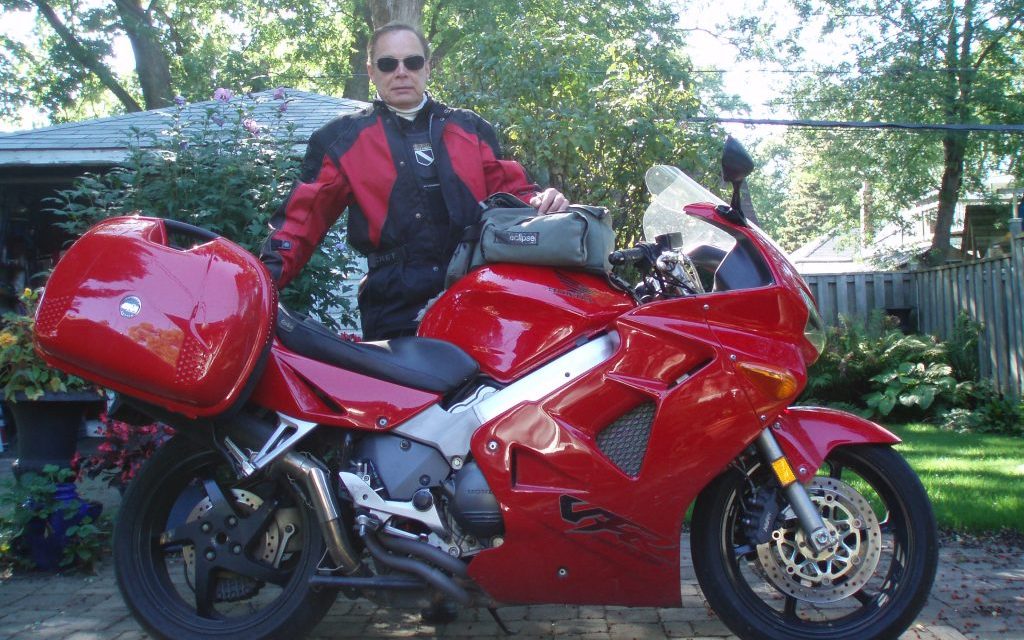 My journey in motorcycling started 40 years ago when a friend said, “Why don’t you just buy a bike? You’re always looking at them and talking about them. What’s stopping you?” She had a point. I had ridden a Yamaha 100 Twin Jet when I was 16 (CC Aug. 2004) and sold it to go to school. Even though I loved motorcycles, I had left the itch unscratched for more than a decade.

What followed has been a succession of bikes that matched my evolving taste and skill level. A Honda 550-four lasted a few years and made a wonderful noise with its Kerker pipe. It was traded on a Honda 750F which had been bored and kitted out with a bunch of parts off a 900F including pegs and aftermarket shocks. Next came a BMW K100 which I owned for perhaps a season. Although it was a fine bike it really seemed to come into its own at about 135 km/h, which spelled trouble for me and my license. It got traded for an FJ1100 Yamaha.

The FJ was often called a “gentleman’s tourer” and while I was certainly no gentleman, I did use it to tour Ontario and often on trips to Muskoka. It was on one of those trips that it accompanied me into the ditch off Highway 11, where I woke up with a broken collarbone, talking with a guy who had stopped to help. I had no recollection of the crash, and the FJ needed more than $4,500 in parts replaced.

I owned the Yamaha for more than a decade before I sold it and bought my current bike, a Honda VFR. It now has about 110,000 kilometres on it. But here’s the unusual thing: even though I owned some bikes that would be wonderful travelling companions, I have never really spent a lot of time on trips beyond Muskoka, Haliburton or the Niagara Peninsula. Until recently.

Perhaps 10 years ago, an article in Cycle Canada (perhaps the famous Fall Tour) highlighted the wonderful roads in Pennsylvania. A bit of research revealed some likely candidates and I was off. Sure enough, they were way better than the roads in southern Ontario, and there were more of them. I went back several times, and then continued to explore further east into Vermont, New Hampshire and Maine with my wife (CC Feb. 2013), or with my friends. Furthest east was a trip to the Cabot Trail on which we rode into a 60 km/h headwind in the pouring rain. A highlight for all the wrong reasons.

In 2015 I rented a BMW F800R and rode in Europe for a month. I got the bike in Nice and did a big loop through the Alps, the Auvergne, the Pyrenees and Provence. It was an exceptional experience and revealed to me the full range of experience available on a motorcycle. There is nothing quite like the challenge of riding a bike up a narrow mountain road, noticing the complete lack of guardrails between you and a 500-metre drop. And there is nothing quite like the reward of a hot shower after arriving safely at a small country hotel.

During 2016 I agonized about returning once again to Europe. I had very mixed feelings. Although I was very confident in my ability, and proud of having ridden on difficult roads for more than 2,000 kilometres without incident, I did wonder how long my luck would hold. With 40 years of riding under my belt, and only one major crash, I started to wonder if I was pushing the odds by continuing to ride into my seventh decade. At one point, I decided that I would sell the VFR and use the money to rent a car and tour in greater safety and comfort. After 40 years, I had more or less decided that my journey through motorcycling was over.

During my years with the Honda 750F I would often see an older guy riding a BMW to work. He was the friend of my friend’s father, so he was probably 60 at the time. I recalled how much I admired him for continuing to do something he loved, when common sense and reason told him to stop. It surprised me to realize that I was now that old guy riding when he might be better to quit. And it surprised me to realize that my passion for riding continued unabated.

So my journey with motorcycling continues, metaphorically and literally. This summer I’m returning to Europe, with a 2014 Honda VFR shipped through Air Canada. I’m looking forward to riding there this season, and probably next year too, before I will likely have to make a decision about how much of the journey remains.