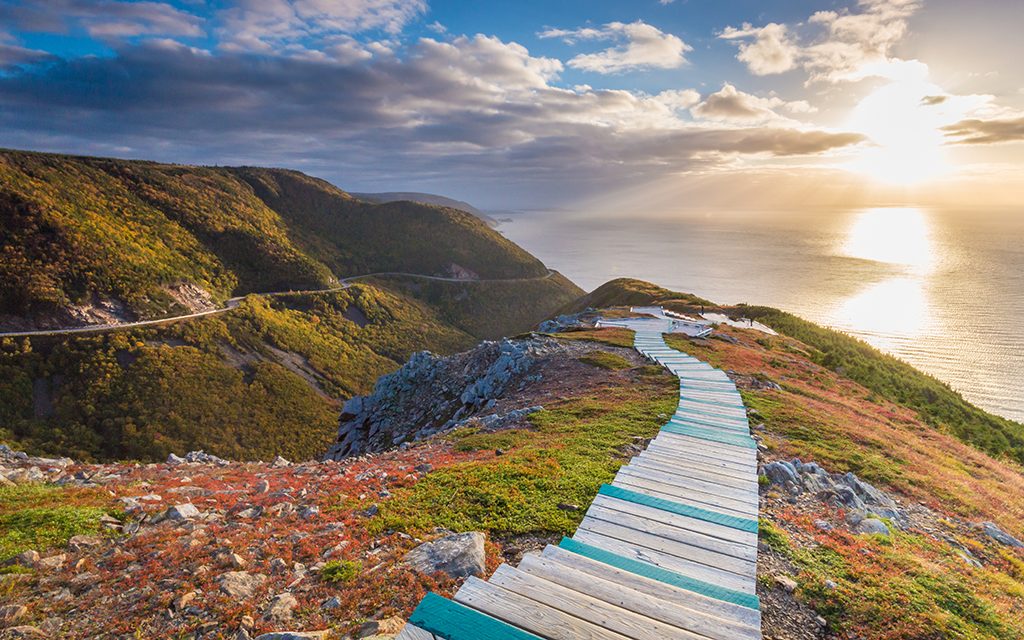 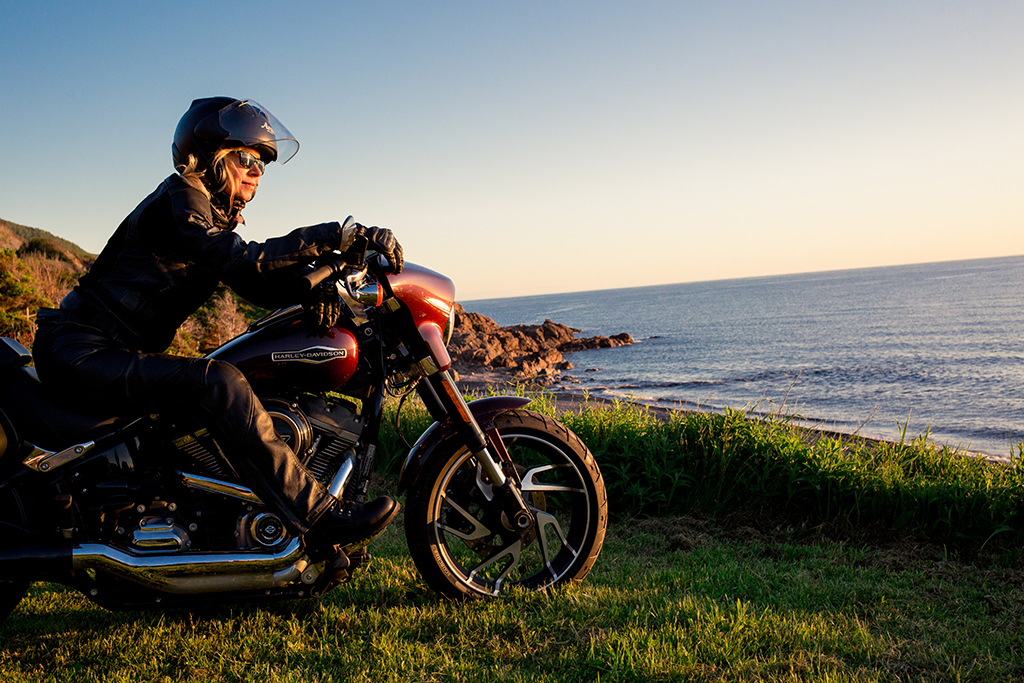 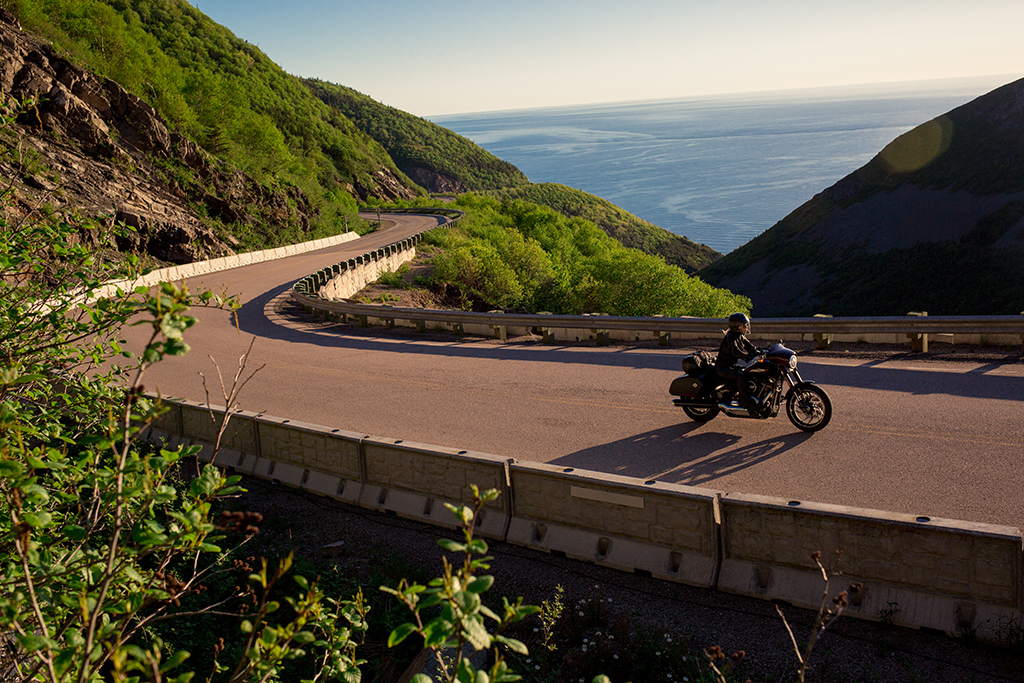 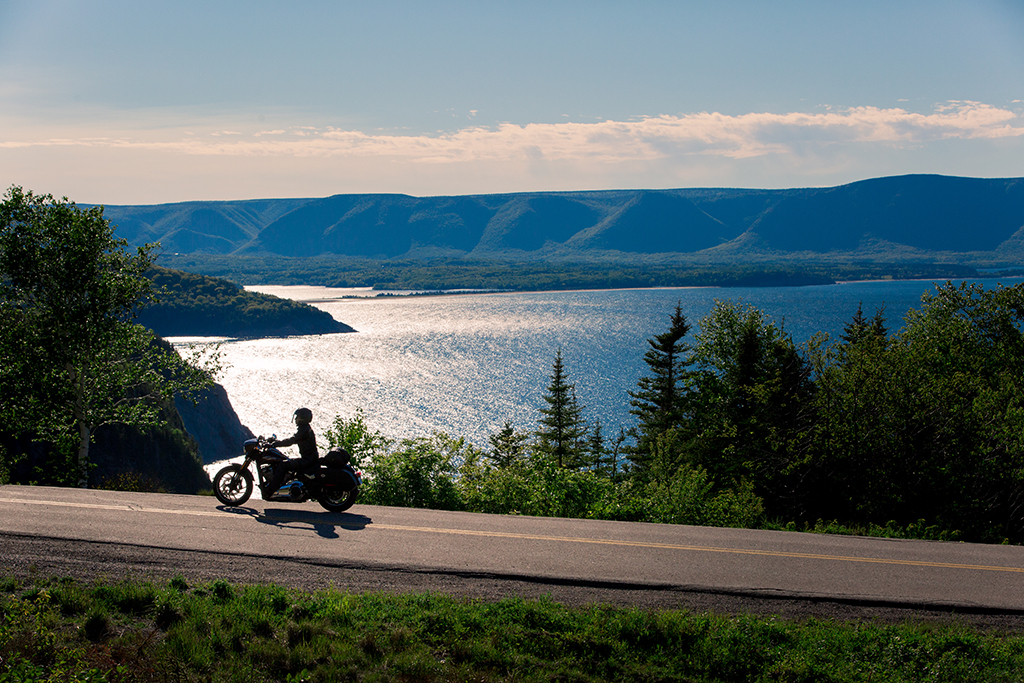 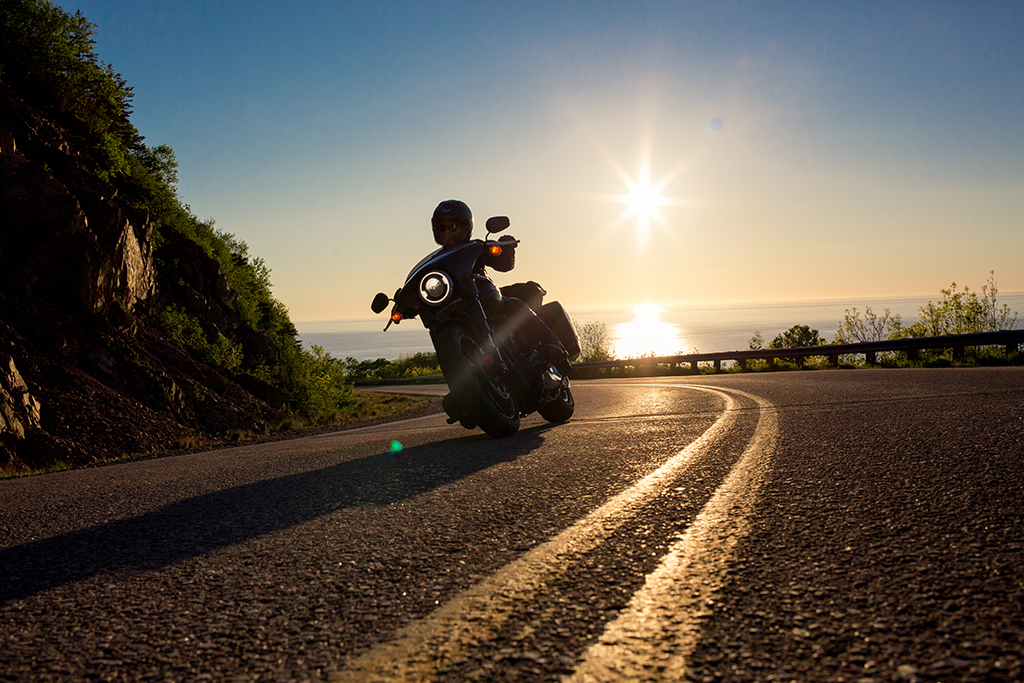 Adventure on the trail

Riding the east coast’s Cabot Trail is a sensation

I once lived in Nova Scotia on an 18-month work assignment. And it was during this time I took the motorcycle training course in Dartmouth, learned to ride and got my license. It was this very place my lifelong passion of “all things motorcycling” took flight. And now, three decades later, I’ve returned to Cape Breton Island to capture the motorcycling experience I missed out on all those years ago, the Cabot Trail.

My odyssey starts about 28 kilometres south of the 298 kilometre long Cabot Trail. I’m up early after a two-day trek from Toronto, taking in the dazzling view of the Whycocmagh Bay waters from my cabin deck at the Keltic Quay Lodge. I make my way over to the main cottage for breakfast. My tour guide Daniel Ross, known as the “Cabot Trail Biker,” wearing his trademark pirate skull and crossbones Cabot Trail t-shirt, greets me exclaiming “Welcome to the Cabot Trail tor!” It’s spoken with a Maritime dialect that’s noticeable to a mainlander like myself. There’s no one quite like Daniel: not only is he an avid motorcyclist but he is a true present day Cabot Trail ambassador. He has made it his mission to help motorcyclists arriving from around the world make the most out of their Cabot Trail ride. I was in the best of hands!

With my Harley packed, I take my place amidst the group of 14 other riders. We ride east to the Eskasoni First Nation Indian Reserve on Goat Island where the Mi’kmaq people made their home. It’s a culture dating back some 10,000 years and it’s the largest Mi’kmaq community in the world. Furthermore, it was the meeting of John Cabot and the Mi’kmaq at Aspy Bay over 500 years ago that formed the base of the Cabot Trail’s meaning and represented the first European settlers of Cape Breton Island.

After parking our motorcycles we walk through a reconstructed experience of earlier Mi’kmaq life. Our Mi’kmaq guide Faye starts us off with a smudging ceremony. It’s a smoky spiritual cleansing technique which calls upon spirits of various sacred plants to drive away negative energy and ensure protection. So after a bathing of smoking sage, we exit the small space of the tepee. Walking further along the trail we’re shown how to build a spear for fishing, a hut, and even a small basket out of sweet grass. At the end of the tour we nibble on homemade bread drizzled with molasses and sweet butter, and it’s delicious. 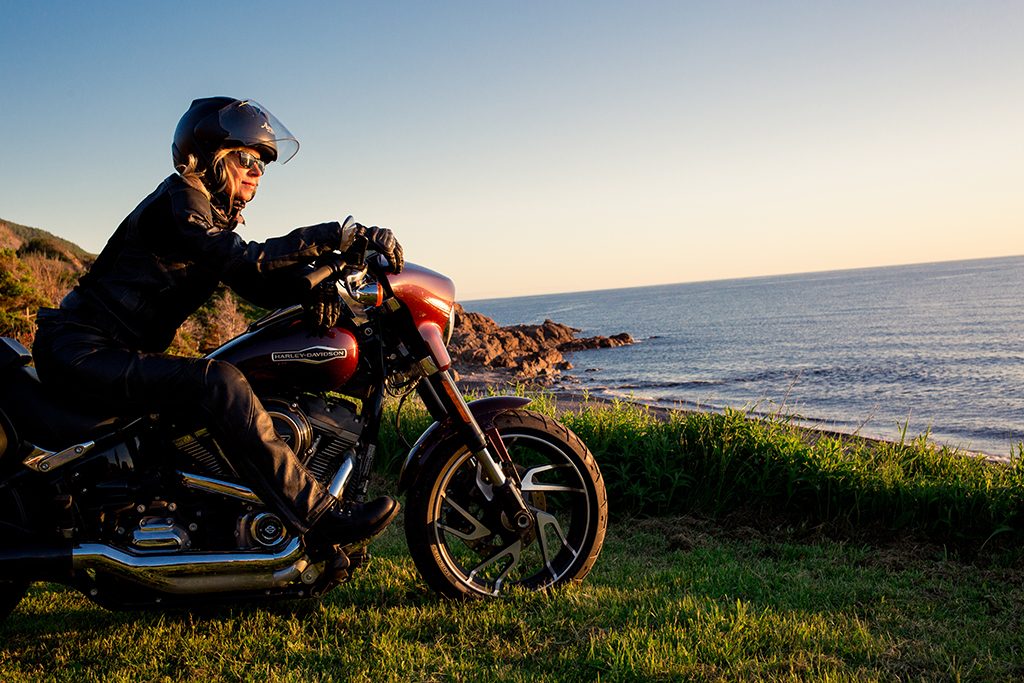 “I think to myself, this is going to be fun!”

We’re on our way again riding west about 100 kilometres to Mabou, the “place where two rivers meet.” The hour-long ride takes us along the northern shore’s Bras d’Or Lakes where the roads are lined with plush woods shimmering in emerald hues from the prior day’s rain. The clearings are accented with colourful maritime cottages and pointy-topped church steeples in true Acadian style. We cross Seal Island Bridge up Kelly’s Mountain to stop at its scenic outlook. Overhead an enormous eagle appears commanding the mountain’s wind currents. I get very excited as finally I see an eagle! My Nova Scotian memories are coming back to me, those of its natural splendours.

“Has anyone heard of the Rankin Family?” asks Daniel, referring to our evening ahead at the Red Shoe Pub. “They’re the renowned group of singer-songwriters who own the local establishment named the Red Shoe Pub,” he adds. “It’s in the village we’ll be overnighting it at. We’ll join the locals for an evening of folklore singalongs.” He smiles and tightens his helmet for departure. I think to myself, this is going to be fun!

After the fine food, friendly Red Shoe Pub folk and an unforgettable day’s riding, I toss open the Mabou River Inn’s windows and indulge in a little more music. The night sounds from the riverside sing me to sleep.

Next morning we’re riding north along the Ceilidh Trail (Gaelic meaning “a visit”). The ride takes us through a road of long sweeping corners and more hilly backdrops of green forests. The “Acadia” culture is evident in the stylings of the farms and cottages we pass. Up ahead the road comes to a large body of water and goes left and right. And there at this intersection stands a large, azure blue sign: “The World Famous Cabot Trail.” We have arrived. 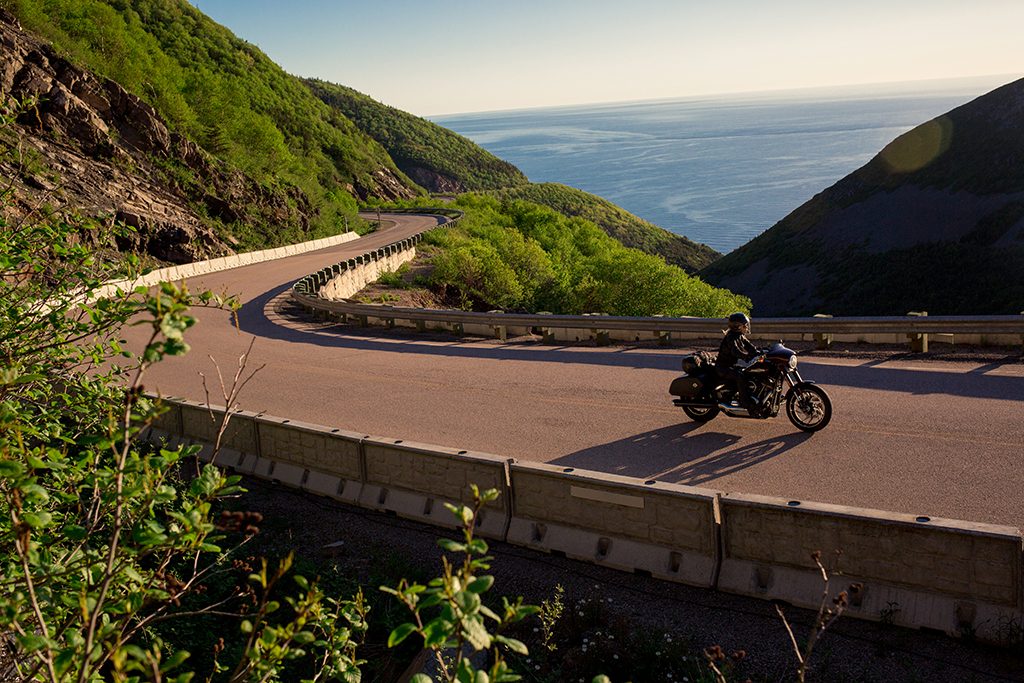 It’s 7:30 a.m. I’m packed and waiting roadside, ready for the Trail’s world famous curves. I stand staring at the road ahead. It banks hard left and disappears beyond the Cape Breton Highlands National Park entrance. Sipping on my mug of coffee from the Cheticamp Cornerstone Motel’s office coffee pot I see a hummingbird sip sap from the feeder and continue to imagine what lies beyond that disappearing left. From the other direction I hear the low growl of approaching motorcycles. My group pulls in from breakfast a few kilometres south. I join in and we head up the Western Trail coast, immediately into the Cape Breton Highlands National Park. We’re taking The Trail clockwise, eventually passing through its northernmost point.

Just a few kilometres into the highlands and the climb begins. A little further and the road moves closer to the shore’s edge, leaving us towering above the Gulf of St. Lawrence waters. The road curves along all the while overseeing the span of water ahead. It is truly a spectacular sensation with a view that’s all that you could wish for.

Now riding up French Mountain en route to the Skyline Trail, another super fun road and a real kick in itself navigating its vertical twists. Once up top, I park the bike and join the group for a hike of about 40 minutes along the trail. There’s a lot of moose here and I can’t help but hope to see one. At the end of the hike is the view of a lifetime, the Skyline, just as it’s named. It’s a steep headland cliff overlooking the Gulf of St. Lawrence. But in the far distance it’s the winding road carved into the mountain’s cliffside which captures my attention the most because that’s next!

Back on the bike and with the group on the Cabot Trail north. Now past Pleasant Bay nearing Dingwall we exit on Bay St. Lawrence Road north connecting to Meat Cove Road. This will take us to the famous Meat Cove lookout and the most northern access road of the island. It’s not a road you can pull up on your device and explore via Google Maps as their vehicles haven’t mapped it yet. It’s a little sketchy to ride with small portions of gravel, tight turns and a steep grand finale. It ends at a cliffside campground and the small parking area of the Meat Cove Chowder Hut just on the edge of the Cove’s drop off. It’s literally the end of the road. 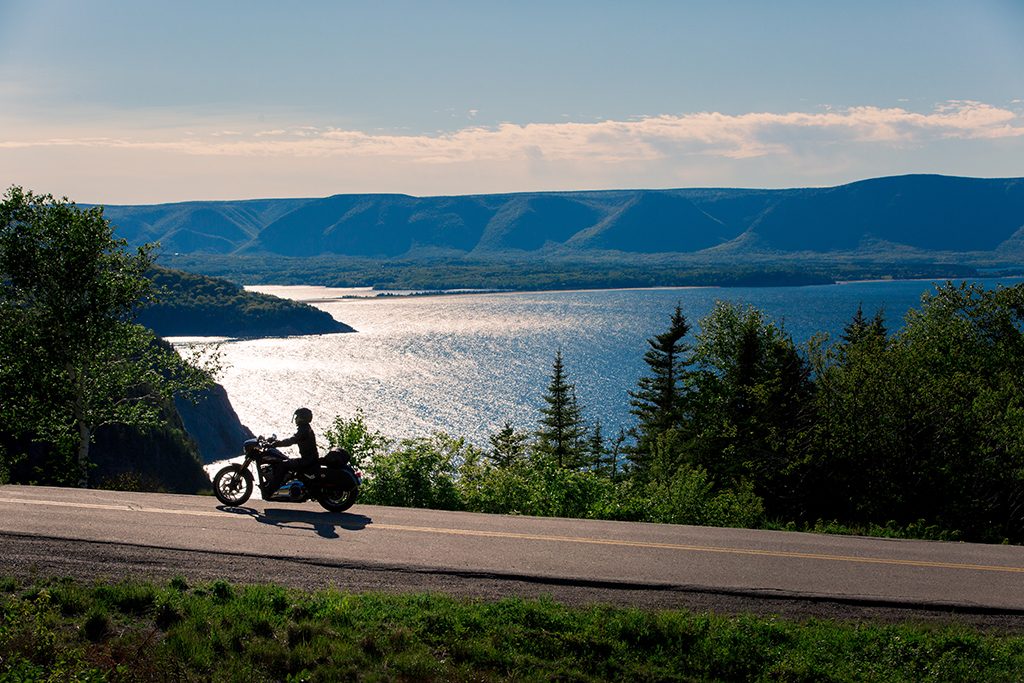 The Trail’s road continues along through Neil’s Harbour and on to Lakies Head where you are served up a full view of the Atlantic coast and of the long stretch of sand, the famous Ingonish Beach. Here is where salt and freshwater meet. But south of the Ingonish Beach is where the most exciting stretch of road begins, the sharp twists of Cape Smokey. Thrilling back-to-back chicane curves that feel more like they were designed for a racetrack. Daniel mentioned that once in fact there was a plan to make the Cabot Trail into a road race circuit similar to that of the Isle of Man. I could see why.

Once up and then down the other side of Cape Smokey heading on to Wreck Cove, we double back to carve the corners through Cape Smokey yet again. Believe me, this stretch of road is any adrenaline junkie’s dream. North to Ingonish we arrive at the historic Keltic Lodge Resort and Spa, built in 1940. It’s our final tour evening on the Cabot Trail and I am feeling the regret of having to leave it already.

The next day’s departure took me through Indian Brook, St. Ann’s and Baddeck where at address #2 Cabot Trail, the Red Barn Gift Shop dominates the intersection. This was it, the completion, the full loop of the Cabot Trail. 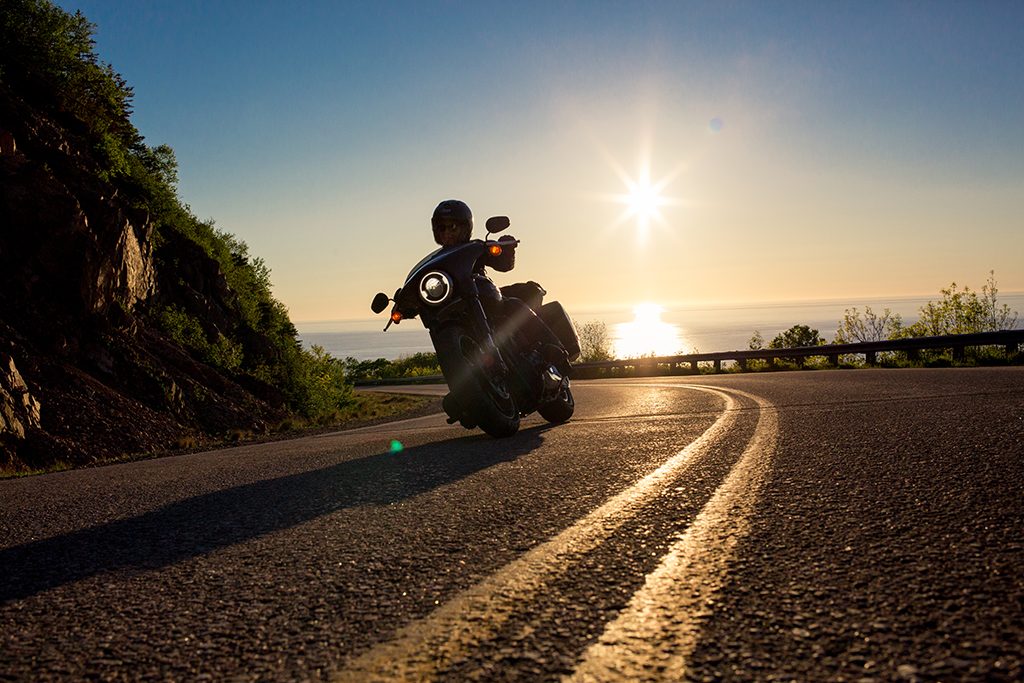 There’s a blending of olden routes and modern passages on the Cabot Trail making it a motorcycle ride experience that’s really quite distinctive. Like any motorcyclist, I’ve always known of the Cabot Trail. And every rider I’ve ever come across who has ridden it always exclaimed, “Oh man, you’ve got to ride the Cabot Trail!” Now I understand why and for my own set of reasons. It wasn’t about the take-your-breath-away views that seem to never end, or the superb cliffside sunsets which stir your soul. It wasn’t even the people and their friendly ways. It was the ride. Its technical aspects, hill climbs, and twisted, blind to sweeping corners — yes, the captivating ride. Now I too will join others and say what they said to me: “You’ve got to ride the Cabot Trail!”