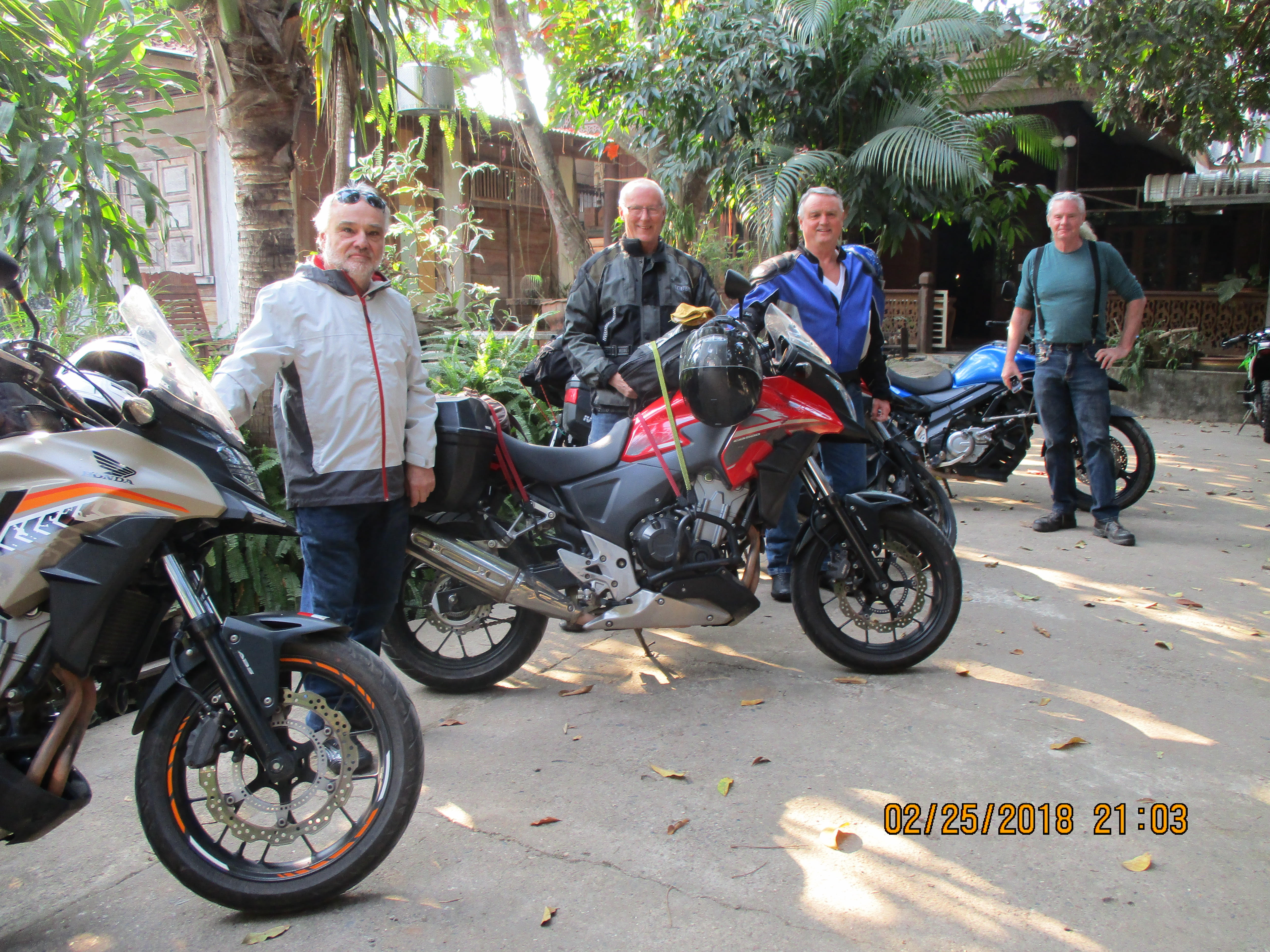 Take four Mississauga, Ontario, high school buddies that share an appreciation of pretty girls, cold beer and motorcycles, and fast forward almost 50 years. Despite each moving to different corners of Canada to pursue careers, marry, raise their children and to retire as senior citizens, they always maintained that keen interest in motorcycling. The setting is now in northern Thailand where many claim the roads for motorcycling are some of the best in the world and it was suggested that a reunion take place to see if it was true. Amazingly, all four wives agree, and we meet in Chiang Mai, Thailand. Tony`s Big Bikes has three Honda CB500Xs and one Suzuki 650 V-Strom fitted with panniers, fuelled and waiting when we arrive, so our eleven days of motorcycling the roads of northern Thailand now begins. Leaving Chiang Mai on a motorcycle is a nerve wracking experience. Driving on the left side, right of way goes to the larger of vehicles, driving in lanes is optional, everyone fights for the same piece of asphalt and a white Honda Civic has just grazed my right front turn signal at speed. Surely the ride will get better, and it does.

The Mae Hong Son Loop is nicknamed “The Road of a Thousand Turns” but my newly acquired T-shirt from Tony`s is printed with “1842 turns.” I choose not to count but I just have to think that the latter is true.

Doi Inthanon is the highest peak in Thailand and the road getting there is a treat. The asphalt looks new with both wide and tight sweepers so the pace picks up and four old men can`t help but feel like teens again. We had decided beforehand not to pre-book accommodation so it’s in Mae Chaem that we search for our first night’s lodgings. Very few Thai signs have English, but eventually we find one that we can read.

Like all Thai people we meet on this tour, our young hosts are friendly, helpful and gracious. When we indicate that we’re both hungry and in need of refreshment they immediately hop on their scooters and make their way into town to shop, returning with their front-mounted baskets full of vegetables for a stir fry with cold beer.

It should be noted that there are many thousands of scooters in Thailand and they are everywhere. The riders are young and old, helmets are mandatory but rarely worn, short-sleeved shirts, shorts and flip-flop sandals are the standard dress. We see one boy riding up a mountain, right hand on the handlebar while texting on his phone with the left and also a mother cradling her baby with one arm and steering with the other. We can’t get used to seeing this, and unfortunately the death rate from motorcycle accidents here is very high.

The scenery in northern Thailand is spectacular and the view from a mountain top looking over the valleys below is breathtaking. The temperature is in the high 30s and if there is burning of the dry vegetation close by there is a haze which makes photography a challenge. Descending a mountain, we brake quickly as police and villagers wave their arms frantically to stop us. Just around the next corner we see the smoke of a flatbed truck engulfed in flames. The local fire department with one pumper is doing its best but soon runs out of water and leaves to refill. It`s hard to watch when a few locals make an attempt with foam fire extinguishers. Soon after a different pumper arrives and the flames are then quickly put out. Carefully, we motor around the smouldering vehicle and are back on our way.

The military junta in 2014 that replaced the Thai government is still in effect so roadblocks are common. They are manned by soldiers or police and randomly check most cars and trucks for drugs, so we`re told. Motorcyclists however are waved through with a smile. Unlike in Canada, you need not worry about a police officer pointing a radar gun in your direction and we speed along those wonderfully winding mountain roads. We continue on to Pia, meet a few avid bikers riding rented Enfields along the way, and we stop to explore the fascinating Lod Caves. Most of the Thai villages we travel through show houses that are in many cases just shacks and roadside stands of oranges, pineapples and bananas are so common that we wonder how these people are able to make a living. Surprisingly, most towns have a very elaborate temple and sometimes a large statue of Buddha as well. Each day the mountain roads are every bit as fun to ride as the previous and our rented motorcycles are up to the task. The CB500X Hondas we ride handle the corners very well and have sufficient power for the steepest mountain road climbs. The Suzuki with its larger displacement needs less shifting and handles equally well, but its rider complains that the rear brake is almost nonexistent.

Travelling in Thailand is very cheap. Our accommodations along the way are in most cases luxurious, have a swimming pool to relax by and rarely cost over forty dollars a night. Food is also very inexpensive and Thai street food is delicious. Gas is about a buck a litre and even the rental cost for our motorcycles was just over fifty dollars a day. The Golden Triangle Rider website (www.GT-Rider.com) contains suggested routes and some excellent maps as well as biker reviews and testimonials. And if travelling alone isn`t appealing, Tony`s Big Bikes offers guided on- or off-road tours as well as rental motorcycle information. Motorcycling the mountains of northern Thailand was a fabulous experience and is a worthy addition to everyone`s Bucket List.