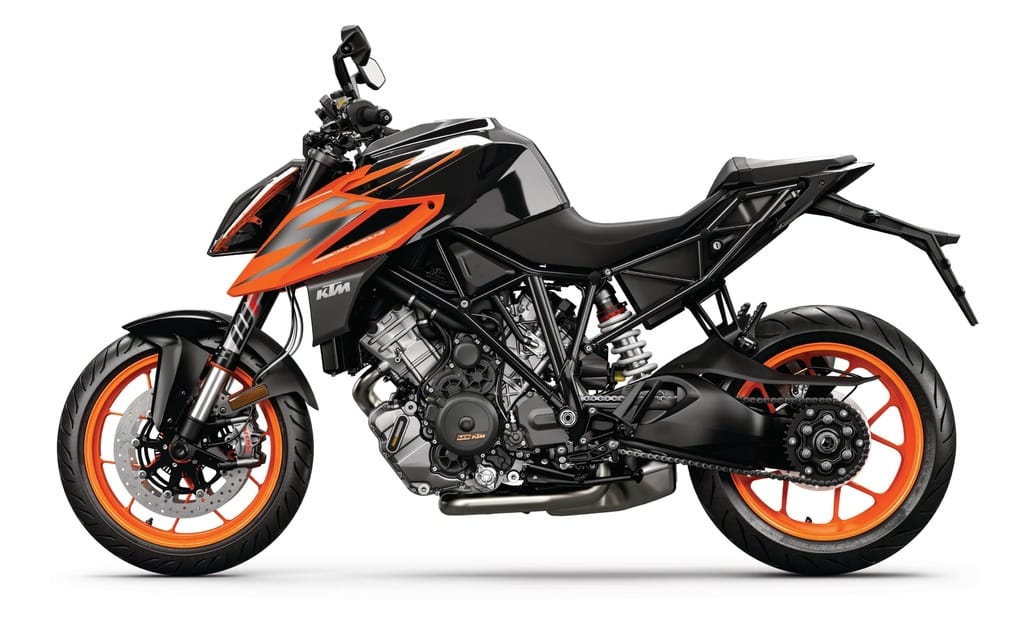 KTM 790 DUKE
The KTM 790 DUKE is devastatingly accurate. With the agility and purity you’d expect from a single, combined with the hard-hitting punch of a twin, the KTM 790 DUKE carves up the road with pinpoint precision. Boasting the all-new, compact 799cc LC8c parallel twin motor – a first for KTM – nestled into one of the lightest frames around, the new KTM 790 DUKE is the most compact twin in its class. The engine was tuned for torque, giving it fantastic rideable power, while maintaining a great top end to match the sporty character of the bike. Power delivery is efficiently controlled by advanced electronics and next-generation rider aids.

Considerable attention was paid to achieving the typical DUKE, riding feeling of lightness, agility and sportiness. Handling is not only agile, but also very precise thanks to geometry developed specifically for sporty street riding. High-quality WP suspension ensures a perfect connection with the road and confidence in the bike at all times, making it impressively easy to race ahead of the pack.

KTM 1290 SUPER DUKE GT
Meet the next generation of the KTM 1290 SUPER DUKE GT. At first glance, the 2019 “GT” betrays the distinct, extremely aggressive base of the 1290 SUPER DUKE R that became famous as the ‘THE BEAST’. Even though it was drafted as a separate model, the GT approaches touring from a sporty angle. No ifs, ands, or buts. And just to let you know up front: the core of the SUPER DUKE GT will always be incredible performance.

This KTM is the cutting-edge interpretation of a sport bike fit for travel. The 1290 SUPER DUKE GT is not a slimmed-down super tourer with racing stripes, it is an extremely sporty real-world champion, which for the first time masters the seemingly impossible split between mountainous twisties, comfortable long-distance highway travelling and breath-taking track day use, thanks to intelligent and innovative design and technology.

KTM 1290 SUPER DUKE R
Hundreds of hours and thousands of test miles firmly cement KTM’s king of naked bikes on the cutting-edge of high-adrenaline motorcycling. Thanks to the sophisticated resonator chambers on the cylinder heads, designed to polish the torque output in the low to mid-engine speed range, the KTM 1290 SUPER DUKE R powertrain runs smoothly while delivering maximum power. Ultimately, it is the seemingly minor details that enhance power, such as the carefully optimized intake flange that alone widens the power band by 500 rpm. Every piece, system, nut and bolt of the SUPER DUKE R wants you to go fast and yet stay in control: the wide, low handlebar, the Brembo monobloc brakes, the MSC including cornering ABS, the glorious WP suspension, the optional, two-way Quickshifter+, the multifunctional TFT display and the LED headlight. The optional “Track Pack” including launch control, spin adjuster, a track ride mode, freely configurable ignition mapping and anti-wheelie off function. Then, there is the optional “Performance Pack” to include motor slip regulation (MSR) and the Quickshifter+. The KTM MY RIDE smartphone and audio player integration comes now as standard. The optional anti-wheelie mode can disengage the anti-wheelie function of the MTC, and with the KTM RACE ON transponder key in your pocket, you can forget about ignition keys and mechanically locked fuel caps.

Further news and information on KTM models for 2019 will be announced on November 6 at EICMA in Milan, Italy.